As Eid Arrives, People in Kashmir Still Don't Know What the Future Holds

The government does not seem to be in the mood to lift restrictions placed on people in the Valley. 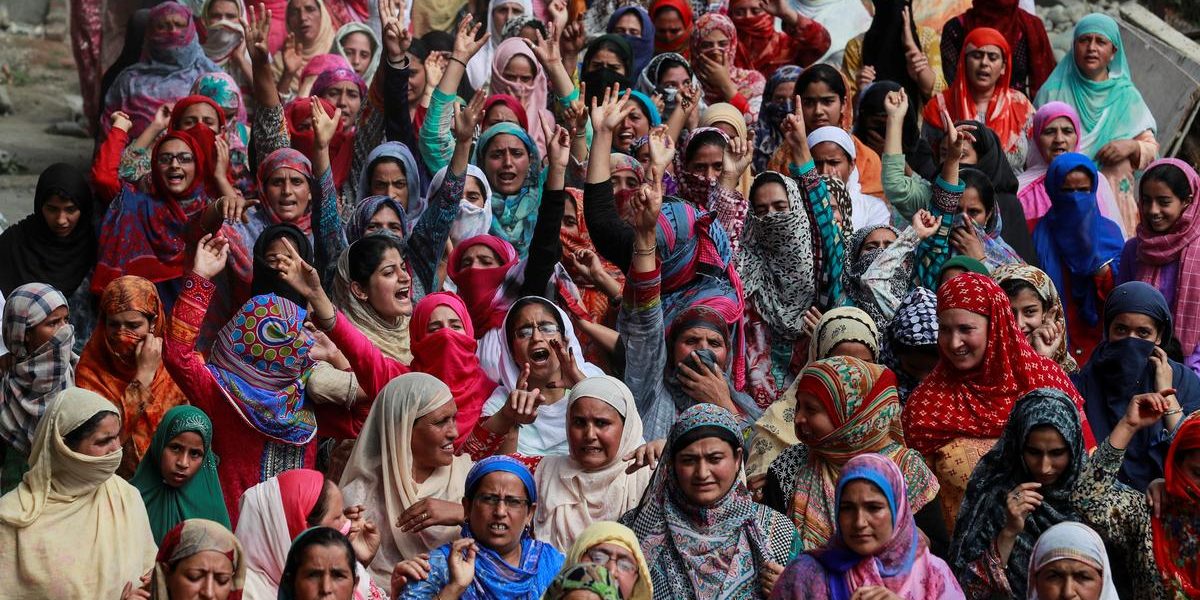 Srinagar: One question has been reverberating across the Kashmir Valley: What do the coming days hold? Answers, though, are hard to come by.

A deceptive calm hangs over the region after the government of India decided to strike down the special status enjoyed by Jammu and Kashmir under the constitution of India. Parliament voted to scrap Articles 370 and 35A, the two provisions which accorded a unique position to the state. In addition, Jammu and Kashmir was divided into two union territories – J&K and Ladakh.

The fate of more than 1.25 crore people was rewritten after the Centre launched a massive clampdown in the region, following more than a week of rumours of all kinds, and large-scale troops’ buildup. All means of communication – internet, mobile phones and landline services and even local cable network – remain blocked. Seven days on, the
Valley continues to reel under a curfew.

“An entire population has been denied their identity. I believe this bitter truth is yet to sink in among people,” said Rouf Hassan, a Kashmir University student who lives in the uptown Nowgam locality. But 28-year-old Hassan argued that the decision was expected, referring to the Bhartiya Janta Party’s poll promise that it would repeal Article 370 to “fully integrate” J&K with the rest of India.

On Friday and Saturday, Srinagar witnessed increased traffic movement, particularly in uptown localities. People came out to buy essentials and make preparations for Eid-ul-Adha, which is today (Monday, August 12).

Late on Sunday afternoon, however, the curfew was reimposed in the city, with announcements made on a public address system asking people to return to their homes. Shopkeepers were asked to roll down their shutters, creating panic.

A senior official from the administration asserted that this was a “precautionary measure”. The J&K director general of police, Dilbagh Singh, told a news channel on Sunday afternoon that the situation in Kashmir is “peaceful”. At the same time, national security advisor Ajit Doval, who has been in the Valley since August 5, has been travelling to different districts and interacting with people.

Hassan, like many youth The Wire spoke to, argued that it remains to be seen whether the decision on Article 370 will evoke a reaction in the days to come.

“There is certainly anger in the Valley and it is growing. It may take the form of protests or there may not be any immediate reaction at all. Instead, the situation may simmer and take another shape at some other point of time,” said Abrar Hussain, a resident of Dalgate locality in Srinagar.

Amidst the communication blockade, there is hardly any information coming to the fore about the situation on the ground in other parts of Kashmir, including the south, which was the epicentre of the 2016 uprising after Hizbul Mujahideen militant Burhan Wani’s killing. 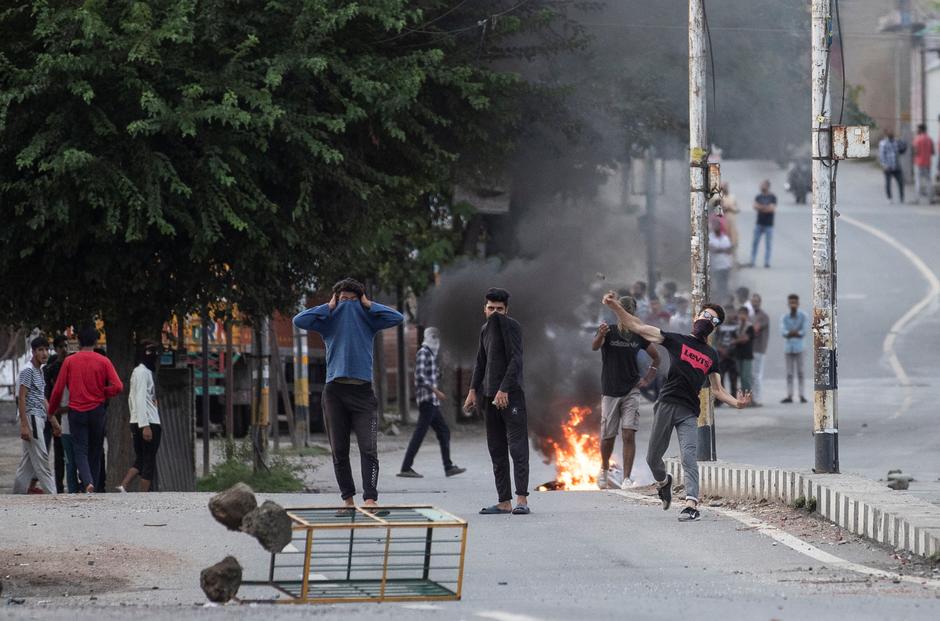 Kashmiri residents throw stones towards security forces during restrictions after the scrapping of the special constitutional status for Kashmir by the government, in Srinagar, August 10, 2019. Photo: Reuters/Danish Siddiqui

The government has also launched a massive crackdown on mainstream political leaders, who had repeatedly cautioned the Centre against scrapping Article 370. Apart from two former chief ministers, Omar Abdullah and Mehbooba
Mufti, who were arrested and taken to makeshift jails, close to 500 political leaders and workers have reportedly been detained or put under house arrest. This includes mid-level party leaders and zonal-level heads.

On Friday, “stone pelters” and a senior trade leader from Kashmir were arrested and sent to jail outside Kashmir “since there was no space in Valley jails”. Late on Friday evening, Kashmir High Court Bar Association president Mian Qayoom was arrested, along with some other persons, and sent to jail in Agra.

The current situation could raise the anger in the Valley, where people have been struggling to keep their day-to-day life going.

The day Union home minister Amit Shah introduced the bills in the Rajya Sabha to scrap J&K’s special position and reorganise the state, Nazir Ahmad Dar of uptown Chanapora brought out an old radio set from an almirah in his attic to listen to the news. While most men from the locality huddled in a room at Dar’s residence, young boys engaged the paramilitary troops in pitched battles on the road outside, less than 200 metres away.

“All of us felt choked up, the moment it was announced on the news. I could sense some kind of uneasiness on the face of every person was there,” said Dar. “In a stroke of a few hours, we had lost something precious that was guaranteed to us under the constitution.”

“Why this injustice?” he asked. “How do you expect people to react to it? Don’t you think people should react?” 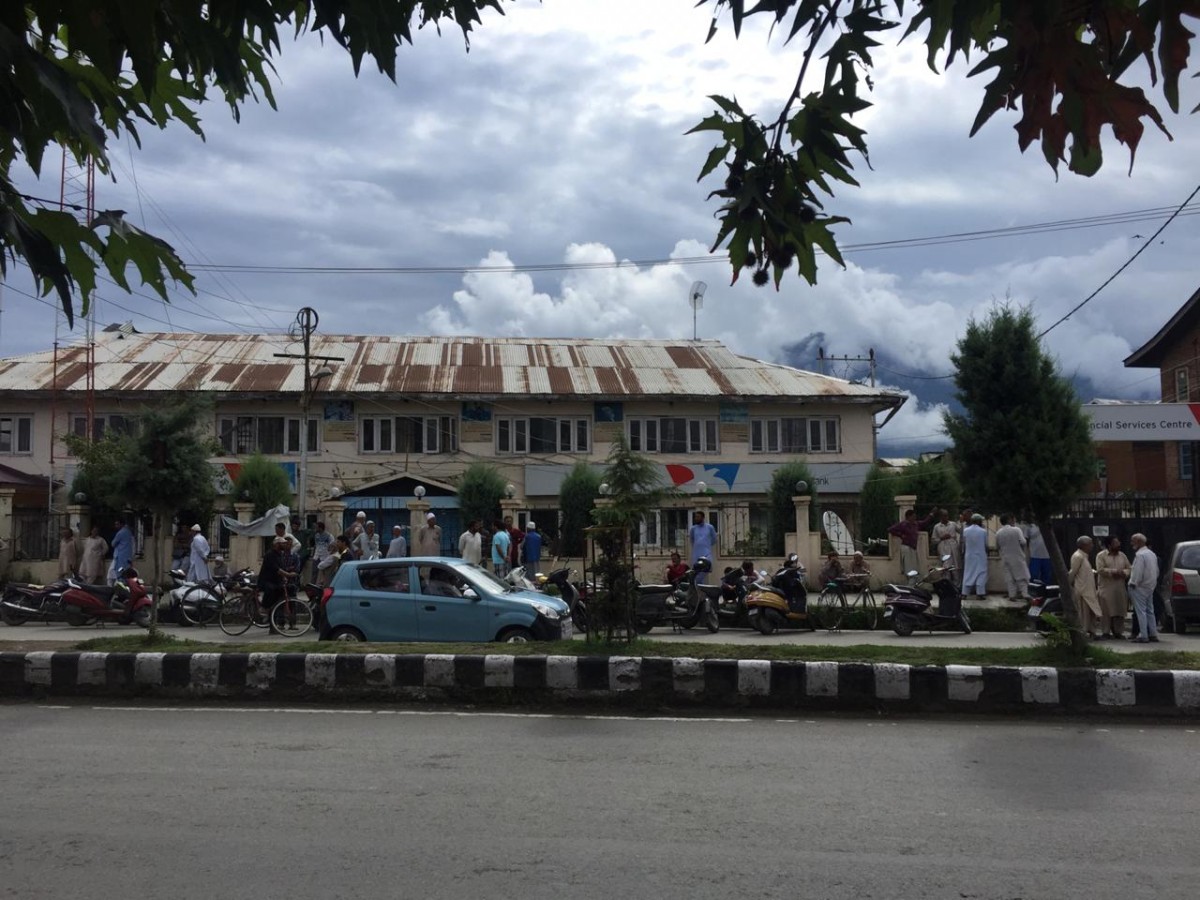 There are others like Khalid Hussain, though, who argued that Kashmiris have been fighting for their political rights for more than 30 years. “Scrapping Article 370 doesn’t change the disputed nature of the state,” he said.

Political voices in Kashmir have also spoken against changing Article 370. Bureaucrat-turned-politician and chairman of the Jammu and Kashmir People’s Movement, Shah Faesal described it as the “demise of democracy” in Jammu and Kashmir.

On Saturday, the National Conference moved the Supreme Court to challenge the Centre’s decision to scrap Article 370. The petition was filed by party MPs Hasnain Masoodi and Muhammad Akbar Lone.

As of now, it looks like the situation in the Valley has overshadowed preparations for Eid-ul-Adha, also known as Bakr Eid.

Will the government lift the restrictions on Eid? The senior official said the priority was not to allow people to assemble in large numbers as “it could lead to any situation.”

The government is also unlikely to allow Eid prayers at Jamia Masjid and Eidgah in Downtown, while the decision on allowing prayers at the Hazratbal Dargah is under consideration.

At a press conference, divisional commissioner Kashmir Baseer Ahmad Khan refused to reply to a question on whether the communication blockade and curfew will be lifted any time soon. Responding to another question. however, he said that 300 telephone booths will be set up across the Valley to help people reach out to their kin who are living outside the state.

While the administration has described this as a “pro-people” initiative, the decision could also be an indication that the authorities are in no mood to lift the restrictions. “The restrictions won’t go anytime soon. We don’t want to take any
chances and let the situation slip down a dangerous path,” the official said.

Additional director general of police S.J.M. Gillani, however, said the “restrictions will be eased as the situation improves”. “We are monitoring the situation and the decision will be taken accordingly,” said Gillani.