Easing will begin in areas that are "comparatively less sensitive from a national security, internal security, border security and public order standpoint". 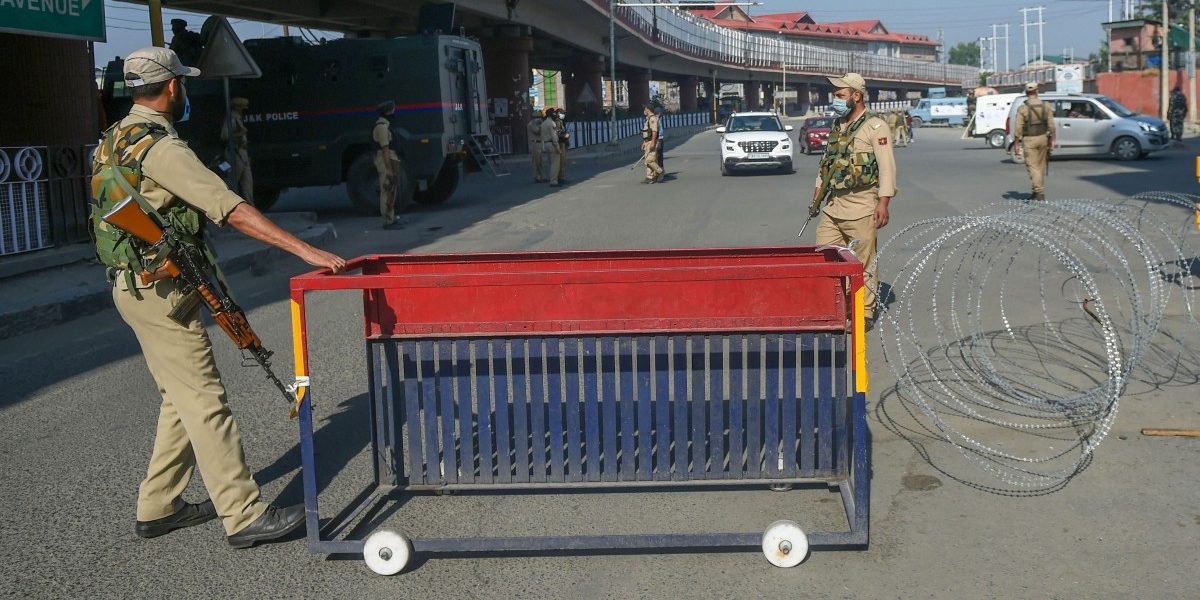 Security personnel place a barricade on a street during the restrictions imposed on the first anniversary of revocation of the special status of Jammu and Kashmir, in Srinagar, Wednesday, Aug 5, 2020. Photo: PTI

New Delhi: In its latest submission to the Supreme Court in the ongoing Kashmir 4G contempt matter, the Centre has said it will implement a “carefully calibrated easing” of the restrictions on high-speed mobile internet services in the Union Territory after August 15, beginning with specific regions.

A bench of Justices N.V. Ramana, R. Subhash Reddy and B.R. Gavai is hearing the contempt petition filed by the Foundation for Media Professionals (FMP). On July 28, the Centre had asked for the matter to be adjourned till August 7, and the bench agreed. The court will be hearing the case on Tuesday, and the Centre’s affidavit was filed on Monday evening.

The special committee headed by the home secretary, government of India, had been deliberating on the matter of restoring 4G services in Kashmir, the Centre’s affidavit says. These services were suspended on the night of August 4, 2019 and have remained unavailable for over a year, creating problems for people in Jammu and Kashmir. In the committee meeting, according to the affidavit, “the pros and cons of multiple options that are available were further considered keeping in mind the security of the nation, the border security, public security, etc.”

Since the “threat perception on the security front in Jammu and Kashmir continues to be high” and “restrictions are not posing any hindrance to COVID control measures, education programmes or carrying out business activities”, the committee reportedly found that the situation is not conducive to lifting the restrictions on high-speed internet completely.

However, “on trial basis”, the committee has said that “a carefully calibrated easing of some restrictions in limited and specified geographical areas” can be attempted. These areas would be ones that are “comparatively less sensitive from a national security, internal security, border security and public order standpoint”. No areas near the international border or Line of Control is to be included in this, the affidavit says.

That this easing will be a “trial” is mentioned repeatedly in the affidavit. State-level committees should look into the impact once a week, the Centre has said, and the Central committee will review the matter after two months (or before that if required).

At the start, the affidavit says, the change from 2G to 4G should be limited to one district each in Jammu division and Kashmir division. It also says because of “heightened threat perception”, no 4G services are to be allowed before August 15, and the easing will begin after that.

The Centre has said in the affidavit that given how the committee has been constituted and has thought through the matter, no case of contempt of court is made out. The petitioner’s claims that the Centre has not complied with the Supreme Court order in the Anuradha Bhasin case are “untrue and false”, the government has said. The contempt petition, the Centre has said, is therefore “misconceived”.

As The Wire has reported before, the FMP filed a contempt petition because there was a lack of information in the public domain about the functioning of the Special Committee. The Centre in its earlier counter-affidavit had claimed that the Committee held two meetings so far, on May 15 and June 10, but the minutes of the meetings were not annexed with the counter-affidavit.

The FMP claimed that contrary to the Supreme Court’s orders, the Centre was not making public the orders it was issuing to restrict high-speed internet in Kashmir. Because of this, no legal challenges to the orders were possible. In Anuradha Bhasin, the Supreme Court had held:

“Although the Suspension Rules do not provide for publication or notification of the orders, a settled principle of law, and of natural justice, is that an order, particularly one that affects lives, liberty and property of people, must be made available.  Any law which demands compliance of the people requires to be notified directly and reliably.   This is the case regardless of whether the parent statue or rule prescribes the same or not….In light of the same, it is imperative for the State to make such orders public so as to make the right available under Section 144(5) CrPC a practical reality.”

On August 5, 2019, before the Centre read down Article 370 of the constitution and revoked Jammu and Kashmir’s special status and statehood, all internet services – including mobile internet and broadband – were shut down completely. While 2G and broadband services have slowly been brought back, in stages, 4G mobile internet continues to be restricted in the Valley.