Explainer: Do Karnataka Rebel MLAs Have a Case to Press Their Resignation?

It is naive to ignore the fact that the rebel MLAs resigned from their assembly seats only to escape the rigours of the anti-defection law. 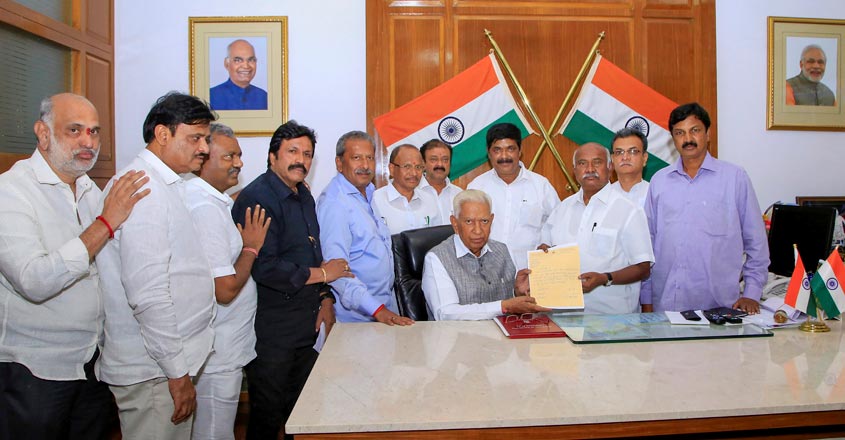 File image of rebel MLAs from JD(S) and Congress meeting with Karnataka governor Vajuibhai Vala at Rajbhavan, in Bengaluru on July 6, 2019. Photo: PTI

The Supreme Court bench comprising Chief Justice of India Ranjan Gogoi, Justice Deepak Gupta and Justice Aniruddha Bose on Thursday directed the Karnataka speaker to decide on the resignations  of the 15 MLAs of the Congress and Janata Dal (Secular) from the state assembly soon after they tender their resignations at 6 pm today.

The unusual order came after the senior counsel for the rebel MLAs, Mukul Rohatgi, submitted that the resignations require formal acceptance by the speaker, who he claimed is dilly-dallying. Rohatgi also alleged that the parties concerned are likely to issue a whip to these rebel MLAs to support the chief minister’s confidence motion, if it becomes necessary, so as to prepare the ground for their disqualification.

When Rohatgi expressed his surprise that the rebel MLAs can’t resign, so as to seek a fresh mandate from the people, rather than defect, CJI Gogoi said: “Nothing surprises us.” The bench also directed police protection to the rebel MLAs in Karnataka as they arrive from Mumbai (where they had taken refuge in a hotel) till they meet the speaker at 6 pm.

The Supreme Court’s direction to the speaker to decide on the resignations today itself is bound to raise eyebrows, if only because the speaker, under the proviso to Article 190(3)(b), has the power to reject a resignation, if he is satisfied that the resignation is not voluntary or genuine.

While the rebel MLAs’ grievance that they can’t resign easily did not surprise the bench, what ought to be of concern to everyone is how legislators can use their resignations from the assembly as an easily available tool to make the Anti-Defection Act unworkable.

Notwithstanding their claims that they wish to seek a fresh mandate from the people, it is naive to ignore the fact that the rebel MLAs in Karnataka have resigned from their seats in the assembly only to escape the rigours of the anti-defection law. A petition by the Congress challenging a similar strategy by a rebel MLA in Goa is pending in the Supreme Court.

The working of the Anti-Defection Act, under the Tenth Schedule of the constitution, since 1985, when it was enacted, has exposed a number of loopholes. The rebel MLAs in Karnataka, who are urging the speaker to accept their resignations from the assembly, are exploiting one such loophole, first put to test in Goa in 2017.

On March 14, 2017, the Supreme Court directed the Goa legislative assembly to conduct a floor test on March 16, 2017,  following reports that then chief minister Manohar Parrikar might not enjoy a majority in the newly-constituted assembly. The Congress had 17 members in the 40-member assembly. The Congress legislature party issued a whip directing its members to vote against Parrikar’s motion of confidence. A Congress member, Vishwajeet Rane, elected from the Valpoi constituency, took the oath of affirmation as MLA before the protem speaker, but left the House before the chief minister’s confidence motion was taken up. Abstention was a violation of the whip, and therefore, entailed disqualification under the Tenth Schedule.

On the same day, Rane submitted his resignation to the protem speaker, who accepted it. Rane was then inducted as a minister in the Goa government under Article 164(4) of the constitution, which says that a minister, who for any period of six consecutive months is not a member of the legislature of the state, shall at the expiration of that period cease to be a minister.

The Congress first challenged the acceptance of Rane’s resignation before the Goa bench of the Bombay high court, which dismissed its petition on October 11, 2017.  The Congress then challenged this dismissal in the Supreme Court through a special leave petition, which is pending.

In Goa, the Congress’s grievance was that Rane violated the party’s whip, and thereby incurred disqualification under the Tenth Schedule. In Karnataka, the Congress says the rebel MLAs incurred disqualification under Paragraph 2(1)(a) of the Tenth Schedule, which disqualifies a member of the assembly for voluntarily giving up his or her membership of the political party on whose symbol he or she was elected to the assembly.

In the Goa case, the Congress contended that the speaker, under the proviso to Article 190 (3) (b) of the constitution, is under an obligation to record his satisfaction as to the voluntariness and genuineness of the resignation prior to acceptance. Besides, the speaker, the Congress pointed out, is under an obligation to conduct an inquiry under the Tenth Schedule, before accepting the member’s resignation.

Watch: #BeyondTheHeadlines | As Congress Implodes From Karnataka to Goa, Its Leaders Remain Clueless

Rane had taken oath as the MLA before defying the whip issued by the CLP directing him not to abstain from voting on Parrikar’s confidence motion. Therefore, he had already incurred disqualification before he submitted his resignation.  The Congress’s failure to file a disqualification petition before the speaker, before Rane resigned, was cited by the high court as sufficient reason why the speaker could not have refused to accept Rane’s resignation. The Congress, however, contended that the high court ought to have exercised its jurisdiction under Article 226 of the constitution.

In Rajendra Singh Rana vs Swami Prasad Maurya (2007), the Supreme Court held that a member of a legislative assembly incurs disqualification by his or her mere act of defiance of the party whip, which may be subsequently declared by the Speaker. Therefore, the Congress submitted that Rane already incurred disqualification by the act of defiance of the whip.

More important, the Congress submitted before the Supreme Court that the disqualification of a member under Article 191(2) of the constitution is for a period of five years and not till he or she contests a by-election.  The high court’s conclusion to the contrary was challenged as erroneous.

The question that the Goa case raises is whether a person could continue to be a member of the legislative assembly, after suffering disqualification, on being reelected to the assembly through a by-election. If a person’s re-election through a by-election could erase the previous disqualification on the ground of defection, the object of the Tenth Schedule to the constitution would be defeated.

Can the 13 rebel MLAs in Karnataka claim that by resigning from the assembly, they did not voluntarily quit their party on whose symbol they were elected to the assembly? By resigning en masse from the assembly, the rebel MLAs have clearly strengthened the criticism that their resignations are not genuine, but motivated by their inclination to leave their respective parties in pursuit of lure of offices, offered by the BJP. If their objective is not to leave the party voluntarily, but only to quit their memberships of the assembly to make a larger political point, they should say so clearly.

Even in their petition filed before the Supreme Court, the rebel MLAs of Karnataka have explained their resignations from the assembly because they were “fed up with the maladministration” in the state. More important, they have not claimed that though they “voluntarily” quit their memberships of the assembly, they continue to be members of their parties.

Can one voluntarily quit the membership of the assembly in protest against maladministration by his or her own party leaders, without dissociating oneself from the policies and programmes of the party on whose symbol he or she was elected? Clearly, it is the dissociation which comes first, as a prelude to resignation from the assembly.

Supreme Court’s case law is in favour of the view that the term ‘voluntarily giving up membership of a political party’ mentioned in Paragraph 2(1)(a) of the Tenth Schedule as a ground for disqualification may be inferred from the conduct of a member inside and outside the assembly.

Therefore, if a question arises whether voluntary resignation from the assembly or “voluntarily giving up membership of the party” happened first, the speaker has the power to ascertain the facts as to the genuineness of a member’s claim.