In Jharkhand, the Elderly Struggle For Meagre Pensions

Beneficiaries of government pension schemes are burdened with issues like irregular pension payments, high collection costs and discontinuation of pensions due to Aadhaar-related issues.

Pensions for the elderly have been irregular under government schemes in Jharkhand. Credit: Surya Teja/Flickr CC BY 2.0 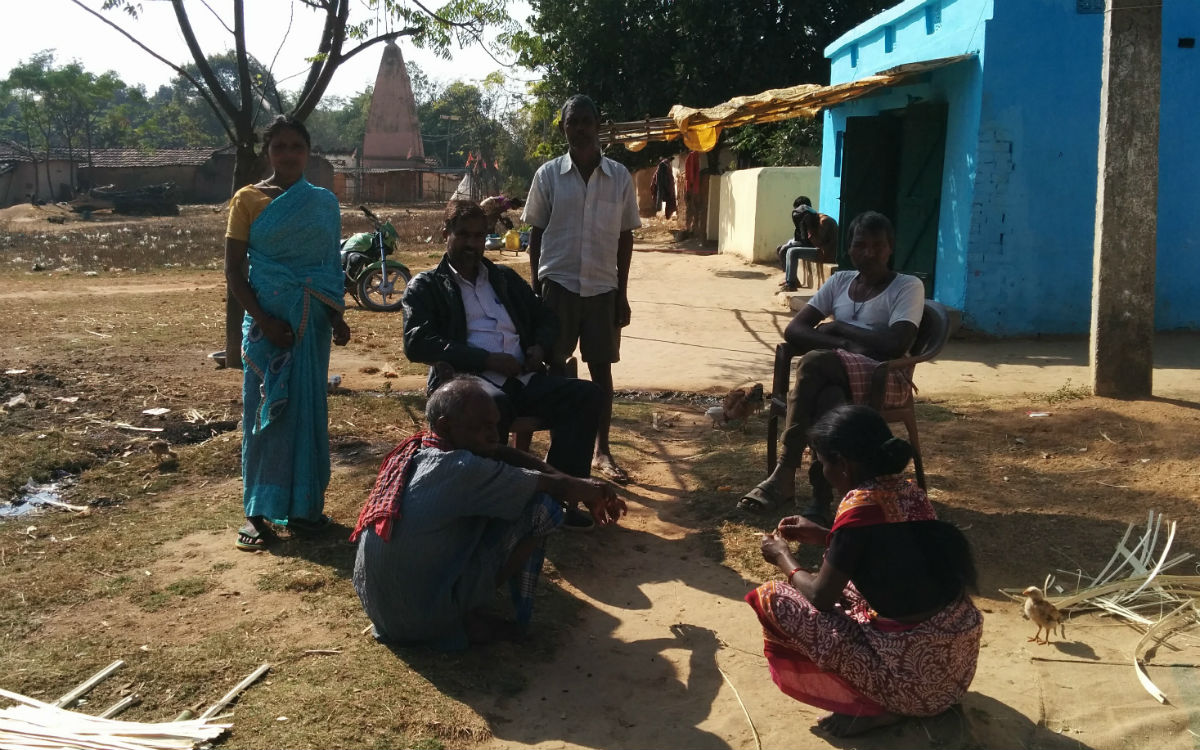 Villagers gather at a village in Jharkhand. Credit: Sambhavna Biswas

Aalo Devi’s life was greatly affected by the passing of her husband. While walking under the bright sun, she tells me softly that her son is deaf and doesn’t do any work at home. At night, when everyone is asleep, she drinks a few cups of hariya (country liquor) to drown her sorrows. Some of the elderly people I interviewed mourned, as did Aalo, the loss of family or a meaningful role within the community. Others were preoccupied by practical problems. Budhwa Munda narrated his story: “Gaddhe mein gir gaya tha aur pair tut gaya, ilaaj ke liye 80,000 mang rahe the. Kaha se la ye itne paise?” (I fell in a pit and broke my leg, they said the treatment will cost Rs 80,000. Where will I find so much money?)

The stories went on – some sad and others uplifting. The common thread is that the pensions that these old people and widows receive under the Indira Gandhi National Old Age Pension Scheme (IGNOAPS) and the Indira Gandhi National Widow Pension Scheme (IGNWPS) play a critical role in their lives. By the end of our conversation, Aalo Devi asserted, “agar pension nahi milega, toh mar jayenge hum” (If I stop receiving the pension, I will die).

I heard these stories during the course of a recent study of social security pensions delivered under the National Social Assistance Programme (IGNOAPS and IGNWPS) in the rural areas of Jharkhand’s Ranchi district. This involved a field survey in ten randomly-selected villages spread over five blocks of the district in February 2017. In each sample village, ten respondents were selected at random from the official list of pensioners.

The share of the elderly (above age 60) in India’s population has increased steadily over time (from 5.6% in 1961 to 8.6% in 2011), and is still rising. There are a 104 million elderly people in India, with women (53 million) slightly outnumbering men (51 million) and 71% of the elderly population residing in rural areas. In Jharkhand, elderly persons who are below the poverty line, or have an annual income below Rs 7,995 in rural areas, are eligible for a monthly pension of Rs 600 under IGNOAPS (the central government pays Rs 200 and state government adds Rs 400). This amount rises to Rs 700 for those above the age of 80. Widows between the ages of 40 and 79 years receive Rs 600 under IGNWPS. From the age of 80, they get an enhanced pension of Rs 700 per month under the old-age pension scheme.

As I travelled from village to village, pensioners were eager to share their experiences. Whenever I sat down to talk to one of them about her pension, other elderly women and men came out of their homes in large numbers to join the discussion. They answered my questions patiently and explained the problems they faced. Four key problems emerged – irregular pension payments, high collection costs, discontinuation of pensions due to Aadhaar-related issues and inadequate pension amounts.

A large majority of the respondents (84 out of 100) said that although they were receiving their pension money, it was not disbursed monthly and they did not when it would come. They were also not told the months for which they received their pensions. Their passbooks were difficult to read because the payments were irregular, lump-sum payments for several months were common and sometimes the entries looked incomplete. Further, 38% reported that they did not receive money for periods ranging between one month and eight months during the preceding 12 months. It was hard to tell whether the missing payments had somehow been siphoned off, or whether they reflected delayed payments, inaccurate recall or other issues. The irregularity of pension payments was a source of major confusion and added to their distress.

Since money is not credited to their bank accounts on a regular basis, pensioners visit the bank once every few months and often have to make several trips to collect their pension. The nearest bank is often far away and difficult to reach for the elderly. In Singarsarai village (Namkum Block), which is 30 kilometres from the nearest bank branch, pensioners have to travel the first 5-6 kilometres by foot before taking an auto rickshaw. They stand in the queue for an average of six hours and spend an average of Rs 60 per person on each trip. The cost is compounded if someone has to accompany them to withdraw the pension. Out of the ten villages I visited, only two had a bank branch within a three-kilometre radius.

All the respondents had an Aadhaar card. This is not surprising, since Aadhaar is now mandatory for social security pensions in Jharkhand. Concerned officials in Ranchi mentioned that around 1,200 pensioners in the district were recently removed from the system. On further investigation, I found that that all the 16 pensioners in the survey who were not receiving pensions despite having Aadhaar cards had issues related to “Aadhaar seeding”. Either their Aadhaar number was not linked to their bank account, or it had been linked to some other account, or there was a mismatch of names between the bank account and Aadhaar. While the purported intention of linking Aadhaar with pensions is to reduce leakages and ensure efficiency, the survey suggests that a number of pensioners stopped receiving a pension midway due to technical issues related to Aadhaar.

Pensioners value their pension money. It gives them power at home and an opportunity to spend on small comforts in life. Many said that they spend their pension on food and healthcare, and even share it with other members of the household. However, everyone echoed the same sentiment: “itne se paise me aur kya hoga?” (What more can I buy with this little money?).

The pension amounts of Rs 600 or Rs 700 per month are grossly inadequate by any standard. The central government has not increased its contribution of Rs 200 per month to old-age pensions for the last 11 years, despite prices going up year after year.

I did not find any fake names on the pension lists. Also, none of the respondents seemed to be ineligible. However, anecdotal evidence showed that many eligible persons (both elderly and widows) are yet to be covered under the pension scheme. They were not in my sample, since the respondents were selected from the list of pensioners, but I often met such people as I went along. Many said that they had filled the application form a number of times but had not heard back from the concerned authorities even after repeated enquiries. I showed one of the block officers a completed form and asked him if he would accept it. He pointed out that the person had not filled in her BPL number and that the application would therefore be rejected. There is no specific procedure to inform an applicant about the rejection; applicants will have to enquiry at the block headquarters to know the status.

Sambhavna Biswas is a student of public policy at the National Research University Higher School of Economics, Moscow.

The author would like to thank Jean Drèze and Inayat Sabhiki.