In Rural Jharkhand, Aadhaar Link to Welfare Schemes is Excluding the Most Needy

While transaction costs have increased in the PDS and vulnerable people are being left out of the government pension system after Aadhaar linkage, the benefits aren't clearly visible.

Note: This article was first published on July 18, 2017 and is being republished on September 26, 2018 in light of the Supreme Court upholding the constitutional validity of Aadhaar while striking down some sections of the Act. On linking Aadhaar with social welfare schemes, Justice A.K. Sikri said while delivering the majority verdict that though people being denied entitlements and rations because of Aadhaar-based technology was “concerning”, throwing out the whole Act on this basis would be “throwing out the baby with the bathwater”.

This is the first article in a two-part series on the impact of Aadhaar on welfare schemes in Jharkhand. The second part focuses on MGNREGA.

Manika (Latehar district, Jharkhand): Petitions questioning the government’s decision to make Aadhaar mandatory in social welfare schemes are being heard by a constitution bench in the Supreme Court on July 18 and 19. But while that happens, across the country, this linkage has become very much a part of people’s lives in the last year. Looking into how this had played out in Jharkhand, one question stands out – while the Aadhaar-related problems are apparent, where are the benefits?

Confusions in the PDS system

Between August and October 2016, Jharkhand moved towards adopting a ‘paperless’ public distribution system (PDS), linked to individual Aadhaar numbers. A person’s identity is to be authenticated at a ration dealer’s shop using their biometrics, a ‘point of sales’ machine then calculates what they are eligible for and the purchase is made.

The state decided to make the move to this biometric-authenticated PDS system in separate ways, depending on internet connectivity in different regions. The online system is meant for regions with strong internet connections. Once an Aadhaar-linked person goes to a ration dealer’s shop, the POS machine is used to ID them using their biometrics and if that works, they are given a receipt, asked for the payment and given the ration due to their household. The offline system seems to work almost exactly in the way the old register system did – except that instead of a register the dealer uses a POS machine and those without Aadhaar cards aren’t eligible to rations.

According to government data, more than 90% of the population in Jharkhand is registered in the Aadhaar system. While this is an impressive number at first glance, it seems as though the people excluded are often those who most need the PDS – the elderly who live alone, persons with disabilities and others who for some reason or the other were simply not able to get their card made.

Also read: After Supreme Court Verdict, What Needs to Be Linked With Aadhaar and What Doesn’t

In June 2017, IIT Delhi professor Reetika Khera, Ranchi University professor Jean Drèze and a group of student volunteers conducted a survey in the state to study how the introduction of Aadhaar has affected the PDS. Their initial findings suggest that 10-15% of the population, in most cases some of the most vulnerable, have been left out of the biometric identification system.

Corruption was also seen in some places at the moment of biometric authentication, Drèze added. While this was not very widespread, the few cases they witnessed prove that ration dealers can still game the system if they want to. “What they do is pretend that the authentication has not worked even when it has, processing the ration meant for the household for themselves instead,” he said.

“Transaction costs have definitely increased,” according to Khera. “People often have to make multiple trips in the same month because of connectivity problems or if the system is down.”

Shyama Singh, mukhia of the Namudag panchayat in Manika block, agreed with Khera’s assessment of the increased transaction costs. “We have so many complaints of people having to make repeated trips. But it’s not in our hands – this is the system now, and if a dealer says that authentification isn’t happening on a particular day or that there is no connectivity, there is nothing really we can do about it,” she told The Wire.

Before becoming mukhia, Shyama was a local activist working on better implementation of welfare schemes in this area known for its corruption. “Katauti (dealers cutting a person’s ration to keep it for themselves) used to be incredibly high in the area – out of 12 months, a family would be losing 3-4 months ration. After years of hard work from groups who were trying to increase awareness about the scheme and hold dealers and government officials responsible, we saw quite a significant change even before the introduction of Aadhaar. I think Aadhaar has decreased katauti further, but costs are also high – we don’t know how to help those who are being left out of the system,” she said.

Khera believes the findings of their survey suggests quantity fraud via ‘katauti’ is still continuing on a regular basis. The research team asked sample households from each district how much ration they received in May 2017 as opposed to the month before the Aadhaar-linked PDS system was put into place. In most cases, Khera says, the answer was identical.

In areas where people often had no official ID proof before, the introduction of the Aadhaar system has instigated new kinds of confusions. Byjathi’s household, living in Mandhaniya village in Jharkhand’s Manika block, has 12 members listed on their ration card. Before the Aadhaar linkage, Byjathi said he had a good relationship with his dealer and would get the entire ration due to them (60 kg rice, for instance, as the household has a priority ration card) on most months. “Only some months we would get 2-3 kg less,” he told The Wire. 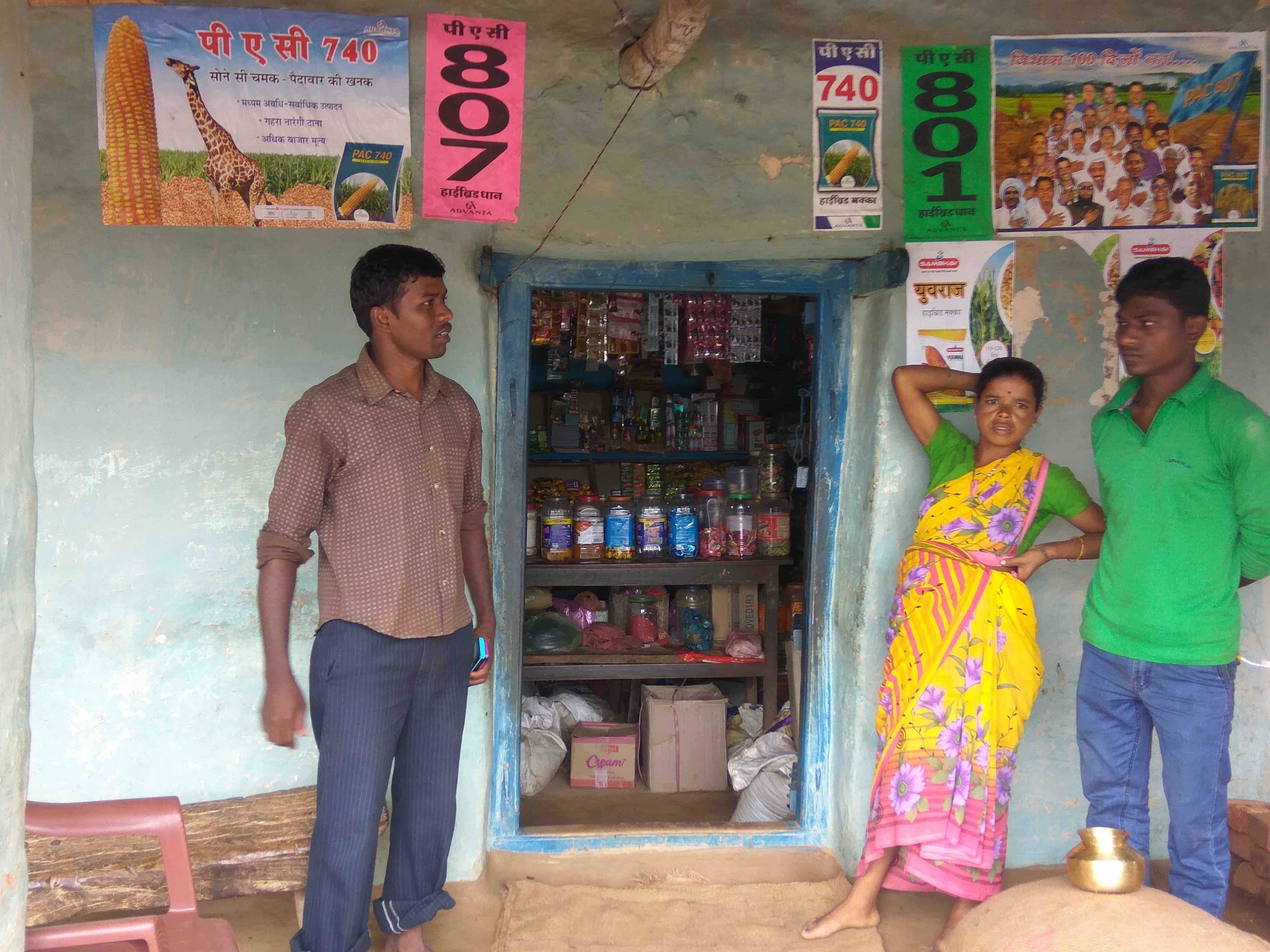 Byjathi and his wife outside the store they run. Credit: Jahnavi Sen

“He has known our family for years, he has seen Sundari so many times,” Byjathi said. “But he has still cut her out of our ration entitlements. Now we’re trying to figure out which card to get her name changed on. Her fingerprints match and everything, but still we’re not getting the ration due to her.”

Speaking to The Wire on the phone, the family’s ration dealer Nirmal Oraon said he was “just following the rules”.

‘No Aadhaar, no pension’

Hansraj Oraon also lives in Mandhaniya village, and is known to his friends and family as Surdas. Close to 30 years old, Surdas is blind and eligible to a monthly government pension of Rs 600. He lives alone, but his neighbours help him out whenever they can.

When he first heard of the Aadhaar project, Surdas was eager to enrol, like many others in his village.

“I first made a trip to a centre to try and apply for an Aadhaar card in late 2009,” Surdas told The Wire. “But they looked at me, realised they wouldn’t be able to do a retina scan and turned me away. They told me to try at a different centre. But this happened again and again at different centres, using different excuses. It became harder for me to keep going – someone always had to go with me. So after a while I stopped trying.”

Then, in 2015, his pension stopped coming in – “No Aadhaar, no pension,” he was told at the bank. He then decided to try again to enrol; without his pension, it was difficult for him to fend for himself. Around October 2016, his ration dealer stopped providing him with ration and allegedly confiscated his card (something that is well beyond a dealer’s duties), saying he would return it once Surdas gets an Aadhaar card.

Running into the same problems all over again while trying to enrol, in November 2016 Surdas went to Latehar, the district headquarters. There, he says, an official told him that his enrolment was complete – all he had to do now was go back to his local centre and ask them to print out the card for him. Relieved, Surdas headed back home. But when he got to the local centre the next day, he was told his record was nowhere to be found.

After another cycle of running from pillar to post, Surdas says he finally received his Aadhaar card on June 30. “I haven’t yet taken it to the bank,” he says, after he proudly brings his card out, “but I hope that as soon as I do, my pension will be sorted out and my ration too. I don’t want to keep asking others for help.”

An official working in the Latehar collector’s office, on the condition of anonymity, told The Wire that they were aware that there had been glitches in implementation of certain policies. “This system is completely new to all of us, so yes it is taking some time to get used to. Maybe these teething problems are taking a little longer than we thought, it’s true that we get a lot more complaints than we expected. But we’re hoping it will settle down soon, as everyone gets more comfortable with what is happening,” the official said.