The abolition of the Big Land Estates Abolition Act 1950 clears the decks for the revival of a neo-jagirdari system in J&K, say experts, geared this time towards serving the needs of big business. 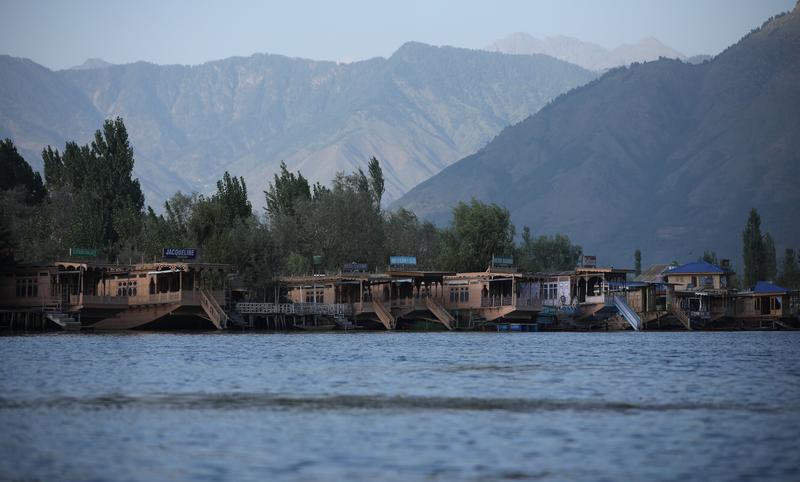 Srinagar: The Centre on Tuesday notified the Union Territory of Jammu and Kashmir Reorganisation (Adaptation of Central Laws) Third Order, enabling a host of new changes to the former state.

Under the new arrangements, no domicile or permanent resident certificate is required to purchase non-agricultural land in the UT. The Union home ministry has also notified the Real Estate (Regulation and Development) Act, 2016, paving way for the acquisition of land in J&K by all Indian citizens. Previously, article 35-A of J&K Constitution, watered down on August 5, 2019, placed prohibitions on the sale of land to those who were not state subjects.

The latest order also empowers the government to declare any area in J&K as ‘strategic’ and intended for the direct operational and training requirement of the armed forces at the behest of an army officer of or above the rank of a corps commander.

If all of this is part of the BJP’s long-standing agenda of ending J&K’s ‘special status’, there is another change that many in the rest of India may not realise the significance of: the government’s order has also abolished the historic Big Land Estate Abolition Act, 1950 – under whose aegis the former state witnessed the radical redistribution of land which paved way for rural prosperity and ended landlordism in J&K.

The fresh enactments have provoked anger in the Union Territory, where suspicions abound that the Centre is gradually disempowering the local population and consolidating control through untrammelled executive power. For more than two years now, J&K has been without an elected government. All the changes being introduced in the UT have been steamrolled by Centre rather than being legislated by elected representatives of the people.

The sale and ownership of land has been a fractious political issue in the former state. The fresh notifications also allow for spouses of individuals who become domiciles to be deemed as domiciles, further liberalising the criteria for acquiring residency permits in the UT.

“The changes represent the operational aspect of the big measure taken in August last year,” said Sheikh Showkat Hussain, a Kashmiri political analyst. “They have taken the repealing of Article 370 and 35-A to its logical conclusion. It was bound to happen. The order is very long. It will take time even for experts to parse through it before they finally wrap their minds around the kind of alteration that has been wrought. But prima facie, the changes enunciated in the order seem to correspond to the larger objectives being plotted with respect to the demographics of J&K.”

Also read: Kashmir: Labourers Claim They Were Forced to Swell the Audience at Army-Organised Mela

Political parties across the spectrum have strongly denounced the new changes. “The new land laws are unacceptable to us,” Omar Abdullah told India Today. “Basic protections that are available to similar states like Himachal Pradesh haven’t been given to us. Nobody can buy land there and in numerous other such states. J&K has been put up for sale. They want to alter the character of this place. In a federal structure, they cannot overrule the people of J&K. This is not a dictatorship. They have betrayed the people of Ladakh as well. Look, how they have brought these laws soon after the completion of the LADH elections. If they had done it before, they would have never won there.”

While there were already apprehensions about land acquisition being thrown open to outsiders, what has taken Kashmiris by surprise is the abolition of the historic land to tiller Act. “The repeal of the Big Estates Abolition Act – the first ever agrarian reform in the subcontinent – is an insult to the sacrifices of thousands of freedom fighters and farmers who fought against autocratic and oppressive rule and a crude attempt to rewrite history,” said Sajad Lone, spokesperson for the People’s Alliance for Gupkar Declaration, a conglomerate of mainstream political parties committed to the reversal of the scuttling of Article 370. “The order made in exercise of powers under the Reorganisation Act, 2019, it is stated, is yet another brazen violation of the principal of constitutional propriety of fundamental importance to a constitutional democracy.” 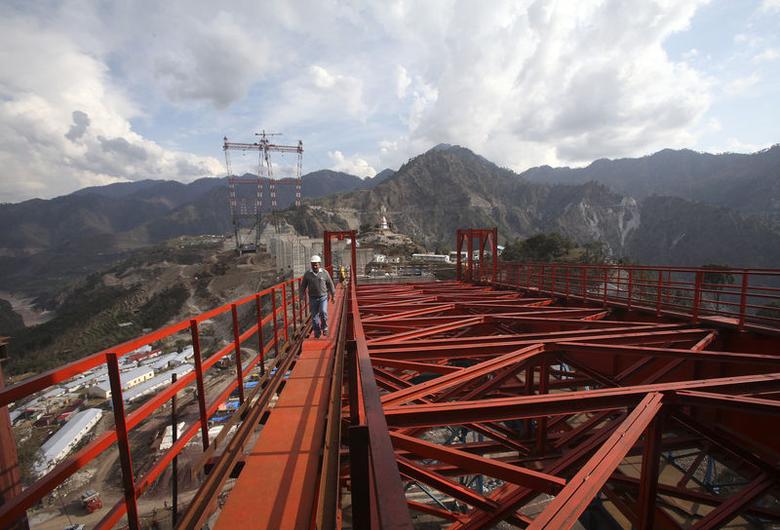 An engineer walks on an iron structure at the construction site of a railway bridge in Kouri in Reasi, Jammu and Kashmir, March 4, 2015. Photo: Reuters/Mukesh Gupta

The land redistribution programmes implemented in the 1950s in J&K were touted to be most radical in any non-communist state.

The reforms marked the fulfilment of key objectives enshrined in Sheikh Abdullah’s Naya Kashmir programme. The Big Land Estates Abolition Act placed a maximum ceiling of 22.75 acres on land holdings. Proprietors could, however, retain orchards and fuel and fodder reserves. Land exceeding this limit was automatically transferred to the tiller, who was not supposed to pay any compensation to the original owner. Consequently, more than 9,000 proprietors were divested of their excess land in J&K

By 1952, 790,000 landless peasants, mostly Muslims, were conferred with proprietary titles including 250,000 lower caste Hindus in Jammu region. Sheikh Abdullah enacted the Agrarian Reforms Act in 1976 to further rationalise land ownership in J&K.  The success of the reforms is evidenced by fact that of the 9.5 lakh acres of land distributed throughout India until 1970, 4.5 lakh acres – nearly half of it – were distributed in J&K alone.

Wolf Ladjensky, an agrarian expert has observed that, “whereas virtually all land reforms in India lay stress on elimination of zamindari system with compensation, or rent reduction and security of tenure (for tillers), the Kashmir reforms call for distribution of land without compensation to erstwhile proprietors… (and) whereas land reforms enforcement in most of India is not so effective, in Kashmir the enforcement is unmistakably rigorous.”

It was the erstwhile Dogra state’s land policies that spurred a whole movement for land redistribution and other civil rights waged by Muslim agitationists in the 1930s. The Dogras had made religious affiliation a basis for access to state resources in Kashmir, placing Hindus in a position of privilege.

In 1862, Ranbir Singh introduced the system of zer-i-niaz-chaks (grants on easy terms of assessment) in an effort to extend cultivation on fallow lands. In 1866, another kind of chak granted on even more favourable terms was introduced in Valley. Known as chak hanudis, they were granted on conditions that beneficiaries will not employ cultivators of Khalisa or state land and that they would ‘remain Hindus and accept service nowhere else.’ In 1880s, a new category of chaks called mukarraris were granted on even more generous terms. They were also intended as grants to Hindus since one of the conditions imposed was that the ‘holder (remains) loyal to the state and true to his caste.’

Also read: Stories of Magical Saints Keep Up the Spirits of Villagers Along the Line of Control

Starting in 1877, Ranbir Singh created service grants for Dogra Mian Rajputs with an objective of encouraging them to settle in Kashmir so that the maharaja has a ‘certain body of his own people ready at hand in event of any disturbances in the valley.’ As settlement commissioners Andrew Wingate, Walter Lawrence and JL Kaye would later observe in their respective reports, the terms on which these grants were issued were violated with impunity by the Dogra state’s revenue officials, the majority of whom were non-Muslims (Kashmiri Pandits and Dogras) and who went on to amass huge tracts of land through graft and other illegitimate means. In 1948, Sheikh Abdullah abolished 369 such jagirs involving an annual land revenue assessment of Rs 566,313. In October 1948, his government amended the State Tenancy Act through which 6,250 acres of Khalisa or state owned land was distributed to landless labourers free of cost.

The transformative potential of the 1950s reforms unfolded within years after they were enacted. The fact that J&K fares exceptionally well on most development indices is proof of the success of these reforms.

“The key aspect of the Land Estates Abolition Act was the ceiling it placed on the land holdings which is now gone after its revocation,” said Altaf Hussain Para, a Kashmiri historian. “The annulment practically clears the decks for the revival of a neo-jagirdari system in J&K but in some different form. The land reforms had overturned the feudal nature of Kashmir and reoriented the former state in line with the socialist vision of Sheikh Abdullah. Now J&K is primed for capitalist exploitation. Big businesses can rack up as much land as possible. Though the full contours of the latest changes are yet to emerge, I believe the cap on land holdings should have stayed.”

The new changes are significant given the febrile state of the Kashmir valley at the movement. The J&K administration has disallowed any kind of protests, overzealously policed online spaces for dissent, undermined press freedom, continued detaining people who have taken part in demonstrations and threatened government employees with dismissal if they voice “anti-national” opinion. Recently, the J&K administration announced it can retire employees who have reached the age of 48 years, sparking off speculation that employees dissenting with the political view of state might be declared as “deadwood and axed” without the matter going to courts or tribunals.

“Basically, the Central government is tearing down all symbols on which the identity of Kashmiris has historically rested,” says Kashmiri political scientist Noor Ahmed Baba. “It’s a complete undoing of seven decades of politics and reforms. This is bigger than what happened on August the 5th last year. Earlier, people were just ambivalent about things. Now everything is clear. The steps pose a serious challenge to both the ethno-cultural complexion of J&K as well as to the political aspirations of those living in Kashmir. But before affecting Kashmir, it threatens to overwhelm Jammu.”

Given the unsettled security situation in the Valley, most observers here believe Jammu is likely to see a greater scramble for land by businesses and investors from other parts of India than Kashmir.

Note: In an earlier version, the British era settlement commissioner Wingate’s first name was incorrectly mentioned as Arthur. It is Andrew.