According to a RTI, cases in J&K have seen the least amount of compensation being offered for rights violations while Assam has the most. 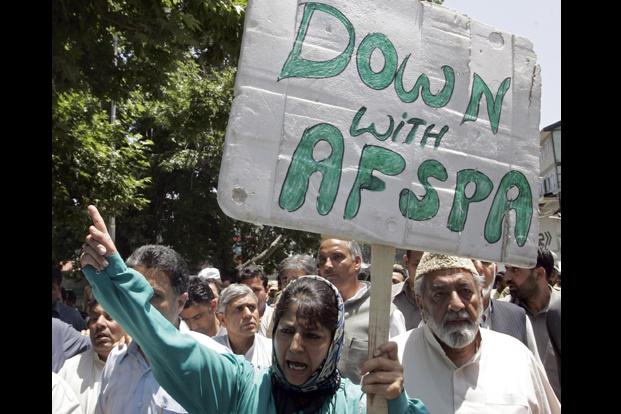 Jammu and Kashmir has been one of the most vociferous opponents of AFSPA due to human rights violations. Credit: Reuters

At a time when the media has reported that there is a likelihood of the Armed Forces (Special Powers) Act, 1958 (AFSPA) being withdrawn from certain parts of Arunachal Pradesh and adjoining parts of Assam, an RTI activist has pulled out some revealing data from the ministry of home affairs (MHA). The data shows that over the last three-four years, the maximum number of complaints of human rights violation have come from Jammu and Kashmir.

Venkatesh Nayak of the Commonwealth Human Rights Initiative said according to the official figures supplied by the MHA, out of a total of 186 complaints of human rights violations received against the armed forces (defence forces and paramilitary forces) deployed in the seven states where AFSPA was imposed – Assam, Arunachal Pradesh, J&K, Manipur, Meghalaya, Nagaland and Tripura – during a period of a little over three years, from 2012 to January 2016, J&K accounted for 49.5% of the complaints.

Of these complaints, he said, by January 2016, more than two-thirds or 127 to be precise, had been disposed of. “The data supplied by MHA under RTI does not indicate whether these complaints were found to be true or false. Perhaps this is because of the manner in which the queries raised in the Lok Sabha were drafted. They only sought information about the receipt and disposal of complaints rather than the manner of their disposal. Interestingly, more than 57% of the complaints of human rights violations received from Assam are shown as pending,” the activist said.

12 categories of complaints received by MHA

As for the nature of the complaints, he said, they have been classified into 12 categories of human rights violations, ranging from “abuse of power” to “causing deaths”.

“The most number of complaints seem to have been received against the defence forces rather than the central paramilitary forces such as the CRPF, Assam Rifles, etc. deployed in the seven states,” Nayak said.

Pointing out that about 40% of the complaints were clubbed under the category of “defence forces,” without any detailing of their nature, Nayak said when the distinct categories of “death in army encounter” and “death in army firing” are added, the proportion of such complaints received against the defence forces goes up to more than 61% of the total.

10 complaints of abduction and rape

The most serious charges levelled against security forces are of abduction and rape. Such crimes not only diminish the respect for the forces, but also alienate the citizens in the states where they occur. However, data provided by MHA does not specify whether these crimes were committed by the defence forces or the paramilitary forces deployed in the seven states.

“50% of these cases are said to have been received from Assam alone – four of which were sent in 2015-16 (up to January) – all of which are shown as pending. Overall six of the ten cases received were not disposed of until January 2016. The current state of these complaints is not known. In the remaining cases of rape that were disposed of, the data does not indicate the manner of disposal,” Nayak said.

As for the compensation paid for the violations, he said that the MHA data shows that monetary relief to the tune of Rs. 6.47 crores was recommended in 117 cases during this period. “It is not known whether this was ex gratia relief granted or compensation awarded. Further, it is not known how many complainants or victims actually received the monetary relief and which government (central or state) made the payments,” he said, adding that therefore it needs to pointed out that while ex gratia payment is only an interim relief, compensation amounts to admission by the state that the perpetrators were indeed guilty of committing these human rights violations.

As of May 4 this year, AFSPA was reimposed for a period of three months in the districts of Tirap, Changlang and Longding in Arunachal Pradesh, and in the adjoining areas of Assam falling within the jurisdiction of nine police stations or police outpost. As AFSPA remains imposed in Meghalaya and Nagaland as well, Nayak said the purpose behind revealing the MHA data is to provide a “larger picture of the number of complaints of human rights violation as they include data pertaining to the actions of paramilitary personnel as well.”

Besides, he said, the Supreme Court is currently hearing a case involving more than 1,500 complaints of human rights violations committed by the defence forces and the paramilitary forces operating in Manipur alone.

Nayak, who filed the appeal in April this year, as a follow up to a query posed by five Lok Sabha MPs on December 8, 2005, said information was provided to him by the Central Public Information Officer of the MHA within 30 days, free of charge. However, he said, he was not sure if this information had been tabled in the Lok Sabha.