The order was issued by the assistant director, food, civil supplies and consumer affairs of north Kashmir’s Bandipora district. 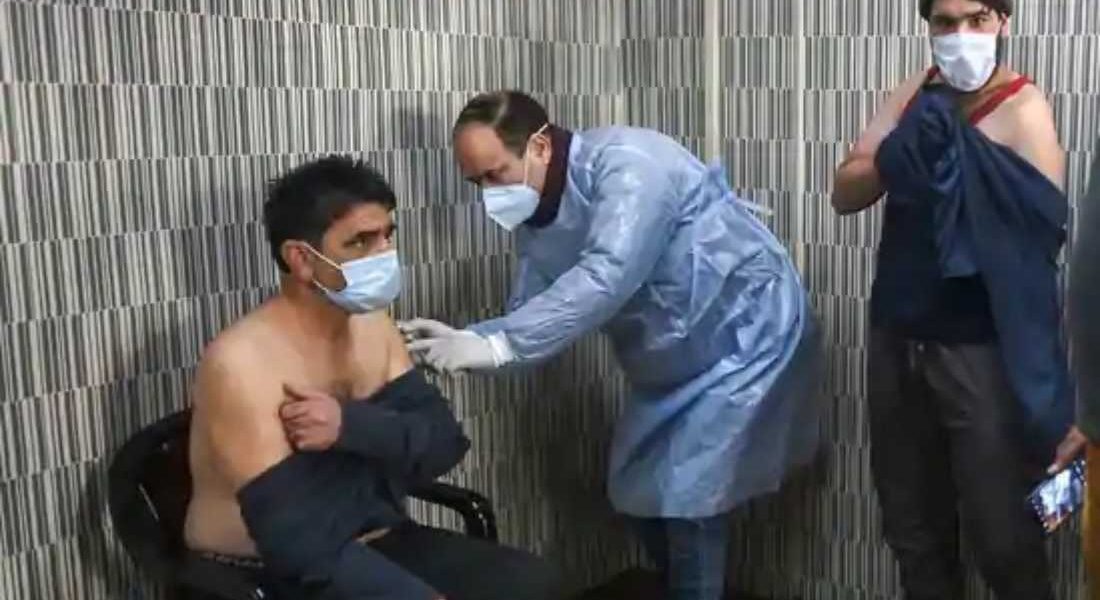 Srinagar: The Jammu and Kashmir administration on Monday issued a controversial order, making it mandatory for people above 45 years of age to get vaccinated against COVID-19 for availing ration at government-run stores.

The order, which evoked mixed reactions from Kashmiri netizens, was issued by the assistant director, food, civil supplies and consumer affairs of north Kashmir’s Bandipora district.

“All those consumers whose age is 45 years and above are informed that they shall vaccinate themselves against Covid-19 at the nearest Covid-19 vaccination centre and fetch your ration accordingly,” the order said.

“Please remember that without producing Covid-19 vaccination certificate, ration will not be issued in any case,” it added.

However, there was an instant public backlash on social media with netizens mocking and criticising the government for ‘forcing’ people to take a vaccine.

“These are arm-twisting tactics. Who will take the responsibility if a person dies after taking the vaccine? They (government) should first vaccinate their family members first before forcing people to do so,” Aqib Manzoor, a research scholar at the Department of Physics, University of Kashmir, wrote on Facebook.

However, some netizens argued out that the order, “though undemocratic”, was meant for the larger public good, “At least people will take the vaccine and protect themselves and others from contracting the infection,” Arshid Ahmad, a businessman in Srinagar, said about the order.

Sensing trouble, the government recanted the order within hours.

“The public notice…wherein it was inadvertently made mandatory for persons aged 45 and above to vaccinate themselves against COVID-19 for the collection of ration, is hereby withdrawn ab-initio,” the assistant director said in another order.

So far, Jammu and Kashmir has recorded 1.3 lakh infections with over 2,000 fatalities reported due to the virus since the pandemic broke out in March last year.

In line with the national trend, there has been a spike in new infections lately, prompting the administration to shut schools again. Schools had opened after nearly two years following the abrogation of J&K’s special status.

The vaccination against COVID-19, which has taken nearly three million lives globally, started in Jammu and Kashmir on January 16 this year. While the healthcare workers and other vulnerable sections were a priority in the beginning, the vaccination drive was later extended to include senior citizens.

So far, over six lakh people have been vaccinated in Jammu and Kashmir, Dr Saleem added. However, many Kashmiris are reluctant about taking the vaccine due to a number of factors and conspiracy theories.

Sheikh Showkat, a former faculty member at the University of Kashmir, said the Indian version of the COVID-19 vaccine has a “bad reputation”. Brazil’s drug regulator, for instance, has rejected Bharat Biotech’s application to import Covaxin for distribution. The body believes the company hasn’t following good manufacturing practices at its Indian facilities.

The clinical trials for Covaxin are still underway. “Kashmiris feel they might be used as guinea pigs for human trials,” Showkat, who taught law also at the Central University of Kashmir, said.

Dr M. Salim Khan, who heads the department of Social and Preventive Medicine at Srinagar’s SMHS hospital, admitted that there are fears related to the vaccine among the people.

“I took it. My family took it. People are coming up. The vaccination is speeding up over time,” Dr Khan said.

The controversial order of a senior officer in Bandipora is one of the many similar diktats that have been issued in the recent past by different departments of the J&K administration to inoculate employees against the novel coronavirus.

In the newly created union, the “credibility crisis” faced by the ‘made-in-India’ COVID-19 vaccine has prompted the administration to issue sweeping orders in order to get its six-lakh plus strong work force inoculated against the deadly virus.

As fears and rumours of vaccine’s inefficacy spread, the J&K’s health, education, social welfare and other departments have threatened to withhold the salary of their employees who didn’t get vaccinated against infections of the novel coronavirus.

“Our salaries were withheld and we were ordered to take the shot first. Although I didn’t take the vaccine, I managed to get a certificate stating that I had taken it after which my salary was released,” said an employee of J&K’s social welfare department.

Dr Nisar-ul-Hassan, president of Doctors Association of Kashmir, said the “vaccine hesitancy” is a “cause of concern” which can hamper efforts of J&K administration to prevent the spread of the infection. He said 99% of J&K’s population has not been fully vaccinated yet.

“Last month, we found that around 80% of doctors and healthcare staff were opting against getting the vaccine. If they behave like this, what should we expect from common people?” Dr Nisar, who is a leading influenza expert, said.

“People are hesitant due to the misinformation being spread against the vaccine. If the government doesn’t take immediate measures to speed up the vaccination, the virus will continue to spread,” Dr Nisar added.

Governments around the world are following different approaches to vaccinate populations against COVID-19. Some, like Australia, have made the vaccine mandatory for people, while the vaccine is still optional in many countries, like the US.

“Article 25 grants freedom of conscience and religion, subject to public order, morality and health. Since any pandemic constitutes health hazard, people can be forced to go for genuine vaccination, not trials of vaccine,” Showkat said.