J&K: How the BJP U-Turned on Tribal Empowerment After Article 370 was Read Down

In 2017 and 2018, the party’s state unit had opposed key initiatives that aimed to safeguard tribal rights. But it quickly changed its stance when Union laws became applicable to the erstwhile state. 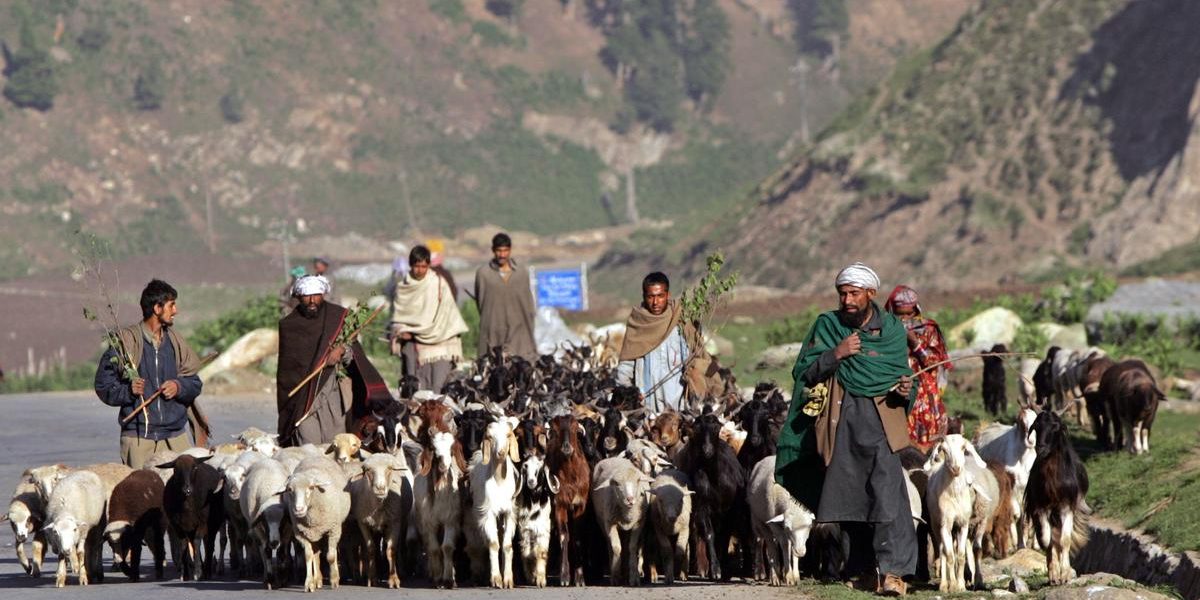 Bakerwals walk with their livestock in Sonamarg, Jammu and Kashmir. Photo: Reuters

Srinagar: On Monday, September 13, when Manoj Sinha, the lieutenant governor of Jammu and Kashmir, handed over certificates of individual and community rights to the people of the Gujjar-Bakerwal and Gaddi-Sippi Scheduled Tribes as part of a ceremony to implement the Scheduled Tribes and Other Forest Dwellers (Recognition of Forest Rights) Act in J&K, local people with keen memories found several ironies in the situation.

That was because, while the Bharatiya Janata Party (BJP) has been projecting itself as the saviour of tribal communities in J&K since the BJP-led Union government unilaterally read down Article 370 on August 5, 2019, and changed the state’s status to that of a union territory, the party appears to have forgotten that it had vehemently opposed key proposals that had aimed to safeguard and empower the very same communities when it was in power in the state between 2015 and 2018 in alliance with the People’s Democratic Party (PDP).

In fact, the BJP members of the state government had even used the then state’s special status conferred by Article 370 of the Constitution of India to oppose some of these proposals.

The BJP’s opposition in 2017 and 2018 to proposals ranging from the tribal policy to enacting the then state’s own Forest Rights Act (FRA) scuttled key initiatives mooted by the tribal affairs ministry to safeguard the rights of Gujjars and Bakerwals.

These predominantly Muslim tribal communities have historically faced injustices in J&K since the time of Partition, including attacks, evictions and displacements. According to the 2011 census, 86.3% of the Scheduled Tribes in J&K (which at that time also included Ladakh) are Muslims.

The creation of a Ministry of Tribal Affairs had been part of the Agenda of Alliance, the common minimum programme worked out by the PDP and the BJP to share power in the state when the two parties allied in 2015, after the 2014 elections.

But although the BJP had agreed to the creation of the ministry, which was formed in 2015, it opposed the tribal policy when it was placed before the cabinet in December 2017 for approval.

The tribal policy had proposed a multi-pronged approach for the all-round development of tribal communities in Jammu & Kashmir without affecting their culture and identity.

According to news reports at the time, the BJP ministers had opposed the policy by claiming it would wreak havoc on the forests in the state. They had also opposed a provision in the policy that sought the regularisation of tribal community settlements on state-owned land.

“The coalition partner did not agree to the proposal,” Choudhary Zulfikar Ali, the then tribal affairs minister, told The Wire.

The stalemate between the two ruling parties on the issue eventually led to the formation of a cabinet sub-committee headed by Nirmal Singh, the BJP leader and then deputy chief minister, to iron out differences in opinion and come to an agreement. But despite several reminders in writing from the tribal affairs ministry, no meeting of this sub-committee was ever held, said Zulfikar, who had been a minister from the PDP quota in the coalition government.

A year before the Union government read down Article 370 on August 5, 2019, the BJP had openly voiced its opposition to the enactment of a Forest Rights Act in the state or an extension of the Centre’s FRA to J&K.

“Special status has saved our forests; otherwise they would have been finished long ago. If something good is coming from the country, we have the right to implement it in the state. But something that doesn’t suit us can ruin this state,” Lal Singh, who was then associated with BJP and had been the state’s forest minister, had told a news channel in February 2018.

The meeting on the issue held on February 14, 2018, had been chaired by the then chief minister Mehbooba Mufti herself. “The Home and Forest departments were asked to expedite comments on the Schedule Castes and Scheduled Tribes (Prevention of Atrocities) Bill, and the Scheduled Tribes and Other Forest Dwellers (Recognition of Forest Rights) Bill,” says the record of this meeting.

But this record itself is the subject of controversy. It triggered serious differences between the PDP and the BJP when the latter claimed that certain decisions recorded in the document had not been taken during the meeting.

According to the minutes of the meeting, Mufti had directed the officers “not to disturb or dislocate the tribal population across the state”. She had said: “In case, it becomes absolutely necessary to dislocate any member or family of the tribal population, the same should be done in prior consultation with the tribal affairs department.”

Also read: Ladakh: Unlike in J&K, All Non-Gazetted Jobs Reserved for Natives

The minutes said that the chief minister had also directed the inspector-general of police, Jammu, the state authorities and all the district commissioners not to provide any police protection for the eviction of people from the tribal communities without approval from the ministry of tribal affairs.

But soon after the tribal affairs ministry began to circulate the minutes of the meeting, the BJP began to question the document.

“These were not discussed as recorded,” said Ajay Nanda, BJP leader and junior minister for tribal affairs, about some of the decisions listed in the minutes.

“I do not agree with points (i), (ii) and (XVIII) of the minutes of the meeting since these were not discussed as recorded. Moreover, these are not recorded in the decisions taken by the chair (Hon’ble Chief Minister) (sic),” Nanda wrote to Mufti.

After Article 370 was read down, the BJP seemed to have changed its stand on the very issues it had opposed when it was part of the alliance with the PDP.

Since 2019, the Union government, the administration of the union territory as well as the J&K unit of the BJP have hailed the extension of the Scheduled Tribes and Other Forest Dwellers (Recognition of Forest Rights) Act, 2006, as a “people-friendly and progressive law to ensure rights to weaker sections”.

This is a clear departure from the position taken by its minister in charge of the forest department in 2018.

According to BJP leader and former deputy chief minister Kavinder Gupta, the BJP had always supported the empowerment of tribal communities, but had opposed certain initiatives in favour of J&K’s scheduled tribes between 2015 and 2018 due to “the insincerity of our alliance partner.”

“They [the PDP] were not sincere in implementing pro-public initiatives and wanted to give benefits of policies and laws to selected people,” Gupta claimed.

The FRA had become applicable to J&K along with other Union laws from October 31, 2019, the day the state of Jammu and Kashmir was formally reorganised into the two union territories of J&K and Ladakh.

The BJP has also hailed the move to grant political reservations for people from the scheduled tribe communities in the assembly of the J&K union territory.

Ironically, when the delimitation exercise ends, 11 seats will be reserved for them – two less than they had had in the last assembly even without reservations.