'More Visiting Officers Than Villagers': Inside J&K Govt's 'Back to Village' Outreach Programme

Villagers have resigned themselves to the fact that their problems will remain problems in spite of these events aimed to foster grassroots connect with the government. Most of the lanes and bylanes in Soiteng are submerged any time there is rain. Photo: Mudasir Ahmad

In June this year, an event of the Jammu and Kashmir government’s outreach programme, ‘Back to Village’, was held at a middle school in the area. It lasted for two days and saw the participation of a large number of people.

Highlighting their issues, the locals demanded the macadamisation of a barely 200-metre link road connecting the school to the rest of the locality. People asked for the school playground to be levelled with earth fillings and maintained properly. A new drain, parallel to the link road, was also on the list of demands.

Promises that were never kept

More than five months later, when the second phase of the programme was held in the locality on November 29 and 30, the playground had turned into a cesspool following rains the week before.

The sewage coming out from houses had filled the link road in the absence of a drain. Visiting officers had to negotiate their way through the muddy road to reach the venue, the school.

The scene summed up the fate of the demands the locals had raised during the June event.

The Panchayat Halqa comprises more than 450 households spread over Soiteng, Gandbal and Kondbal. Soiteng is particularly shorn of civic arrangement and lacks a modern drainage system, the roads are muddy and power lines hang from tree branches. A mere shower submerges the entire area. 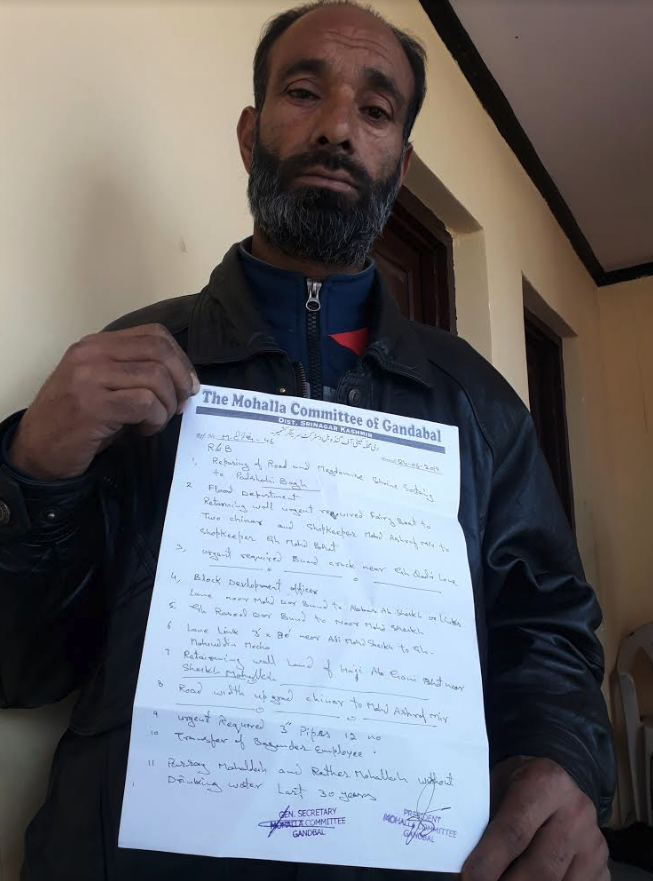 Gandbal labourer, Ishtiyaq Ahmad Reshi was among locals who attended the two-day programme with the purported aim of taking governance to doorsteps, in June.

Back to Village was the first programme of its kind, held when J&K was under governor’s rule for more than a year. The BJP had pulled the rug from beneath the feet of then chief minister Mehbooba Mufti on June 19, 2018, leaving the state in political uncertainty.

In the absence of an elected regime and amid the growing disconnect between the local population in the restive Valley and administration, chief secretary B.V.R. Subramanyam came up with the idea.

“I live from hand to mouth but I didn’t go to work for two days only to attend the programme, hoping that our long pending demands will see an end,” said Reshi.

Joined by a group of elderly men and women, the 42-year-old man came up with a list of 18 demands related to Gandbal. A macadamised road, electric poles, drinking water supply, a canal to prevent floods in the area and footbridge were at the top of the list.

“The officers gave us a patient hearing,” said Reshi. “They promised our concerns will be addressed in the shortest possible time.”

But that never happened, he said.

On Saturday, the last day of the programme, locals largely stayed away. At one point, the number of visiting officials and employees outnumbered the people who attended.

The darbar was held inside a classroom of the school, barely 10×15 feet, on the first floor. There were fewer than 35 chairs. A few of them remained empty.

But Reshi turned up and so did some of his neighbours. “I don’t have any interest in the programme,” he said. “I just want to ask them why they lied to us the last time.”

“They haven’t started work on a single project in Gandbal. The programme is all talk and no action,” said Reshi.

Inside the classroom, government employees and members of the visiting team were left raising questions among themselves on the status of the projects.

“This is an unorganised event,” one of them told The Wire later.

According to the official, employees from various departments should have first gone out on the field with locals to assess the demands on the ground and then prepared a list of priority work.

“Those could have been then discussed for approval at the programme,” he said. “When there has hardly been any outcome from the first programme, how can we expect the second to be a success?” One of the lanes in Soiteng. Photo: Mudasir Ahmad

This particular Panchayat Halqa is a low-lying area; its proximity to Jhelum making it prone to floods.

Last week when Kashmir received fresh spell of rainfall, most of the lanes and by-lanes remained inundated in rainwater five days after the showers.

Locals are tired. “This programme gave us some hope when the officials came visiting last time,” said Abdul Gani Dar, a 70-year old and one of the few who attended the second edition.

According to the elderly man, the only work taken up in Soiteng was the fencing of a local graveyard. “In Kashmir, the dead get more attention than those living,” he said.

Dar drew the attention of the visiting officials to an under-construction bridge and footbridge over Jhelum river. The two bridges will connect the entire area with Sonwar on other side of Jhelum and beyond.

While work on the bridge has been going on for 12 years, according to locals, the footbridge has been under construction for the past four years. Dar has no hope that either will be completed soon.

‘We should stop complaining’

K.L. Sharma, the visiting officer who headed the government team, acknowledged that lack of drainage and roads were the “major issues” in the area. He, however, said the work estimates for most of the pending projects were completed and in some cases Detailed Project Reports were ready.

“I will do on-the-spot inspections of the languishing projects later and accordingly push for their early completion,” he said.

But Dar and those like him are not convinced. “We have been hearing them for decades,” he said.

A group of women in a nearby mohalla recalled that authorities had promised to provide a water connection to every household in the upper area of Soiteng in June. “Can you imagine a household without a water connection at a walking distance from the city centre? We fetch water from community drinking water supply joints. I think we should now stop complaining,” said a mother of two, Sitara.

The second phase of the programme was held across different districts of J&K from November 25 to November 30, in what was the first major outreach programme held in Kashmir after the Centre read down Article 370 of the Constitution and bifurcated the state of J&K into two Union Territories on August 5.

Hundreds of senior officials including gazetted and non-gazetted officers were designated as “visiting officers” to chair an event at every Panchayat Halqa to get a first-hand assessment of the developmental needs on the ground.

The J&K lieutenant governor, G.C. Murmu, his advisors, chief secretary, and commissioner secretaries also participated in the programme which saw some media attention after militants attacked an event in south Kashmir’s Anantnag district, killing an agriculture officer and a village headman.

Across Kashmir, the events were poorly attended. “What else do you expect when the government doesn’t bother to keep the promises of providing even basic minimum facilities?” Sitara asked.