Despite BJP's Claims, Jahangirpuri Demolitions Were Far From a Legitimate Anti-Encroachment Drive

Jahangirpuri is just one of hundreds of colonies in Delhi, a majority of whose residents live in unauthorised, unplanned or unregularised settlements. 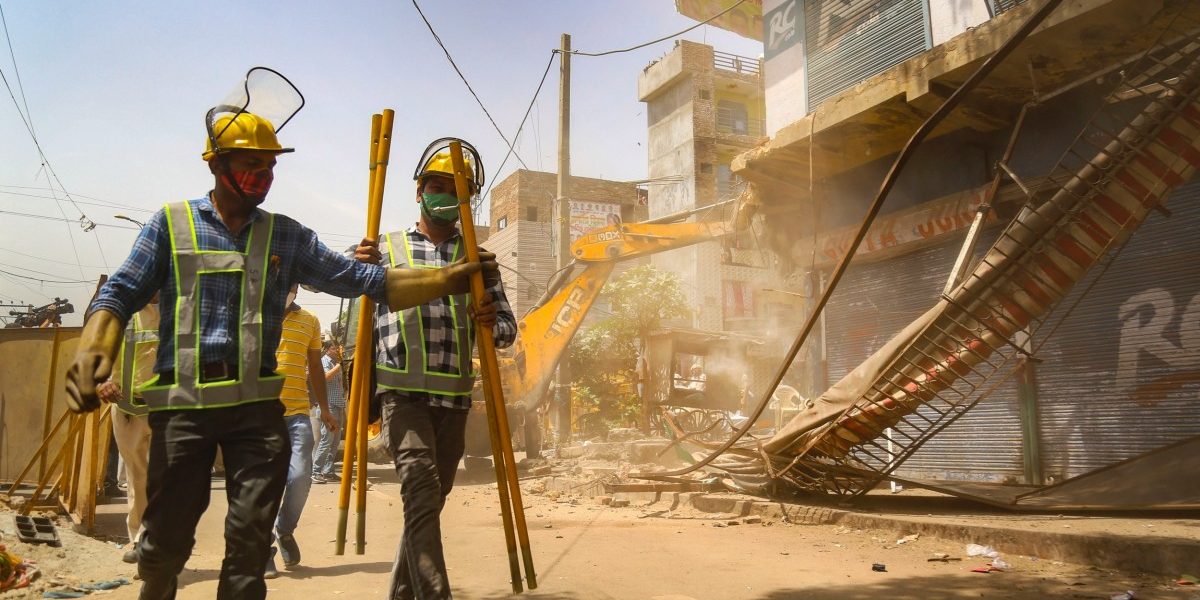 Representative image. A bulldozer being used to demolish illegal structures during a joint anti-encroachment drive by NDMC, PWD, local bodies and the police, in the violence-hit Jahangirpuri area, in New Delhi, Wednesday, April 20, 2022. Photo: PTI

On April 20, after receiving a letter from the Delhi Bharatiya Janata Party chief Adesh Gupta demanding that they bulldoze illegal encroachments of “anti-social elements and rioters”, the North Delhi Municipal Corporation (NDMC) locked up residents in barricaded lanes and undertook an “encroachment removal” drive in Jahangirpuri, demolishing homes, shops and businesses, mostly belonging to Muslims.

Just four days earlier, on April 16, a shobha yatra was organised to mark Hanuman Jayanti in Jahangirpuri, which resulted in a communal flare-up. The violence and subsequent demolition drive came at the heels of two similar episodes in Khargone, Madhya Pradesh and Khambhat, Gujarat – where the administration suddenly woke up to encroachments in violence-hit areas.

Soon after the demolitions started, the Supreme Court ordered in an urgent hearing that the demolitions be halted and status quo maintained. Despite the stay order, demolition continued for over an hour in the presence of the NDMC Mayor and Delhi police.

Aside from the blatant defiance of the country’s apex court, the demolitions carried out by NDMC yesterday violated established law and principles, and the fundamental rights of those affected.

First of all, none of the applicable state laws – the Delhi Municipal Corporation Act, 1957 or Delhi Development Act, 1957 – allow the government agency to demolish buildings and structures without giving an advance notice to the affected parties.

In fact, the lack of advance notice was the primary contention raised by Senior Advocate Dushyant Dave before the Supreme Court on Wednesday. Without a reasonable opportunity to be heard, the rights of the affected people under Article 14 of the Constitution, which ensures equality before the law, are violated. Dave raised the same issue again before the apex court on Thursday, citing Section 343 of the Delhi Municipal Corporation Act, 1957.

Since houses and other permanent structures were targeted in the demolition drive, serving an advance notice under the Section 343 was an obligation ignored by the NDMC.

The Supreme Court had ruled in 1985, and upheld in subsequent cases, that not serving notice to affected parties violates “the principles of natural justice”, and any departure from the due process of law results in an unjust decision.

Tomorrow morning, along with other senior leaders, I will visit the site

Sorry for not being there today! 🙏 pic.twitter.com/H4WMgTt6HM

The decision upheld by the apex court relied upon the UN Special Rapporteur’s Basic Principles and Guidelines on Development-based Evictions and Displacement. The guidelines include a requirement for authorities to demonstrate that the eviction is unavoidable. They also state that evictions should not result in individuals being rendered homeless or vulnerable to the violation of other human rights.

Out of the remaining unplanned settlements, as per the economic survey, which house over three quarters of Delhi’s population, less than 10% have been regularised.

The root cause of the widespread prevalence of unplanned, unauthorised colonies across Delhi, argues Gautam Bhan, is the failure of the state to provide sufficient housing facilities for all. Bhan is the associate dean – School of Human Development, Indian Institute for Human Settlements and author of In the Public’s Interest: Evictions, Citizenship and Inequality in Contemporary Delhi.

“When the state fails to assure proper housing, the rich extend their properties, the poor build slums,” he says.

According to Bhan,  the structures in Jahangirpuri are not land grabs of the kind that got regularised in Vasant Kunj or that of the Akshardham Temple on river Yamuna. “These are encroachments for survival. Not encroachments for intergenerational wealth. Either way, they are done in tacit agreement of the state. How else are they getting electricity connections and paying taxes?”

Only inhabitants of non-affluent unauthorised colonies can apply for regularisation under this scheme. It is worth noting that the Delhi Development Authority has several housing projects in these unauthorised colonies. In fact, one of the victims of the Jahangirpuri demolition drive has approached the apex court, claiming that his shop had been allotted by the DDA in 1977-78.

Till date, over 1,600 applications of unauthorised colonies are pending regularisation. As per the Master Plan of Delhi 2041, unplanned/ unauthorised areas are described as high density, “mix-use hubs” which provide affordable housing and options for micro, small and medium enterprises.  The government reaffirmed the need to reinforce this potential, and improve infrastructure, safety standards, and the quality of life in such areas.

The act of demolition by the agencies yesterday in Jahangirpuri can be better understood in the context of these laws, regulations and data about unauthorised colonies and encroachment in Delhi. The Supreme Court which issued notice on the petitions challenging the evictions today, has ordered that the stay on the demolitions remain in place until further developments in the case. The matter will be listed after two weeks.

Anmol Gupta and Mukta Joshi are lawyers, and Jeff Joseph is a researcher with Land Conflict Watch, an independent network of researchers studying land conflicts, climate change and natural resource governance in India.