Explainer: The Loose Ends of the Sinister ISRO 'Spy' Case

The espionage case dates back to 1994, when S. Nambi Narayanan, along with another scientist, was accused of selling classified information on India's cryogenic engine programme to Russia and Pakistan's ISI.

A GSLV Mk III at the launchpad in Sriharikota. This will be ISRO's vehicle of choice to launch an Indian into space by 2022. Credit: ISRO

The Rs-50-lakh award to former ISRO scientist S. Nambi Narayanan for being “unnecessarily arrested and harassed” by the Kerala police will go some distance in providing a closure to the so-called ‘ISRO spy case’. There will probably never be a real closure – there are too many loose ends to the case that rocked India in the mid-1990s.

It began with the arrest of a Maldivian woman, Mariam Rashida, in October 1994, on the charges of overstaying her visa that led to the surprise arrests of Narayanan, the director of the cryogenic project lab of the Indian Space Research Organisation (ISRO), his deputy and several other persons.

The story emerges from the murky confluence of two separate underground streams. The first was Narayanan’s connection to the cryogenic engine project at ISRO. Having perfected the PSLV, Indian space scientists took aim at the next target — that of a more powerful rocket that could hoist payloads to the geosynchronous transfer orbit. This Geosynchronous Satellite Launch Vehicle (GSLV) would be the capstone of India’s launch vehicle technology. With the PSLV, India had exhausted the limits of the older Vikas engine which, in turn, had been developed from the French Viking engine.

What was needed now was a cryogenic engine that would power the third stage of the rocket. In 1990, India signed a deal with the Russian agency Glavkosmos for the engine, which included the transfer of technology.

Following the Soviet collapse, however, the United States began an effort to block India’s nuclear and missile quest. Globally, it pushed for the extension of the NPT “in perpetuity” and begin negotiations on the Comprehensive Nuclear-Test-Ban Treaty. With regard to India, it sought to tie India into a “freeze, cap and roll back” arrangement with Pakistan.

Then, it succeeded in ensuring that the lease for the INS Chakra nuclear submarine was not renewed and finally, it arm-twisted Russia to scrap the cryogenic engine deal. So, ISRO had to strike out on its own and it did so by initiating a project in April 1994 with its star liquid propulsion scientist, Narayanan, at its head. 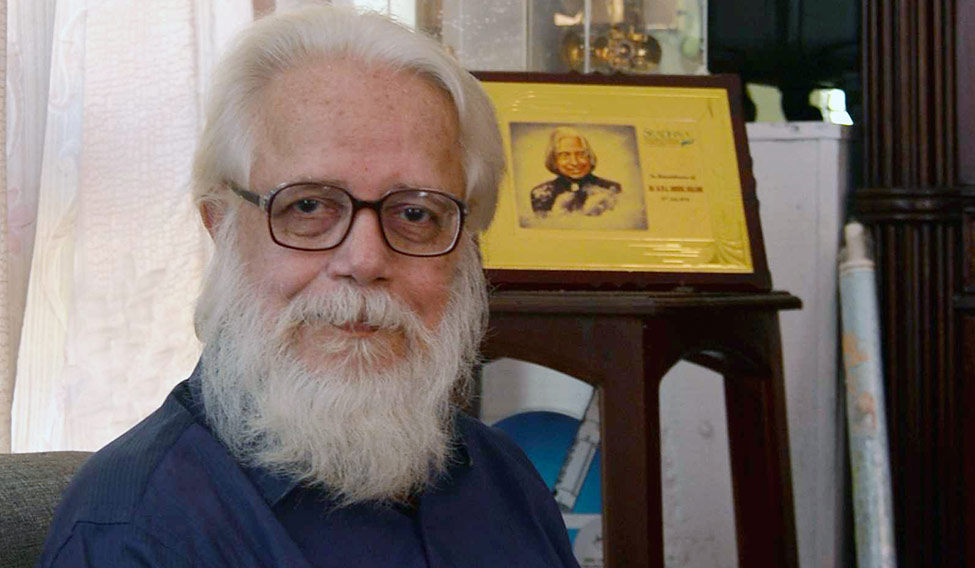 The second stream was the always devious politics of Kerala. Among the more enduring rivalries, there was the one between Congress leaders K. Karunakaran and A.K. Antony. In 1977, Karunakaran’s stewardship of the chief ministership came under a shadow because of the Emergency. He was replaced by the new boy wonder – 37-year-old Antony. After a brief second term, Karunakaran became chief minister for the third time in the mid-1980s and then for the fourth time in June 1991. The Antony faction chafed at this and was always on the lookout for ways to undermine him.

Before Rashida’s arrest, S. Vijayan, the inspector dealing with foreigners, had allegedly approached her for sexual favours and eventually arrested her because she turned him down. In a vindictive act, he decided to frame her for espionage. In the meantime, some senior and ambitious Kerala police officers, who were close to Antony and Oommen Chandy, a Congress leader who had fallen out with Karunakaran, saw Rashida’s arrest as a means of embarrassing the IG police close to Karunakaran: Raman Srivastava.

So the case was given a sinister twist. Within a month of Rashida’s arrest, Narayanan’s deputy D. Sasikumaran, K. Chandrashekhar, the representative of Glavkosmos, the Russian space agency, S.K. Sharma, a labour contractor, and Fauziyya Hassan, a Maldivian friend of Rashida, were arrested. Two weeks later, on November 30, 1994, Narayanan was arrested.

In the media, the police wove a fanciful net of fiction and innuendo alleging at Narayanan and Sasikumaran had been trapped in a sex racket involving the Maldivians and given them secret ISRO papers.

The Intelligence Bureau (IB) played a controversial role in leading the Kerala police down the espionage route and the latter tamely followed. It was only when the CBI looked at the evidence in December 1994 that they found the whole case was a concoction and that the people were being framed.

Within a month of their arrests, it was clear via the CBI investigation that there was nothing to the case. Yet the case dragged on because of entanglement with Kerala politics. Even as Narayanan and Sasikumaran got bail in January, Karunakaran came under pressure from the Antony faction and was forced out of office in March 1995.

The others languished in jail much longer; Rashida was only released in 1998. In May 1996, the CBI finally filed a report before the chief judicial magistrate saying that the espionage case was false and that there was no evidence to back the charges. The court accepted the report and discharged all the accused.

But the CPI(M)-led government that has just come to power decided to play its own game and ordered further investigation till finally, in May 1998, the Supreme Court quashed the Kerala government’s move for a fresh investigation.

The Kerala governments have since protected the rogue police officers and have dragged their feet in paying the compensation ordered by the High Court and the National Human Rights Commission. So in April 2017, Narayanan filed a petition to initiate criminal proceedings against the police officers who allegedly fabricated evidence against him. The Supreme Court decided instead that it would be better to order a compensation to Narayanan to restore his reputation.

No amount of compensation can do justice to Narayanan and the others arrested in the case. But the question that lingers is: Why? Why were he and the others put through such an ordeal?

There are no easy answers. One is that such things are not uncommon in India, where the police often fabricate cases on a whim and act with impunity. In this case, the interests of various parties — Vijayan, IB Joint Director Matthew John, R.B. Sreekumar, the deputy director D.B. Sreekumar, IPS officer Shiby Mathew – also seem to coincide, though perhaps not for the same reason.

The charge easiest to dismiss is of espionage. As for cryogenic engines, India clearly did not have that technology. The effort to get it from the Soviet Union had collapsed under US pressure. And Narayanan had just been appointed head of a group to develop it. So accusing him of selling technology that did not exist doesn’t make sense.

The second important point is to note that there is little “secret” in ISRO technology. It has, for example, widely distributed the designs of the Vikas engines to its contractors. To sidestep restrictions like the Missile Technology Control Regime and promote foreign collaboration, India had deliberately made ISRO a transparent organisation, while the military missile programme was handled by the Defence Research and Development Organisation.

Now to the sinister part. We can understand the motives of Mathew: he was interested in tripping Raman Srivastava (who eventually rose to become DGP of Kerala and Director-General of the BSF), who he perceived was his rival. But what of the IB personnel Matthew John and R.B. Sreekumar?

There is no clear answer. The CBI report on the case makes it clear that the investigation was led by the IB, and the state police played along because their own vested interests were being served. The CBI said that no “secret” documents were leaked nor did anyone arrested receive any money. Legally, the IB can neither arrest not frame charges and so the actions on the allegations, including perhaps their concoction, was done by the IB. The report says, “The IB had already come to the conclusion regarding the involvement of the accused in the espionage case even before the case was registered.”

What could have been the  motive of the IB joint director, the deputy director? Incompetence cannot, of course, be ruled out.

But there are always wheels within wheels where the IB is concerned. This was evident in a subsequent (and false) espionage case the IB sought to foist on innocents, which is now known as the NSCS spy case of 2006. At the time the IB’s corporate interests may have been involved: they wanted to block the NSCS from taking over what subsequently emerged as the NATGRID.

So the last possibility is that the US did indeed play a role, via rogue elements within the IB. They played a visible role in blocking the sale of cryogenic technology to India. But once ISRO determined to go ahead, they decided to undermine Indian efforts by disrupting the Indian programme. Nambi Narayanan, it may be noted, had no links with Rashida, Fauzia or anyone other than Sasikumaran, who however may have known the women. Yet he was framed as the key figure in the drama. And he was, of course, the top Indian specialist on liquid propulsion.

What could have been the US motive? The US thinks in the long term. That is why it created the Missile Technology Control Regime, whose existence was only revealed shortly after India conducted the first Prithvi test in 1987. Even if cryogenic technology is cumbersome and has no real military applications, it is capable of powering missiles that can reach the continental United States.

Abundant caution has made the US what it is. Note that the US only got serious about North Korea after the latter demonstrated its capability of a missile that could reach the US in July 2017. What concerns the US is capability, not who possesses it.