The Irrationality Behind the Benchmark Price of the Rafale Deal

Of the several much-debated issues on the Rafale deal, one important aspect is the benchmarking of prices before negotiation. As widely reported and discussed in the media, the way the benchmark was fixed has been rather contentious.

This issue, among others, has become the inflection point in the entire Rafale deal.

What emerges from the media stories is that there was a difference of views among the Contract Negotiation Committee (CNC) members on the benchmark price worked out by the Adviser (Cost). While a few members went along with him on the benchmark price, others demurred. Thereafter it seems to have been put through a democratic process – a decision on the basis of majority views.

The majority, so the story goes, didn’t agree to the benchmark price of €5.2 billion, as worked out by the Adviser (Cost), and instead suggested €8.2 billion.

The difference in the two views expressed in the CNC seems to have arisen due to use of an “aligned cost table” based on the 2007-RFP’s “non-deal” to arrive at the higher benchmark price.

“Cases for which contracts have earlier been signed and benchmark prices are available, the CNC [contract negotiation committee] would arrive at the reasonable price, taking into consideration the escalation/ foreign exchange variation factor.”

Since there were no signed contracts on the item and thus no benchmark price was available, it’s baffling how the benchmark price was revised upwardly, by use of this intriguing “aligned cost table”. The “aligned cost table” used by the majority view in the CNC was based on the benchmarking of the 2007-RFP non-deal that wasn’t relevant, and thus had no foundation. Not to reiterate that this higher benchmarked price of €8.2 billion flew on the face of express provisions of the DPP 2013.

If there were differences of opinion on benchmarking among members of the CNC, with three crucial members – joint secretary and acquisition manager, finance manager, and advisor (cost) who had the relevant domain expertise on benchmarking – plumping for €5.2 billion, while others sought enhancement to €8.2 billion on an “aligned cost table”, the details doubtless deserve a close look-in to see if there were any irrationalities and illogicalities.

If what has been put out in public space is correct, it is evident that the majority view on benchmark price was that of, what I may say, the so-called lightweights in the CNC, while the minority view was that of the domain experts.

A quick look at the profile of each CNC member vis-à-vis their expertise will bear this out.

To start with, one member (JS, DOMW) on the majority side, had no role whatsoever to play on fixation of benchmark price. His nomination was contingent on inclusion of the offset proposal, and his role strictly confined to the offset issue. Nor does he have any expertise on benchmark price.

Another member, JS & Additional Financial Adviser, too had no direct role to play in the benchmark price fixation. His job profile in the MoD concerns overseeing financial matters pertaining to revenue procurements and he is an outsider to the CNC on matters of defence capital procurement. Also, not being a permanent member of the CNC as spelt out in DPP 2013 but a member nominated in this case by the RM, he can’t be deemed as a core member so far as benchmark price fixation goes.

The same goes for the other two members, the Deputy Chief of Air Staff (DCAS) chairing the CNC, and the Assistant Chief of Air Staff (Plans) who, as per procedure, is nominated as the member-secretary of CNC by the Chairman (DCAS): their core competence lies elsewhere, not on working out the nitty-gritty of the benchmark price.

On the other hand, the crucial man is the Adviser (Cost) [a JS-level officer from the Indian Cost Accounts Service (ICoAS)] who works out the cost-sheets of various items based on his domain expertise and who attends the CNC as and when required, specifically to perform such mandates. He is helped along by the Finance Manager (Air) – another JS-level officer – who is the whole time finance expert meant only for defence capital acquisition and is acquainted with the cost elements.

The third and crucial member is the JS & Acquisition Manager (Air) who anchors all defence capital acquisitions and is familiar with all capital procurements/costing of various items.

This is not to forget the aspects of ToT and licensed production cost, plus the cost of setting up the facility in India in the so-called non-deal of RFP-2007 that will likely pan out post the RFI (Request for Information) of April 2018. To take into account this amount and to amortise the cost per unit and then to work out the figure for 36 Rafale in fly-away condition and arrive at the “aligned cost table” can hardly be considered rational. The logic is flawed because it is invalid.

To elaborate, going by the RFP-2007 this expenditure was to be amortised over the entire spectrum of 1o8 aircrafts to be manufactured in India and the 18 Rafale aircrafts in fly-away condition from France.

“The costs of the aircraft would include direct acquisition including that of weapons and missiles, warranty for first two years, licence royalty for manufacture in India, cost of technology transfer and costs of initial training.”

Beyond this issue of amortisation, it’s well to remember that even the depreciated value of the facility set up in India, upon closure of this production line, too has a residual value (not a small sum), and needs to be costed.

Amortisation in its classical sense is applied to intangible assets. When funds are invested for setting up a facility that is quantity-neutral, it is natural that the greater the number the better it gets for the investor. With the cost of such investment deemed inexorable, the higher the number the lesser the cost per unit with the investment spread across a wider spectrum, thus pulling down the unit price.

How logical is it then to apportion this expenditure over 36 units instead of a much higher number as envisaged in the RFP-2007 “non-deal”? Clearly this can’t be viewed as a prudent and reasonable benchmark price to buy from public funds. It’s much too simplistic a calculation to convince even the gullible and the uninitiated. 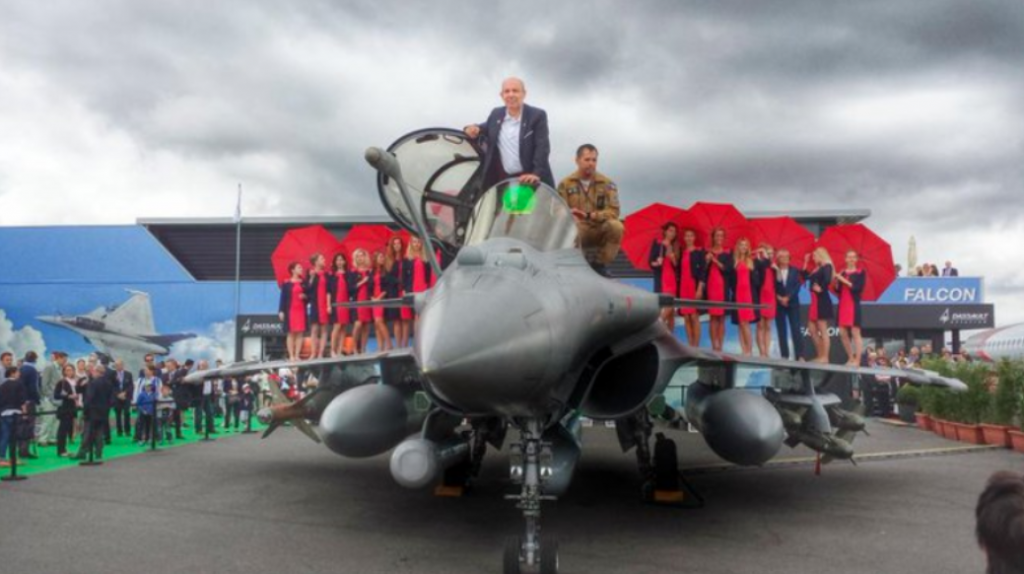 Éric Trappier, head of Dassault Aviation, at the Le Bourget airshow near Paris in 2015. Credit: Dassault

Often in the public slugfest, another crucial issue that segues and flows out of the present buy has been missed out. It is critical, because beyond the 36 Rafale aircraft it will inevitably raise many gnawing questions for future buys. For one, will this Rafale deal not impact on future benchmark price determination of fighter jets among different vendors that includes Dassault Aviation?

Will, then, Dassault not willy-nilly get a head start over other vendors in overall assessment/evaluation of future fighter aircraft RFP(s)? How contractually ‘correct’ and moral will that be? Will it not endow on Dassault a witless advantage vis-à-vis other competing firms, especially on India specific enhancements (ISE) (or by any other technical specifications these are spelt out in the Request for Proposal (RFP)) that lately have been much in the news and are said to be the vital elements in pushing up the cost of the Rafale deal beyond the cost of bare-bone aircraft?

Throw in the new variable of strategic partners and ‘Indian Production Agency’ already indicated in the RFI, and you get a sense of the besetting issue staring at us.

Given this backdrop – using the “aligned cost table” – to arrive at benchmarked price and the resultant advantage embedded for Dassault in the form of setting-up of ISE developmental facility for benchmarking in the Rafale case, it boggles one’s mind how a levelled field could be worked out and offered to all vendors for MMRCA or fighter jets as in the April 2018 RFI. It is hard to think of a levelled field that could be on offer in the imminent future to all vendors without putting Dassault at an unevenly high advantageous perch.

Does it, then, follow that the seeds of disparity have already been sown, albeit unwittingly, and shall stay the course regardless, as long as similar technical specifications hold? It is hard to second-guess on so convoluted an issue.

Notwithstanding all that has been said, it doubtless couldn’t be much of an ask to let the citizens know on what grounds the benchmark price proposed by CNC’s domain experts was overruled.

The justifications adduced to negate and overrule the benchmark price are vital – on it hinges one of the most important aspects of the whole Rafale polemics.

If the logic to overrule is  overpowering and convincing, it would smother all doubts and give the present brouhaha a quiet burial. Shouldn’t the government then not be transparent on this aspect instead of taking refuge under the secrecy agreement?