Rather Than Flaunting ‘Operationally Inadequate’ Vikrant, Navy Should Clear Backlog

Already delayed by nearly seven years, the 40,000 tonne carrier will be commissioned later this month, but without its aviation flight complex that is critical to operating its combat air arm. 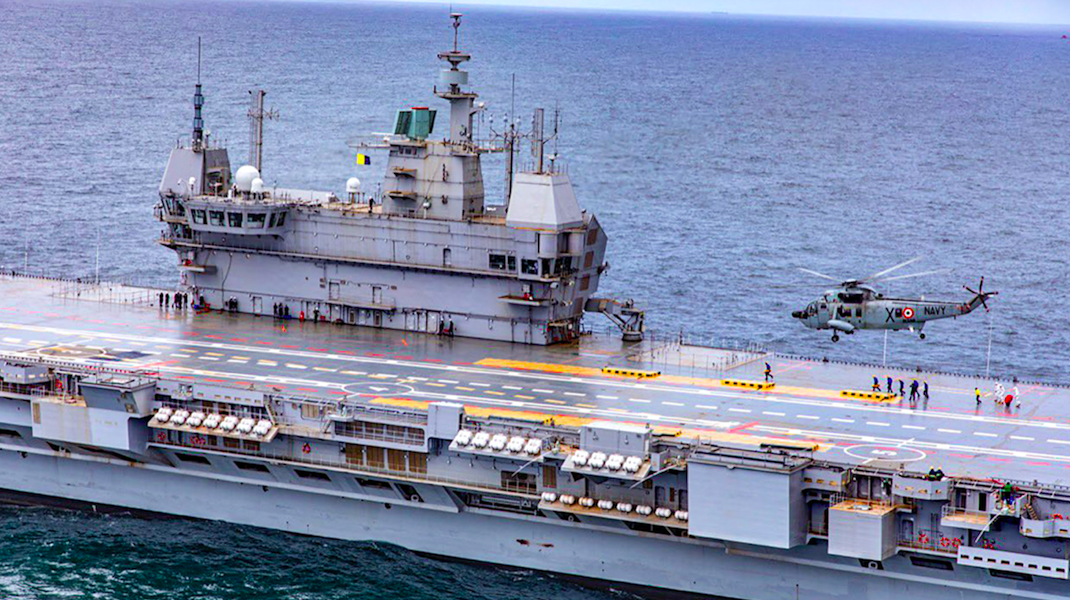 Chandigarh: The imminent commissioning of the Indian Navy’s first indigenous aircraft carrier-1 (IAC-1) as INS Vikrant, to mark India’s 75th Independence Day, will be that of an ‘incomplete’ platform that will take another 18-20 months, if not more, to become fully operational.

Already delayed by nearly seven years, and beset by a six-fold price overrun – from its original 2003 project sanction of Rs 3,216 crore to over Rs 20,000 crore currently – the 40,000-tonne short take-off barrier arrested recovery (STOBAR) carrier will be commissioned later this month, but without its aviation flight complex (AFC) that is critical to operating its combat air arm.

“Structurally the carrier is complete as a sea-going platform, but operationally it still needs to demonstrate  its functionality as a floating airbase capable of deploying and recovering fighter aircraft,” said Indian Navy Captain D.K. Sharma (retired). Like other carrier’s around the world, this will be achieved subsequently for Vikrant to enable it to achieve its designated role, he added.

The AFC, which is being supplied by Russia’s Nevskoe Design Bureau (NDB), has faced recurring delays owing to its bespoke design requirements to meet the Indian Navy’s specific operational needs, alongside differences over its eventual cost, and is unlikely to be fully installed and functional till 2023-end, sources in the Indian Navy said. They said a large proportion of the AFC that involves over 300 hi-tech compartments comprising the command centre, diesel alternators, power supply and heating, ventilation and air conditioning systems and a myriad other sundry components like arrestor wires and aircraft guiding lights, had already been delivered to Cochin Shipyard Limited (CSL) and awaited fitment by Russian technicians. Some diverse AFC equipment, on the other hand, is on order and is yet to be delivered.

But the US-led sanctions on Russia for invading Ukraine had only delayed the AFCs’ installation, industry sources said, making it difficult to put a timeline on its completion to render Vikrant as a deployable battleworthy platform. Currently, however, the carrier is capable of embarking helicopters on its flight deck, an activity that needs little or minimal AFC involvement and is almost certain to be on display during its forthcoming commissioning ceremony at Cochin Shipyard Limited which constructed the platform as part of Project 71.

Similar to the one that manages the air group of INS Vikramaditya (ex-Admiral Gorshkov), the navy’s 44,750-tonne sole operational refurbished Kiev-class Russian carrier, Vikrant’s AFC is expected to eventually support a complement of 40-odd fighters and assorted rotary wing assets. For the immediate future, these will include some 25-odd Russian MiG-29K/KUB fighters, Kamov Ka-31 early warning and control (AEW&C) helicopters and the under-induction Lockheed Martin/Sikorsky MH-60R multirole naval helicopters.

Eventually, the Indian Navy aims to acquire 26 multi-role carrier-borne fighters (MRCBF), including eight twin-seat trainers, to operate off Vikrant, for which France’s Rafale-M (Marine) fighter and Boeing’s F/A-18E/F ‘Super Hornet’ were under evaluation, after recent trials. It would, in time, operate via the Russian AFC. At a later stage, Vikrant is also likely to deploy the under-development indigenous, twin-engine light combat aircraft (Navy) or LCA (N) and unmanned aircraft systems or UAS.

One of these two former fighter types will, in due course, supplement, and eventually replace a bulk of the 45 MiG2K/KUBs delivered to the Indian Navy between 2009 and 2017. These had proven inadequate in meeting the navy’s operational requirements, as they had demonstrated their inability in delivering their specified weapons payload to their stated ranges with a full fuel load.

In its July 2016 report, India’s Comptroller and Auditor General (CAG), for instance, severely criticised the Indian Navy and the Ministry of Defence (MoD) for technically accepting the MiG-29K/KUB fighters, despite them being “riddled with problems, discrepancies, and anomalies”.

In its damming audit, the CAG had, at the time, revealed the fighters’ multiple deficiencies which included shortcomings with its airframe, its RD-33 MK engines and fly-by-wire systems; in short, the entire fighter. The report also stated that the fighters had suffered repeated engine failures, with at least 10 cases of single-engine landings. Of the 65 RD-33MK turbofan engines received from their manufacturer Klimov, the Indian Navy had rejected or withdrawn at least 40 from service due to defects.

Consequently, operational availability of the MiG-29Ks between 2014 and 2016 fluctuated from 15.93% to 37.63%, while that of the MiG-29KUB dual-seat trainers was between 21.20% and 47.14%, and one which had improved marginally, if at all, the CAG disclosed. It also revealed that these technical deficiencies would considerably reduce the MIG-29K’s overall service life of 6,000 hours and that even its full-mission simulator had proven “unsuitable” in training pilots for carrier operations.

Additionally, the MiG-29K/KUB fleet continued to face severe maintenance problems, as a large number needed repairs after each deck landing that damaged many of the fighters’ onboard components. There were also complaints from the Indian Navy regarding Russia’s inability to incorporate all agreed-upon features onto the MiG-29Ks. This state of affairs had resulted from the 2014 sanctions, still in place, imposed on Moscow by the US, European Union, and other international organisations for its military intervention in Crimea, which had been contracted to provide several of the MiG-29K components.

In recent months, this situation had only deteriorated exponentially following additional embargoes imposed on Russia for its ongoing assault on  Ukraine, making it even more problematic for the Indian Navy to source spares and components for its MiG-29K fleet.

India’s procurement had revived Mikoyan’s flagging MiG-29 naval variant programme, rendering the Indian Navy as Russia’s sole overseas customer for these fighters. The Russian Navy, for its part, operates a handful of MiG29K’s and KUB trainers, far less than the numbers in service with the Indian Navy. 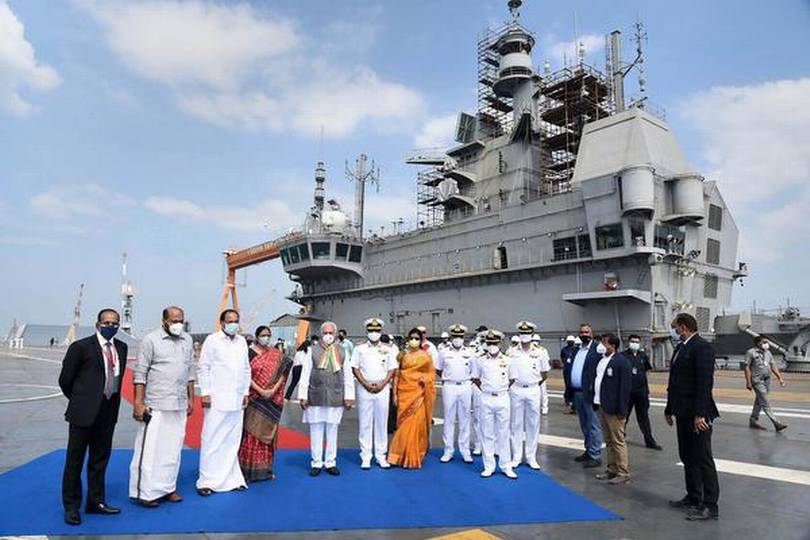 Vice-president Venkiah Naidu with Naval personnel and dignitaries on his visit to see India’s first indigenous aircraft carrier, the INS Vikrant, in Kochi, set to be commissioned in August this year. Photo: PTI

Meanwhile, Vikrant is not the first major naval platform to have been recently commissioned despite being ‘operationally inadequate’, or as one naval officer jocularly put it: without its full ‘complement of teeth’.

Four of the Indian Navy’s six Kalvari-class French Scorpene diesel-electric submarines (SSKs), that are being licence built by Mazgaon Dock Shipbuilders (MDL) in Mumbai, for example, have been commissioned into service 2017 onwards without the originally planned Black Shark heavyweight torpedoes (HWT).

Instead, these four boats were presently armed with the older German-origin SUT-series torpedoes that were acquired by the Indian Navy in the late 1980s for its four Shishumar-class German HDW Type 209/1500 SSKs. Ultimately, the remaining two Scorpene boats too would be fitted with SUT torpedoes whose strike range is around 28 kilometres, while that of the advanced, next-generation Black Shark equivalent, is almost 50 km or almost twice that. Moreover, the SUT’s technology dated back to the 1980s and had operational limitations in its tracking and homing features, compared with the Black Shark.

Also read: How Does the Sanction Waiver to India Aid US’ Strategic Interests?

This ‘compromise’ or ‘concession’ came about after the tender to procure 98 Black Shark torpedoes for all six Scorpenes from Italy’s Whitehead Alenia Sistemi Subacquel (WASS) was scrapped by the Ministry of Defence (MoD) in May 2016. It followed allegations of corruption involving WASS’s then parent company, Finmeccanica, in the import of 12 AW101 AgustaWestland helicopters for the Indian Air Force (IAF) to ferry VVIPs like the president, prime minister and other dignitaries.

However, the outcome of the helicopter contract, which went into arbitration, remains unknown, with three AW-101s delivered to the Indian Air Force in 2012-13 still in storage in New Delhi. Ironically, WASS was in no way involved in any questionable dealings, and the fact that the Indian Navy had shortlisted its HWT after extended trials, but later abandoned it, speaks volumes for the forces’ operational priorities.

The improvised arming of the Scorpenes involved SUT torpedo makers Atlas Elektronik extending the operational life of 64 of them in the navy’s inventory by 15 years as a stopgap measure or jugaad – innovation – as both the Indian Navy and the MoD had collectively failed to effect a comparable torpedo buy. Fitting the Scorpenes with the substitute SUTs also necessitated changes to the platforms which had all been structurally designed to receive the Black Shark torpedoes. It also meant that the already insufficient number of SUT torpedoes for the navy needed apportioning between the Shishumar and the Scorpene SSKs, further depleting the force’s war wastage reserves.

Furthermore, the recent 310-strong list of military items whose import has been proscribed by the MoD includes torpedoes which, in effect, would need to be developed indigenously under the Atmanirbhar Bharat initiative, aimed at India’s military sourcing all its equipment needs locally. And, since the technology to domestically design HWTs needs developing over time, it follows that the hugely expensive and operationally effective Scorpene SSKs will, for the foreseeable future, remain ineffectually armed, diluting their overall deterrence capability and war-waging effectiveness in the surrounding waters.

In short, the Indian Navy needs to comprehensively complete projects it had started before flaunting them half-finished. It should simply not accumulate a backlog of unfinished programmes.