Fix Blame on the Neros Who Fiddled While Delhi Burnt

Muscular governments never want to even re-examine their muscularity, lest it shows they are getting weak in the firmness of their purpose.

Whether Nero fiddled while Rome burnt is lost to controversy.

But two Neros can easily be identified in the Delhi incidents. They were Prime Minister Narendra Modi and US President Donald Trump, who continued their optics and dined at a banquet in Rashtrapati Bhawan while Delhi burned.

I will return later to whether Delhi chief minister Arvind Kejriwal was also a Nero. These were the most formidable riots since the massacre of the Sikhs in 1984, the Bombay riots of the 1990s – and the Gujarat killings of 2002, for which many fingers were pointed at Modi who was then chief minister. Since then, we have had cow lynching cases, the murder of Muslims and Dalits and others, rape, and other heinous cases.

There was an all-India protest against the Citizenship (Amendment) Act (CAA).

One of the defining features of the Modi government has been to never relent, never engage on issues raised by its critics. Here, the Modi government had the option, given to it by parliament, to defer the date on which the Act would come into effect. But they did not do so even as a large part of India was in strong protest mode.

State legislatures have passed resolutions disagreeing with the CAA.

Also read: What Is Article 131, Under Which Kerala Has Challenged CAA?

This was a case where the Central government needed to engage the state governments and the protesters. But there was no dialogue, in keeping with the Modi government’s general aversion to this sort of engagement. Muscular governments never want to even re-examine their muscularity, lest it shows they are getting weak in the firmness of their purpose.

Whatever the reason, the Centre, over these long months, has abdicated its democratic duty to explain, listen, respond and engage with either the people or the concerns raised. If BJP leaders claim that they did so, it was only to make proud, declaratory statements to their supporters – as if to underline their view that they are never in the wrong.

When an earlier warning was given in Jamia and New Friends Colony and buses and cars were burnt, it was also a time to engage and discuss. Instead, over several days, the burnt vehicles were left as monuments to the protesters’ folly. 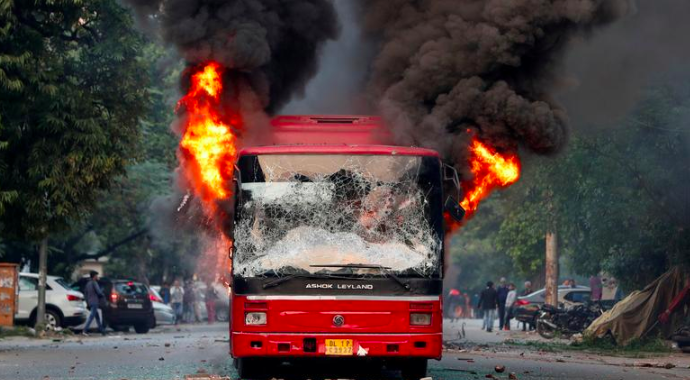 A burning bus is seen after it was set on fire near Jamia on December 15, 2019. Photo: Reuters/Adnan Abidi

I am not defending the torching that took place. Protests should be non-violent but effective.

Anger is a legitimate emotion in life and politics. It should not get out of hand. But if it does, was it also because of the obstinacy of the government to direct the blame away from them? A policy of ‘we are right and will not listen to you’ in times when democracy asserts itself is foolish.

Modi had a thumping majority in parliament till 2024 and could have continued his foreign travels as the Maharaja of India. But there were elections in the states through which his political conquest in India would be complete.

He and his colleagues felt that if the muscular policy of ‘no explanation and no compromise’ won them the 2019 general election, such a policy would take them to victory elsewhere too. If you feel that you are an elected dictator, your posture changes but not the rigidity of the mind.

It is important to remember that when the Anna movement took place, the Congress engaged with it as a result of which parliament passed a ‘sense of the house’ resolution. This was not compromise but part of democracy.

When British Prime Minister Boris Johnson suspended parliament, he was rapped on his knuckles by the populace and the apex court. In the present case, it was the Supreme Court – partly to blame for not hearing the CAA case immediately – that sent interlocutors to Shaheen Bagh.

After the Delhi riots, when national security advisor Ajit Doval was sent to the field, he did not go there to hear the grievances of people against whom violent goons had been unleashed but to assess the security position, which was clearly a derivative problem.

The Delhi Police has much to answer for.

It is one of the best resourced police forces in India. Thousands of calls were made including those by Akali Dal MP Naresh Gujral. The SOS calls were ignored and few FIRs were filed.

Former police commissioner Ajay Raj Sharma and other retired officers have openly said that the police moved too late, too ineffectively. One policeman died and many were injured. On the civil, side there were at least 50 dead and hundreds injured. The number of those forced to flee their homes and seek refuge elsewhere is in four figures.

One grieves for all of those who died.

Delhi’s police is run by a commissioner system with greater power to the commissioner. The police come under the Union home ministry, headed by Amit Shah.

Even if we accept the untruth that the home minister does not interfere except in policy matters, surely there were policy issues that were involved. What was lieutenant governor Anil Baijal doing? After the Aam Aadmi Party government won its case of 2016, the LG had enough space to move the Centre towards an even handed policy. But he did nothing.

Kejriwal, who won a great victory in the recent assembly elections, also has much to answer for.

By going to Rajghat, did he think Gandhi would descend to help? Kejriwal did not provide for dialogue, proper shelters, treatment and immediacy.