Protests are scheduled to be held in 12 cities across the country following the lynching of a 15-year-old on suspicions of carrying beef. 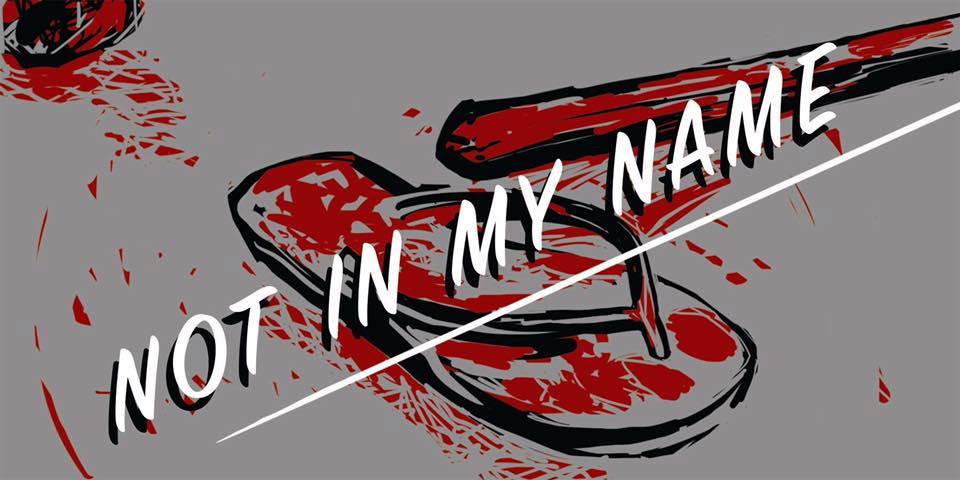 Catalysed by the mob murder of a teenager in India on June 24, followed by a Facebook post on June 24 by filmmaker Saba Dewan, a #NotInMyName campaign is taking off across India with simultaneous protests in several cities on Wednesday, June 28, against the ongoing mob lynchings and vigilante violence targeting Muslims and Dalits.

The violence in India is eerily similar to what we have been seeing in Pakistan where Ahmadis, Shias and others are routinely targeted for their faith. Right-wingers in India are using the country’s ‘beef ban’ like their counterparts in Pakistan are (mis)using ‘blasphemy’. Images of the bloodied 15-year old Junaid Khan dying in his brother’s arms evoke memories of the murder of Mashal Khan, the student lynched in Mardan in April.

To quote former book publisher Amit Shah from Kolkata: “Militant Hinduism is not a religion; it is fascism in saffron. We (Indians both in India and Indian-born like myself) have never seen such hatred toward Muslims by Hindus in our lifetime. We are post-partition, Independent India children”.

He is right, and we Pakistanis are the same people.

I tweeted: “Militant Hinduism is not a religion; it is fascism in saffron” Ditto militant Islam, Christianity, Judaism, Buddhism Militancy = fascism”. So, in solidarity with my comrades in India, I too am participating in the “Not In My Name” campaign.

"Militant Hinduism is not a religion; it is fascism in saffron"
Ditto militant Islam, Christianity, Judaism, Buddhism
Militancy = fascism

After the murder of Mashal I wrote a piece titled ‘Pakistan’s road to redemption‘ arguing that how we respond to such injustices is what will define us going forward. I also wrote that the strength of the pushback against fascism in the USA, in India and Pakistan appears to be roughly proportionate to the strength of their functioning democracies and how long they have had a continual democratic political process. A continuation of this process will eventually reap dividends, but along the way there will be painful losses and more bloodshed.

Americans began “Not in My Name” protests in the 1970s against the invasion of Vietnam. The slogan has since been used to counter many other militant actions.

Filmmaker Anand Patwardhan has called for supporters to wear black armbands or black ribbons for at least a week. 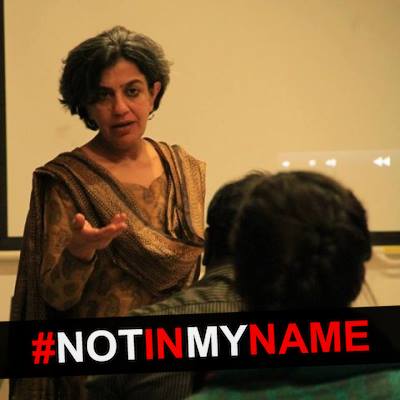 To the ‘whatabouters’ asking about the killing of soldiers and other kinds of violence, Patwardhan’s response is simple: “The black ribbon or armband mourns all that is tragic in India including people killed on all sides in Kashmir.  It is up to each individual to speak about why they wear this ribbon. There is no slogan or pamphlet attached. it is a democratic act of mourning.”

Those who want participate in this campaign by adding #NotInMyName to their profile picture can do so using this app.

Rajdeep Sardesai’s words in his excellent piece The poison of ‘kuch log’ ring true for Pakistan and elsewhere too. “Fall in line or face retribution. You don’t need a riot any more when one lynching will settle the argument, where a union minister will attend the funeral of the killers in Dadri but not provide solace to a grieving family, where the killers are ‘honoured’ in Alwar but victims are left to fight their own battle for justice”.

As I wrote after witnessing racist abuse here in Boston, being a bystander is not an option. We’re seeing Muslims, ‘Muslim-looking’ and ‘other’ people being attacked in the US too, where signals from the top are not sympathetic to Muslims, despite lip service. For the first time in nearly 20 years the White House didn’t host its annual Iftar dinner. In India, for the first time, no ministers from India’s ruling party attended the president’s annual Iftar. It was also the first time that the UP Congress cancelled its annual Iftar.

Sardesai’s words further on – “Because India is not Pakistan and cannot and must not be a majoritarian state” – may serve to instill a sense of shame in closet nationalists/ fence-sitters and push them to speak out to prove they are not like Pakistan (a dirty word in India). However, these words also, I’m sure unintentionally, play down the struggle of democratic minded Pakistanis and pander to the us vs. them mentality.

The forces of fascism are the same, no matter what ‘ism’ they claim to follow. Indian activist Harsh Mander has called for a world of new solidarity, stressing the need for cross-border as well as cross-community solidarity. His words resonate universally.

Details of the ‘Not in my Name’ protests on June 28:

Details of the ‘Not in my Name’ protests after June 28:

Beena Sarwar is the editor of Aman ki Asha.