Given the costs, the low testing, tracing and treatment capacity, and little evidence to justify a blanket shutdown, it’s not clear why the ‘nuclear option’ had to be pressed. People stand apart in a line to receive free food being distributed on a street during a 21-day nationwide lockdown to limit the spreading of coronavirus disease (COVID-19), in New Delhi, India March 30, 2020. Photo: Reuters/Anushree Fadnavis

The 21-day lockdown announced by Prime Minister Narendra Modi entered its second week on Tuesday. The entire healthcare sector has been stretched beyond state capacity from an emergency lockdown imposed across states. Testing and private protective gear for medical staff still remain acutely short in supply while heart-rending images of stranded daily-wage migrant workers walking on highways in hope of returning to their homes are a reminder of the disproportionate impact the government’s measures have had.

If one takes a step back to reason (and understand) both, the cause and effect of the blanket lockdown to counter the spread of the coronavirus, three big unknowns still remain a mystery, warranting a government explanation.

The first unknown is in establishing reasonable cause behind the announcement of a blanket 21-day nationwide lockdown by the prime minister.

Even at this stage, we simply do not have enough public health data available nor justification provided that could have alarmed the Union government to an extent that it take such a drastic, draconian measure, and do so without consulting all state chief ministers or planning the likely ramifications in advance. The Indian Council of Medical Research (ICMR) still denies most evidence of community-level transmission of the virus and rejects the idea of pursuing mass-scale, random testing.

So, it is reasonable to ask if such a wide-scale and prolonged lockdown was even needed in the Indian context.

As observed in the recent numbers released by the health ministry on COVID-19 affected cases, the fatality rate of the virus in India remains pretty low (at 2.6%).

Even if there was any evidence or an underlying model predicting a widespread contagion, neither the health ministry, nor the prime minister himself, provided any information on record that could have justified a blanket lockdown. Even experts who had sketched out worst-case scenarios were making the case for more widespread testing and better tracing efforts rather than the step Modi announced.

In this scenario, the action of a blanket lockdown now seems more reactive than proactive, and is yet another instance of coercive government action lacking any credible, scientific data, or reason to back it. In fact, quite like demonetisation, this centralised government decision was made first, and the planning process with executive orders put in motion much after. States were clueless and were found reacting to the situation after the prime minister’s announcement.

Even the constitutionality and legality of ensuring such a measure without federal consultation (with other states), or legislative action, calls for a wider debate and response by the government.

Further, as argued recently, coercive government measures like these even in times of a public-health emergency or a pandemic, may only allow authoritarian tendencies to more deeply entrench themselves in official attitudes. The prime minister’s use of words like ‘curfew’ unleashed brutish police action, restricting the mobility of people seeking essential goods and services, and at the same time, made even the lives of many healthcare workers in a health emergency difficult (as seen in areas of Lucknow, Hyderabad, Punjab, Kashmir). 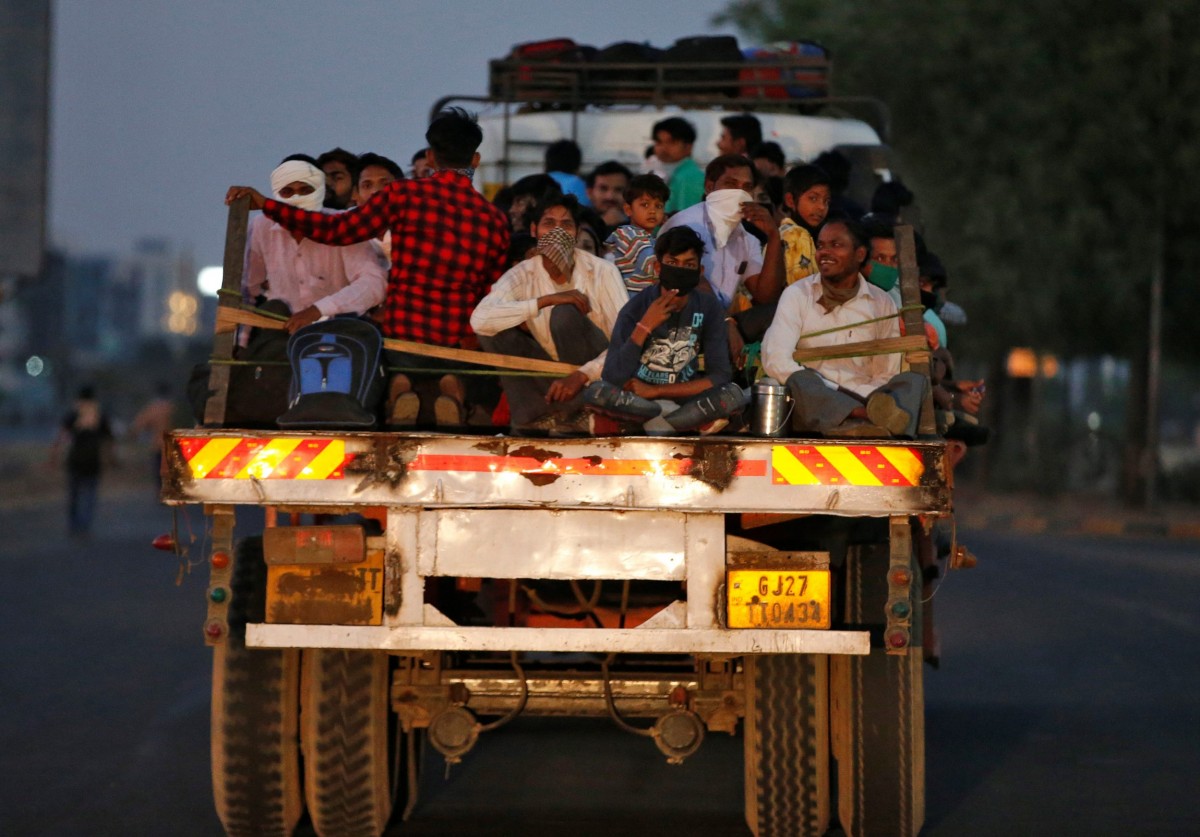 Migrant workers and their families travel in a trailer truck as they return to their villages during a 21-day nationwide lockdown to limit the spreading of Coronavirus disease (COVID-19), on the outskirts of Ahmedabad, India, March 29, 2020. Photo: Reuters/Amit Dave

The second major question is what are the specific economic relief and rehabilitation measures to be undertaken for the most vulnerable workers, including migrant, daily-wagers who have now been rendered homeless and jobless following the three-week lockdown announcement?

Some of the relief steps announced by the finance minister targeting the poor can be availed by only those have access (or are eligible) to claim benefits as part of already present Central government schemes (Ujjawala Yojana for benefits in kind, Jan Dhan Accounts for transfer, BPL card for rations). The Rs 500 monthly transfer to women for three months (beneficiaries under Jan Dhan) is an embarrassingly small sum.

The marginal rise in wages announced for MGNREGA work remains conditional on the actual MGNREGA work taking place, which is suspended due to a lockdown. Most MGNREGA work in villages in fact involves at least 15 or more workers at a work site, and with Section 144 in place, not more than five people can gather in an area (even if they are all observing social distancing).

It is also critical to realise how important the role of migrant labour is in keeping the production costs of many labour-intensive businesses low across states in India. Our domestic comparative advantage has been in ensuring low labour cost because of a flexible migrant labour market.

Even farming activity depends extensively on agri-landless migrant workers. A flexible migrant workforce has been the bulk factor requirement for production in agricultural activity, construction activity, ensuring PDS transfers from one warehouse to a village, small-scale industrial activity in states across India, and in organising (informal) local business activities across cities (including street-side businesses).

With lakhs of workers now reverse migrating to their respective villages, even once the lockdown is lifted, most of these activities (and businesses) in cities will operate on relatively high labour cost, and with low aggregate demand and less cash, most businesses are likely to shut shop and bigger businesses involved with construction work may halt activity for months. Apart from these supply-side concerns, the unemployment rate for most unorganised work (which includes around 93% of the overall workforce) and organised work is anyway going to skyrocket.

And, this takes one to ask the third big unknown: What is the government’s action plan for aiding an economic revival in months ahead?

The RBI did announce an important set of measures through its monetary policy toolkit, which are targeted at ensuring enough liquidity in the financial market and helping banks borrowers in passing through the next quarter. These were important and necessary.

But given how India’s economy was already contracting and suffering from structural concerns of low aggregate demand, low wage growth and high unemployment, the role of monetary policy measures have a limited bandwidth for ensuring the progressive revival of all stakeholders in the economy.

In dealing with a contagious virus, lockdowns can at most buy a society time to be able to respond to a pandemic/epidemic outbreak. However, given the social and economic costs surfacing thus far, the low-testing, tracing and treatment capacity, and with little evidence provided in the public domain to justify a blanket lockdown, it is not clear why the ‘nuclear option’ of a lockdown had to be pressed.

Many other innovative, more contextually relevant (partial) models of lockdown (within targeted geographical regions) could have been considered to make these humanely implementable and keep the costs – and harm caused to lakhs of people –  as low as possible. The jury is still out on this, and the echo behind these questions, is likely to get louder in days and weeks to come.