With resources dwindling in an economy that was already stalling, a carefully considered strategy is needed till economic activity gets back to pre-pandemic levels. 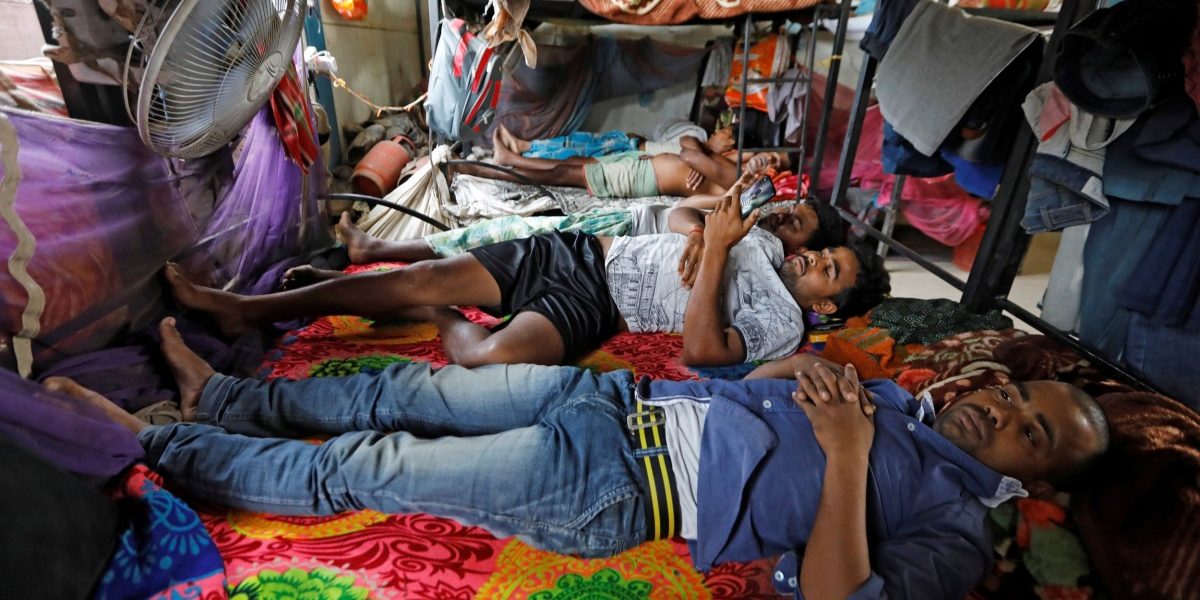 Daily wage labourers rest inside their quarters at a construction site where activity has been halted due to 21-day nationwide lockdown to slow the spreading of the coronavirus disease (COVID-19), in New Delhi, India, April 10, 2020. Photo: Reuters/Adnan Abidi

It is now broadly accepted that to tackle a pandemic, a lockdown of an entire country is needed.

While there may be differences over how stringent the lockdown should be, there is some consensus that without it, widespread community transmission takes place, leading to an overwhelmed medical system and a large number of people dying.

It is said that the peak of the spread (apex) should be below the capacity of the medical system of the country and for this, a lockdown is essential. But a lockdown means that economic activity largely stops and large numbers of workers get laid off and lose their incomes. Since they also have little savings, they cannot even get the basics and sustain their families.

No wonder, many workers have been complaining that even if COVID-19 does not get them, their families may die of hunger.

An optimum strategy is required to support the economy while a lockdown is in place. What can this be? How much support does the Indian economy require?

Economic activity freezes during a lockdown

India’s economy is largely at a standstill, with most businesses shut and millions of workers without incomes or savings to take care of their families. A large number of small and cottage sector units with small amounts of working capital and companies that are highly leveraged are on the verge of collapse. When the pandemic abates, hopefully in a few months’ time and assuming that there is no strong second round recurrence, these businesses will not be able to revive. That is why businesses are demanding a relief package.

The collapse of businesses due to a lockdown afflicts both developed and developing countries. The marginalised everywhere are hurting. In India, hungry and tired workers have been fleeing cities, ready to walk a thousand kilometres. In the US, in three weeks more than 16 million workers have lost work – more than what was lost in the entire financial crisis in 2007-09.

A lockdown implies secession of economic activities, except for the essentials like medical services, medicines, administration to operate the lockdown and essential services and the provision of food, energy, water and sanitary goods. Agriculture can function in the dispersed rural areas. However, as currently in India, labour shortages due to the lockdown are hampering farm operations. Empty roads, a dramatic fall in the consumption of petro goods and a sudden improvement in the quality of water in rivers and of air in cities implies that production, trade and transport have come to a grinding halt.

It is quite likely that the Indian economy currently may not be working at more than 25% of the level that it was before the COVID-19 pandemic.

Globally, stock markets have entered a bear phase with declines of more than 20%, despite central banks flooding the markets with liquidity. This signals weak investor sentiment. Other asset prices, like of real estate, will also decline. So, the wealthy will suffer big losses and cut back both consumption and investment in spite of monetary policy increasing liquidity and cutting interest rates.

Factories need workers to produce. Offices that have public dealings need employees at their brick-and-mortar offices. Much banking can now be done electronically but still, officers are needed for support functions. In a BPO, people have to be at their desk. Many self-employed like barbers and locksmiths have to be in their establishments. In a lockdown, all this would stop. Further, modern day production is interlinked backward and forward so when some economic activities stop, it impacts others also and the impact is magnified.

So, there is a collapse in demand. Many businesses, including many finance companies, will fail. This would be especially the case with the large number of small and cottage sector units working with little working capital. There would be a substantial loss of employment and further collapse in demand. With many workers migrating from the producing centres to their villages and their return uncertain because of the fear factor, restarting many of these businesses would be difficult.

Businesses asking for a stimulus

During a lockdown, revenue of businesses falls drastically since there they can’t produce or sell. But their fixed costs and interest on their loans remain. Furthermore, they have also been asked to pay wages by the government. If they have reserves they can meet these costs for a little while – but that does not mean that they are not incurring losses.

To cover their losses, at least partly, businesses want the government to give them money and call it a stimulus. But businesses cannot restart factories or their offices during a lockdown, when everything is closed. If the lockdown is brief, of which there is little sign, businesses may restart, but that too not immediately.

Also read: With the Lockdown Extension Coming, It’s Time to Turn Our Attention to the Economy

If a stimulus is to be thought of, it should be after the lockdown is lifted and some businesses start functioning while maintaining physical distancing. If money is given to businesses during a lockdown, the fiscal deficit will rise without any boost to the economy. If the fiscal space is exhausted now, then later it will be more difficult to give a stimulus.

Fiscal space available for a stimulus

So, how much fiscal space exists today? It is likely that during the lockdown, the economy can only work at about 25% of last year’s production level. Assume that the lockdown lasts for two months, as was the case in China. After that let us assume that the economy gradually recovers to the pre-pandemic levels (though that is doubtful) in six months. Then the GDP will be down by about 25% over last year’s level. So, instead of being about Rs 200 lakh crore, it would be about Rs 150 lakh crore. Since the production over most of the period will be of essentials which either have no indirect tax or a low rate of tax, the tax collections could be down by more than 40% over the lower base of GDP.

Tax collection in India was about 16% of GDP last year so it could be about 10% of GDP this year. Calculated on the lower GDP, it implies that tax collection will be down by Rs 17 lakh crore. Non-tax revenue will also be down by similar proportions.

If revenues come down so drastically, the combined fiscal deficit (Centre and the states together) will rise by 11% of GDP to about 21% of GDP. At a minimum, the poor who have lost work have to be helped to stay alive. Over eight months, till the economy comes back to pre-pandemic levels, in the most optimistic scenario, this would require Rs 18 lakh crore. So the fiscal deficit would become 33%. Extra funds will be required to fight the pandemic both administratively and medically, and no estimate of that is available but the deficit will further increase.

Also read: How Will Modi and the Chief Ministers Get Us Out of the Coronavirus Chakravyuh?

The government will not be able to meet its obligations of interest payment, salary, defence and so on. It will have to cut these routine expenditures to meet the minimum obligation of helping the population survive. There will be no money to either give to businesses to stay afloat or grant them tax cuts. At least not immediately and anyhow, these steps would not help the economy revive during a lockdown.

The government may have to sustain businesses, especially the small and cottage sector ones through giving them interest free loans and writing off the loans that may be due during lockdown. To raise resources to fund its huge deficit, the government will have to borrow from wealthy nations and banks (which have huge surpluses since demand for credit has dried up) at very low interest rates. Other innovative ways will have to be thought of to raise resources while the economy is largely shut so that people can survive.

In other words, with resources dwindling in an economy that is stalling, a survival strategy is needed and not a stimulus which will not work at present.