While the state government runs a free sanitary napkin distribution scheme, there is no accountability for the fake organisations thriving in the region. 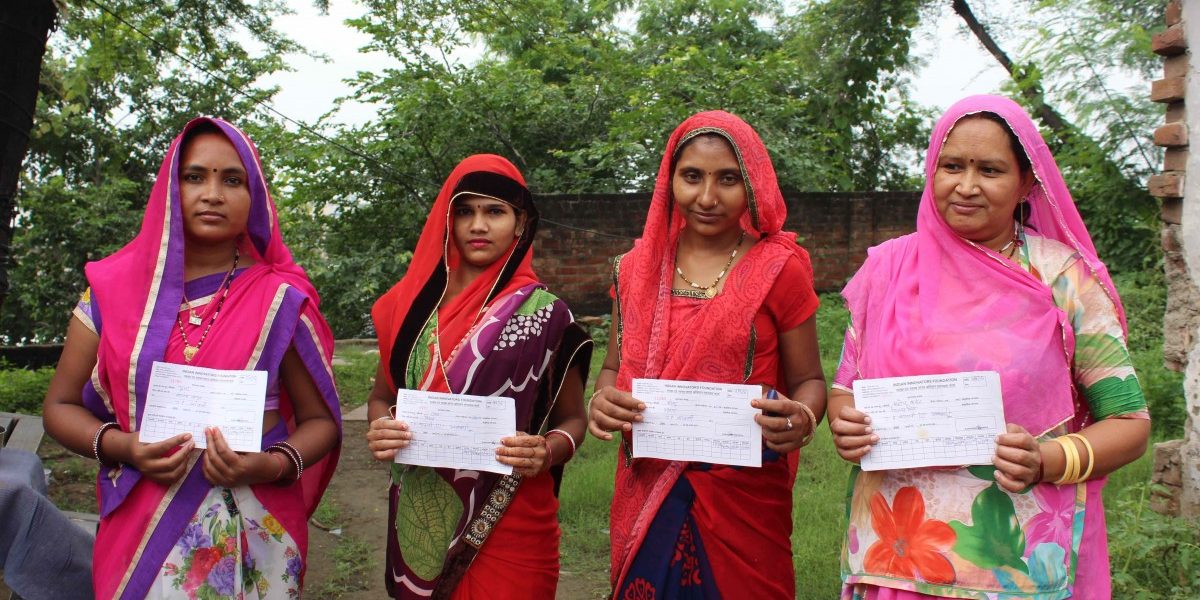 Local women holding the membership form given by the organisation for free sanitary napkin for three years. Credit: Shruti Jain

Jaipur: Claiming to be part of one ‘Swacch aur Swasth Bharat Abhiyaan,’ representatives of a non-profit organisation called Indian Innovators Foundation Charitable Trust collected money from thousands of women under anganwadi centres in Jaipur in 2016, supposedly for membership to the programme. The organisation promised the women that the membership would fetch them free sanitary napkins for three years.

However, after distributing three packets of sanitary napkins, members of the organisation mysteriously disappeared and despite several complaints by the anganwadi workers to their department, the matter has remained unheard.

In 2016, when anganwadi centres in Jaipur were asked by their child development programme officer (CDPO) to organise a meeting between a delegation of the programme and women from their areas for free sanitary napkin distribution, there was no reason for suspicion since a similar scheme had already been enforced in the state.

“We don’t allow any organisation or supplier when they bring out any offer for our anganwadi women until we have written orders to do so. But that time our CPDO, Damyanti Sharma [now retired], instructed us to hold a meeting of an organisation with the women at our respective centres and we had no option but to agree,” Vijayata*, an anganwadi supervisor told The Wire.

“In the meeting organised at the anganwadi centres, the organisation asked the women to make a one-time cash payment of Rs 200 for Swachh Bharat Abhiyan membership required to receive the supply of free sanitary napkins for three years. We assumed it to be a part of the scheme that the state government was already running for women and readily agreed to pay,” she added. 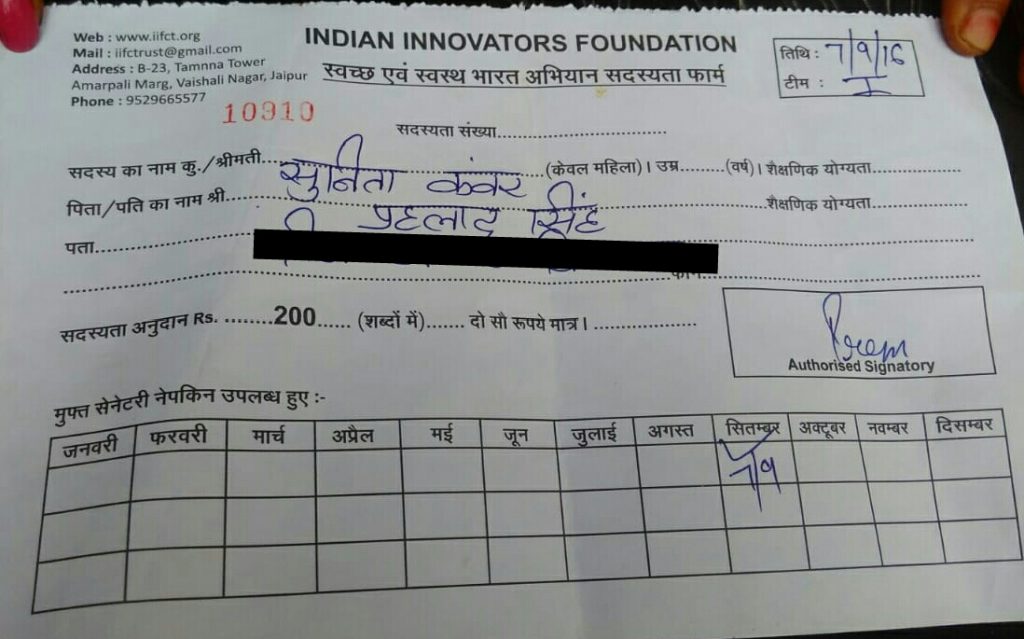 The membership form that the organisation gave to the women. Credit: Shruti Jain

The organisation convinced women at about 50 anganwadi centres in Jaipur that it was associated with the government and asked them to become paid members of the ‘Swacch aur Swasth Bharat Abhiyaan’ in order to receive free sanitary napkins for three years.

“When we had gone to the collectorate for a video conference, this woman from the organisation caught us outside to talk to the anganwadi workers of other centres. She told us that she had also come there for a meeting with the officials so as to make us believe that her organisation was associated with the government,” said Pooja*, an ASHA worker.

The local women believed the organisation as it was operating from the anganwadi centres they had faith in.

Saroj Kanwar, a local woman from Jaipur who got herself registered with the organisation, said, “They came here for a meeting with all the women of our anganwadi and told us if we would deposit Rs 200 for Swacch aur Swasth Bharat Abhiyaan membership, we’ll receive free sanitary napkins for three years.”

“Hundreds of women from our locality deposited the money for membership the next day itself. They distributed a packet twice but then the distribution stopped. Later, we were told that the organisation was fake and took away all our money. Even the napkins were not of good quality,” she added.

This incident severely damaged the trust the local women had in anganwadi centres. They believe that the workers colluded with the organisation to dupe them.

“For at least one year, the women who had deposited the money for free sanitary napkins came every day to enquire if there is any information about the organisation. Some even think that it was our plot to take away their money,” said Leela*, another anganwadi worker in Jaipur.

“It’s easier for our seniors to recommend any organisation without any background check, but it is us who deal with the public at the grassroots level and face consequences if the public suffers. In the eyes of the women of our anganwadi area, we have become thieves.”

While a dedicated website of the organisation – whose representatives had come to meet with the women in Jaipur – does exist, when The Wire made multiple attempts to contact them on the information provided, there was no response. The number listed on their website repeatedly gives the message that the dialled number is either switched off or out of coverage area.

Their website describes the Indian Innovators Foundation Charitable Trust as a “public charitable trust & NGO in The India [sic], governed by the public trust act of the Delhi [sic] under a board of trustees.”

According to Lata*, an anganwadi worker from Jaipur, “After the delivery of sanitary napkins stopped, we kept calling the lady who was negotiating with us on behalf of the organisation but never received any reply.”

“We somehow managed to get her address and when we went there, her husband told us that their partner had backstabbed them and they have suffered a huge loss because of which they couldn’t keep their promise of distribution of free sanitary napkins. We informed our CPDO about the incident and even made complaints in the collectorate, but the officials didn’t pay any heed. After running around to be heard for a year, we gave up.”

Officials say the department is not accountable if the women themselves pay to seek the benefit.

Speaking to The Wire, Roli Singh, secretary in the Ministry of Women and Child Development in Rajasthan, who is heading the Menstrual Hygiene Scheme of the state government, said, “That must be some independent marketing which isn’t part of the scheme. There is a market and we are not here to police the market. If there is a demand, there will be supply. If people are willing to pay, they are free to do so.”

Retired CDPO Damayanti Sharma was not available for comment and the current CDPO of Jaipur, Mahesh Sharma, said, “No such incident has been reported to us.”

The Vasundhara Raje government in Rajasthan in 2015 launched a free sanitary napkin distribution scheme meant primarily for rural areas. By March 2016, the scheme was covering all the districts of the state.

In the same year, thousands of these women from anganwadi centres in the capital were fooled into making payments for sanitary napkins.

*Names have been changed to protect the identity of the anganwadi workers.