In Locking Kashmiris Up While Changing Their Lives, Modi Mirrored Indira's 1983 Assam Move

The manner in which the Illegal Migrants (Determination by Tribunals) Bill was passed in the parliament, with little heed to the people of Assam, reflects the underlying similarities of both the regimes.

New Delhi: In the heat of the Centre’s shocking move in parliament on August 5 to snatch away from Jammu and Kashmir the special powers it had enjoyed since Independence under Article 370 of the constitution, one significant sideshow was overlooked by most.

Following in the footsteps of the career politicians that our MPs and MLAs have increasingly become today, Congress’s chief whip in the upper house, the very man who is supposed to keep the party’s flock in line – Bhubaneswar Kalita – suddenly resigned from the Rajya Sabha.

I have resigned from the Rajya Sabha membership today. #Assam

Not too many were surprised.

The objective was clear. Kalita, once joined by two other such MPs who also flouted party lines and submitted resignations, made it possible for the ruling National Democratic Front (NDA) to acquire the required numbers for the Jammu and Kashmir Reorganisation Bill, 2019, in the upper house, by the end of the day.

Kalita, a former Assam Congress chief and a minister in the former Tarun Gogoi government should find a place in a footnote of the country’s political history alongside two earlier Congress heavyweights from the state – Dev Kant Barooah and Fakhruddin Ali Ahmed. The two Assamese Congress men had been close to where power was centred in their time – Indira Gandhi – and offered her with obligatory backing when she went ahead with the decision to declare Emergency. Barooah was the national president of Congress and Ali Ahmed, the country’s president who signed the government order.

Kalita too has sidled close to the centre of power and one just only has to wait to see what political rewards are in store for him.

Although there is a strong rumour about him joining the Bharatiya Janata Party, Kalita told reporters on August 5 that he has not quit the Congress yet. In the Lok Sabha election, Kalita lost to the BJP candidate in Mangaldoi.

It must be mentioned here that Barooah, who had gone down in history for his infamous line, ‘India is Indira, Indira is India’, left this very Indira’s side after she lost the 1977 general election to the Janata alliance and joined the Indian Congress (Socialist).

Aside from the similarity of these footnotes of history where these three Assamese politicians would find their place, one can also see resonances of the Kashmir proposal in the passage of a crucial bill concerning Assam.

The year was 1983 and the Illegal Migrants (Determination by Tribunals) Bill was going to be passed.

The bill was brought by the then Congress government, on the advice of some of its state leaders. On the face of it, it was intended to provide protection to those people who were vulnerable to the growing anti-migrant agitation in the state. As per the bill, a person accused of being a foreigner would be given due recourse of judicial process, through tribunals. The onus of proving that a person is an “illegal immigrant” would be on the complainant.

The bill, for all its pros and cons, became a step, with the approval of Parliament, that went on to create a huge rift between the communities that make up the delicate social fabric of Assam.

This Bill, upon becoming a law, hardened the positions mainly among the supporters of the anti-migrant agitation, and ultimately brought the entire community of east Bengal-origin Assamese Muslims or Miya Mussalmans under a long shadow of suspicion. 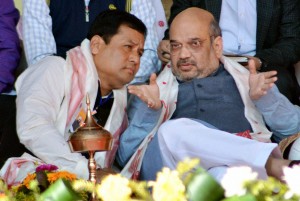 The effects of the legislation are still palpable on the ground. The present chief minister, Sarbananda Sonowal, was accorded the title of Jatio Nayak (the hero of the community), for challenging the Act in the Supreme Court as a student leader, and getting it scrapped in 2005.

However, the idea behind referring to the Bill is also to highlight how it was passed in Parliament by the Congress regime.

Due to the anti-foreigner agitations in Assam, during the 1980 general election, polling could not be held in 12 of the 14 Lok Sabha constituencies of the state. This means that there was no people’s representative from the Assamese heartland of the Brahmaputra Valley in that Lok Sabha.

Besides, Assam, like Kashmir now, was then under President’s Rule. However, Indira too ignored these crucial facts and on December 12, 1983, introduced the bill. This too was passed through Parliament by the end of the day, thanks to the strength of the majority her party enjoyed then.

This particular action of the Congress government, and the ham-handed manner in which it went for assembly polls early that year in the state — against the wishes of the majority of the state’s population — not only led to massive violence, including the Nellie massacre, but also cemented the divide between majority and minority communities, the ugly repercussions of which are still visible.

The parliament must take responsibility in this development in the socio-political landscape of Assam, just as it must for passing the Jammu and Kashmir Reorganisation Bill, 2019, without allowing the voices of the people of the region it affects the most to be heard. 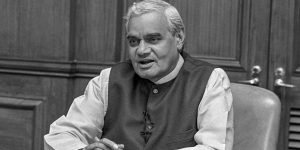 The same Atal Bihari Vajpayee whose party brought the Kashmir legislation had criticised the Congress government in Assam. Photo: PTI/Files

The Assam episode highlights that no matter how problematic it may be, in a democracy, the voices of the people whose present and future is being decided will have to be heard by the government of the day. Solutions needed to be found on democratic lines by engaging with all the stakeholders at the risk of spouting another period of unrest.

A glaring example of a government not paying heed to what its people had to say about an issue was seen during the Congress regime in Assam in 1980. After the press censorship called for by the Emergency ended, the move to curtail press freedom was repeated by the Syeda Anwara Taimur-led government. Like its present-day Kashmir counterpart, the local press was accused of supporting the agitation and was even barred from reporting on parliamentary proceedings.

Then Rajya Sabha chairman M. Hidayatullah had asked the Assam government to at least allow coverage of discussions concerning the state in parliament. Ultimately, in May 1980, the Gauhati high court struck down the prohibitive order.

Back then, Opposition MPs like George Fernandes, Ramakrishna Hegde and Atal Bihari Vajpayee would call the Congress regime in Assam in a state of “undeclared Emergency”.

The late Vajpayee’s party, on August 5, effectively locked up the people of an entire state, bifurcated it into two Union Territories without their consent and took away the special powers the constitution had granted them. A large section of people in Ladakh may have been in favour of the Union territory move but did the rest of the people of Jammu and Kashmir, mainly those in the Valley, want it?

In other words, what Indira did in Assam in 1980 was bettered by Prime Minister Narendra Modi in Kashmir three decades later.

On August 5, history not only repeated itself but did with unprecedented gusto when it came to silencing people’s voices in the world’s largest democracy.