In Lockdown, Tamil Nadu's Amma Canteens Rise to the Occasion

These subsidised government run eateries are serving as a lifeline for the poor, especially migrant workers, as the state is under a 21-day lockdown. Workers at an Amma Canteen in Chennai on the first day of the national lockdown. Photo: Dinamani

Chennai: Her day started at five in the morning. “I had to wake up at least an hour and half before that to be here at five” says Vasanthi, working at an Amma Unavagam at Ashok Nagar in Chennai. “I take a share auto to be here at five, but since I couldn’t find any today, I walked.”

Vasanthi stays two kilometres away. For her and nine more women working at the Amma Unavagam on two shifts – all from a self-help group – today was more challenging, and rewarding, than ever before. But they were well-equipped to handle the crowds. On the first day after the lockdown was in place, this branch of the Amma canteen network alone made over 600 idlis in the morning and pongal for about a few hundred people. The lunch – Sambhar rice, lemon rice and curd rice – was also getting ready for a few ‘extra’ numbers.

The women say they have been instructed not to encourage crowds. And since the consumers are mostly from the locality, they check in for crowds and only then come to eat.

“There are always more demands for chapati and dal in the evening. Today we expect greater demand” says Vasanthi. The women have pooled in some money to buy masks and sanitisers for themselves. “There won’t be compromise on quality even if it means we have to shell a bit from our own pockets in times like this. After all, we too have our food here” says Renuka Devi, the leader of the SHG running this branch. “We do it just as we cook at home, because we also eat here”. 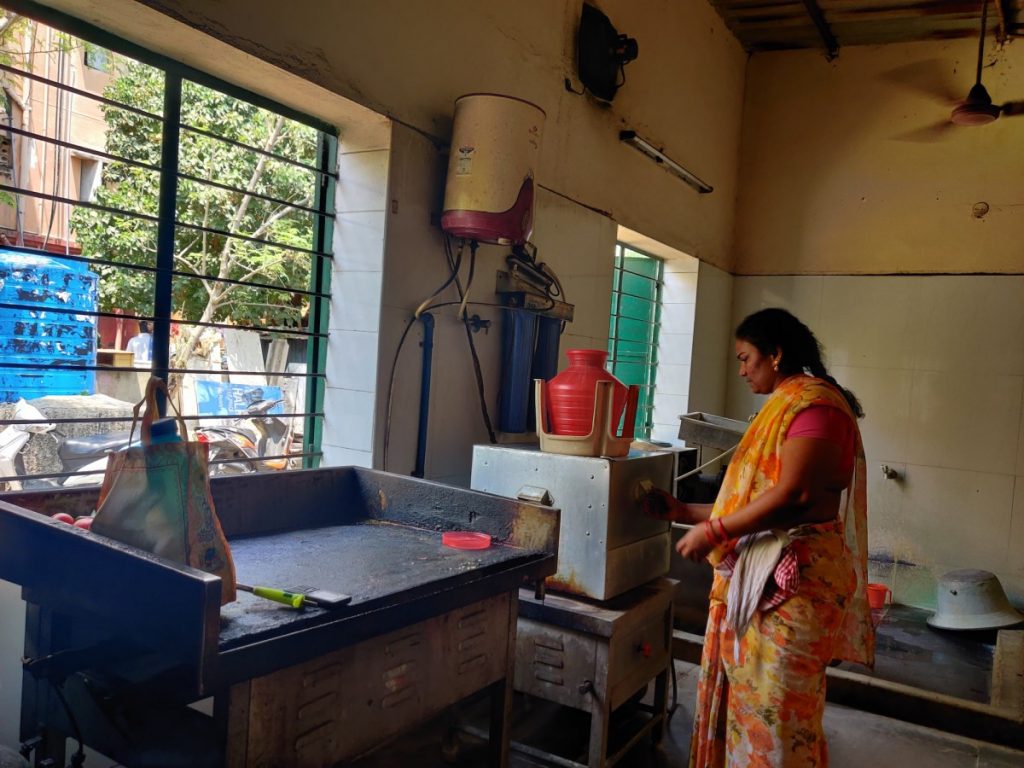 The kitchen at the Amma Unavagam in Ashok Nagar, Chennai. Photo: Kavitha Muralidharan

When launched by the then chief minister J Jayalalithaa in 2013, the Amma Unavagams earned their own share of criticism with many calling it a ‘stunt’ and that it led to losses for the government. Yet , in his book An Uncertain Glory – India and its Contradictions, economist and Nobel laureate Amartya Sen devotes almost ten pages to extolling the idea. Several states including Odisha, Karnataka and Andhra Pradesh set up their own versions of Amma Unvagams, after witnessing its success in Tamil Nadu.

“We have had at least one visitor every day who is grateful that Amma Unavagam exists. They would otherwise go hungry” says Renuka Devi.

The food offered at heavily subsidised prices – idli at Re 1 each, pongal for Rs 5, lemon and sambar rice for Rs 5, curd rice for Rs 3 and two chapatis with dhal for Rs 3 – is a boon for people from the marginalised sections of society. With a relatively well-maintained kitchen and a tidy little space with tables that are frequently cleaned, “all kinds of people” come in for their meals, Vasanthi says. Provisions are provided to the Amma Unavagams by the government.

The small team headed by Renuka Devi is very particular about keeping the place clean. “The customers are asked to rinse their plates, but after that we wash them in hot water again just to be sure. We take no risk,” she says, pointing to a little child having curd rice with his mother, a member of the team. “We need to provide good and clean food for him, and for everyone else.” According to Chennai Corporation Commissioner G Prakash, all the women in charge of the canteens are trained in hygienic practices. 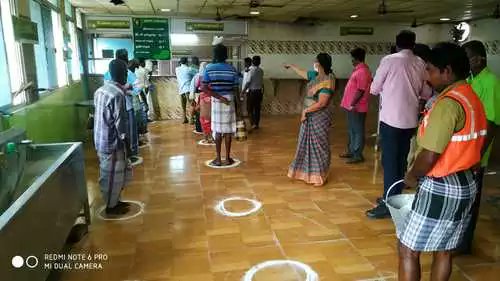 The Greater Chennai Corporation has announced that sanitation workers will get food at Amma unavagam for free during the lockdown period. “It is the least that we could do to them, they are the real heroes today” says G Prakash. Amma Unavagams, he says, are a great asset now and have always been so. “We have 407 canteens, which are now adequately stocked for at least 30 days. We have ensured that things are on track” he told The Wire.

Amma Unavagams across the Tamil Nadu have reported an increase in sales since the announcement of lockdown. “There is definitely an increase in Chennai too. Every canteen has the potential to cater to 2000 to 3000 people every day. All the canteens can together cater to about 10 lakh people. We have equipped them to cater for more,” says Prakash.

He adds: “The most important and great thing about amma unavagams is their geographical distributions. Every ward has two canteens, which means there is an amma unavagam for every half kilometre.” Which also means the canteens do not allow take-aways. “We do not want this to be misused. Anybody can walk for half kilometre to have their meal” says Prakash.  “Amma Unavagams will be a very strong backup system and will be a saving method for people in need.”

J. Jayaranjan, a Chennai-based economist and an expert in food security, says the Amma Unavagams will always be important for they cater to the urban poor. “Their vulnerabilities have largely remained unaddressed. The social protection schemes meant for migrant workers hardly reach them. We should also remember the gap in the labour market in recent years was being filled by them. They wouldn’t want to spend huge money on their food. For them, an Amma Unavagam means they could have a decent, fulfilling meal.” The idea of providing chapatis was an important measure in this context, he says.

Jayaranjan also acknowledges that in crisis periods like this, Amma Unavagams can only become busier and more important than ever. “Imagine, all factories and shops are closed and there are no trains for migrant workers to go back home. The announcement for a country wide lockdown came all of a sudden yesterday, where would all the migrant workers go?”

Although Amma Unavagams were slowly losing their patronage and being allowed to die a slow death,  Jayaranjan says crises like this reiterate the significance of such systems.

This is the second time that Amma Unavagams have effectively responded to a crisis. When Chennai was hit by Cyclone Vardah in December 2016, the canteens remained open across the city, providing free food to anyone who came in. With the coronavirus-induced lockdown leaving many daily wage labourers stranded, this important food security programme promises to rise to the occasion again.