Far from determining any legal violation, on each date of hearing, the court has instead directed the government to consider heavy-handed proactive censorship. 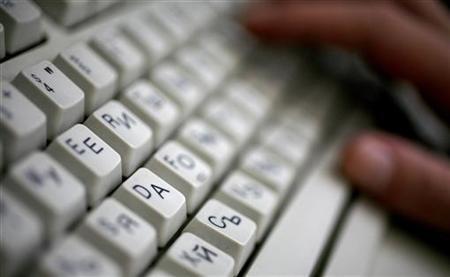 An employee types on a computer keyboard with both Latin and Cyrillic letters in Sofia June 23, 2008. Religiously devout Jews barred by rabbis from surfing the Internet may now "Koogle" it on a new "kosher" search engine, the site manager said on Sunday. REUTERS/Stoyan Nenov The online advertisements for sex determination kits case could lead to the creation of terrible Internet regulations. Credit: Francois Decaillet, Flickr, CC BY 2.0

In the first week of July as the monsoon approached Delhi, the Supreme Court thundered, “It is not acceptable and this needs to be controlled. They can’t put anything which is against the law of the country.” These observations were made last week during the hearing of a public interest petition against Google and Yahoo. The petitioner, a renowned gender activist, Sabu Mathew George approached the court alleging that online search engines display advertisements for the sale of sex determination kits online.

This case, however, has all the ingredients for a perfect storm: A technical misunderstanding of how online advertisements work,  an incorrect application of the law and the best of intentions. There is a very real possibility that the outcome will create a new set of terrible Internet regulations.

The popular interest in such a case is undeniable. Abortions of female fetuses have reached alarming proportions leading to incredible gender disparity. As per the 2011 census there are 943 females per 1000 of males. Studies show such a wide gap prompts gender discrimination leading to social misogyny — even sexual crime. It is only proper for the sub-committee of the erstwhile Planning Commission to call it a, “demographic disaster”. According to the petitioner Sabu Mathew, this problem is becoming dire as gender determination kits can be ordered online. Such kits do not require visits to the hospital or an expensive ultrasound scan of a pregnant woman’s belly. In the privacy of home, a person can type in the string, “boy or girl” and a search engine instantly provides the detail of vendors who sell sex determination kits. The Supreme Court seeks to prevent this.

On its face this appears to be a healthy argument but it lacks muscle. The applicable law, which the petitioner has sought to enforce, is Section 22 of the Pre-Conception and Pre-Natal Diagnostic Techniques Act, 1994. It places a criminal penalty on anyone who “displays” any advertisement for any technique that can lead to determination of the gender of a fetus. It is widely phrased with, “advertisement” including a document in any form: even a communication made through smoke and gas. Ordinarily, such wide phrasing would make the search engines liable but that would be disregarding the Information Technology Act, 2000 which grants them a conditional immunity.

The Information Technology Act, 2000 is India’s comprehensive law governing the Internet. It was amended in 2008 inter alia to provide robust intermediary liability provisions. It applies to online platforms such as Facebook and Google since they are passive pipes that serve as conduits. They are neither the originators nor recipients of the messages. Comparable to a telephone company, the legislature made a policy choice in not making them liable for the legality of the content that they distribute and publish. It reasoned that the same rules should apply to Airtel and Facebook when bomb threats are made through them. The person who makes them on a phone call or on a webpost is liable, not the medium transmitting the message.

The Supreme Court was aware of these policy considerations in the momentous Shreya Singhal judgment when it read the intermediary protections broadly. It observed that a platform like Facebook or Google is immune from legal prosecution if it complies and removes information on receipt of actual knowledge of the illegality of the content. A notification of illegality could only be made through an executive or court order. Such procedure presumes a court making a legal determination on a specific piece of content rather than leaving the decision to an intermediary. The court’s reasoning is made clear in Shreya Singhal when it cautions against vesting judicial functions in online intermediaries. Both statute and precedent today contain nuanced policy considerations that are threatened by a well-meaning desire to prevent female foeticide.

Successive orders and a censorious posture

The orders of the Supreme Court in Sabu Mathew’s case highlight this danger. Since the case has been pending for sometime, the Supreme Court has come to pass several observations and directions over the years. It first proceeded in December 2014 by admonishing the Centre for showing “helplessness”  even though the government stated an accurate technical and legal position. The Centre had said in its counter affidavit that search engines index existing websites through an automated process where they are considered intermediaries. But when they sell sponsored links they become authors and may be held liable. It also stated that suggested that mass blocking may not be practical, and individual complaints can be investigated. This has been repeated by it in future while asking the petitioner to hand over a list of websites that may offer sex determination kits. These submissions, however, were not “appreciated” by the court.

In December 2014, the Supreme Court inquired whether the Centre had “any device to see that”  intermediaries “can be controlled not to show anything on their website which would violate Indian law”. This line of reasoning ignored that computer algorithms have the technical capability to block but would still require specific directions on individual webpages by a legal authority. It also ignored the example of China which by most estimates, has the world’s most sophisticated technical system of censorship but still employs thousands of human censors to implement it. Such a system would be an anathema to the Constitution of India specifically the fundamental right to freedom of speech and expression. But the court has proceeded further. In January 2015, it explored a proposal for key word filtering. Such an automated filter would block and censor large amounts of legitimate, legal content. For instance an automated ban list containing the phrase, “sex determination kit” will block access to the orders of the Supreme Court passed in this case. These methods of censorship seem to be under active consideration.

A difference between popular and public interest

By its last order the court has directed the government to convene a joint meeting of technical experts with these search engines observing, “in the name of intermediaries [they] cannot put anything that violates the laws of this country”. With respect, till now the Supreme Court has failed to determine a violation of law. It has kept the case pending issuing directions expecting a mass censorship system to be proactively implemented based on a vague understanding between the government and private intermediaries. Further, the court has avoided determinations on interpretations that arise from reading the Pre-Natal Diagnostics Act, the Information Technology Act and the Shreya Singhal Case. On each date of hearing, it has directed the government to consider heavy-handed proactive censorship on private intermediaries.

Entering the policy thicket, the court is making choices contrary to statute and precedent as it displays a lack of understanding of how the Internet works. While the Supreme Court is not expected to be an expert on the technical functioning of the Internet, one does expect it to apply existing law with fidelity. It is only hoped in future hearings the desire to correct India’s awful treatment of women is tempered by public rather than popular interest.

Apar Gupta is a lawyer practising in New Delhi, India. His Twitter handle is @aparatbar.