While an inquiry has been initiated against Shah Faesal from J&K for a single tweet, no action has ever been taken against Rajasthan IAS officer Sanjay Dixit, whose inflammatory posts regularly promote fake news. 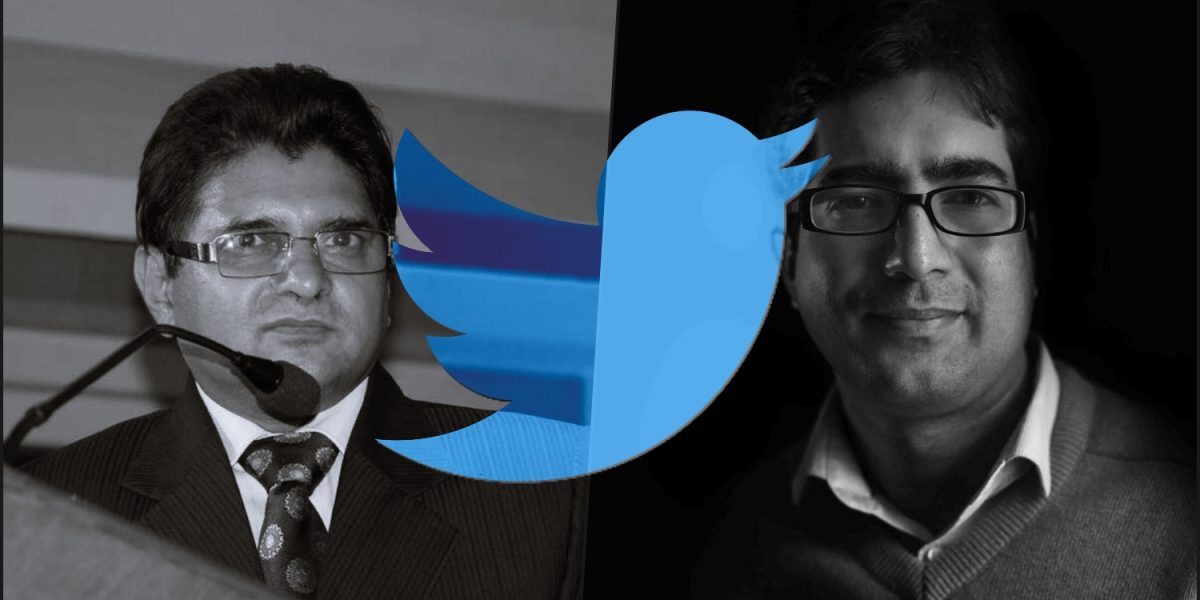 New Delhi: At the Centre’s request, the Jammu and Kashmir government has initiated a departmental inquiry against IAS officer Shah Faesal – topper of the 2010-batch IAS exam – for a tweet expressing his anguish at incidents of violence against women.

This isn’t the first time the Centre has invoked the All India Services (Discipline and Appeal) Rules, 1969,  against a member of the Services. In February, the Home Ministry wanted IPS officer Basant Rath disciplined for writing columns “dangerously critical of government policy”.

While it is unclear how Faesal’s tweet violated any guidelines, the Narendra Modi government’s action against him is in stark contrast to its silence over another IAS officer’s social media postings which appear to more directly violate service rules.

1986 batch IAS officer Sanjay Dixit, who is posted in Rajasthan, is infamous for sharing fake news and posts with communal undertones and even criticises Modi government’s policies (from the Right) on Twitter. Here’s just two of many examples of Dixit questioning policies adopted by the BJP government to deal with internal and external issues: In August 2017, Dixit was called out on Twitter for sharing fake news published by PostCard.News. 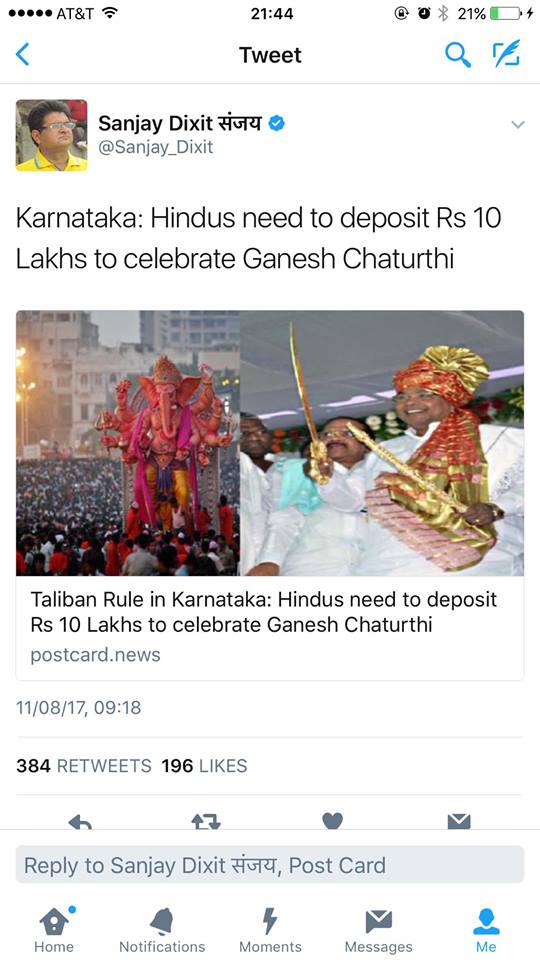 In the same month, he shared another PostCard.News story about unpaid electricity bills of Jama Masjid. Spoiler alert: This story was fake, too! It was later debunked by AltNews.in. You can read it here. 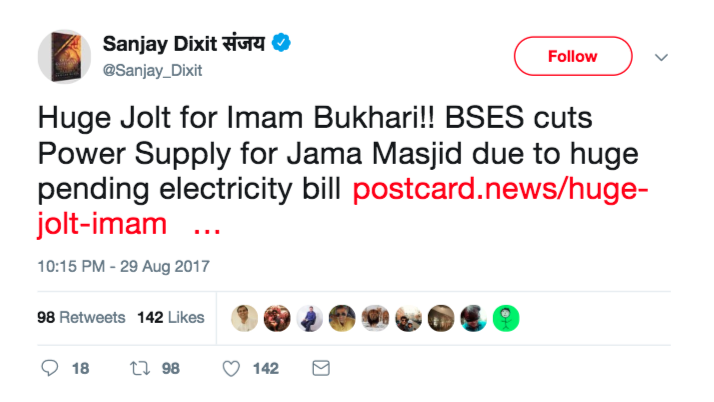 PostCard.News is a website that churns out fake news on a daily basis and continues to flourish thanks to support from ministers and members of the ruling party. In March, the Mumbai Police called out Dixit after he shared a fake news story published by right wing website Opindia. Four days after being publicly shamed, Dixit tweeted a 2013 photo of protestors pulling down a statue of former PM Rajiv Gandhi in Andhra Pradesh, and wrote: “Communists of Tripura broke and dismantled Rajiv Gandhi’s statue in 2008. Did you hear a squeak from anyone, even from the party who elected him as PM? Nobody uttered a word. That is why the present outrage is purely hypocritical. I support removal of Lenin statues by law”

This fake news, too, was later debunked by AltNews.in. But Dixit didn’t bother to take down his tweet.

Dixit also has a tendency to retweet garden-variety bigots and amplify their voices: 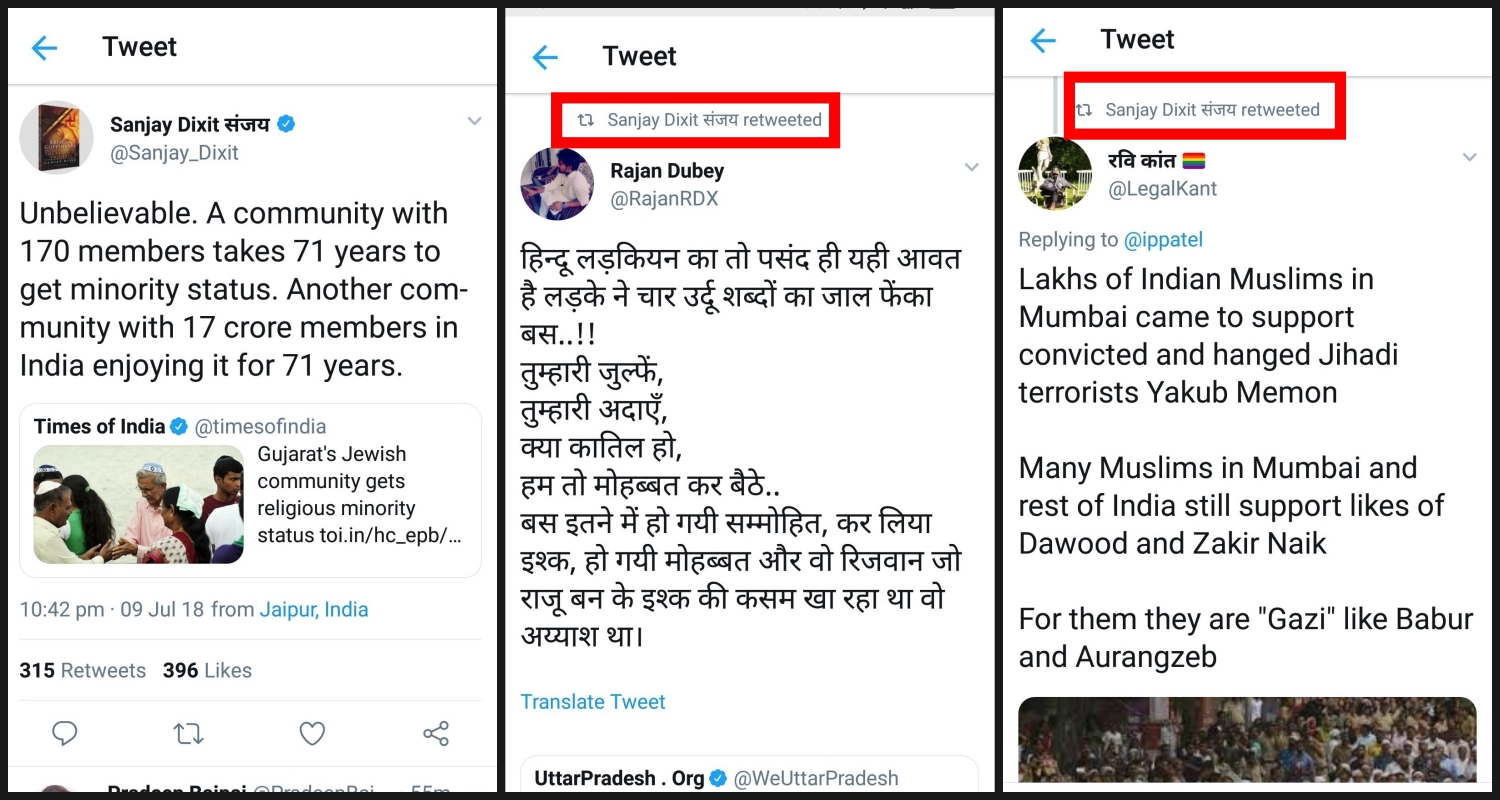 “Meanwhile, Islamic State of West Bangladesh declares the longest Eid holiday ever — a full 5 days of free salary and compulsory holiday for the faithful and infidel alike,” he had tweeted. He later deleted the tweet after getting called out by Kolkata Police on Twitter.

Dixit is also a columnist for The Print website and Swarajya.

Meanwhile, senior IAS officer Ashok Khemka came out in support of Faesal and tweeted: “Many misinterpret service rules. Service rules do not make you a servant of the ruler. Service rule is a code of conduct for an employee to abide by Constitutional principles and rule of law, equity, justice and good conscience.”

His tweet does not say so.
Many misinterpret service rules. Service rules do not make you a servant of the ruler. Service rule is a code of conduct for an employee to abide by Constitutional principles and rule of law, equity, justice and good conscience.