Honour is essential to a professional army. But the top brass in Indian defence, at both the military and the ministry level, seem to have forgotten that. 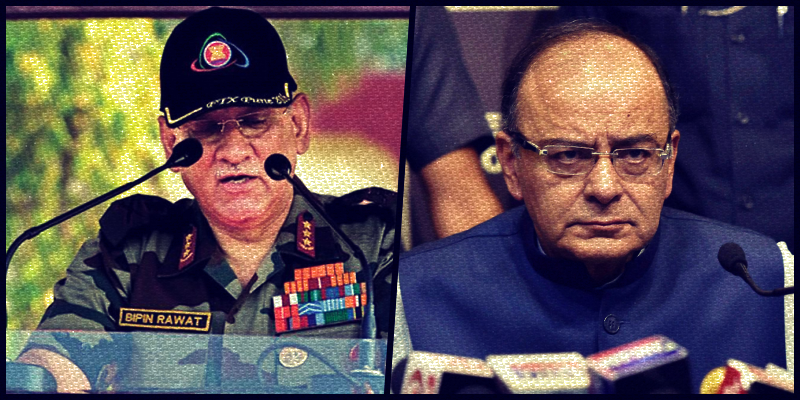 The damage to the army comes not as much from the acts of Major Gogoi as from the subsequent declarations by the chief of army staff and the defence minister. Credit: PTI

Earlier this week, Major Leetul Gogoi’s decision to use a human shield in Kashmir led to him receiving a chief’s commendation card, without a citation sent by his unit and outside the traditional dates for giving commendations, August 15 and January. Responding to Gogoi’s actions, defence minister Arun Jaitley said that in such war zones, the soldier must be allowed to act as he sees fit. In my opinion, these two events are as clear a signal as is possible that the present leadership is about to trigger massive cracks in the army, which is already suffering from a loss of institutional values. While this onslaught may appear slight, it is qualitatively different from anything the army has seen before. With the blessings of the top leadership at both the military and defence ministry levels, it could prove to be fatal.

The legal and ethical angle of using a human being as a shield has been well covered in the media. Of course it is wrong to do so. But in addition to the legal and human rights approaches, let’s talk about the possible effects of such changes on group cohesion and fighting effectiveness with the army.

There are various misconceptions in what has been said about these recent events. First, the situation surrounding this act was not really war. Escorting a convoy through a group of stone pelters is not exactly the same as storming the gates to Lahore, assaulting Pt 4660 (Tiger Hill) at Kargil or even storming a house with two armed terrorists inside. In the prevailing environment in Kashmir, stone pelting is the least of the risks. Till now, there is no precedent of soldiers being killed by stone pelters – not even one. Second, this was not a situation which the major was faced with out of the blue, forcing him to think ‘out of the box’. Rashtriya Rifles officers tackle stone pelters every day in the Valley, so surely there must be detailed guidelines on how to deal with this in the army. Was tying a person to a jeep part of those guidelines? If not, what are the guidelines? Third, the damage to the army comes not as much from the acts of Major Gogoi as from the subsequent declarations by the chief of army staff and the defence minister.

Since times immemorial, the concept of honour has been essential to professional armies. The US Military Academy code is ‘Duty. Honour. Country’.  In our own  Indian Military Academy (IMA), the Chetwode motto mentions ‘honour’ in the top two priorities from any officer: “The safety, honour and welfare of your country come first, always and every time. The honour, welfare and comfort of the men you command come next (emphasis added).” In the IMA as well as the National Defence Academy (NDA), there is an honour code and honour code committees.

An officer cadet in commissioning academies is referred to not just as a cadet but a ‘gentleman cadet’. To many, the prefix ‘gentleman’ seems out of place for a person trained to kill and given the license to do so by society. The only other person with this power is an executioner in jails. Of course, he is not referred to as a ‘gentleman executioner’. That is because his killing power is very limited and he does it alone. The killing power at the command of an army officer is enormous and he exercises it in a group. It is only because of the enormity of this power that it is necessary to sheath it under the silk scarf of honour. The sword is allowed to be used only by good men whose intentions are noble. Else, there will be mayhem.

Maintaining good order in army units is considered so important that there is a specific regulation (Army Act, Section 63) which provides for blanket coverage of various types of misdemeanours not covered elsewhere. For an officer, the restrictions on his general conduct are even tougher. Regulations for the army provides for punishing “an act unbecoming of an officer”, under which you can book an officer for practically anything. So it should be clear that the Indian army wishes its officers to be more than just proficient and disciplined. It wants them to be honourable and gentlemanly. Honour is so important to the Indian army that many an officer in my regiment have been punished for saying that ‘I belong to 4 Gorkha Rifles’ rather than the correct ‘I have the honour to belong to 4 Gorkha Rifles’.

And why this emphasis? Why is honour necessary in the army but not in the Indian Administrative Service or in the Indian Foreign Service, or for Indian Institute of Management graduates? According to Charles Moskos and Frank Wood in The Military: More Than Just a Job?, that’s the difference between occupations and institutions. An institution is legitimised in terms of values and norms – a purpose transcending individual self-interest in favour of a presumed higher good. An occupation, on the other hand, is legitimised in terms of the market place. Supply and demand, rather than normative considerations, are paramount. The occupational model implies the priority of self-interest rather than that of the employing organisation.

The need for a more stringent code

Why do I say that there are already many cracks in the ‘honour’ system of Indian army? To start with, the honour code committees in the IMA and the NDA have never been too successful. This is not so with the armies of the US and the UK.

In the late 1970s, two cadets at the US military academy at West Point were caught cheating in an examination. The US army sent the whole batch of a thousand cadets home because the honour code there was that “thou shall not lie, steal or cheat or tolerate others who do so”. The IMA, on the other hand, has attempted to adopt an honour code at least thrice since 1932, but unsuccessfully. In the NDA, the committee exists but does not have teeth. How can it, when just some years back the commandant of NDA had to be moved out post haste on allegations of collecting money from junior employees? We also know that an ex chief of the Indian air force is alleged to have been part of a corruption scandal concerning VIP helicopters. When such charges fly thick around officers of the rank of lieutenant general, while a serving chief taken his own government to court for personal matters, it has to be accepted that the concept of honour is already under attack from the top, not below.

In their seminal book Crisis in Command: Mismanagement in the army, Richard A. Gabriel and Paul L. Savage remind us that the moral failures of the officer corps have only partially been the result of the failure of the individual officer’s code of ethics. It has been the failure of the army as an organisation to develop an institutional sense of ethics that is supportive of individual notions of integrity and further, to ensure that individual officers  are trained in a sense of what the ethics of the military institution are. It is simply wrong to assume that a collection of individual officers with individually-derived codes of ethics will automatically produce an ethical code for the community as a whole. In fact, precisely the reverse is likely to obtain. A community sense of ethics can be used to socialise individual members of the community and it is this process which results in the ‘pride of belonging’ so necessary for the cohesion of such units. Gresham’s law  states that bad money drives out good money. Similarly, bad officers drive out good officers.

The failure to abandon the ethics of the entrepreneur and to develop a code of ethics consistent with the institutional nature of the army has left it with an officer corps without any formal organisational sense of guidelines. What is important about these moral qualities is that they acquire, in the military, a functional significance over purely moral ones.

The moral fabric of the Indian army is definitely under attack. If we allow officers to use fellow Indians as a shield to protect themselves from stones, the next stop will be Indian infantry using Pakistani women as shields when they storm the defences of Lahore next. And if we reward them for such acts, with an assurance from the defence minister that they have a free hand in combat zones, the army will lose its edge very rapidly. The time to act is now, unless it is already too late.

Colonel Alok Asthana is a retired officer of the Indian army. He raised one of the early Rashtriya Rifles battalions and commanded it in Manipur and then in Jammu and Kashmir.