The MHA wanted IPS officer Basant Rath disciplined for writing columns “dangerously critical of government policy” but the J&K government chose to promote him instead. 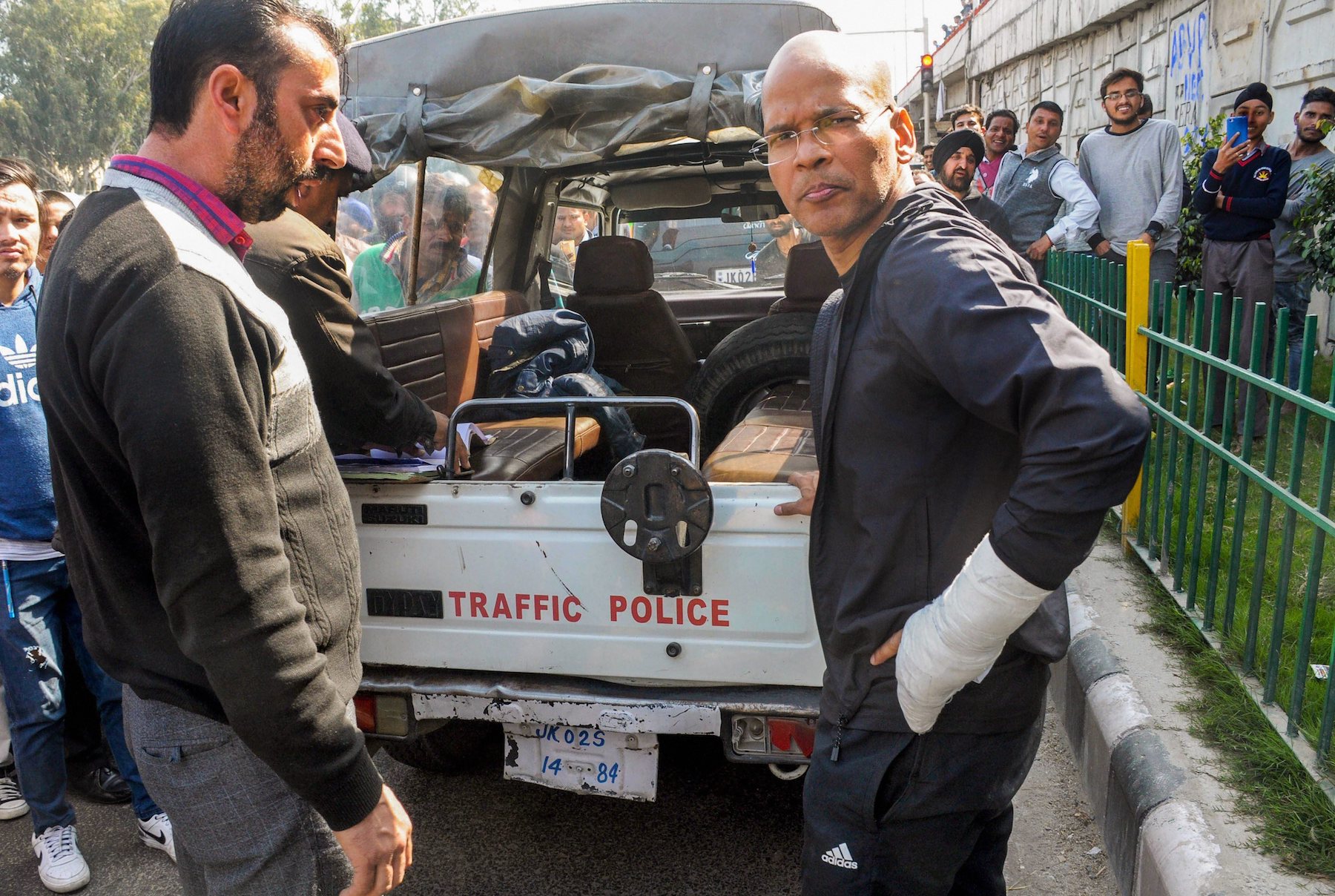 Inspector General of Police (Traffic) Basant Rath, right, during a traffic inspection in Jammu on Tuesday. Less than a fortnight into his new assignment, Rath has been trying to manage traffic in Jammu that is drawing applause and brickbats for his flamboyant work style, with some comparing him to the wildly popular protagonists in Bollywood movies like Singham and Dabangg. Credit: PTI .

New Delhi: At a time when non-state actors are attacking the freedom of expression of students, writers, artists and film-makers, a new front in the war on free speech has opened with the Union home ministry seeking disciplinary action against a senior police officer for his writings in the national media, especially The Wire and the Indian Express.

The officer under the Modi government’s scanner is Basant Kumar Rath of the Jammu and Kashmir cadre of the Indian Police Service. He was recently promoted to the rank of Inspector General by the Jammu and Kashmir government and put in charge of traffic. An upright officer, he is being called “Singham” – after the iconic no-nonsense Mollywood cop – for his tough approach to traffic violators.

The MHA, as per a report in The Quint, has accused Rath, a 2000 batch officer, of violating the All India Service Rules and has urged the Mehbooba Mufti government to take “action” against him. The home ministry had initially ordered a “discreet inquiry” by the Intelligence Bureau against Rath in 2016-17 as it had found some of his articles appearing in The Wire and the Indian Express to be supposedly in violation of the service rules.

Rath has written a total of 28 articles for The Wire since August 2016. His last two pieces were on the need for effective policing against Valentine’s Day vandals and on the need for police officers to have allegiance to the constitution rather than to a temple.

All his articles deal with broad policy issues as they relate to security and policing and carry a standard disclaimer at the end: “Views expressed are personal”. He has never written on issues he directly deals with, or indeed on the situation in Jammu and Kashmir, except one article on the death of six young policemen in J&K, where he urged that their sacrifice in the battle against terrorism evoke “respect and not chest-thumping by social media warriors”.

Despite his published record, the Intelligence Bureau, according to The Quint, has branded Rath’s writings “dangerously critical of government policy” and in “brazen violation of the IPS service conduct Rules”. Among the articles the IB found objectionable were:

The Intelligence Bureau is also learnt to have termed Rath’s articles as “seditious” and said they can have “serious consequences” over the morale and discipline of the police and security forces in Jammu and Kashmir. Following this ‘discreet inquiry’ from the IB and its detailed report about the officer’s alleged “objectionable conduct”, The Quint reported that the MHA in August 2017 asked the Jammu and Kashmir government to take “disciplinary action” against Rath.

The letter takes note of the “discreet inquiry carried out by the intelligence agency” on Rath’s conduct and goes on to add:

“As per the inquiry report, Shri Basant Kumar Rath has written 12 objectionable columns (10 columns in www.thewire.in and 2 columns in The Indian Express) during the current year. On perusal of the articles, it has been observed that Shri Basant Kumar Rath has failed to maintain absolute integrity and devotion to duty, interacted with media without making it all times clear that the views expressed therein are his personal and not that of Government’s, and adversely criticized the current/recent policies of the Government. He has violated the provisions of Rule 3(1), Rule 6 and Rule 7 of the All India Services (Conduct) Rules, 1968.”

“The Government of Jammu and Kashmir is therefore requested to take disciplinary action against Shri Basant Kumar Rath, IPS, in terms of All India Services (Discipline and Appeal) Rules, 1969 for violation of Rules 3(1), Rule 6 and Rule 7 of the AIS (Conduct) Rules, 1968. Action taken by the State Government may please be intimated to this Ministry at the earliest.”

The decision to leak the MHA’s August 2017 letter comes in the wake of the J&K government’s refusal to take disciplinary action against Rath – an officer who is highly regarded in the state – but to actually promote him.

While the Centre has invoked the All India Service Rules to justify action against Rath, retired police officers, advocates and serving administrative officers The Wire spoke to believe that Rath is on a firm footing as his writings have all been about how the policing and security mechanisms need to be improved,  are not critical of the state or the Central government, and steer clear of political partisanship.

As retired IPS officer Vibhuti Narain Rai, said: “If an officer is writing about how the politically connected mining mafia is responsible for Naxal violence you cannot fault him. However, if he is blaming the Centre or a state government or their policies then it becomes a different issue, but that is not the case here.”

Rai, who had exposed the killings of Muslims in the 1987 Hashimpura riots and had in the wake of the 2002 Gujarat pogrom issued an open letter to IPS officers whom he considered responsible for the failure of law and order, said there are several rulings of the Supreme Court which protect an officer’s right to have his say on such social issues in the public interest.

He further said that a serving officer can only be faulted for his conduct if his or her comments are critical of the present political establishment and are not only about social or cultural ills plaguing the society. “In that case, of course, even a disclaimer that the views of the officer are personal may not help.”

‘SC has come down heavily against officers for raising issues’

Senior Supreme Court advocate Kamini Jaiswal, however, said if past experience is anything to go by officers who have spoken out against perceived wrongs in the society have not got much relief from the higher judiciary. “Be it the case of Sanjiv Bhatt, R.B. Sreekumar or Pradeep Sharma, all of whom were from Gujarat, the Supreme Court has come down heavily against officers who have taken up issues and they have all suffered because of these rules.”

Noting that while in general the laws pertaining to freedom of expression should apply in such matters, as long as officers stay within the bounds of conduct prescribed by service rules there ought to be no issue.

A senior serving government officer, who has had frequent run-ins with both the Centre and state governments, however noted that “if Rath has been promoted then there is not much that the Centre can do”. 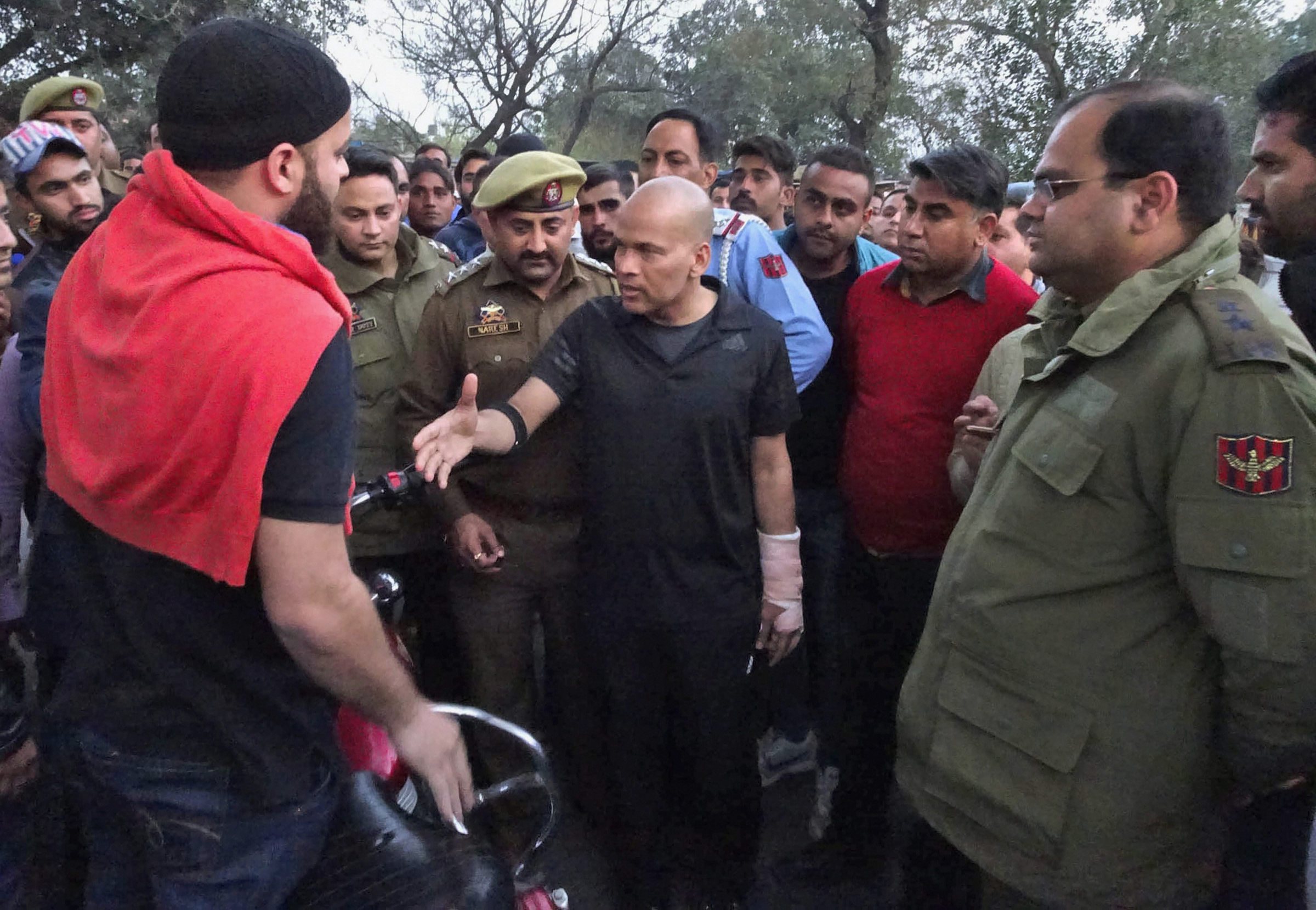 Noting that the Centre was not empowered to act against Rath directly, the officer however cautioned that often, as in his case too, he had learnt over the years that such a situation is like a “ticking time-bomb” since the Centre is very capable of mounting indirect pressure through politicians in the state to act against an officer. “In that scenario it comes down to how long the state functionaries can or want to withstand that pressure.”

‘No bar on writing as long as views are personal’

A closer look at the service rules, which the MHA note itself cites, makes it clear that as long as the official says the views are personal, there is no bar on his or her writing. Moreover, apart from the disclosure in all his pieces, Rath had neither attacked the government, batted for any party or written against “India’s relations with friendly countries”.

In fact, a look at his articles reveals Rath’s penchant for writing on issues that reflect on the challenges faced by the policing system in the country as  how and why it should be improved upon.

Some of his recent articles that clearly bear out this aspect include:

Each of these pieces were well-researched and tried to deliberate on a topic of public interest.

But what apparently appears to have riled the Centre even more are the pieces he wrote citing his alma mater, Jawaharlal Nehru University, and the way the academic atmosphere has been vitiated there over the past couple of years.

Apart from the one cited in the IB report, his articles in The Wire include another on JNU – ‘A University Is Not a War Museum’ – in which he questioned the proposal to place an Army tank in the university. Rath had in 2016 also written about the leadership crisis in the police in Biryani Policing and the Leadership Crisis in the Indian Police Service where he argued that IPS officers such as himself are under an obligation to act like leaders, and not as mere passengers.

Rule 6 pertains to “Connection with press or radio” and states:

“Previous sanction of the Government shall not be required when the member of the service, in the bonafide discharge of his duties or otherwise, publishes a book or contributes to or participates in a public media.

Provided that he shall observe the provisions of rules and at all times make it clear that the views expressed, are of his own and not those of the Government.”

Similarly, Rule 7 is about “Criticism of Government”

“No member of the Service shall, in any radio broadcast 16or communication over any public media or in any document published anonymously, pseudonymously or in his own name or in the name of any other person

or in any communication to the press or in any public utterance, make any statement of fact or opinion,—

i. Which has the effect of an adverse criticism of any current or recent policy or action of the Central Government or a State Government; or

ii. which is capable of embarrassing the relations between the Central Government and any State Government; or

iii. which is capable of embarrassing the relations between the Central Government and the Government of any Foreign State:

Provided that nothing in this rule shall apply to any statement made or views expressed by a member of the Service in his official capacity and in the due performance of the duties assigned to him.”