File notings accessed by The Wire show that the government was even prepared to amend the Citizenship Act in order to ensure compliance, a plan that was dropped when officials said they already had the power. 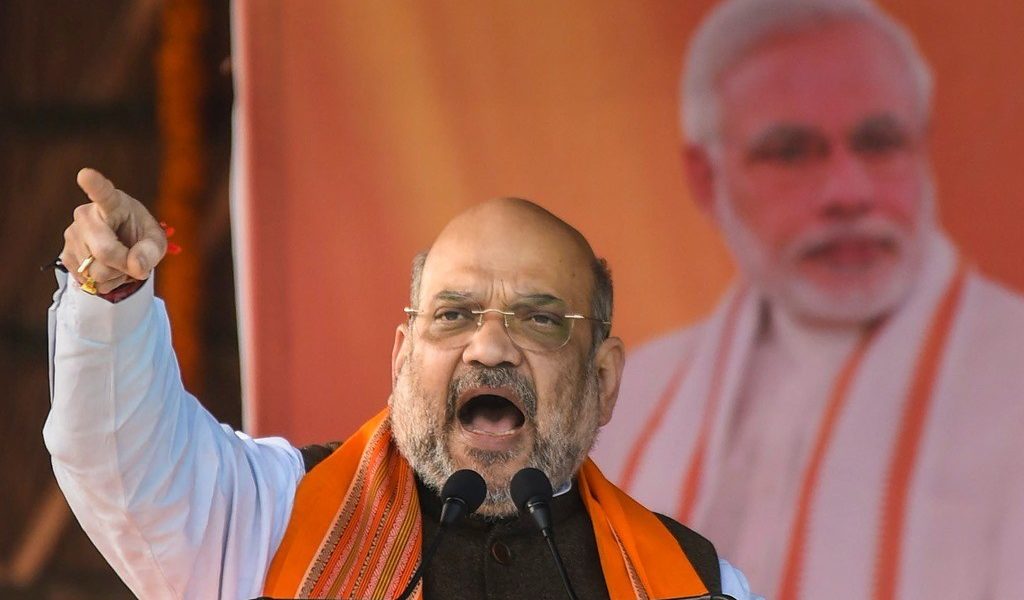 New Delhi: Amidst the ongoing controversy over the collection of Aadhaar numbers during the process of updating the National Population Register (NPR), the Union home ministry on Thursday insisted the  government would not force people to submit their Aadhaar credentials to official enumerators.

However, official documents show that the ministry wanted mandatory collection of Aadhaar numbers to be an essential part of the NPR exercise. Official ministry files, copies of which are with The Wire, show that the Centre was so insistent on mandatory collection that it was even prepared to amend the Citizenship Act if needed in order to be able to legally ensure compliance from residents.

In the event, overruling the advice of the Ministry of Electronics and Information Technology, the MHA asserted that the government was already empowered to mandatorily collect Aadhaar details.

On July 19, 2019, the office of the Registrar General of India (ORGI) under the Union home ministry – the nodal government department for implementing the NPR –  wrote to the Ministry of Electronics and Information Technology (MeitY) seeking permission to collect Aadhaar numbers during the forthcoming NPR updating exercise. The reason the ORGI sought a go-ahead from MeitY was because it felt the Supreme Court ruling on Aadhaar and privacy, and the passage of the Aadhar and Other Laws (Amendment) Act, 2019, had created some ambiguity.

The ORGI marked its letter to the secretary, MeitY and the Unique Identification Authority of India (UIDAI), which authorises Aadhaar. The matter was followed up at a meeting led by S.Gopalakrishnan, joint secretary, MeitY, on August 6, 2019.

According to the minutes of this meeting, a copy of which is with The Wire, it was decided that the ORGI could collect Aadhaar numbers during the “NPR updation” without violating the conditions stipulated in “Clause 5” of the Aadhaar regulations, 2016. 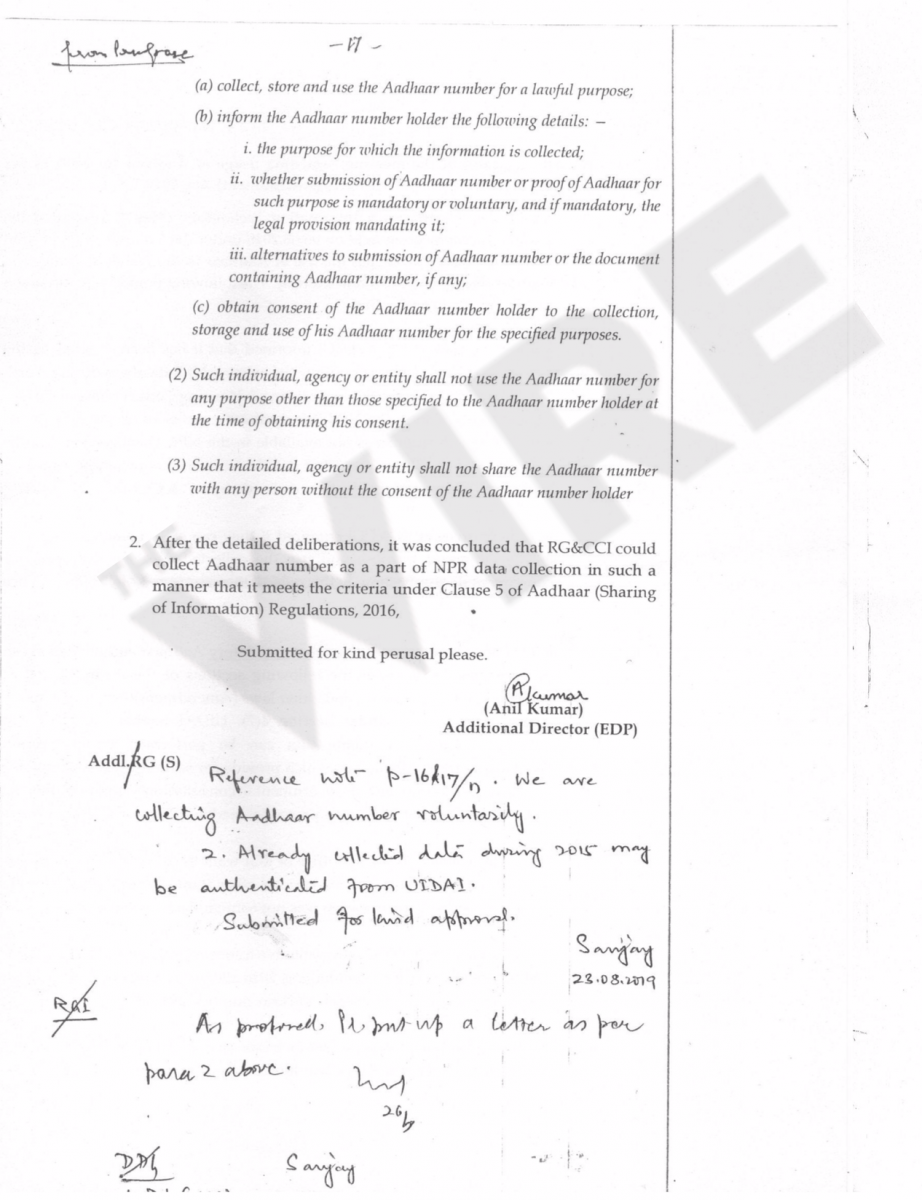 The clause also says that the agency can use the Aadhaar numbers only for the purposes it has sought consent for. The ORGI was given permission to collect Aadhaar numbers under these conditions.

In response, additional registrar general Sanjay wrote on August 23, 2019 that the ORGI was only collecting Aadhaar as an alternative and to certify those numbers which have already been collected during the 2015 NPR updating exercise.

Within two months, however, the ORGI changed its stance later, arguing that MeitY’s conditions under Clause 5 were not applicable to it since it is a government organisation.

Speaking about the MeitY-imposed conditions, the ORGI wrote on October 12, 2019, “From this [i.e. Clause 5], it appears that ORGI could collect Aadhaar number as part of the NPR on Voluntary basis only. However, the above advice does not seem to be applicable to ORGI, which is a Government Organisation.”

The government from here on decided that the ORGI had the authority to collect Aadhaar numbers mandatorily during the NPR updating exercise to be carried out in 2020, official documents reveal.

The file noting dated October 12, 2019 signed by registrar general Vivek Joshi reads thus: “Provision under 14A(5) of the Citizenship Act, 1955 it is stated that ‘The procedure to be followed in compulsory registration of the citizens of India shall be such as may be prescribed.’ And, therefore, for the purpose of preparation of population register under rule 3(4) of the Citizenship Rules, 2003, we may make collection of Aadhar number mandatory while updating NPR.”

The ORGI also proposed that if current rules do not permit making the collection of Aadhaar numbers mandatory then the Aadhaar Act and Citizenship Act should be amended.

“If otherwise, for the collection of Aadhaar number for NPR updation and also for Civil Registration System (CRS) Scheme for registration of births and deaths of the ORGI may be made mandatory by making suitable amendments in the Aadhaar Act or Citizenship Act,” reads the file noting. A high-level meeting under the Union home secretary was held on October 18, 2019 in which the collection of Aadhaar details was discussed. Others present at the meeting included the CEO of UIDAI, MeitY secretary, secretary of the department of legal affairs under the Union law ministry, and representatives of the ORGI. There is no information about what the outcome of the meeting was. While the paper trail leading up to the meeting had built a case for the mandatory collection of Aadhaar details, anonymous MHA sources have been quoted in the media claiming that NPR, 2020 will collect Aadhaar numbers only on a ‘voluntary’ basis.

Curiously, one official gave the Times of India a definition of ‘voluntary’ that resembles the word ‘mandatory’: “A senior official explained “voluntary” or “optional” sharing of identification documents only meant respondents would not be required to provide details of Aadhaar, driving licence, voter ID or passport number if these have not been issued to them in the first place.” This means providing Aadhaar details would essentially be mandatory for the 1.2 billion residents who have an Aadhaar card.

The Wire had earlier reported that 60 crore Aadhaar numbers – almost half of the total Aadhar data –  have already been seeded with the NPR database even before the 2020 updating exercise started.

The NPR was initiated in 2010 by the United Progressive Alliance government under then Prime Minister Manmohan Singh. A pilot project on NPR started two years earlier, when Shivraj Patil (May 22, 2004 – November 31, 2008) and P. Chidambaram (November 30, 2008 – July 31, 2012) were Union home ministers. Chidambaram has since said that the NPR exercise under the UPA is quite different from and the avatar it has now taken – with attempts to also question respondents about their parents’ place of birth etc.