Fire in Gurgaon, Private Services to the Rescue – but for Whom?

It has, in recent years, instead increased its reliance on on the private sector – Honda Motors and Maruti Suzuki, among other large industrial fire fighting fleets – to help attend to civil fires.

While official data is hard to come by, the state’s rich district, whose infrastructure remains underfunded and underdeveloped, has been plagued by several major fires recently.

This week, 60 shanties burned down in Bajghera slums in Sector 112; a fire on March 5 left 350 homeless in Nathupur village in DLF Phase 3 situated at a 2 km distance from Gurugram’s Cyber City; another fire in the same area in January killed a seven-month old baby and destroyed another 100 homes.

Last year, a major fire in a slum cluster in Sector 49 destroyed 150 homes. An uninsured poor family losing their home may mean a total annihilation of possessions, savings, and possibly, means of livelihood.

Just two days ago, on May 16, a godown belonging to a cleaning and housekeeping materials firm, MR International was damaged by accidental fire caused by an electrical short circuit in its basement store full of flammable industrial chemicals.

As do other private ‘partners’, which include India’s automobile majors, the area’s oldest and largest employers, in what additional commissioner at Municipal Corporation Gurgaon (MCG) Y.S. Gupta, calls ‘mutual aid’ – a voluntary reciprocal local arrangement between the private and public sectors.

“Providing fire facilities in one another’s areas in emergencies: this is a local arrangement made between big institutions who have their own fire arrangements like DLF, Maruti Suzuki and the Indian Air Force Station (which maintains an estate in Gurgaon district 18 km away),” he explains.

The 2009 Haryana Fire Services Act allows calling on additional fleets as a stop-gap arrangement in cases of very serious fire emergencies, only.

It also directs aggrieved property owners or their insurance companies to pay for such contiguous, one-off expenses incurred by employing fleets which are called beyond their prescribed areas. The act says:

Where members of the service are sent beyond (state-set limits) in order to extinguish a fire, the owner or occupier where the fire has occurred or spread shall be liable to pay such fees.

But such extra-statutory rescues have been allowed to become the norm as government investment in fire services remains low.

Gupta refused to confirm if property owners pay private fire fighting teams, whether these were off-balance sheet transactions, or if companies worked free of charge.

Fire services are considered basic infrastructure so that those unable to pay – the poorest were not ignored – this is the spirit in which the state rules were enacted, and an international civic standard.

Though public and private firefighting firms are known to co-exist in many countries, the private sector must not cover for the government’s shortcomings and haphazard planning.

The private companies helping out in fire operations did not wish to respond to The Wire’s questions. 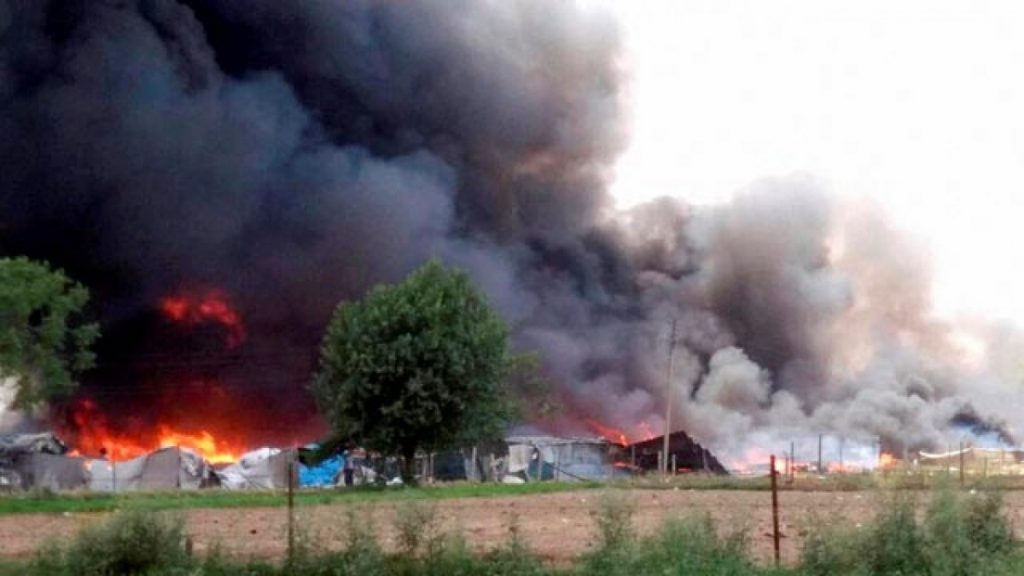 Hundreds of shanties were burnt recently in Gurugram. Credit: PTI

If mutual aid implies barter, Haryana fire service is seriously underequipped though Gurgaon renamed Gurugram has seen its per capita income and population rise as it contributed billions in revenue in taxes and license fees to the local, state and central government treasuries.

Data obtained by The Wire from the additional commissioner named six fire stations that serve this crucial Haryana district: sectors 29 and 37; Bhim Nagar; Udyog Vihar; IMT Manesar; and Pataudi, a town 28 km from Gurugram. These stations are between 7 and 57 minutes’ distances in ideal traffic conditions, from Cyber City, and the surrounding areas where the maximum numbers live or work.

Experts believe the first 20 minutes after a fire starts are the most crucial.

Rapid response to a fire contingency necessitates an easy to reach emergency central control room phone line but in Gurgaon, a station must be contacted directly as no single 101-type number exists, causing crucial delays.

Also Read: From Fire Safety to Urban Planning, Indian Regulations Are Not Working

“If it takes too long to reach a site, a fire fighting team may as well not go. Besides one has to take into consideration the frequent traffic snarls on the roads of Gurgaon when long distances must be covered,” said the ex-city planner quoted above.

By this calculation, only the Udyog Vihar and Sector 29 stations are optimally spaced from the urban heft – of under ten minutes, an international standard.

Bhim Nagar at a distance of 10.5 km is approximately 22 minutes away from Cyber City, while the IMT Manesar station is 27.5 km, or a half hour drive, and the sector 37 fire station, which is 50 minutes away — are all too far away. A fire brigade from Pataudi may in theory be situated within Gurgaon district limits but could take up to an hour to arrive.

But last year a fire that started in a staircase – the only exit – on the fifth floor of a high rise killed a woman when the rescue took 45 minutes to arrive at Tulip Apartments in Gurugram’s Sector 29 which does have a government fire station.

Meanwhile, private websites are flooded with firemen jobs as companies beef up their fire fighting manpower.

A retired fireman who worked in the service since he was a young man said there are hardly any new jobs in the government sector, traditionally seen as the more secure employer. He did not want to be named as a close member of his family still works for the Haryana fire service.

In manpower, Gupta said, there is a total of “178 fire personnel working at all fire stations.”

The approximate daily pay rate for a fireman is Rs 700 while for a full time government worker, paid monthly, is Rs 16,000. The DC wages are paid from departmental contingency funds.

According to the national framework, the state must provide fire officers proper dormitories in fire stations as they work in two or three daily shifts – but this requisite also remains unmet.

“Much of the development is only paper plans. Urban infrastructure matters are handed over to the private sector and then the government officers in-charge keep being transferred to new postings,” an ex-Delhi Development Authority planner said on condition of anonymity.

The law says expenditure on the fire service be met by the state. Policy also outlines that fire facilities be beefed up with population increases but Gurgaon’s last civil fire station (in Udyog Vihar) was built in 2012, and further investment in upgrading the services has lagged since.

In fact, the recently published Gurgaon-Manesar Masterplan 2031, a blueprint set out for the expansion and development of Haryana’s satellite towns does not have land allotted for any fire stations and sub-stations.

The Haryana Development and Regulation of Urban Areas Act, 1975 regulates land use in order to prevent ill-planned and haphazard urbanisation laying down a mechanism to grant licences to set up a new neighbourhood which must have land set out for infrastructure–specifying a fire station–as well as schools, colleges and open spaces, etc, as essential.

In a rare instance of civic justice, in 2015 the Punjab and Haryana high court held the Haryana government liable of ‘generating revenue by selling colony licences to builders who are not even providing basic amenities to residents’ and said it may not issue occupation certificates in Gurgaon sectors 68 to 80. 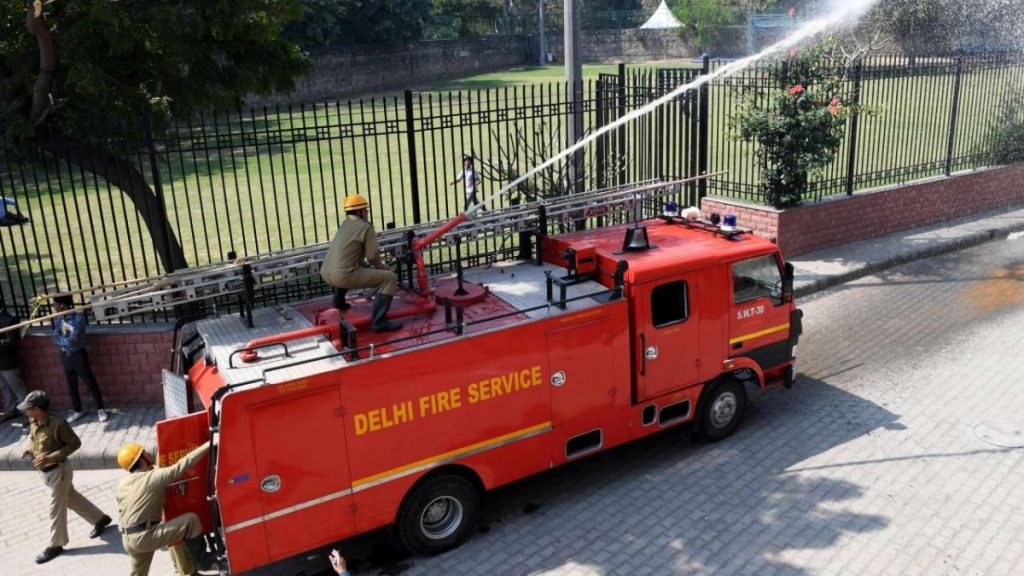 No data on fire accidents, arson

Haryana state has stopped publishing official consolidated data on urban fires altogether. Authorities have consistently denied any loss of life, and been vague about injuries, or compensations paid to the aggrieved.

Fire brigades must mandatorily submit a full narrative of big and small rescue operations – from the first emergency call onwards – to their fire station officers for public record.

But repeated requests for information about the fire-preparedness of the economically burgeoning district from the additional director of fire services (Haryana) I.S. Kashyap, and MP Kavita Jain, were ignored.

According to the Gurgaon municipal authority’s 2017-18 account statement ‘fire event charges’ clocked at Rs 10,12,400. There are no such explicitly stated user charges in the account statements for 2015-16, nor 2018-19 on the Municipal Corporation of Gurgaon (MCG) website.

Private companies Honda and Maruti Suzuki refused to say whether they were submitting such reports to the concerned authorities after conducting civil rescues.

Last month the Hindustan Times reported, MCG had not allocated any money for ladders for fire and rescue operations in high rises in its budget for FY 2018-19. Ladders coming up short in fire brigades can cost lives as they did in the Grenfell Towers tragedy in London, UK.

In 2017, The Hindu reported how the fire-fighting department has often borrowed bigger hydraulic platforms from DLF and Maruti in the past.

The Gurugram local body recently moved a policy suggestion that all high rise buildings attach cantilevered staircases externally to the height that fire tenders can reach. Officials are yet to consider whether this is feasible.

With the basics still not in place, government is saying it shall build full-service fire stations that will handle all emergencies including natural, or medical emergencies, etc, with responsibilities handed to the National Disaster Response Force chaired by the Prime Minister, the BJP announced last month.

In comparison, Canada and Brazil firms may hire fire fighting units from a well-developed private market. Germany, running an ideal public fire rescue operation, has 24,000 local fire brigades and thousands of volunteer firefighters who are as well trained as career firefighters.

“Governments running a strong, well-equipped service of private, public or volunteer firemen — all equally well-trained — is a given. The mindset for running a good fire safety service ought to be that there is never enough machinery and manpower for emergencies where losses of lives and property can occur,” the ex-DDA planner said.