An estimated 35 lakh Adivasis in Gujarat seasonally migrate to cities for work but the grand electoral promises of BJP and Congress fail to acknowledge their issues. 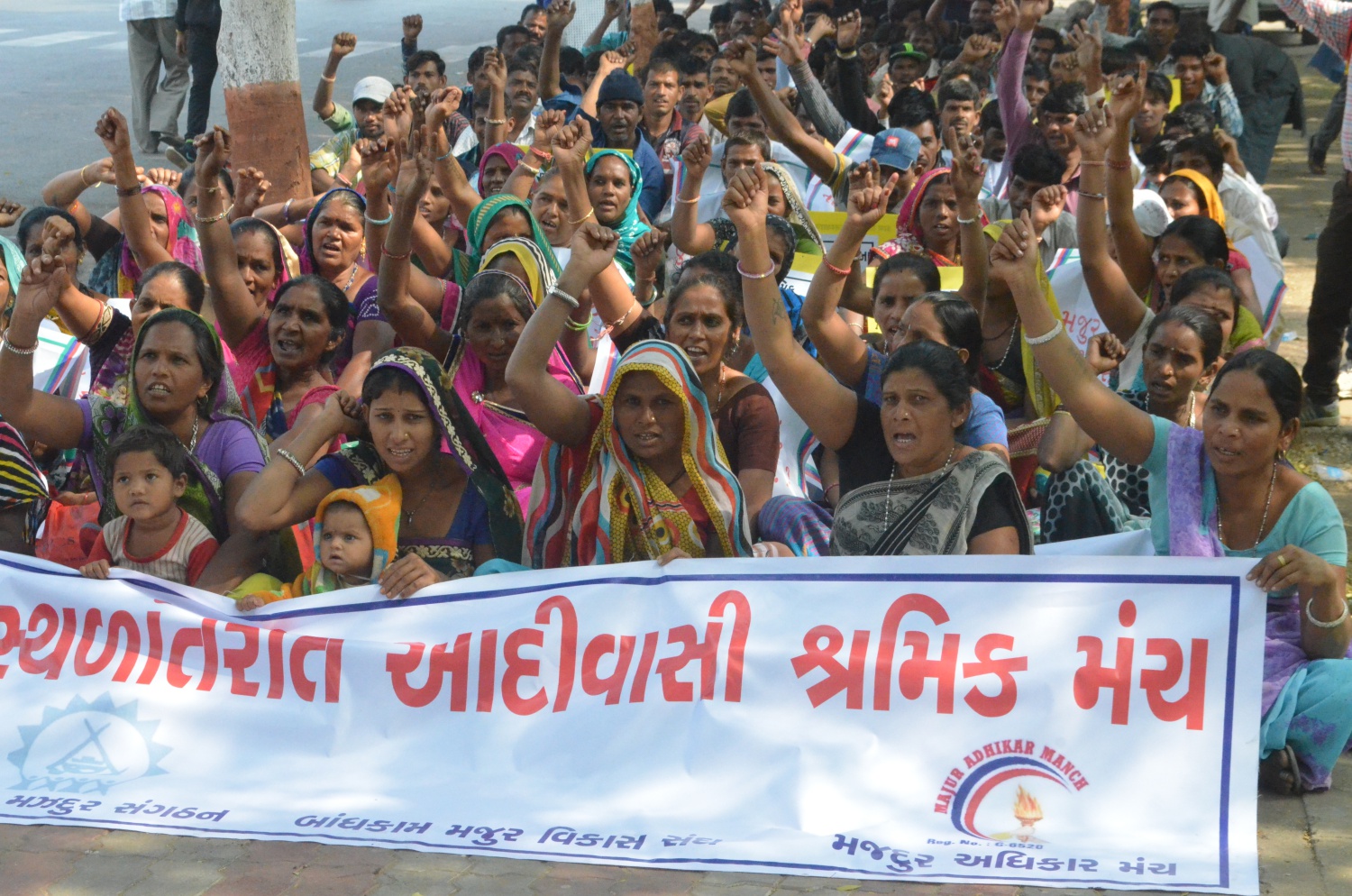 Sharma Bhuriya seems disillusioned with the recently released party manifestos ahead of the Gujarat elections. “There is nothing in it for people like me. I have been living on pavements in Ahmedabad for more than 20 years now and have been thrown around like garbage from one pavement to another in constant evictions by the Ahmedabad Municipal Corporation,” said the 33-year-old Adivasi migrant who hails from Dahod district of the state.

She lives on the over-crowded pavement outside Asarva railway station, where around 40 adivasi migrant families, employed as construction workers in the city, live. “It is extremely difficult as I have to wake up as early as 4 am in the morning, so that I can safely bathe out in the open,” said Bhuriya. The Adivasi women migrants lack access to basic sanitation facilities in their settlements. “I walk more than a kilometre to access the pay and use Sulabh toilet and spend Rs 20 just to use toilets on a daily basis.”

This is not the case of Bhuriya and her family alone. Thousands of Adivasi families seasonally migrate from their villages to seek employment in agricultural farms, factories and construction sites across Gujarat. According to the informal estimates of Sthalantarit Adivasi Shramik Manch (SASM) – a state-wide coalition of trade unions of Adivasi migrant workers – there are around 35 lakh Adivasis in Gujarat who seasonally migrate for work.

Despite this, both the Bharatiya Janata Party (BJP) and the Congress have displayed complete ignorance in appreciating and addressing the issues of Adivasi migrants in their recently released manifestos in the run up to the Gujarat elections. 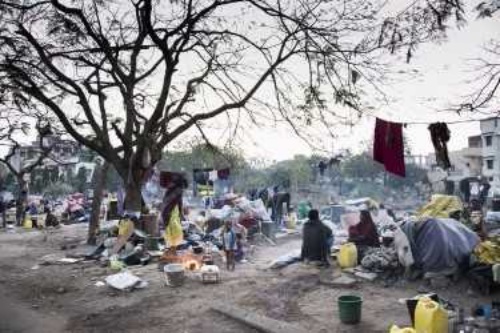 “Even after significantly contributing to urban growth by providing cheap labour at factories and construction sites, Adivasi migrants are absent in the urban development imaginations of both the BJP and Congress,” said Mahesh Gajera, a convenor of SASM. The much-hyped housing schemes in the BJP and Congress manifestos, called Mukhya Mantri GRUH Yojana and Rajiv Gandhi Awas Yojana respectively, are about in-situ rehabilitation of slums in urban areas.

This is appalling beccause Adivasi migrants as a population don’t even have access to notified slums and they remain in the fringes of the city occupying open spaces under flyovers, beside railway tracks, on pavements and empty private/public plots.

Bhuriya says, “The political parties don’t understand the fact that we spend six to eight months in a year in cities working hard to make ends meet. All their promises are village-centred, as if we don’t exist in cities. We also miss out on the government’s welfare schemes in the villages, as we are constantly on the move.”

While the BJP manifesto highlights Vanbandu Kalyan Yojana as the panacea for tribal development in villages, the Congress manifesto stresses on better implementation of the Forest Rights Act and development of Smart Villages to stop migration as the roadmap to improving the welfare of Adivasis.

The visions of the Vanbandu Kalyan Yojana and Smart Villages do talk about livelihood generation among tribal youth through the promotion of agricultural diversification and natural resource management in villages. But they turn a blind eye to their livelihood security at places where they are denied minimum wages and forced to work for longer hours in hazardous work environments in factories and construction sites.

While these schemes lay emphasis on state-funded health, education and housing for Adivasis in their villages, they fail to cater to their education, health, safe drinking water and housing facilities at the destinations. 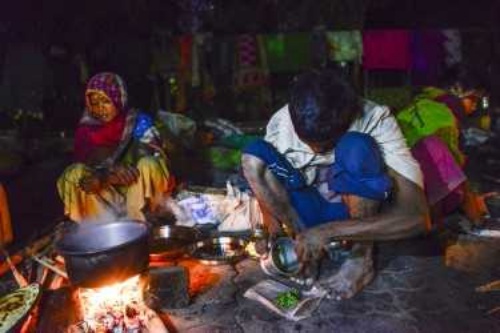 Adivasi migrant families cooking on the pavements where they live. Credit: Tathya Macwan

Engaged in the unorganised sector, Adivasi migrants dominate low-paying, low-end and hazardous jobs in the state. Their names never appear on the registers of the employers. Issues such as non-payment of wages, manipulation of wage rates and denial of accident compensation take place with alarming regularity among this community.

“My younger brother who worked as a helper at a construction site had a severe head injury a year back. The contractor promised us compensation and we were asked to seek medical help in the village. Once he was taken to the village, the contractor just disappeared from the scene. We strived hard and filed a case at the labour court, but even after a year’s persistence, the contractor constantly turned down the court notices,” said Bhuriya.

Both the BJP and Congress manifestos miss the mark in equipping the labour courts and setting up separate legal redressal cells to promote legal safety and security of these informal sector workers. In this disappointing vacuum of legal support systems, the promise in their manifestos for providing insurance and social security cards for informal sector workers might not go very far in ensuring worker welfare.

Although farm loan waivers and implementation of the Minimum Wages Act are highlighted by Congress in their manifesto, it remains to be seen how far these initiatives can make a positive change in the lives of Adivasi migrant families employed in cotton, sugarcane and groundnut farms across Gujarat. Adivasi migrants who work as either sharecroppers or casual labourers are deprived of access to formal credit and are engaged in exploitative verbal work agreements – prone to cheating and bondage – with employers.

The Gujarat State Election Commission has responded positively to some of the demands of SASM by setting up migrant voter cells in tribal-dominant districts and by initiating a dedicated outreach campaign to ensure greater voting among Adivasi migrants. But the grand electoral promises of “Gujarati Asmita” and “Khushal Gujarat” fail to acknowledge the existence of migration for work as a lived reality for Adivasis, nor have their policies attempted to make migration safe and secure so that Adivasi migrants can benefit from it.