Activists and families who live in the ashram believe that the changes may leave them homeless and also alter the ashram's ethos. 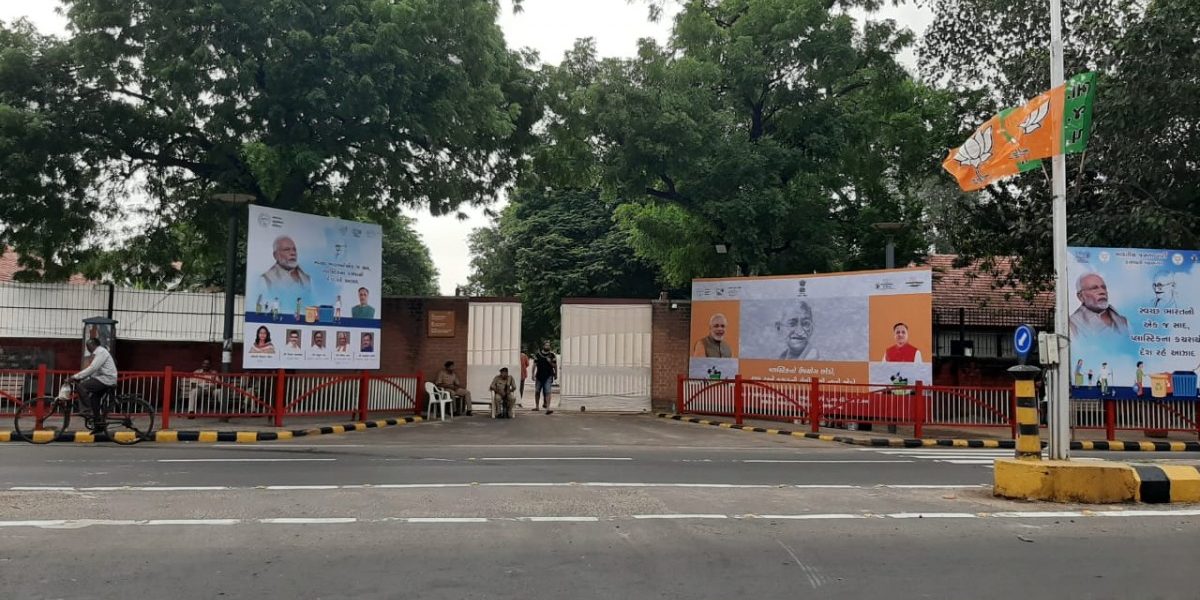 Ahmedabad: Resentment and fear is brewing among residents of the Sabarmati Gandhi Ashram in Ahmedabad because of plans to ‘develop’ the premises, which could change the very nature of the place where Mahatma Gandhi spent 12 years of his life. The ashram, which was started by Gandhi in 1917, is home to over 200 families. They worry that they will be left without a place to live and are protesting against any changes.

The government has ‘world-class’ dreams for the serene ashram, which is visited by tens of thousands of people every year. They come to see the simple way in which Gandhi lived, and the open museum showcasing the Mahatma’s life designed by Charles Correa.

Though the details are fuzzy, the redevelopment will involve creating a 32-acre complex and will be handled by various government agencies of the Centre and state, as well as the tourist department of Gujarat and the Ahmedabad Municipal Corporation.

Mamta Verma, tourism secretary of the Gujarat Tourism Department, said the project will be conducted by the department, though she has no idea of what it will entail or the costs involved. According to sources, the project is likely to be concluded by October 2, 2020.

The idea for this project appears to originated from the prime minister, and on October 2 this year, as Gandhi’s birth anniversary was being celebrated, posters welcoming Narendra Modi with a few slogans about cleanliness could be seen.

This has set off speculation not just among residents of the ashram but also activists, who fear that the essential character of the place will be lost and those living there will be rendered homeless.

On October 7, 2019, hundreds of residents of the Harijan Ashram held a protest march against the proposed development. The Harijan Ashram is home to around 2,500 people whose forefathers were brought here from different parts of the country by Gandhi between 1917 and 1930.

A map of the proposed redevelopment.

Shailesh Rathod, one of the residents, said, “We are not going anywhere and will stay here. We’ve come to know about the eviction plan. I would like to remind the government that when Gandhiji was here, our families were here too.”

Rathod’s grandfather was one of those asked to come to the ashram in 1930, and his descendants have been living there ever since. “We also got to know that in the name of residents, a messages is being circulated that around 70% of us are ready to move out. But we are not – all 200 stakeholders have signed an affidavit.”

He worries that the essence of the ashram will be lost, and that there could be some ‘distortion’ in the historical narrative put forth at the museum.

Another resident, Dhimant Badhiya, echoed these fears. “We have no idea about the plan. We, our families, have been staying here ever since the establishment of the ashram. We still weave khadi and spin the charkha by hand. We are following what Gandhi preached and now all of a sudden, the government is asking us to relocate to a bigger and more spacious space. They won’t tell us what they want to do with this place.”

According to another resident, “There is a tradition, unwritten but followed by each and every chief minister and governor of Gujarat, that when they are appointed, their first official visit is the Gandhi Ashram. However, when Narendra Modi became the chief minister, he did not follow the tradition – and nor have his two successors.”

Kartikey Sarabhai, one of the trustees of the Sabarmati Ashram Preservation and Memorial Trust, says that the plan is to “return this place to its original shape. Though the government will be involved, we will not allow ‘Sarkarikaran’ of the Ashram. There will be no compromise on the ethos of the place.”

He said that the prime minister has expressed the desire to make the ashram look like what it was when Gandhi lived here. “The idea is to make this place a bigger and better space, and to make it one precinct with 61 buildings, which are intact since 1930,” said Sarabhai.

“The trust itself is a preservation trust, we have been working on preservation and it must be maintained like that. There should not be any other development to it. We need to recreate the environment of Gandhi’s simplicity and aesthetic. But there won’t be any changes in the existing structure,” says another trustee, Sudarshan Iyenger. A poster of Prime Minister Narendra Modi with US President Donald Trump on display outside the ashram on October 2, 2019. Photo: Gargi Raval

The preservation trust is looking after the key buildings in the ashram premises, which are the main attractions for visitors. In 1963, the Gandhi memorial museum was designed by Charles Correa and constructed in the same precinct. The area also houses Hriday Kunj, Magan Nivas, Meera Kutir, Vinoba Bhave Kutir and other similar cottages.

Sarabhai said that the original buildings will be kept as it and there will not be any changes. But, he said, some additional facilities will come up, including a parking space. “At present only 10% of the whole ashram is being visited. Now, the plan is to make the place as it was when the settlement started, and the entire project will be made on 32 acres.”

The other parts of the ashram were either sold off, given away or lay unusued over the years. There are five different trusts managing the broken away parts. The trustees of the ashram emphasise that the new plan will incorporate all of the other areas and expand the space to its original size.

Sarabhai says that since 2009, three different plans were developed – B.V. Doshi, Yatindra Oza and CEPT University worked on integrating the parts. According to sources, Bimal Patel, an architect who worked on the Sabarmati Riverfront in another part of Ahmedabad, is going to work on the ‘redevelopment’.

According to Sarabhai, restoration will take place in the larger part of the ashram and there will be dialogue with different trusts who are not involved in the ashram’s activities to move to a different site. “The master plan is yet to be evolved and the government will be facilitator of the entire project. Cost of the project is not yet known.”

Dilip Patel, a local journalist and a follower of Gandhi, rejects Sarabhai’s contention that no changes will be made. “I have seen so many changes in Hriday Kunj itself. They had earlier demolished Meera Kutir and then they rebuilt it after protests. The ashram has gone through an overhaul, with many infrastructural changes like the roof of Hriday Kunj and addition to the museum. Many changes have been brought in, including air-conditioned toilets. There is an eyewash by the trustees.”

The ashram is not a part of Ahmedabad classified as a UNESCO heritage site. When the heritage dossier for Ahmedabad was prepared, this site was excluded. However, when Ahmedabad’s induction as a heritage city was announced, countries who supported the Ahmedabad Municipal Corporation’s claim honoured the city by referring to it as the land of Mahatma Gandhi.

The protesters are not convinced by the government’s plans. Their fear is not just homelessness, but also an entirely new ideology being imposed. “There is ambiguity about the project. I have come to know about it via media reports,” said Mudita Vidrohi, an activist.

“Why not let the ashram remain as is; why does it need a change all of a sudden? It is a place of pilgrimage, though it has been now turned into a tourist attraction. The emphasis on making the place ‘world class’ is completely paradoxical to what Gandhi believed in. We know what Mahatma Mandir in Gandhinagar and the Statue of Unity have turned out to be in order to make them ‘world class’. Gandhi and his ashram do not need help to become world class. The Gandhi Ashram doesn’t have to become another picnic point or place where the government can hold its programmes,” added Vidrohi.

Rohit Prajapati, an activist, said that the redevelopment is a completely vague idea as of now, and no concrete plan is being shared anywhere. “The first thing is that by expansion, they mean commercialising the place. Basically, removing the ideology of Gandhi from the ashram. They are talking about redevelopment, but the government need to spell out in detail what it wants.”

Another activist, on the condition of anonymity, said the changes are not tolerable. “The party he [Narendra Modi] belongs to has an ideology that is the polar opposite of what Gandhi’s ideology is. During his tenure as chief minister and prime miniter, not a single Gandhian idea or institution has been put in place. What they believe in is conventional development, based on the Western model.”

Gargi Raval is an independent journalist based in Ahmedabad.