Is the Government Planning to Dismantle the ICDS Programme?

ICDS plays a vital role in a country which is home to 190 million undernourished people – the highest in the world. 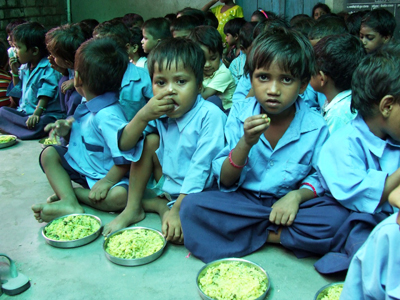 The ICDS is a unique outreach programme to meet the nutritional needs of ten crore Indian children under the age of six and to improve the nutrition levels of pregnant and lactating mothers from the most vulnerable sections of our society. This massive program receives Rs 16,000 crore from the central government annually while state governments spend another Rs 16,000 crore annually.

The fulcrum of the programme is the 14 lakh anganwadi workers who implement a slew of schemes pertaining to healthcare, sanitation, livelihood and women empowerment at the village level.

The Ministry of Women & Child Development, headed by Maneka Gandhi, is quietly planning pilot projects to replace the hot cooked meals and panjiri given under ICDS with direct cash transfers.

ICDS plays a vital role in a country which is home to 190 million undernourished people – the highest in the world. It also has 48 million stunted kids due to malnutrition, from which 31 million are part of the workforce.

Till 2006, ICDS was reaching only one-third of the country but given the alarming statistics of malnourishment, the Supreme Court had ordered that it be universalised.

Sejal Dand, working on the Right to Food Campaign (RTFC) in Gujarat says, “The Supreme Court directive was very clear. Kids under three were to be given a panjiri while those between three to six years of age were to be given a hot cooked meal preferably using local foods to be cooked by local community women.”

“This is the current practice. The financial allocation for pregnant and lactating mothers is Rs 7 per day while the financial allocation for every child is Rs 6 per day. The reason why ICDS can provide meals at these rates is because the Food Corporation of India gives them grain at subsidised rates. The ICDS buys eggs at Rs 4 per egg while the market price is Rs 8 per egg,” said Dand.

“The National Food Security Act (NFSA) 2013 has clearly defined the calorie and protein norms for kids and mothers. Supplementary nutrition is a legal right for the vulnerable sections of the population.”

In the past, there have been attempts by the corporate sector to enter the ICDS programme by substituting packed ready made food for freshly cooked meals.  This is contrary to the spirit of the programme as well as the Supreme Court’s directives which prioritise decentralised, locally produced food made by women’s groups, thus providing both fresh food to children and employment to women.

The strange thing is that the current government, instead of strengthening this poverty and health ameliorating programme, seems to be trying to derail it. Maneka Gandhi seems to be toeing the line laid down by the mandarins of the NITI Aayog who have been pressing for cash transfers.

Cash transfers into bank accounts have not worked successfully either in the MGNREGA or in the Public Distribution System (PDS). The key question is will they be effective in combating malnutrition and rampant anaemia affecting lakhs of pregnant and lactating mothers?

Let us look at how cash transfers operate under MGNREGA. Economists Rajendran Narayanan, Sakina Dhorajiwala and Rajesh Gelani have analysed MGNREGA cash transfers in financial year 2016-17 from a random sample of 3446 panchayats across ten states and found that a large number of wage payments were delayed well beyond the stipulated 15-day period. There is a provision of compensation for delayed payment under the scheme. The economists calculated that the total compensation payable was Rs 36 crore but the new transaction based management information system calculated the amount at only Rs 15.6 crore.

Economist Dipa Sinha, who supports the RTFC says, “So far, Direct Cash Transfers (DCT) in the PDS have not proved very successful.”

When the NDA government came to power in 2014, they mooted DCTs for all the states but the state governments declined to accept it. It was decided to launch the DCTs in Chandigarh and Puducherry in September 2015 and in Dadra and Nagar Haveli in March 2016. Since then, the central government has been transferring money into the bank accounts of beneficiaries instead of providing them with food grains through ration shops.

“The DCTs were met with resistance in Puducherry where protests erupted against them. Now the people there are getting both the cash transfers and also rice though the quantity of rice has been decreased,” said Sinha.

The most recent study on the DCTs, undertaken by researchers from the Abdul Latif Jameel Poverty Action Lab and commissioned by the NITI Aayog, has come up with mixed findings, Many of those interviewed said they preferred cash transfers as they could use the money to buy better quality grain. However, a large number were not even aware that money had been transferred into their account.

If this is the situation with MGNREGA, cash transfers are likely to be even less effective in ICDS, given that the prospective beneficiaries are entirely women and children. Low female literacy, distance from banks and inability to directly access and control bank accounts will ensure that the money, if it reaches the accounts at all, will go into the hands of male family members and may be easily diverted for spending on items other than nutritious food. 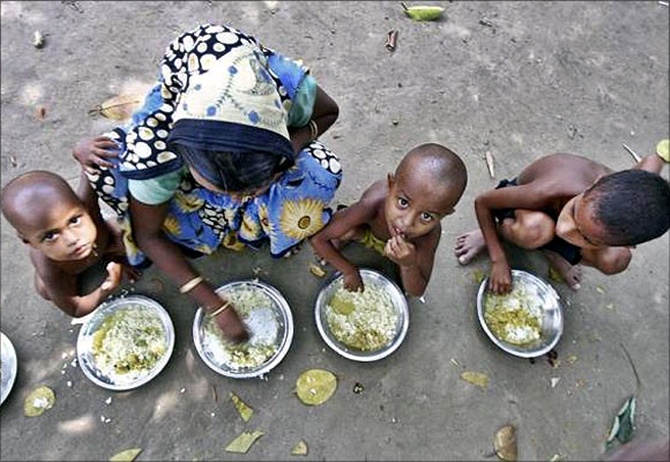 Nutritionists warn that there are major bottlenecks involved in cash transfers and it is keeping this in mind that states like Odisha, Jharkhand, Chattisgarh and the southern states have spent time and money in streamlining their PDS systems. Odisha, for example, has de-privatised ration shops and handed over their running to co-operatives, self- help groups and panchayats and this has proved effective.

Gandhi is also making a strong push for ‘nutrient packets’, declaring these will reach every child through the postal service.  If that happens, the Anganwadi workers’ primary role as providers of food and feeders of children will be diminished. Anganwadi workers, treated by the state as poorly paid volunteers are becoming increasingly vocal, have organised into trade unions and are demanding that they receive proper wages. The government may be anxious to rid itself of the financial burden that will accrue in the years to come.

Apart from the anganwadi workers, another 25 lakh women are employed in ICDS to cook and serve the food. Is the government going to get rid of them Sinha asks.

For the present, MCWD secretary Rakesh Srivastava says that the ministry has no concrete plan to replace cooked meals, it can provide only guidelines and it is for the states to take action. The states have no plans to replace hot cooked meals since this is part of the NFSA with anganwadis playing a crucial role in overseeing their implementation, he says.

But whatever explanation Srivastava may offer, others in the ministry admit a pilot project on DCTs has been worked out by ministry mandarins and is expected to be operationalised in the near future.

However, dismantling a program of the size of ICDS will not be easy. There are many factors at work.  ICDS projects involve large contracts running into thousands of crores. Sinha says, “In UP, the supplementary nutrients contract worth over Rs 1000 crore had been contracted to the liquor baron Ponty Chadda’s Great Value Food. Several nutritionists had accused this group of providing substandard food, a finding which was confirmed by tests conducted by the premier National Institute of Nutrition in Hyderabad.’

Nutritionists also point to the absurdity of replacing wholesome fresh food with packaged food that contains preservatives which are particularly damaging for the health of young children.

It now appears, from recent news reports, that Swami Ramdev’s Patanjali Ayurveda is set to bag the Rs 700 crore mid-day meal program for UP where cooked food will be replaced by nutrient packets. In Maharashtra moves were made to replace freshly-cooked meals with ready-to-cook packed food and tenders were issued for it. The MWCD had been toying with the proposal to provide ready-to-use therapeutic food for children with severe malnutrition but this proposal was vetoed by the health ministry. This led MWCD to backtrack and Maharashtra was forced to cancel its tenders for this scheme.

Devika Singh, doyen of Mobile Crèche that provides services to urban poor settlements, is aghast at all these developments. ` It defies belief that we want to hand over this life saving scheme to corporate houses who function on the basis of profit motives.’

She says the need is to restructure the ICDS and link it with the government’s Early Childhood Care & Education policy. “The ECCE focuses on developing the cognitive, socio-emotional and creative skills of kids under six and also to provide a synergy with their health and nutrition requirements.”  Ideally, the anganwadi should house a creche and provide full day services so that children under six and their mothers are served in a holistic way, she suggests.  The Rajiv Gandhi National Creche scheme with a meagre budget of Rs 200 crore covers only 3.37 lakh kids whereas 2.32 crore kids need to be taken care of, Singh points out.

Instead of expanding ICDS and incorporating such progressive measures, the government seems to be going one step backwards. But India’s impoverished, underfed and often unlettered mothers and their children need much more than just a bit of cash in the bank.