Suhrawardy, a largely forgotten figure today, was Bengal's chief minister in 1946 and is often mis-remembered as a Hindu-hating communal leader. 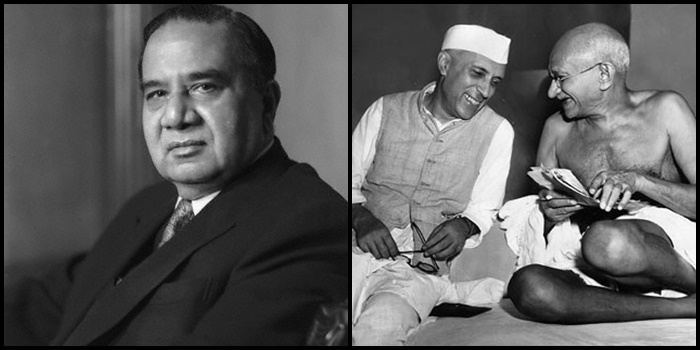 The location, Calcutta. The year, October-November, 1946.

Someone shouts out from the crowd: Death to Gandhi

The drama subsides and Nehru approaches a reclining Gandhi with Bengal Chief Minister Huseyn Shaheed Suhrawardy by his side.

Nehru: Bapu, I have brought Mr. Suhrawardy. It was he who had called on the Muslims to rise. He is now telling them to go back to their homes, to lay down their arms.

Nehru (to Gandhi): Think what you can do by living that you cannot do by dying.

It is understandable that the focus of the film being Gandhi, not much time is wasted on who Suhrawardy is and why he had done what he had done. The screenplay quickly comes back pointedly to Gandhi.

Most viewers don’t know who Suhrawardy is. In the scene Nehru does not introduce him. In fact, it is such a fleeting scene that even if one knows Suhrawardy, they miss his character.

Suhrawardy however, was not just some Muslim leader who had caused a riot. He was the then chief minister of Bengal. The Government of India Act 1935 had granted provincial autonomy to India and that meant some provinces could elect their own chief ministers. A former Swarajist, in 1946 Suhrawardy is a Muslim League man. He came from one of Bengal’s most elite families, had an Oxford degree and a Russian wife. The depiction of Suhrawardy in a suit in Gandhi is accurate.

The scene is significant only because Bapu’s fast comes to an end after this. Suhrawardy’s presence is negligible. Not just in cinema, in historical writing too, national figures get more attention than provincial ones and this is Gandhi we are talking about.

But for the sake of history – India’s history – now that 70th anniversary of its independence is upon us, let us look at the scene a little more closely for some nuanced understanding of representations of our past.

For one, apart from a nod, Suhrawardy (played by Shekhar Chatterjee) is not given a line. Then, when Nehru talks about Suhrawardy asking Muslims to rise, the audience is allowed to guess at least that maybe the reference is “rise” in demand for Pakistan. But quickly Nehru clarifies that the Muslims would now “lay down their arms” as Suhrawardy had instructed, leaving no room for doubt that Suhrawardy had in fact caused these riots to happen.

There is agreement among historians that the kind of communal savagery India witnessed in the 1940s, especially 1946-1947, was unprecedented, because it had gained its own momentum and had no longer been controlled by political parties like the Muslim League or Congress. The riots that form the backdrop to this scene is known by many names – the Great Calcutta Killings, Calcutta 1946 Riots and Direct Action Day – August 16 – are the more famous ones.

More than ten thousand people died in a four-day period. Corpses were lying around in the streets, preyed upon by dogs and vultures. This was not a riot that Suhrawardy could have just stopped by asking Muslims to go back to their homes. Yet, in this short incisive scene, Attenborough chooses to collude with all those Bengali Hindus and conspiracy theorists, in simplistically portraying Suhrawardy as a villainous figure with blood on his hands.

Yet even in this negative portrayal, Gandhi serves Bengal’s political history well. It shows Suhrawardy agreeing to end communal conflict. Suhrawardy has come in person to assure Gandhi that the communal rioting would end. It piques interest in this character and just going by the scene, he is communal enough to start a riot but also nice enough to stop it so that Gandhi can end his fast unto death.

In the absence of a political biography, a diary or sustained secondary literature, Suhrawardy is a largely forgotten figure today and if remembered, then as a Hindu-hating, communal leader. This is why understanding the politics of Attenborough’s scene is so crucial. Ironically, Gandhi, until now, is the best chance Suhrawardy has, of surviving as a historical figure. And the film still enjoys wide viewership, in India and outside.

Interestingly, and perhaps even thankfully, no archival evidence can corroborate the view that Suhrawardy asked Muslims to raise arms against Hindus. He is not more culpable than Gandhi, who asked Indians in his paper Harijan, to take up arms in self-defense during the Quit India movement. So the popular view among those who know about Suhrawardy has no basis in history and neither does the scene from Gandhi.

Few people know what happened to Gandhi and Suhrawardy after that scene. For that though, there is archival record. Gandhi and Suhrawardy maintained a filial relationship ever since Khilafat days in the early 1920s – promising days of Hindu-Muslim unity. In fact two days before partition, Suhrawardy stopped Gandhi from going to Noakhali and stayed with him through August 15, 1947. They put up in Hydari Manzil in Beliaghata, Calcutta. Mountbatten, governor general of free India, commented that while Punjab needed 50,000 soldiers to keep peace, Bengal had a “one-man boundary force,” Gandhi, with his “second-in-command,” Suhrawardy. 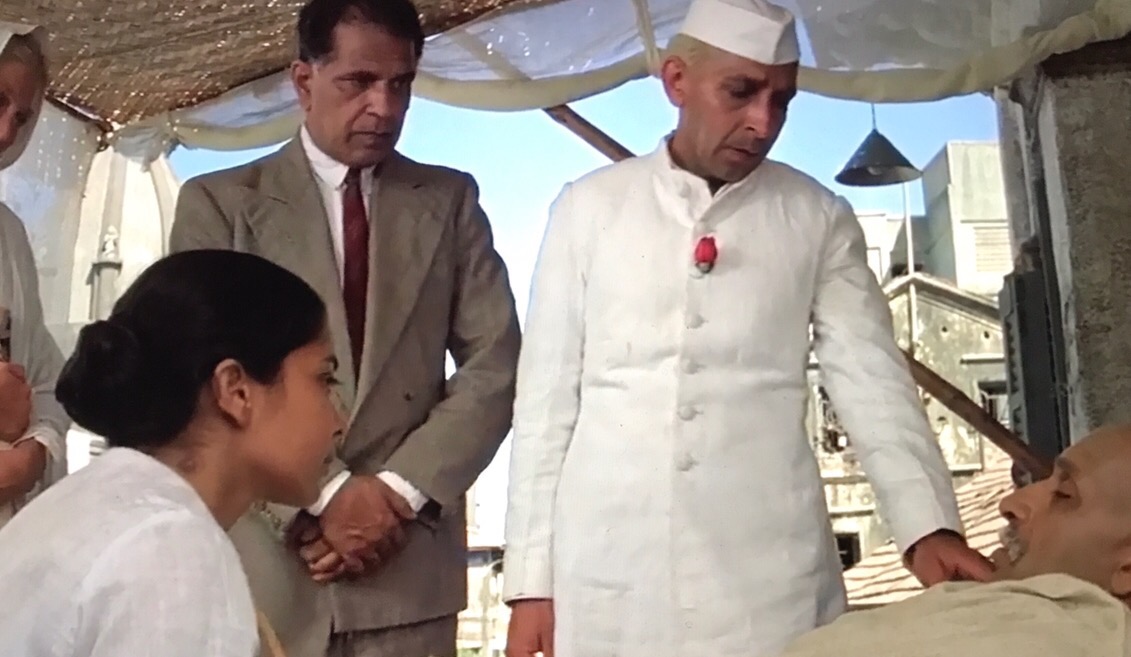 Suhrawardy may be remembered infamously for his part in the great killings and as chief minister maybe he even deserves to be blamed, but in his final estimate, it must be remembered that he was also the provincial leader who tried to change the course of Indian history by averting the impending partition of Bengal.

In 1946, Suhrawardy was sworn in as Bengal’s chief minister. For a third time since 1936 (Fazlul Huq and Khwaja Nazimuddin were the first two chief ministers), Hindus failed again to offer leadership or form a coalition. Bengal was of course a Muslim majority province but Bengali Hindus, bhadraloks especially, had been at the forefront of India’s national movement and as a community they were socially, economically and politically more advanced than the Muslims. While Hindus continued to feel shortchanged by this arrangement of Muslim leadership, it was to them that Suhrawardy turned to propose his United Bengal Plan.

In line with Bengali Muslim thinking on the question of Purba Pakistan (East Pakistan) Suhrawardy had wanted more autonomy for Bengal and freedom from the centre. When Bengali Muslims lent their support for the political idea of Jinnah’s Pakistan, it was not a foreign idea that they were learning to embrace. Bengali Muslims, had independently and for years cultivated the idea of a homeland in which both bangla and Islam (Urdu?) coexisted. Journals like Sikha, Saogat, Samyabadi, Langol and the Bangali Mussalman Sahitya Samiti played a critical role in development of this Bengali Muslim identity. As a product of that milieu, the idea of United Bengal was natural except that it was not.

The timing was wrong. A communally charged environment, divided communities and a quick decolonisation schedule threatened the possibility of success of the plan right from the beginning, but Suhrawardy persevered. Sarat Bose deplored Congress’ acceptance of Punjab’s partition and did not want the same for Bengal. The two came together. Suhrawardy officially announced the plan at a press conference in Delhi in April 1947. At its core the plan aimed to keep Bengal united as one entity. So it would neither join India nor Pakistan. Whether it would evolve into a separate country or what its relationship will be with Britain or even India and Pakistan was less clear. Mountbatten was very interested in this plan. On May 20, the United Bengal Agreement was prepared and signed at Sarat Bose’s house in Calcutta.

So why didn't it succeed?

It was one of Mountbatten’s conditions that the high commands of both parties would have to agree to it. Jinnah did not want a Bengal without Calcutta in his “Pakistan” and would much rather see Bengal stay united. Congress did not approve and their vehement rejection of the plan led to its failure. The masses in Bengal, Hindus and Muslims, also did not support it wholeheartedly. There was no time for sustained campaigning either. Suhrawardy, in any case had asked Mountbatten for two months to change Bengal’s mind, but was given only one. By the time Mountbatten read out his statement on June 3, where he changed the date of British withdrawal from June 1948 to August 15, 1947, the United Bengal Plan had officially failed.

The plan was not well thought out. If indeed Bengal would not be partitioned and would become its own country, then why did the opinions of the Congress and the Muslim League even matter? But even then the plan is historic because it stands to show how the years leading to partition and eventual independence of India, were full of possibilities. This very fascinating history will not be well served by willfully mis-remembering the actions of its historical actors, Hindu, Muslim or Sikh.