Talks will continue between the two parties on the main issue – the repeal of the three farm laws and the MSP guarantee – on January 4. 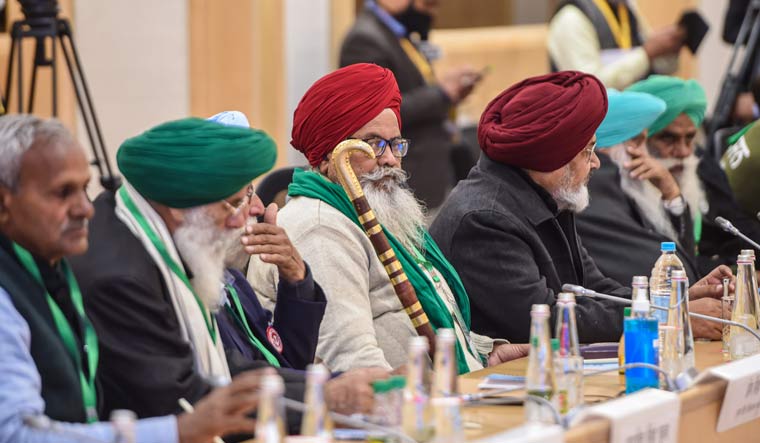 Farmers' leaders during a meeting with Union ministers at Vigyan Bhawan in New Delhi. Photo: PTI

New Delhi: The Centre and farmers’ unions reached some common ground on Wednesday to resolve protesting farmers’ concerns over rise in power tariff and penalties for stubble burning. The main issue of the three farm laws and a legal guarantee for Minimum Support Price, however, remains.

The Centre has agreed to exclude farmers from the law to curb pollution, the Commission for Air Quality Management in National Capital Region and Adjoining Areas Ordinance 2020. Farmers will also continue to get power subsidy for irrigation and the Centre has withdrawn the draft of the Electricity (Amendment) Bill, 2020.

After nearly five hours of the sixth round of negotiations between three Union ministers and a 41-member representative group of thousands farmers protesting on Delhi borders, Agriculture Minister Narendra Singh Tomar said “at least 50% resolution has been reached” with mutual agreement on two out of four items on the agenda.

“Discussions on the three farm laws and MSP are continuing and will continue in the next round of talks on January 4,” Tomar told reporters after the meeting ended.

He said talks were held in a cordial atmosphere and the two sides reached an agreement on two issues, one an ordinance on penal provisions for stubble burning and another relating to the proposed electricity law.

“First issue was an ordinance related to the environment. Unions were apprehensive about farmers being included along with Parali ones. Both sides agreed to farmers’ exclusion,” Tomar was quoted by Indian Express as having said.

“Farmers feel that if reform is introduced in the Electricity Act, they’ll suffer loss. Unions wanted the electricity subsidy given to farmers by states for irrigation should continue. The consensus was reached on this issue also,” he added.

He hailed the unions for “maintaining peace and discipline during their protest,” and urged them to send the elderly, women and children back to their homes due to the extreme cold weather.

According to the news reports, Patna Police on Tuesday lathi-charged a group of protesters who were trying to march to the Bihar governor’s residence to express their support for the farmers protesting at various borders of Delhi. On the same day, the Aam Aadmi Party (AAP) in Delhi announced that it would provide free WiFi to the protesters at Singhu border.

The farmers have been protesting against the new agricultural laws at different borders in Delhi since November 26.

Security remained tight at the Delhi borders on Wednesday with hundreds of personnel deployed at Singhu, Ghazipur and Tikri border points where the farmers have been camping.

Union leaders stuck to their demand to repeal the three farm laws at the meeting.

On farmers’ demand for a legal guarantee for procurement at MSP the minister said the government has already said that it is ready to give a written assurance.

“Talks will continue on these two issues,” Tomar said.

After the meeting, Union leader Kalwant Singh Sandhu said Wednesday’s talks mostly focused on electricity and stubble burning, while the next meeting on January 4 would focus on the MSP guarantee and the three farm laws.

Tomar was accompanied by Food and Railways Minister Piyush Goyal and Minister of State for Commerce Som Parkash at the meeting.