There is a ‘New India’ and it has now acquired its own ‘new ruling elite’ which has enormous faith in the efficacy of heavy-handedness. 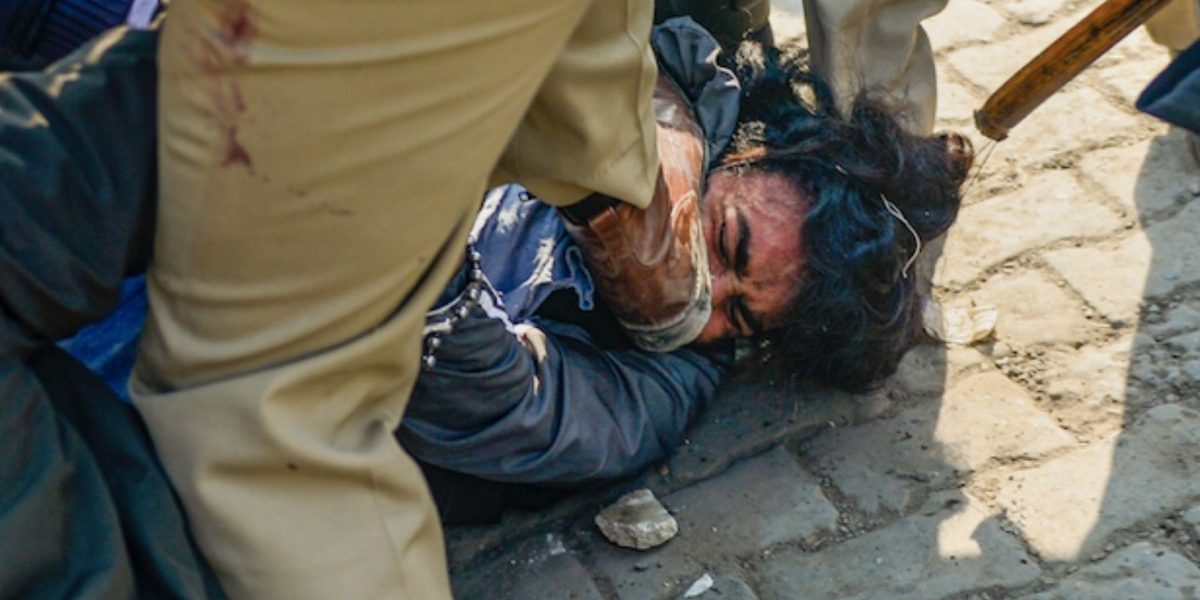 A policeman's boot is seen on a man's face in Singhu on January 29. Photo: PTI

First, a bit of history.

December 24, 2012. New Delhi. After two days of orderly, peaceful expression of outrage and anger, the Nirbhaya agitation erupted into ugly violence as anti-social elements made their presence felt. The scene of chaos and disorder was around the iconic India Gate. So much so that the summit between President Vladimir Putin and Prime Minister Manmohan Singh had to be shifted from Hyderabad House to the prime minister’s residence on Race Course Road (as it was called then). The mobs had prevailed.

This was a national embarrassment but it was widely serenaded as a righteous denouement justly visited on a discredited regime. No one wants to be reminded that all those who are today screaming ‘chaos’ and ‘shame’ about the January 26 breakdown of discipline among a section of the protesting farmers, were the very voices most vociferous in applauding that unruly demonstration  of this street power around India Gate, a worthy reaffirmation of civil society and a muscular assertion of its inherent right to vent its angst against an insensitive government.

That was ‘old India.’ Today we have proclaimed a ‘new India.’ And all those proponents of defiance and dissent have become a police state’s approvers. The colossal intelligence failure and the police’s ineptness, so demonstratively evident on January 26, are conveniently being attributed to the farmers’ protesting leaders and their unreasonableness in begging to differ from the Centre’s preferences.

We seem to forget that if there is one thing that the Indian police forces are very good at, it is the management of large number of people. Big crowds are an Indian policeman’s metier. Any reasonably good sub-inspector is professionally trained to figure out when an orderly crowd is about to degenerate into a disorderly mob. This has been the trick of maintaining a semblance of order during huge gatherings and congregations. That basic task eluded the political commissars and the epauletted commissioners who now jointly steer the Delhi Police.

The disorder, planned or accidental, has already been seized upon by corporate mouthpieces to declare there must be “no more concessions.” There is a sadistic satisfaction at this unhappy turn; never mind that peaceful, orderly demonstrations also took place across more than 40 cities and towns. 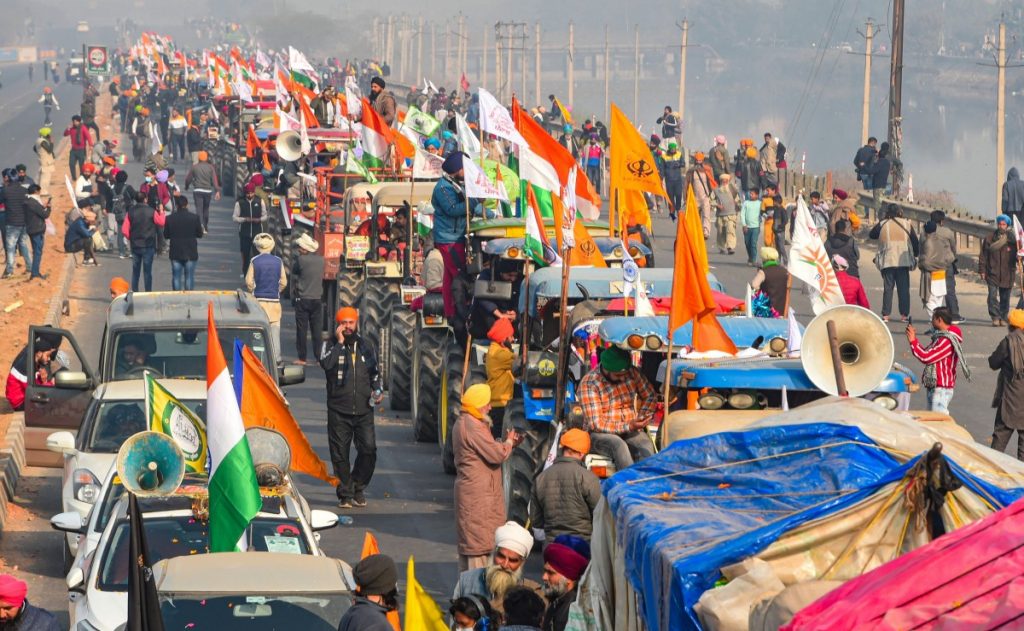 A sensitive regime would have understood that the gathering at the Singhu border was becoming a stagnant crowd and it needed to discharge its accumulated emotional overload. The January 26 parade was conceived as a legitimate way out to allow those thousands of farmers to experience a moment of ‘accomplishment’ and even ‘victory.’ That was not to be. The all-knowing and all too clever ruling clique has tricked the ‘movement’ into an afternoon of blunders.

It was then immediately proclaimed that the ‘mass movement’ has fizzled out. That was the ‘breaking news’. Within the space of a few hours, the middle classes were relieved of their dilemma; it was not easy for them to ignore the moral strength the farmers’ gathering had generated till January 26 morning; the middle classes’ natural inclination is to align with a morally worthy cause; but they also deeply apprehensive of any hint of disorder and chaos, certainly not in the heart of the nation’s capital.

So now they are being urged to applaud, without a guilty conscience, as the “authorities” unleash violence and force against the farmers on the outskirts of Delhi. As per the new blue book of intimidation and ‘pacification,’ the farmers’ leaders have been entangled in numerous legal cases, in the cynical hope of  bleeding the farm leadership to exhaustion.

Yet it needs to be asked as to what happens to all the anger, resentment and the existential anxieties the farmers have experienced and which, in the first place, drove them to congregate at the Singhu and other border points around Delhi. Have all those emotional fears and apprehensions lost their rationale just because a bunch of miscreants went off the script? Has the ‘movement’ really lost its sanctity and authenticity?

Also read: In Photos: Ghazipur, on the Day Farmers Refused to Bow Down

Make no mistake about the ‘movement’ and its motivations. Behind the movement remains pain-staking mobilisation; the movement leaders imaginatively enlisted almost all sections of Punjab society; farmers from Haryana and western Uttar Pradesh are very much part of the mix. It is a sort of cultural experience to be savoured and sustained. 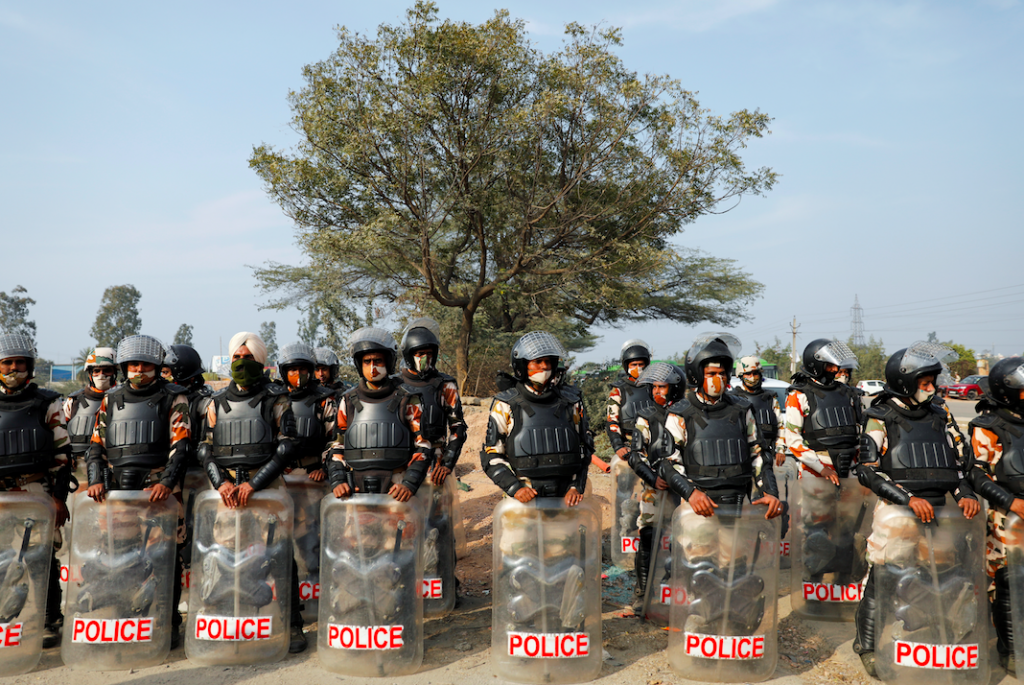 It should also be noted tht the mobilisation acquired a definite edge because two malignancies have been injected into the body-politic in recent years.

First, the minorities of all shades and hues, especially in Punjab, are beginning to feel the force of Hindutva’s imperial project – demanding uniformity and compliance to the Nagpur-invented notions of who would be deemed an Indian. Sullen and silent anger has been building up all over the country.

The second malignancy has an older provenance. The working classes, the landless labourers, marginal farmers, the urban under-classes, all have reason to be resentful of the relentless march of a marauding capitalist bandwagon.

In the Modi era, the “reform” orthodoxy has been raised to the level of a state-mandated religion – no questions, no opposition, no doubts allowed. There is a Stalinist assertion that the ruling clique and its anointed priests alone know what is best for the country and how the county’s common resources are to be allocated to achieve these mysterious ‘reforms.’

There is a ‘New India’ and it has now acquired its own ‘new ruling elite’ which has enormous faith in the efficacy of heavy-handedness – traditionally a part of the armoury of the Indian state.

It has imperious contempt for any resistance to its preferences and prejudices. Nor does this new ruling elite hesitate to maul a section of the society. In its entrenched arrogance, it believes it can live with resentments and can put the resentful in their place.

The farmers will go back to the barricades and are prepared for a long haul. No segment of society easily reconciles itself to disempowerment; certainly not when it is dished out in a manner that it finds hurtful to its self-respect and pride. And the farming community in Punjab and elsewhere may be short on many social virtues but it is not lacking in the collective strength of resilience and resistance. Any ruling regime in imperial Delhi that ignores this enduring phenomenon can do so only at a great national cost.