The Centre claimed in the Supreme Court that efforts had been made to speak to stakeholders before the laws were passed. Why, then, does the agricultural ministry have no record of these efforts? 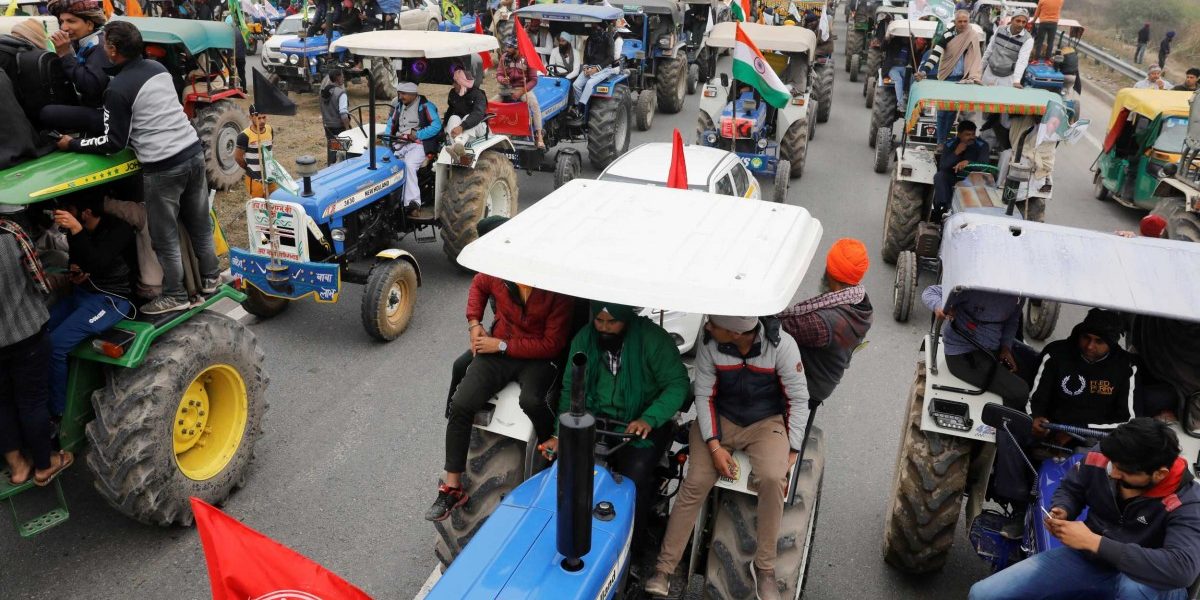 Farmers participate in a tractor rally to protest against the newly passed farm bills, on a highway on the outskirts of New Delhi, India, January 7, 2021. Photo: Reuters/Adnan Abidi/Files

New Delhi: In an affidavit filed before the Supreme Court on Monday, the Centre claimed that “serious, sincere and constructive efforts [were] made by the Central Government to engage with the limited number of protesting farmers who are opposing the Act”. However, recent Right to Information replies by the Ministry of Agriculture reveal that it possesses no records of any such consultations with various stakeholders, especially farmers’ unions.

In an RTI query filed with the Department of Agriculture, Cooperation and Farmers Welfare on December 11, 2020, activist Anjali Bhardwaj had sought information on the process of consultation, if any, followed before the passage of the farm Bills.

Stating that “as per the decision taken in the meeting of the taken in the meeting of the Committee of Secretaries (CoS) held on January 10, 2014 regarding the Pre-legislative Consultation Policy (PLCP), every department/ ministry is required to proactively place in the public domain all proposed legislations for a minimum period of thirty days,” the application asked for “information (indicating the exact website address) where the following were proactively made available” in connection with the ordinances and acts in question.

The query sought information regarding the “Farmer Produce Trade and Commerce (Promotion and Facilitation) Ordinance, 2000; the Farmers (Empowerment and Protection) Agreement on Price Assurance and Farm Services Ordinance, 2020; and the Essential Commodities (Amendment) Ordinance, 2020. It also asked for similar information with respect to the three corresponding Acts that were brought in 2020.

The application also stated that the Central Information Commission in its decision dated July 7, 2010 directed that a credible mechanism be put in place for proactive and timely disclosure of draft legislations in the public domain, as required under Section 4(1)(c) of the RTI Act, during the process of their formulation and before finalisation.

Bhardwaj asked for information on the procedure adopted to proactively disclose the drafts of the aforesaid three Ordinances and corresponding Acts of 2020.

The CPIO of Marketing I also disposed of the matter on January 6, 2021 stating: “I am the CPIO in respect of Marketing I Section dealing with administrative work of the Agricultural Marketing Division, Department of Agriculture, Cooperation and Farmers Welfare.” The response added that “the information sought by you does not pertain to Marketing-I Section. Further, your RTI application has already been marked online to CPIO, Marketing II Section who deals with scheme-related work in respect of Agriculture Marketing Division. In view of this, in so far Marketing-I Section is concerned, the information is treated as Nil.”

Ministry also had no information on consultations, participants

An identical reply was furnished by the CPIO of Marketing-I Section – after the plea was forwarded by three other CPIOs – in response to another application filed by Bhardwaj on December 15. In this application, Bhardwaj cited a media report to state that it was reported on December 11 that “in the run up to preparing the three farm laws and bringing in the ordinances on June 3, 2020, the Agriculture Ministry had consulted various experts, former officials, agriculture departments of various states and some progressive farmers and prominent mandi officials.”

As the replies by the agriculture ministry revealed, the section dealing with the administrative work of the Agricultural Marketing Division had no knowledge about any such deliberations or consultations.

Reacting to the replies from the ministry, Bhardwaj said, “The Government has filed an affidavit in SC claiming they did consultations on the farm laws. The responses to the RTI applications above, however, show the Agriculture Ministry is saying they have no such information.”

‘Erroneous notion’ that there was no consultative process: Centre

The preliminary affidavit filed on behalf of the Union of India by secretary in the Ministry of Agriculture and Farmer Welfare, Sanjay Agarwal, stated that its purpose was to bring some “unquestionable facts” before the apex court.

The Centre submitted that the “affidavit is necessary for the purpose of dispelling the erroneous notion that the protestors have peddled that the Central Government and the Parliament never had any consultative process or examination of issues by any Committee before passing of the laws in question.”

It said “an impression was created that the Acts in question is passed hurriedly without undergoing any process” and that the reply was being filed to place before the court “the serious, sincere and constructive efforts made by the Central Government to engage with the limited number of protesting farmers who are opposing the Act.”

Under a sub-head, “Steps taken prior to the legislations”, the Centre submitted that “the need for reforms in agriculture marketing sector was felt and conceived in late nineties after kick-start of economic liberalization in the beginning of nineties so as to ensure better and competitive price realisation to the farmers and encourage capital formation in the sector.”

Podcast: For Farmers, the Protests Are Not Just About Incomes. The New Laws Will Destroy a Way of Life

On the developments that took place after the BJP government under Narendra Modi came to power in 2014, the affidavit stated that “as part of doubling farmers’ income, Government of India has taken multipronged initiatives and another one of them is formulation of Model Act “the Agricultural Produce and Livestock Contract Farming and Services (Promotion and Facilitation) Act, 2018””. The Model Act, 2018, it said, aimed to mitigate the market and price risk of farmers on one hand and to supply quality inputs, production technology, services to the farmers to enhance per unit cost efficient productivity so as to improve farmers’ net income.

Only one recent deliberation, that too with officials of states/UTs

More recently, it said, “on 21st May, 2020, a meeting was held by Department of Agriculture, Cooperation and Farmers’ Welfare, with the officials of States/UTs, which was attended by 13 states/UTs, to obtain feedback on new legal framework facilitating barrier free inter-state and intra-state trade in agriculture produce top provide choice to farmer. As prepared by the Government of India.”

The Centre claimed it “has been, thus, actively and intensively engaging with the States for about two decades to achieve the aforesaid objectives of reforms to provide accessible and barrier free market system for better price realization but states either showed reluctance to adopt the reforms in true spirit or made partial or cosmetic reforms.”

However, while the affidavit did not specify any details of consultations which the Centre may have held with various stakeholders before bringing in the legislations, that have since led to strong protests by farmers in various parts of the country, the RTI replies by the ministry to queries on such consultations have also revealed that the ministry does not possess any information of such consultations.