The brother and 'samdhi' of Justice B.S. Chauhan are BJP legislators while former DGP K.L. Gupta is related to the inspector general of police, Kanpur zone, where the controversial encounter took place. 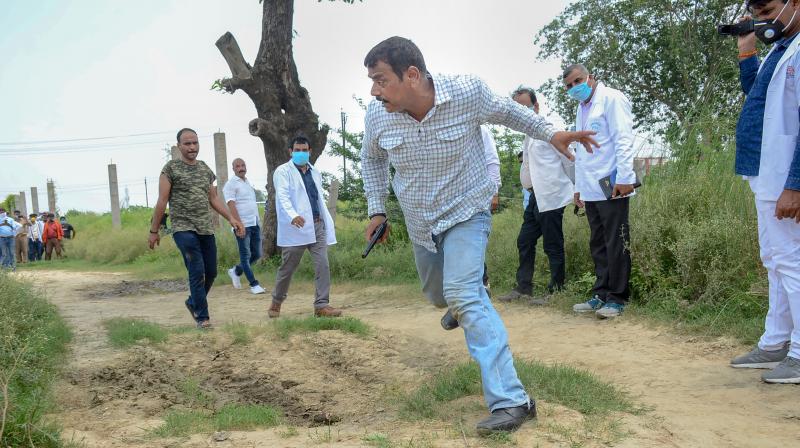 STF and forensic teams re-enact the events leading to the encounter of gangster Vikas Dubey as part of the investigation in Kanpur. Photo: PTI

Lucknow: Two members of the three-man commission set up by the Supreme Court to probe allegations that the death of gangster Vikas Dubey in a shootout with the Uttar Pradesh police was actually a custodial killing have family ties with either the ruling Bharatiya Janata Party or the Kanpur police which raise questions about potential conflict of interest.

On Tuesday, the Supreme Court dismissed pleas by the petitioner in the case for retired director general of UP police K.L. Gupta to be taken off the commission, ruling that the views he had expressed on television supporting the police version of the July 10 encounter near Kanpur did not disqualify him. “Gupta had also made it clear in his statements that if any policemen will be found guilty, then they will be taken to task,” PTI reported the bench saying.

The petitioners had pleaded that Gupta’s comments on television justifying some of the police’s claims meant he had made up his mind and was unlikely to probe the incident objectively.

However, the court was not made aware of another potential conflict of interest that could make it difficult for Gupta to be independent: he is related to Kanpur zone Inspector General (IG) of police Mohit Agarwal, whose role in the Vikas Dubey encounter is bound to come under question during the course of the inquiry as the policemen accused of illegally shooting the gangster broadly come under his jurisdiction.

Former judge has close family ties in the BJP

Curiously, neither the petitioner nor the court seemed aware of the fact that former Supreme Court judge B.S. Chauhan – the commission’s designated head – might also face a conflict of interest in probing the role of the UP police and government in Dubey’s killing.

This is because at least two of Justice Chauhan’s close relatives are legislators with the Bharatiya Janata Party – which runs the government in Uttar Pradesh and has tremendous political stakes riding on the outcome of the commission’s work.

Interestingly, the names of Justice Chauhan and Gupta were both proposed as members of the commission by solicitor general Tushar Mehta in consultation with the UP government, following which the apex court decided to nominate them on the judicial panel.

Justice Chauhan’s younger brother, Virendra Singh, is currently a BJP member of the legislative council in UP. He began his political career in the Samajwadi Party and was a legislator during the chief ministership of Mulayam Singh Yadav and Akhilesh Yadav. However, he and his son switched loyalties to the BJP last year. Justice Chauhan’s brother now sits on the treasury benches in the upper house of the state legislature and is known to be among the front-runners for a berth in Yogi Adityanath’s council of ministers whenever the next expansion takes place.

In addition, Justice Chauhan’s daughter is married to the son of BJP MP from Rajasthan, Sukhbir Jaunpuria, making the former judge and the BJP Central legislator what are called ‘samdhis‘ in Hindi.

The Wire asked Justice Chauhan whether he had disclosed these two relationships to the Supreme Court so that the bench could take a considered view on whether this would give rise to a conflict of interest. After all, the sworn affidavit submitted by the UP director general of police makes a number of astonishing claims about the July shootout. Even if one of them is proven to be false by the commission, the DGP runs the risk of being accused of perjury, not to speak of the political embarrassment this would cause the government and party to which Justice Chauhan’s brother and samdhi are senior members.

“If anybody wants to raise the issue before the Supreme Court, he is free to do so,” he said. “Let the apex court take a call on that.”

Curiously, Justice Chauhan also insisted his brother had not joined the BJP. “My brother is not an MLC of the BJP but he is with the Samajawadi Party,” he said. (After the judge’s denial, The Wire contacted the UP Vidhan Parishad Secretariat, which confirmed that Virendra Singh had indeed formally shifted allegiance to the BJP more than a year ago, on March 31, 2019.)

As for his relationship with Jaunpuria, Justice Chauhan said there was no need to disclose this. “I was a Supreme Court judge and everybody knows that my daughter was married to the son of this BJP MP from Rajasthan. Why should I be informing the Supreme Court?”

Asked about his relationship to IG Kanpur zone Mohit Agarwal, former DGP K.L. Gupta told The Wire, “Mohit is the son-in-law of my wife’s sister. But how does that matter? I do not think an IG has any direct role in any encounter. He only has a supervisory role so that should not be seen as any conflict of interest. But if people have such objections I will recuse myself from the commission.”

Gupta added that he had not asked anyone to be included in the panel. “I got a call from the home department to say that the CM wanted me to be member of the commission. I do not stand to gain anything. I have lived a full life and it does not add to my status that I am on a judicial probe panel.”

When asked whether he would be able to play the role of an open-minded, impartial investigator since he has already stated in the media that the Vikas Dubey encounter was genuine, Gupta said:

“I simply said that you should not dismiss the police version outright. And what I emphasised was that the magisterial inquiry will also go into the police version so media must not jump to conclusions and dismiss every word stated by the police. After all,  you and I were not present at the time of encounter so you must give some credence to what the police says…  I am being unnecessarily accused of pre-judging”.

“Mind you,” he added, “I also condemned the station officer who apparently tipped Vikas Dubey about the police raid. Such a man should be shot,” he said, oblivious of the fact that he has now been tasked with probing whether Dubey was killed in a genuine shootout or by the bullets of policemen who believed ‘such a man should be shot’.

Ironically, Gupta during his own days as DGP came under fire for the large number of questionable encounters in Uttar Pradesh on his watch. As India Today magazine reported on August 17, 1998:

“’Only hardened criminals have been killed. Had there been innocents involved, the judiciary would have taken us to task,’ says a defensive DGP K.L. Gupta, adding that the 200 encounter deaths were those of hardcore criminals like Arvind Pandey, Surajpal Yadav, Jarnail Singh.”

Gupta’s 1998 words are a pre-echo of the justification heard for Dubey’s killing – that he was a dreaded gangster – but the former DGP today denies there was any controversy in his day: “I was praised by everyone for carrying out those encounters,” he told The Wire. The then chief minister Shri Kalyan Singh lauded me. You can see old media files to confirm that. There was no controversy.”

This is not the first time Justice Chauhan has encountered questions of conflict of interest.

Before getting elevated as a judge of the Allahabad high court, he was counsel for the NOIDA administration. However, as judge he did not hesitate to hear cases related to NOIDA. And in one matter, he went to the extent of ordering a CBI probe into the allotment of plots.

At the time, his brother, Virendra Singh, was rumoured to be among the unsuccessful applicants for special plot allotments made by the Mulayam Singh Yadav government in 2005. However, since there was many allegations of nepotism by the Mulayam-Amar Singh duo, who had allegedly made the allotments bypassing the laid down rules, the cancellation was ordered .

The Wire asked Justice Chauhan whether there was any conflict of interest involved in his adjudication of the matter. “I do not see any conflict of interest,” he replied. “My brother was not an applicant. His wife had applied. But let me tell you that this whole issue was raised before the Supreme Court when someone filed a PIL after the cancellation of the plots. The SC upheld the order through which, as a high court judge, I had ordered a CBI inquiry into the allotments. Mind you, my brother was a full fledged cabinet minister in the then Mulayam Singh Yadav government but he could not get a plot allotted to his wife.”

The petitioners in the Vikas Dubey encounter case had also asked the Supreme Court to remove  former Allahabad high court judge Shashi Kant Agarwal from the commission because of questions about his integrity. Agarwal was the Adityanath government’s original choice for the one-man probe panel set up right after the Dubey shootout. However, the court said it would not allow the petitioner to “cast aspersions” on the commission’s members.

Agarwal had resigned as a judge of the Allahabad high court soon after he was transferred to Jharkhand High Court following serious complaints against him. Subsequently, he started practicing in the Uttarakhand high court , where he continues even now. And that seems to be held against him as it is again unusual for a practicing lawyer to be asked to head a judicial commission – which is what the Adityanath government initially did.