Explainer: What Does it Mean for Certain Words to be Declared 'Unparliamentary'?

Declaring a word as 'unparliamentary' means that the speaker of the house had expunged it in the past for not squaring with the dignity of the house. Since most of the recent words were expunged in 2021, why have MPs only now noticed? 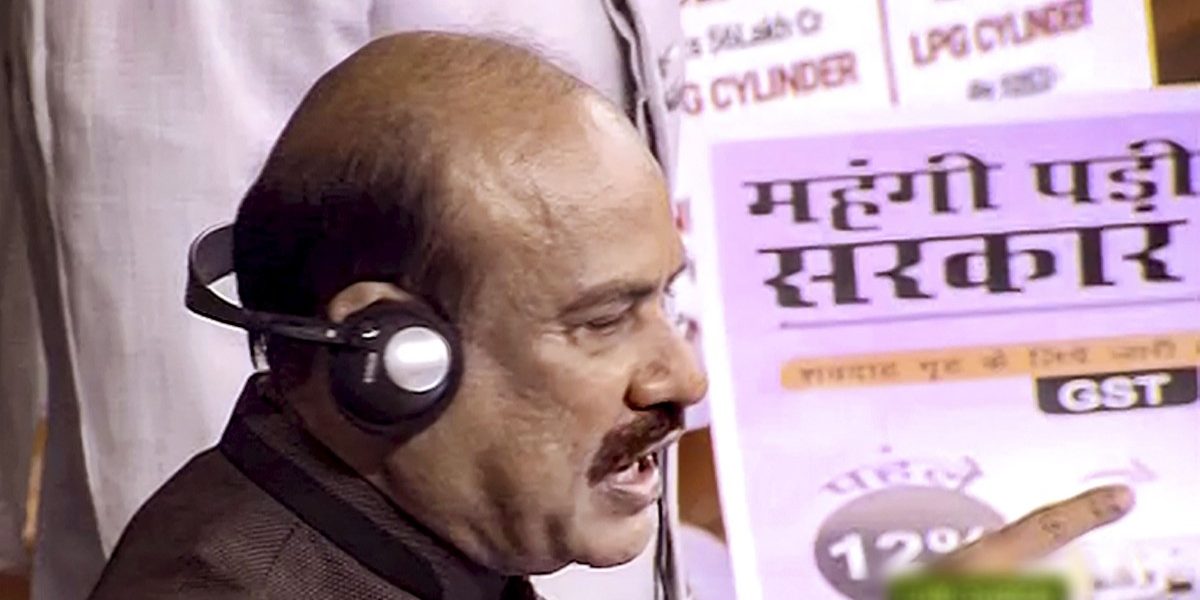 A Congress MP holds a placard in front of Lok Sabha speaker Om Birla during a protest in the house on Tuesday, July 19. Photo: PTI.

A huge controversy has arisen over a compilation of ‘unparliamentary’ words brought out by the secretariat of the Lok Sabha recently. The media highlighted the fact that this compilation contains a large number of words which are commonly used by MPs but are now on the list of prohibited, unparliamentary words. This mean that the Members of Parliament may not be able to use those words in their speeches in the house any longer.

The political parties in the opposition have raised serious objections to the move and said that it is an attempt to “gag” them. Subsequently, a bulletin was issued by the secretariat of Rajya Sabha prohibiting dharnas, demonstrations and the like, in front of the statue of Mahatma Gandhi in Parliament.

Lok Sabha speaker Om Birla, in the meantime, tried to clarify that no words have been banned and that a word becomes ‘parliamentary’ or ‘unparliamentary’ in the context in which it is used. But apparently, his explanation has failed to satisfy the agitated MPs of the opposition.

At the outset, a point or two need to be made by way of clarification to obviate certain amount of confusion in the public mind about the above compilation of unparliamentary words.

Again, in 2010, an updated compilation was brought out under the name of this writer, updating it till 2008. It is an ongoing exercise. A compilation only contains words which have already been treated by the chair as unparliamentary at different times in the past. It serves as a ready reference and also as a guide for parliamentarians, research scholars and so on.

The house rules empower the speaker to remove such words from the record of the proceedings.

Under Article 105 of the Constitution, members of Parliament have the freedom of speech in the house. This freedom is subject only to the Constitution and the rules of the house. It is a very substantive freedom without which parliamentarians cannot function freely and fearlessly. So, whatever they say in the house cannot be questioned by any other authority. It is a privilege enjoyed by the members of Parliament the world over.

The limits to which this freedom is subject are defined by the Constitution itself. For example, Article 121 bars any discussion in the house on the conduct of a judge of the Supreme Court or a high court, except when an impeachment motion is before the house.

Similarly, the house rules prohibit discussion on matters sub judice, or the conduct of persons in high authority, such as a governor, the President and other constitutional authorities, except on a substantive motion. Further, a member cannot make an allegation against another member or a minister in the course of his speech without proper notice and permission of the speaker.

Except these restrictions, members of Parliament have absolute freedom to say anything in the house. Further, the use of a particular style of expression, words and the like, is also a part of that freedom.

Rule 380 of the Lok Sabha rules empowers the speaker to expunge words which are defamatory, indecent, unparliamentary or undignified from the record of the debate. The speaker has been given certain discretion in treating a word as ‘unparliamentary’ as there are no hard and fast rules about it.

But this power of the speaker is not totally unchecked in the sense that he can not choose any word in a speech as he feels and expunge it as unparliamentary. The chair cannot exercise this power in such a way as to erode the freedom of speech conferred on members by Article 105 of the constitution.

This, in essence, is the issue which has arisen in the context of the compilation of unparliamentary words. A cursory glance at the list will convince a man or woman of ordinary prudence that many of the words expunged as ‘unparliamentary’ are not and cannot be so.

For example, words like ashamed, betrayal or betrayed, bloodshed, cheated, conversion, corrupt, corruption, coward, criminal, crocodile tears, cruel, drama, eyewash, fake, false, fraud, gag, heckler and more are normally used by members of Parliament in their speeches. By no stretch of the imagination can these words be deemed ‘unparliamentary’. Doing so may amount to an unreasonable curtailment of the freedom of speech of the members of Parliament in the house.

It may be noted here that all the words mentioned above were expunged from speeches in 2021. It is very surprising that the MPs did not know about it when the words were expunged.

Members who speak in the house get the uncorrected version of their speeches within hours so that they could make necessary corrections and send these back to the secretariat for printing. How is it that the fact that these words were expunged from their speeches escaped their notice? It shows lack of alertness. In fact, members of Parliament became aware of this drastic expunction of words from their own speeches only after the media highlighted it, after one year.

It is customary for the secretariats of both houses to issue bulletins to give information to MPs on various matters. Directions of the speaker or chairman on demonstrations and so on in the precincts of Parliament are routinely issued on the eve of the session. These routine bulletins cannot be the basis of any serious political grievance.

India’s politics demands the opposition to focus on substantial issues affecting the nation, inside and outside Parliament. The nation’s law makers should also not forget Thomas Jefferson’s famous quote: “Eternal vigilance is the price of democracy”.

P.D.T. Achary is former Secretary General of the Lok Sabha