The constitutional amendment was drafted and passed within 20 days, and the PMO played a special role in ensuring its passage. 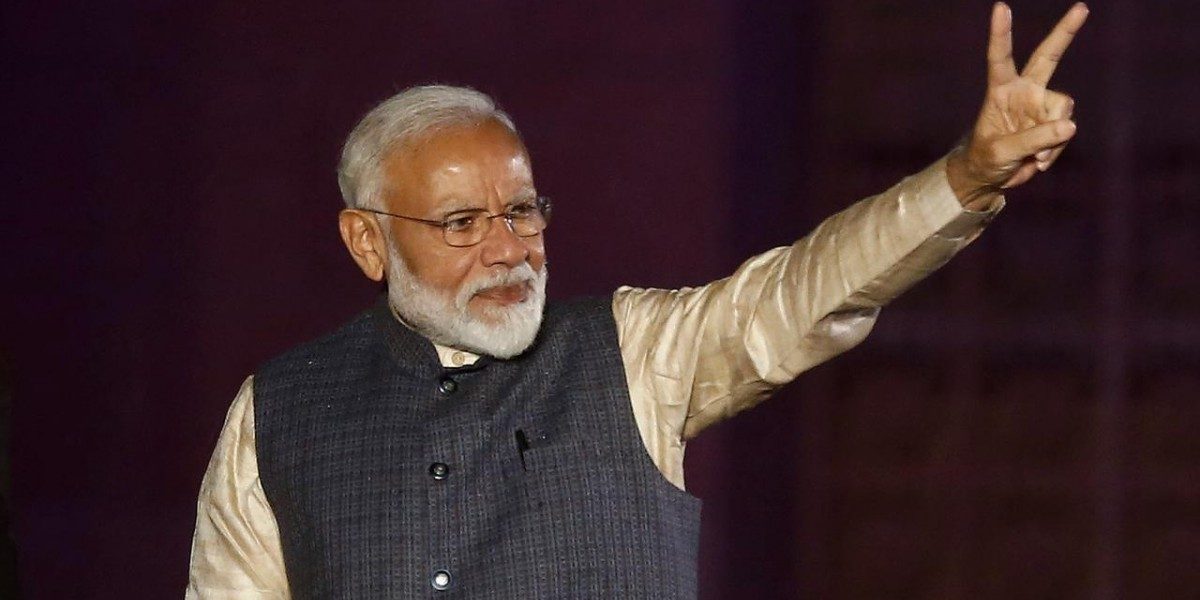 New Delhi: The Centre did not discuss the 124th Constitution Amendment Bill with any ministry or department other than the Ministry of Law and Justice before getting it passed by both houses of parliament in January 2019. The move, which provides for 10% reservation in jobs and education for poor ‘upper’ caste people, went from drawing board to law within a span of just 20 days.

Not only this – instead of getting cabinet approval for amendments in the office memorandum of the Bill,  Narendra Modi made use of a special privilege the prime minister has under government rules of business while the Union minister for social justice approved the cabinet note over the phone. In addition, on the request of the latter’s ministry, the Lok Sabha speaker gave special preference to the Bill and waived the conditional requirement of seven days to introduce it in parliament, documents obtained by The Wire under the Right to Information Act have revealed.

The timing was important. Ever since the Modi government had been forced to amend the Scheduled Castes and Scheduled Tribes (Prevention of Atrocities) Act in August 2018 to nullify the dilution of it by the Supreme Court in a landmark case earlier that year, the BJP incurred the wrath of ‘upper’ caste groups – a key vote bank of the party. According to some estimates, this backlash helped the BJP lose hold of Madhya Pradesh in the 2018 assembly elections. And no sooner was the upper caste quota introduced, the party moved to exploit it politically. “BJP had to face embarrassing comments after the SC/ST Act amendment was passed by Parliament. The EWS quota has come as a sigh of relief for BJP in Bihar,” a a BJP source was quoted by the Economic Times as saying on the day of its passage by parliament.

The files accessed by The Wire reveal that the Bill was brought forth after a meeting with the prime minister’s office, which played a leading role in its passage. 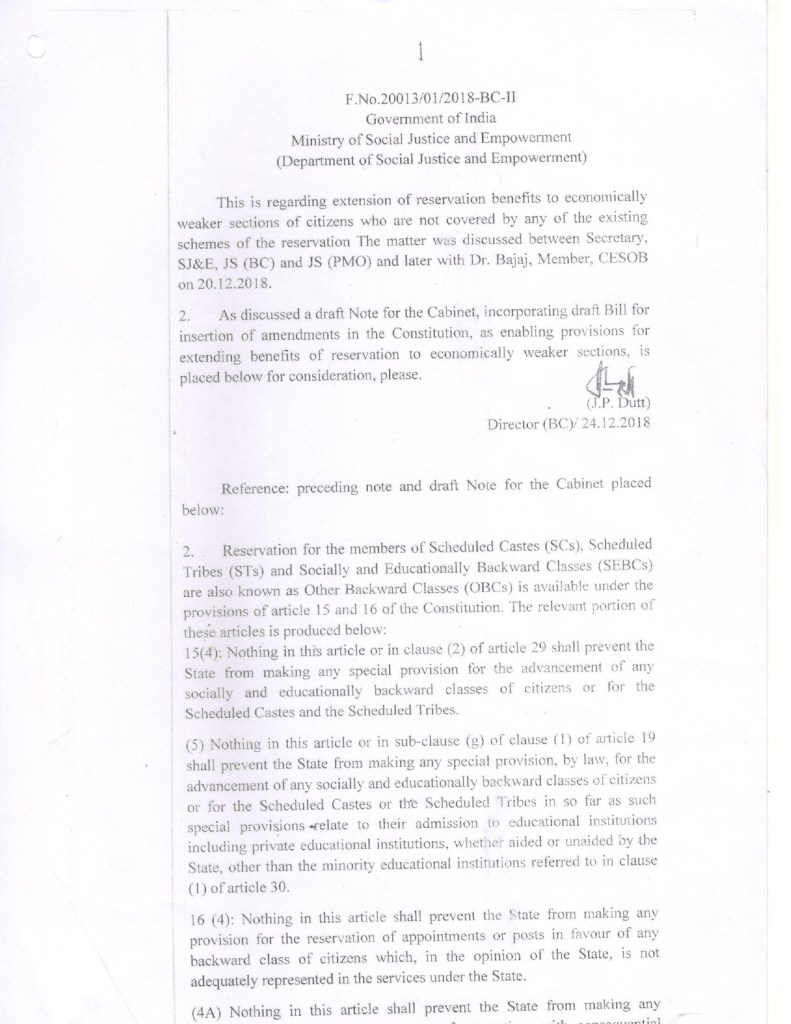 The decision to introduce the Bill was taken after a meeting between PMO joint secretary and secretary of the Ministry of Social Justice and Empowerment Neelam Sahni and ministry joint secretary B.L. Meena on December 20, 2018, followed by another meeting with J.K. Bajaj, member of the Commission for Sub-Categorisation of Backward Classes.

When the Bill was introduced in parliament barely weeks before the 2019 Lok Sabha elections, opposition MPs asked on what basis the government had decided to give this 10% reservation, whether any surveys had been done, on what basis the Rs 8 lakh income cap had been determined, and who advised the Centre that reservations on economic grounds would be constitutionally valid.

No answers were forthcoming, perhaps because the move was indeed a sudden and hasty one. It appears from the documents accessed that the government ensured the passage of the Bill in undue hurry and took merely 20 days to wrap up the entire process.

Also read: An SBI Exam Has Exposed the Illusion of the EWS Quota in Uttar Pradesh

It is clear from the file notes, correspondence and confidential cabinet notes accessed by The Wire that the 124th Constitutional Amendment Bill was not discussed with any ministry or department other than the law ministry. 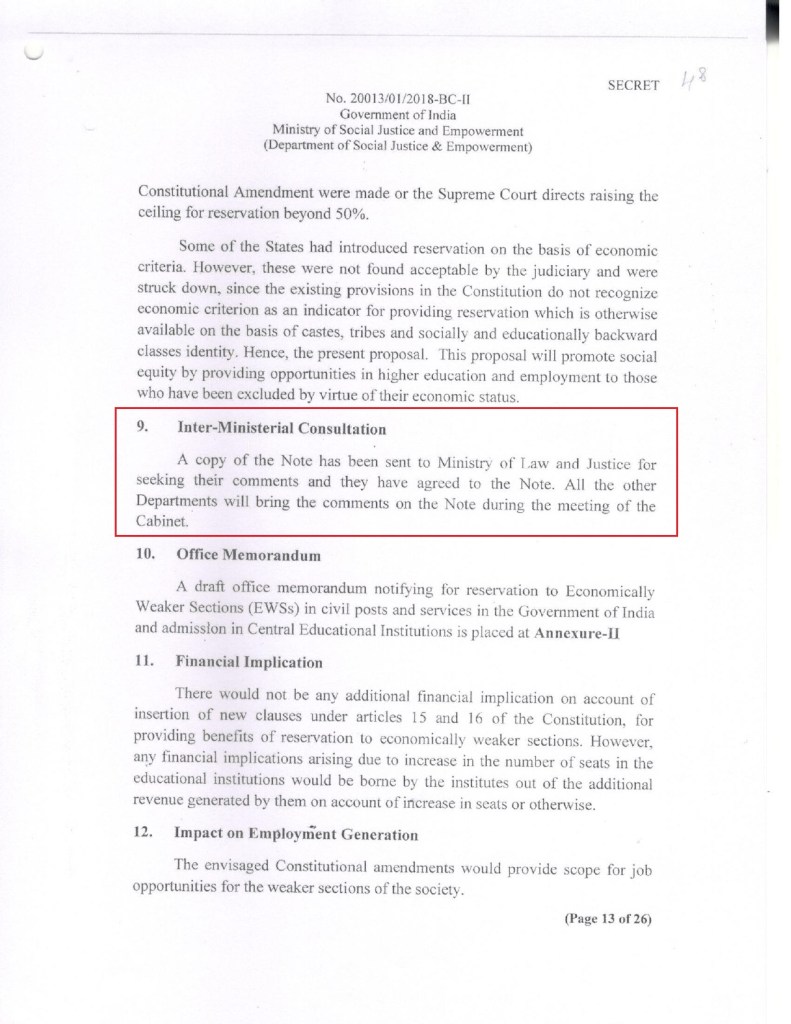 Other ministries and departments were asked to give their comments at the cabinet meeting.

According to the cabinet note, dated January 6, 2019 , “A copy of the Note has been sent to Ministry of Law and Justice for seeking their comments and they have agreed to the Note. All the other Departments will bring the comments on the Note during the meeting of the Cabinet.”

However, there is no file containing comments from any department or ministry other than the law ministry are in the records of the Ministry of Social Justice and Empowerment, which is the nodal ministry for the 124th Constitution Amendment Bill.

The Wire filed another RTI application in order to find out if the cabinet secretariat possesses a file in this regard. However, instead of replying to the query, the secretariat transferred the request to the Ministry of Social Justice and Empowerment a few days later. The public information officer of the ministry then replied, “This department does not have the details of comments, if any, made by the ministries other than the Ministry of Law and Justice. The RTI query has been transferred to the Cabinet Secretariat for providing information.”

However, the cabinet secretariat was also unable to give any information in this regard.

The government’s move is in contrast to the earlier legislative consultation policy issued by the Union law ministry in 2014, stating that any Bill should first be sent to the concerned ministry or department and their comments should be included in the cabinet note.

According to a ministry file note, S.R. Mishra, additional secretary of the law ministry, sent the file on January 6, 2019 expressing his consent for the proposal. The file bears the signature of the legal secretary as well as law minister Ravi Shankar Prasad.

On January 9, the Rajya Sabha also passed the Bill, which was then approved by the president and implemented on January 14, 2019. The entire process took no more than 20 days.

While answering the opposition’s questions in parliament, Union minister for social justice and empowerment Thawar Chand Gehlot thanked Modi several times instead of quoting any specific figures or survey. He said that this Bill could be introduced only because of the prime minister.

The minister’s statements are in sync with official documents, to a large extent.

On January 7, 2019, the cabinet passed an office memorandum (OM) regarding the Bill, which was to be issued after the Bill was passed. However, there were certain discrepancies between the Bill passed and the OM issued. 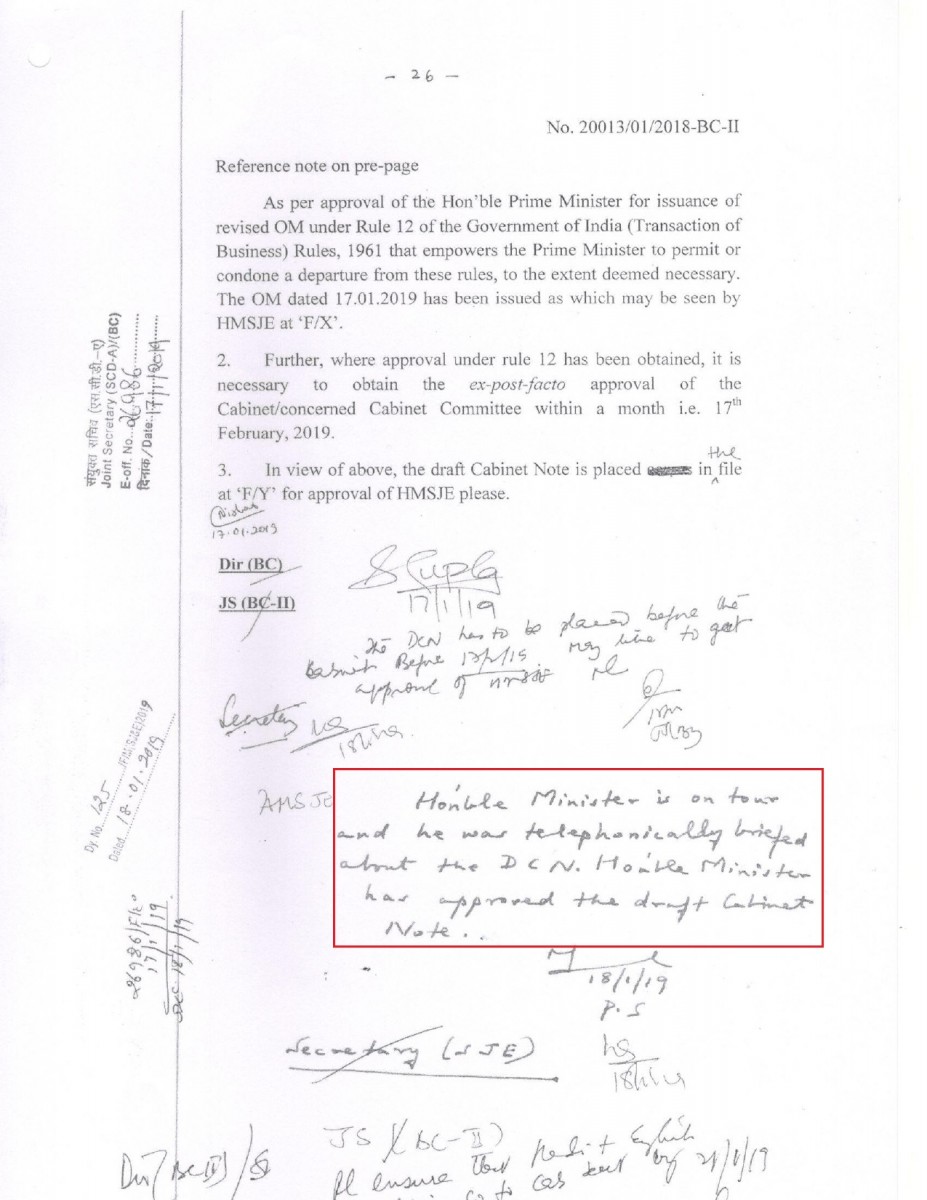 The document saying Gehlot approved the cabinet note on the phone.

A meeting was held regarding all these changes with the prime minister’s principal secretary, in which the secretary of the Ministry of Social Justice and Empowerment and secretary of the Ministry of Human Resource Development also participated. Usually, such changes are made after cabinet’s approval. However, Modi approved these changes using a special privilege under Rule 12 of the Transaction of Business Rules. After receiving such approval from the prime minister, official cabinet approval must be taken within a month.

It is noteworthy that the draft cabinet note made for this was approved by Gehlot over the phone.

It is clear from the confidential cabinet note accessed by The Wire that there is no specific basis for prescribing a limit of Rs 8 lakh and 10% share of reservation for the EWS category.

The government resorted to the recommendations of the Sinho Commission set up in the year 2005 to introduce this Bill but rejected the definition of economically backward class given by the commission for quite vague reasons.

One of the major functions of the commission was to define the EWS category. The commission had recommended that all BPL families of the general category and such families whose income from all sources is below taxable income should be included in the category of economically weaker sections. However, the government said that since the identification of BPL is subject to debate, the income limit for EWS reservation should be fixed based on the income limit prescribed for OBC reservation.

According to the cabinet note, the Centre has set an income limit of Rs 8 lakh based on the criteria set by an expert committee in 1993 to not grant reservation to the creamy layer among Socially and Economically Backward Classes (SEBCs). It is also the income limit for OBCs at present, though the limit was set keeping in mind social backwardness.

It was accepted in the cabinet note, “In the identification of SEBC, more emphasis is placed on social backwardness but for identification of economically weaker sections only income criteria can be adopted. Therefore, a family which has an income less than Rs 8 lakh can be considered in the EWS category.”

However, no survey or research is mentioned in the cabinet note which can explain the basis on which these criteria have been set.

Cabinet Note EWS Reservation by The Wire on Scribd

However, no specific data has been provided in this regard. According to the cabinet note, “Based on the NSSO survey of 2011-12, an estimate of those spending less than the average per capita monthly expenditure and it has been found that a large number of such people belong not only to the SC, ST, and OBC but the general category as well.”

The note further adds, “Therefore, it would be appropriate that EWS is given at least 10 percent reservation in recruitment and admission in educational institutions.”

As per the note, the government also argues that this constitutional amendment will open more employment opportunities for the economically backward sections of society. However, no data has been given on how many people are expected to benefit from it.

The Wire has sent a list of questions to the office of the secretary of the Ministry of Social Justice and Empowerment and Union minister Thawar Chand Gehlot, as well as the cabinet secretariat. No response has been received so far. The story will be updated as and when a response is received.