New Delhi: The COVID-19 crisis has pushed back many official deadlines with the government accepting that the rigours of social distancing mean compliance with pre-coronavirus timetables is well-nigh impossible. But when it comes to allowing the general public to submit feedback on the Narendra Modi government’s controversial draft Environment Impact Assessment (EIA) notification, environment minister Prakash Javadekar has shot down a proposal by his own officials to extend the deadline till August 10.

Overruling the suggestion moved on file by the ministry’s joint secretary and endorsed by the environment secretary too, Javadekar set June 30, 2020, as the final date for the submission of public feedback to the proposed draft notification, without assigning any specific reason for his decision.

This information has come to light through documents accessed under the Right to Information (RTI) Act, which have been seen by The Wire.

The Union Ministry of Environment, Forest and Climate Change (MoEFCC) put up the draft notification for public consultation on March 23 and it was published in the Gazette of India on April 11. At that time, a 60-day time frame, ending on June 10, was set for the submission of representations by the people.

The proposed draft EIA notification seeks to amend the 2006 notification that made the scrutiny of developmental projects necessary for getting projects cleared. Among the controversial amendments that have been proposed in the draft notification are exempting certain industries from public hearings, requiring industries to submit one instead of two compliance reports annually, and giving clearances for a longer time period to mining projects in environmentally sensitive regions. It is for these reasons that the draft EIA notification has encountered opposition from environmental experts, activists and common people. 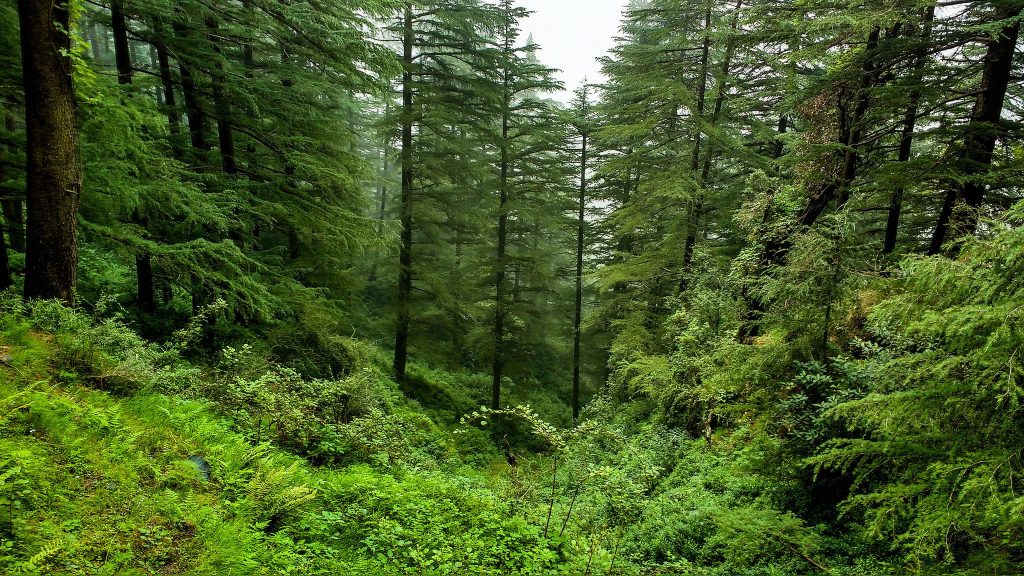 The thousands of responses that made their way to the union environment ministry had one request – in view of the unprecedented situation created by the COVID-19 crisis and the apprehensions regarding the impact of the proposed EIA notification on large sections of the population and the issue of access to natural resources, the ministry should extend the time frame for people to submit their feedback.

Taking cognizance of the issue, in a file noting of April 23, 2020, joint secretary in the Union environment ministry, Geeta Menon, had suggested that September 23, 2020, be set as the final date for the submission of public representations.

Menon wrote, “Numerous representations (over 4000) have been received by the undersigned also. Since the EIA notification and any change thereto is of great significance to the management of environment in the country as a whole and to the matters of access and utilization of natural resources, there is some merit in the request to reconsider the time limit of 60 days that has been provided at present in view of the Corona pandemic.”

Also Read: The Govt is Trying to Make it Easier for Industries to Avoid Environmental Accountability

The joint secretary’s rationale was that there was a precedent for taking such a decision in the ministry. Therefore, in the prevailing circumstances, there was a case for extending the time limit for public submissions.

As the official pointed out in the same noting (April 23, 2020) “It is submitted that recently, in the context of the Draft Battery waste Management Rules which has a much more limited scope, the Ministry has agreed to extend the time frame for receiving feedback. Accordingly, it is suggested that we may extend the time frame to a total of 180 days from the time of issue, i.e., 23 March, 2020.”

The internal documents reveal that the over 4,000 representations that Menon mentioned in the noting were received in the space of just 12 days, between April 11, when the draft notification was published in the Gazette of India, and April 23! In their responses, people had cited the difficult conditions created by the COVID-19 pandemic as a reason for seeking an extension of the time limit.

However, the issue was not looked into immediately. Menon discussed it with additional secretary Ravi Agrawal and it was decided that they would review the matter around May 15. The noting made a couple of hours later, on the same day (April 23) read: “Discussed with As (RA). As advised by him, we can review this matter around 15 of May.”

Meanwhile, the then environment secretary, C.K. Mishra dismissed Menon’s suggestion, saying that a time limit of 120 days – not 180 days – be set from the date on which the draft notification was issued.

A file noting of May 4, 2020, by scientist ‘C’, J.D. Marcus Knight says, “The matter was discussed with Dir (SKP) [Sharath Kumar Pallerla] and it was informed that based on the comments received (copies attached in correspondence file, the Secretary, MoEFCC has instructed that the notice period for the draft EIA notification 2020 may be extended for a further period of 60 days. “

“As advised”, Knight prepared a draft notification for an extension. The file was moved to the joint secretary to be submitted for the approval of the minister.

In her file noting (May 4), Menon wrote, “In response to the Draft EIA notification put up for public consultation, a large number of responses requesting for the Notification to be withdrawn/kept on hold/ extend the time frame for submission of feedback, etc., have been received. Accordingly, as directed, a draft communicating extension of time for feedback by a further period of 60 days from the date of publication in the Gazette i.e 11th April 2020 till 10th August 2020 is placed alongside for approval.”  Both additional secretary Agrawal and environment secretary Mishra concurred with Menon. 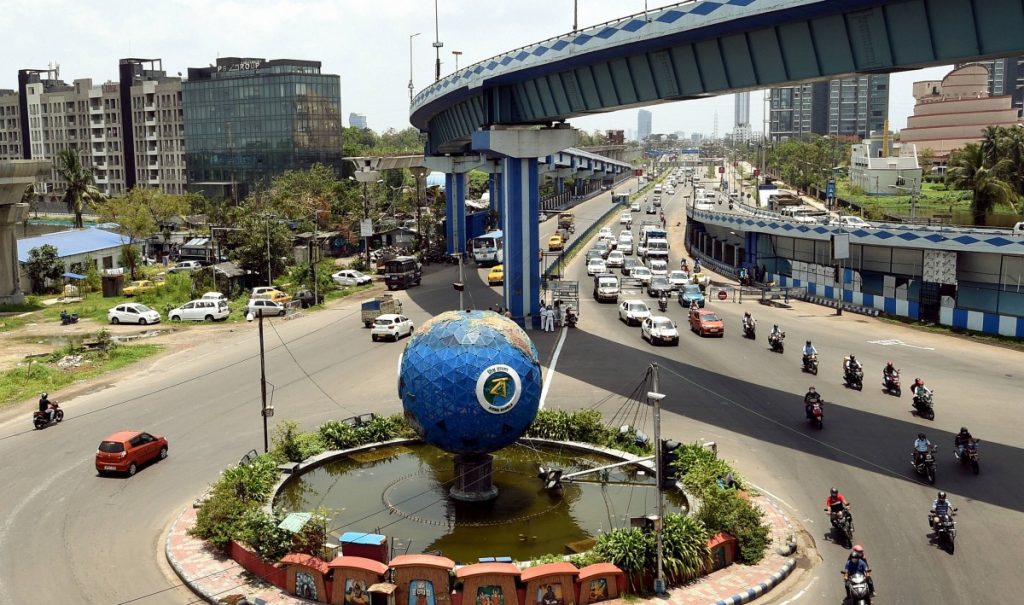 Many activists and common people sought an extension because of the COVID-19 lockdown. Photo: PTI

However, when the file reached Union environment minister Javadekar, he dismissed the proposed extension of the time limit, giving June 30 as the final date.

The documents received under the RTI Act show very clearly that over his signature, dated May 5, 2020, Javadekar wrote the date, June 30, 2020. He gave no reason for his decision. 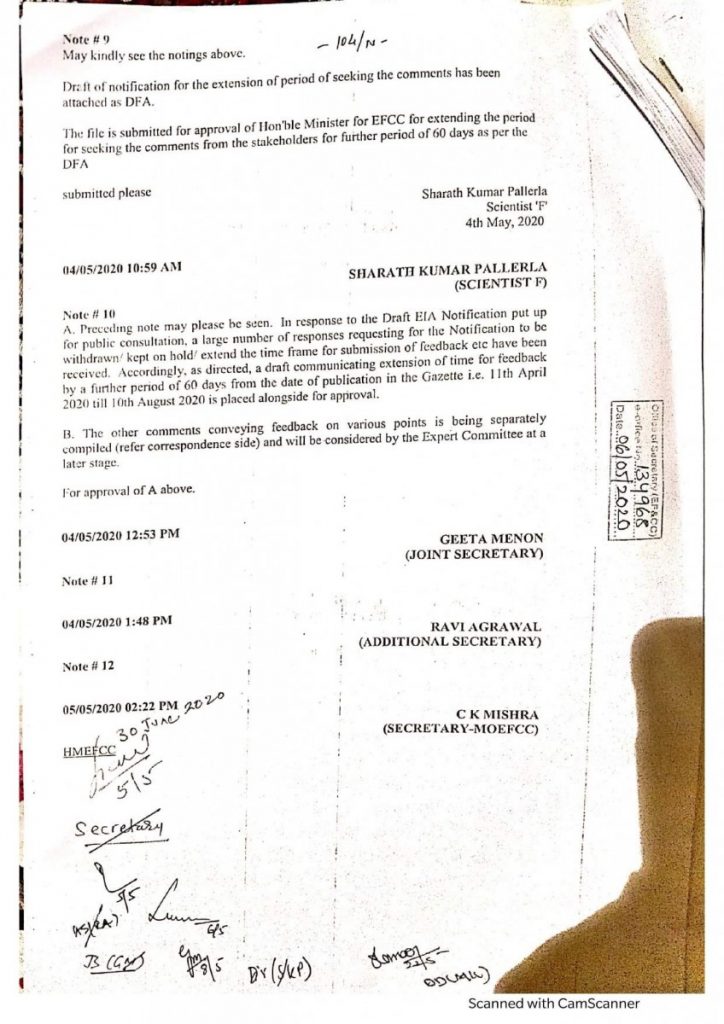 Subsequently, the environment ministry issued a new notification on May 8 which stated that the final date for sending in comments was June 30.

The minister’s decision has angered environmental activists who have demanded that the Centre extend the time limit for feedback.

Environmental activist Vikrant Tongad, who accessed these internal documents under the RTI Act, said that if the Centre does not take a decision to extend the time limit in the coming days, he will knock on the doors of the Delhi high court.

A resident of Greater Noida, Tongad said, “This is an attempt to take advantage of people’s helplessness. During the lockdown, when the postal service was not working and people were confined to their homes, the union government brought in the EIA notification hastily. Now people are not being given an opportunity to give their views on it, considering it is going to impact the entire country.”

Tongad was of the view that it would be much better if the Centre were to withdraw the draft EIA notification immediately in the interests of strengthening environmental regulation.

The Wire has written to Union environment minister Javadekar seeking his comment on the story and the logic behind his decision. The report will be updated as and when he responds.