Seven Trips, Five Documents and a Rejection: The Nightmare for a Domicile Certificate

What should've been a formality to get a concession for cancer treatment foreshadowed how difficult it may be for poor Indians to 'prove' their citizenship. 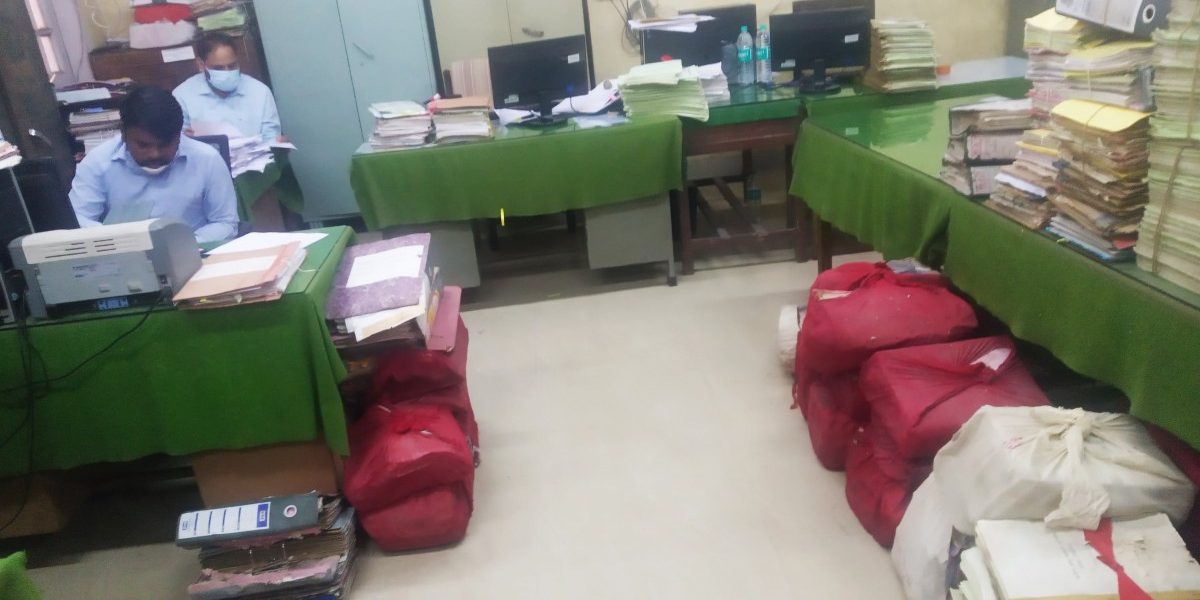 Inside the ward office of Walkeshwar, the third of four offices we had to visit. Photo: Kobad Gandhy. 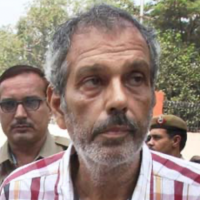 On December 30, 2021, the doctor in the dental department of Tata Memorial Centre in Parel, Mumbai suggested procedures to patient Pati Yadav which would cost over Rs 1 lakh. As he was poor, the doctor suggested getting a domicile certificate as he has been staying here since 1984, working as a driver. The doctor said that if he did so, the cost would be free as the hospital would be able to raise the money. Though his Aadhaar card was taken from his home village in Jharkhand, his driving licence was from 1984. As his employers would also give a certificate that Yadav was employed with them for over 20 years, the doctor felt there should be no problem in getting the domicile certificate.

But then began the nightmare of umpteen trips all the way to Old Customs House, being thrown from one office to the next and finally rejected. As a social worker, I tried to help out as Yadav belonged to a village and did not have the confidence to deal with the authorities in a city like Mumbai.

We went to the Old Customs House, in Fort, about 20 km from where I stay and he works, to start the procedure. On the first trip, we had to pay Rs 10 to purchase a form that I filled out. After waiting in a queue for about half an hour, the person at the counter mentioned a whole lot of documents that had to accompany it.

So we returned empty-handed. After that, Yadav got his ration card, the electricity bill of the ‘house’ owner of the jhopadpatti where he lived at Walkeshwar, a copy of his Aadhaar card (which had the date of birth on it) and also, of course, the copy of the driving licence since 1984.

On the second visit to Old Customs House, there was a long queue. After an hour’s wait, the girl at the counter accepted the documents after going through them and said that it would take a week to process. I requested it to be hurried up as he was a cancer patient and required a surgical process at the earliest. She, Sneha, said she will try and do it in four days and asked me to ring the number put outside to confirm if it is ready. When I rang after a week, they said we would have to come in person to confirm, they do not do so on the phone. Why is the number prominently displayed, I don’t know.

Anyhow, on the third visit, the queue was even longer at the adjoining window where everyone was waiting to show their pavti (coupon) which had a number on it (ours was 455). When we finally reached the window after one-and-a-half-hours, the person at the computer could not find it recorded in their computer. Then he searched for it in the big dump of files and still could not trace it. Then there was a separate dump of rejected files and neither was it there. In the end, as I told him the person involved was a cancer patient and needed it urgently, he said to come after a week and he will definitely process it and immediately give it. He also made a separate record of the number on the coupon and the name of the applicant. 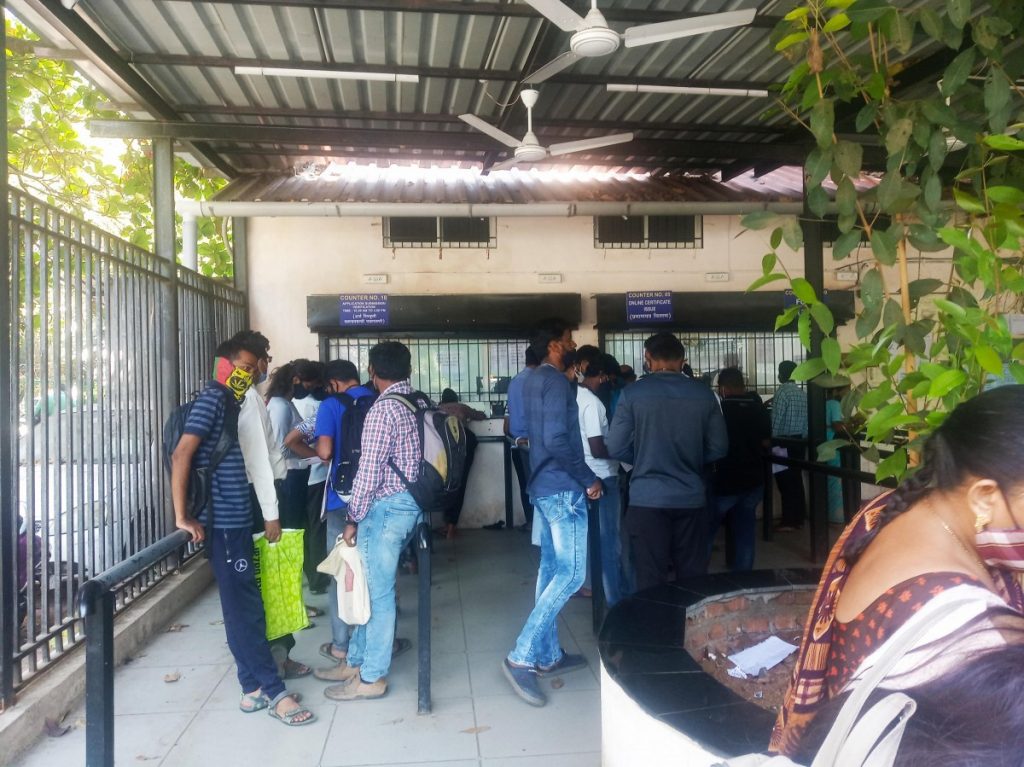 The queue outside the window at which we had to show the coupon. Photo: Kobad Gandhy.

After a week when we went back on our 4th visit and another one-and-a-half hours in the queue, the person at the counter could not remember our case and again searched high and low but could not find either the physical file nor the scanned copy on the computer. He then told us to go to the office where domicile and other certificates are processed, also on the ground floor, and speak to one Geeta madam.

By then, it was lunch break. We had to wait for 30 minutes before she made herself available. After the lunch break, she too spent over an hour searching but could not find it, either on her computer or physically. She then contacted her boss who was shown the 455 number coupon. He too began looking for it and after standing around in the office for over an hour, he said to wait outside. That I was a senior citizen with a walking stick made little difference to them, nor did the fact that I had been standing there for about 2 hours.

After a further half an hour, he came out and said he wanted to see the hospital file which we showed him, which asked for a domicile certificate. Then he asked us to wait and they will get it done. By about 3:30 pm (we had reached OCH at 11:30 am), Geeta madam called us in and mysteriously all the documents we had submitted were on the computer. After spending another half an hour looking at the documents, she said that she needs a “renunciation affidavit” from the court that says he no longer lives in Jharkhand but lived at Walkeshwar in Mumbai (giving the address). As it was already 4 pm I rushed to the court near St Xaviers College and after paying Rs 500, got the affidavit and gave it to Geeta. It was now 5 pm and I thought that we would be given the domicile as the office was satisfied with all the documents submitted, which included a statement from the employer that Yadav had been working with the society for over 20 years.

It was past 5 pm when Geeta finally gave the form. I was relieved as I thought it was worth the 5-hour wait and rushing around to finally get it. But I was astounded to see it was not the certificate but merely an official form for the application for the domicile certificate. When I asked her she said it was a formality to come once more and go to the office of the respective ward of his residence and meet Kirti madam. It was the ward that deals with the Walkeshwar area and she will give the domicile certificate as she had okayed everything.

Then Yadav organised the electricity bills of 20 years back (most people would not have it) and a current one as also the rent receipts over 20 years.

Then we once again made the 6th trip to the OCH. Kirti madam then said it was all OK and said to collect the domicile certificate from one Abhijit Ghode on the third floor – the fourth office we had to go to – as she does not issue it. When we went up and showed the application to the officer, he said that the person who does the work was on leave so to come after 2-3 days and collect it. 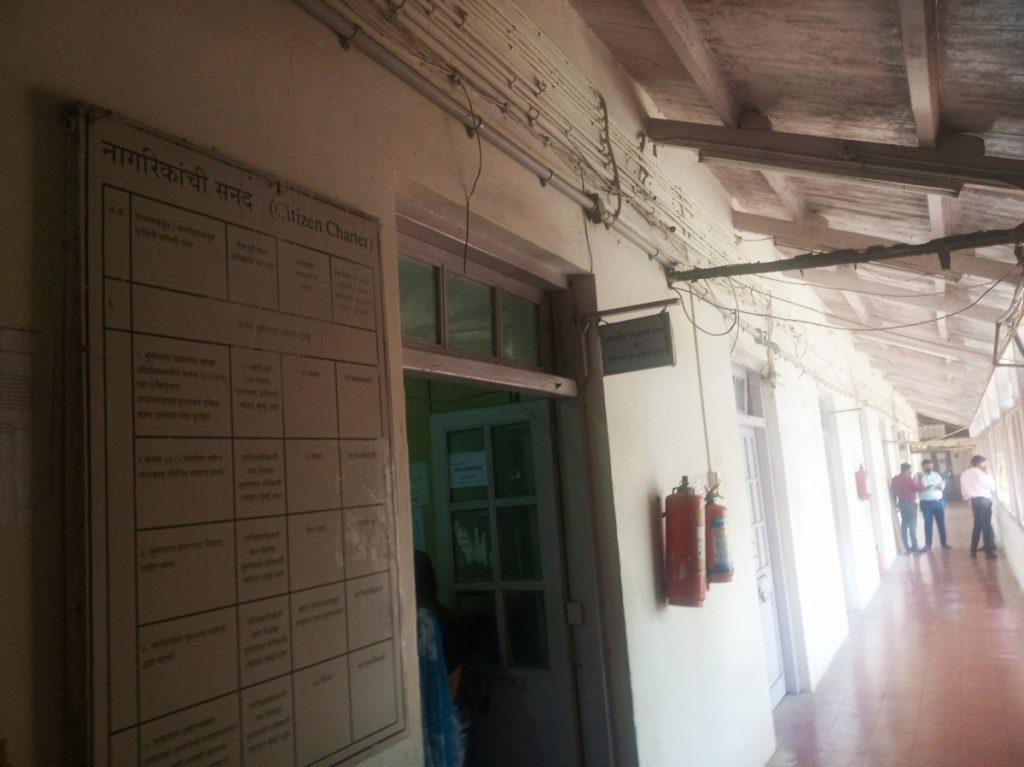 After a week when Yadav went to collect it, he informed me that the officer told him that it had been rejected. Thinking that this was not possible, and he had probably misunderstood, I went with him – the 7th trip to the OCH – and when I spoke to the officer he said that it has been rejected as there was no birth certificate. But I explained at all the earlier three stages they had accepted the birth mentioned on the Aadhaar card, then why now are they rejecting it? He said rules are rules. Then I told him if that was essential why were we made to do seven trips with the assurance that it would be given; it should have been rejected on the first day itself. And why were we forced to make an affidavit at a cost of Rs 500? His answer was, “You ask them!”

When I went to the offices on the ground floor and asked them, they said, “What can we, do we passed it.”

So, after spending several hours on each of the seven trips at the OCH and over Rs 200 each time in travelling there and back, we find the domicile rejected, in spite of providing all the evidence and it being accepted by two of the offices!

This domicile was required for a concession on a cancer operation, but it is also the same certificate to prove one’s citizenship. If this was rejected after providing all the evidence of driving licence since 1984 from Mumbai, Aadhaar card, electricity bill and rent receipts, as also a certificate from the employer saying he has been working in Mumbai for over 20 years, etc what would be the status of other poor people? One could just wonder what would happen to those being asked to get a domicile to prove their citizenry, especially if they were poor!

Should not action be taken against the authorities involved for the harassment and refusal to give it, in spite of it being passed by the lower offices?