Discharge From New Bio-Toilets on Indian Trains No Better Than Raw Sewage: Study

Despite sanitation experts and studies pointing out that a majority of these toilets are ineffective or ill maintained, an approximate Rs 1,200 crore has been allocated for fitting additional coaches with bio-toilets. 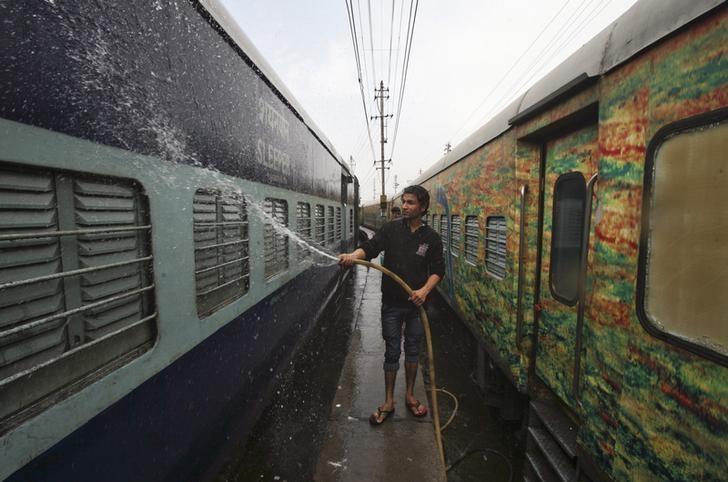 A worker cleans a stationed train at a railway station in Jammu February 26, 2015. REUTERS/Mukesh Gupta/Files A new kind of toilet using bacteria to break down human excreta has been deployed in Indian trains over the last four years at a cost of Rs 1,305 crore, but this toilet is no better than a septic tank, the Indian Institute of Technology, Madras, has concluded after a two-year long study.

As many as 93,537 “bio-digesters” – as the toilets are called – have been installed in mainline express and mail trains by the Indian Railways. These are small-scale sewage-treatment systems beneath the toilet seat: Bacteria in a compost chamber digest human excreta, leaving behind water and methane. Only the water, disinfected later, is let out on the tracks.

That is how it is supposed to work.

However, sanitation experts and various studies – including commissioned by the railways – have pointed out that most of the new “bio-toilets” on Indian trains are ineffective or ill maintained and the water discharged no better than raw sewage.

“Our tests have found that the organic matter (human waste) collecting in the bio-digesters do not undergo any kind of treatment,” IIT professor Ligy Philip, who headed the latest study, told IndiaSpend. “Like in the septic tanks, these bio-digesters accumulate slush (human excreta mixed with water).”

The IIT study on bio-toilets, shared exclusively with IndiaSpend, was sponsored by the Bill and Melinda Gates Foundation and submitted last week to the Union ministry of urban affairs.

Despite the criticism, an additional 120,000 coaches are to be fitted with these bio-toilets, jointly developed by the Defence Research and Development Organisation (DRDO) and the Indian Railways, by December 2018. This is likely to cost Rs 1,200 crore, the railways revealed on November 2, 2017, in response to a Right to Information (RTI) request.

The bio-digester project in the Indian Railways began during the previous United Progressive Alliance (UPA) regime. But the project has been speeded up under Prime Minister Narendra Modi’s Swachh Bharat (Clean India) campaign. The idea is to meet this target in time for the celebration of Mahatma Gandhi’s 150th birth anniversary in 2019, said railway ministry spokesperson Anil Kumar Saxena. The Swachh Bharat campaign has been dedicated by PM Modi to Gandhi.

Indian Railways are often described as the world’s biggest toilet: It ejects around 3,980 tonnes of faecal matter – the equivalent of 497 truck-loads (at eight tonnes per truck) – onto rail tracks every day, according to a report released by the Comptroller and Auditor General (CAG) in 2013.

The network has 9,000 passenger trains with 52,000 coaches with toilets that discharge human waste on to rail tracks. Covering 65,500 km across the country, these trains transport 24 million passengers every day, the equivalent of the population of Australia.

Since 1993, the Indian Railways have been experimenting with a host of technologies used worldwide to replace the open discharge system. This included vacuum toilets based on suction, commonly seen in aircraft; “controlled-discharge” toilet systems (CDTS) which allow waste to be dropped only after a train acquires a speed of 30 kmph, thus keeping stations clean; and “zero-discharge” toilets, in which solid waste is stored, evacuated and then dumped in pits for composting and the liquid filtered for recycling.

In 2008, the railways decided to install the bio-digester model developed by the Gwalior-based Defence Research and Development Establishment (DRDE).

Responding to the criticism of the bio-toilet, government officials said that the flaws are being fixed. “The issues regarding the bio-digesters are of a minor nature and are being effectively addressed. Some changes (in design or execution strategies) are inevitable, as this is a continuous process,” said Saxena, the railway ministry spokesman.

Currently, there are nine units manufacturing these bio-toilets.

Lokendra Singh, former director of the DRDE, had, after an expedition to Antarctica, brought home psychrophilic bacteria that can survive in extremely low temperatures. The bacteria were mixed with cow dung and normal soil, which have methogens (microorganisms that produce methane) capable of breaking down human excreta. This was then supplied to the manufacturers of rail bio-digesters.

“Because of the presence of a compound of bacteria, the bio-degradation process is set off in the toilet chambers – the bacteria eat up the organic matter (human excreta) and produce methane gas and water as byproducts,” Singh said.

The Indian Railways have also been toying with the idea of setting up two factories to mass produce this bacterium.

But Singh’s claims of a scientific breakthrough using the bacteria from Antarctica have been questioned on the following grounds:

This is not the first time the railways’ bio toilet project has been criticised. A 2009 study jointly conducted by the Lucknow-based Research Designs and Standards Organisation (RDSO) and IIT Kanpur concluded that no treatment of human excreta was happening in the bio-digesters installed in railway toilets.

“We had found the discharge from these toilets as being no different from raw sewage,” said IIT professor Vinod Tare, who had headed the study, which the railway ministry has not made public.

Sulabh International founder Bindeshwar Pathak – who had earlier been named the brand ambassador of the railways’ cleanliness mission – has also expressed serious reservations about the effectiveness of the “Antarctica bacteria” at a meeting with railway board officials in January 2016.

“I had recommended the use of removable steel tanks in train toilets and the installation of biogas digesters at the junctions,” Pathak said.

The bio-toilets had “more than 100% chance of getting choked”, said M. Raghaviah, general secretary of the National Federation of Indian Railways, in an August 2015 letter sent to the Railway Board. “The carriage and wagons staff is routinely facing the inconvenience of cleaning up the choked tanks,” he said.

The DRDO bio-digesters were first installed at Siachen glacier in 2000 and subsequently at the 2013 Kumbh Mela, the massive Hindu festival that marks a solar eclipse, in Allahabad. Recent news reports (such as this report in the New Indian Express) have pointed out that bio-toilets are malfunctioning in trains.

Singh rejected these allegations. “Frustrated scientists who have never worked on the project are raising such issues,” he said. “Of course, there are some problems but these are being addressed by the railways. Bio-digester manufacturers do not have previous experience. So, some problems are emerging but issues will shortly get sorted out.”

Singh, who has assumed charge as the chairman of the Digesters and Bio-Toilet Manufacturers Association (DBMA) after his retirement from DRDE this year, said questions of “conflict of interest” did not apply in his case, as he held only an “honorary position with the DBMA”.

Incumbent DRDE director D.K. Dubey refused to comment in the matter and a questionnaire emailed to him remained unanswered until the time of writing. D.V. Kamboj, project in-charge at DRDE, said he was not authorised to speak to the media.

Documents available with IndiaSpend suggest that there are serious issues with the bio-toilet venture. At a high-level meeting convened by the railway board on October 26, 2017, with functionaries from 17 zones, the following concerns were emphasised:

An internal review of bio digesters conducted for September 2017 on five divisions of the Northern Railway Zone indicated 10% failures on account of internal choking in the Delhi division of Northern Railways; 15.7% cases of clutch wire failures and 19.4% failures of lab samples testing.

In this period, the cost of manufacture and fitment of bio-toilets climbed from an average of Rs 52,000 per unit to over Rs 75,000 per unit. After the imposition of the Goods and Services Tax (GST), this cost burden has spiked further, with the railways having to absorb the 18% levy.

“Cost escalation is inevitable, as manufacturing costs have been rising,” said Manoj Jha of Faridabad-based Arkin Technologies that manufactures and supplies bio-digesters to the railways.

In response to an RTI appeal from Dehradun-based activist Prabhu Dandriyal, the railways stated that the Hubli workshop of South Western Railways had been supplied 2,152 toilets at a cost of over Rs 22 crore during the financial year 2016-17. Based on this calculation, the current cost being borne by the railways works out to more than Rs 100,000 per unit.

By the time the task is completed, the railways are likely to exceed their budget of Rs 1,200 crore for additional bio-toilets. Arvind Dethe, a bio-toilet manufacturer based in Akola in Maharashtra, has been selling a similar toilet at Rs 6,000.

“Everybody engaged with the plan is aware that the current bio-digester plan is unlikely to achieve the goal of providing an environment-friendly and sustainable solution,” a railway official said, requesting anonymity because he is not authorised to speak to the media. “But officials are keeping quiet on account of pressure from the political leadership to fulfill the targets.”

As many as 95% of the bio-toilets fitted so far were faulty, claimed another official posted in the carriage and wagon department who did not wish to be named. His department is responsible for the maintenance of toilets.

DRDO scientist Ashok Babu, in his email of May 21, 2016, to then defence minister Manohar Parrikar, rubbished official claims about the bio-toilets, alleging that these were nothing but “gobar gas plants”.

“With basic training, a village mason can build such toilets,” he alleged. “The plan is being pushed by a nexus of officials and vendors.”

The railways have spent Rs 22 lakh on the repair of “faulty” bio-toilets in the Southern Railway zone alone, according to an October 10, 2017, RTI reply to Dandriyal, the Dehradun-based activist.

“Funds are not so much a constraint; but a bigger problem is that – on account of the business interests of the railways to run more and more trains – it becomes difficult to spare coaches for repair work,” said a railway ministry official who did not wish to be named. “Coaches with faulty toilets need to be marked ‘sick’ and moved to the nearest of the 29 workshops of the Indian Railways for repair. But the time and luxury for such things is not easily available with the Indian Railways.”

Confronting “irresolvable issues” on the non-functioning of the DRDO toilets, the Indian Railways have begun exploring other options including the procurement of the vacuum toilets commonly used in aircraft or trains in western countries.

The Chennai-based Integral Coach Factory (ICF) has already floated a global tender to acquire vacuum toilets. “To begin with, these will be fitted in premier trains including the Rajdhani, Shatabdi and the Durontos,” a ministry official said.

Singh said that the idea was to develop “hybrid toilets” by fitting vacuum toilets atop the bio-digesters already installed. “Subsequently, lavatories will mainly have vacuum toilets, with just one big bio-digester installed in half portion of the guard’s cabin at the end of the train,” the official said.

This policy U-turn means not only that has time and money invested in the bio-digesters has been wasted but also that the railways will now need to pump in more funds to execute its green toilets plan.