Sex workers’ organisations are apprehensive that the Bill criminalises prostitution without preparing a roadmap for rehabilitation, leave alone the cases of those who want to be in the profession of their own volition. 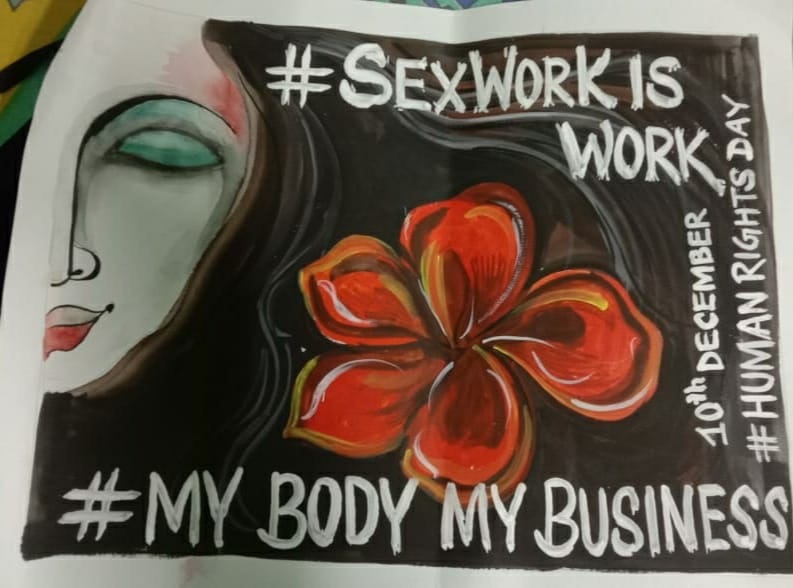 An illustration uploaded by AINSW on their Twitter page. Photo: Twitter/@AINSW_INDIA

Kolkata: The Centre on Monday, July 12, listed the new anti-trafficking Bill, formally the Trafficking of Persons (Prevention, Protection and Rehabilitation) Bill, 2021, for introduction, consideration and passing during the coming session of the Lok Sabha that is scheduled to commence between July 19 and August 13.

This has come as a shock to several organisations of sex workers because the listing came just a day after organisations from 17 states signed a petition to the Ministry of Women and Child Development, urging the government to allow the public more time to comment on its provisions.

The ministry had on June 30 uploaded the draft bill and invited comments from all stakeholders by July 14. Organisations of sex workers strongly protested the government’s move to allow only two weeks for assessing various provisions of the 38-page document and discuss it with sex workers, who are likely to be affected by provisions of this Bill.

Following the Lok Sabha’s listing of business of Monday, the All India Network of Sex Workers (AINSW) sent another letter to the ministry to register their protest against the government’s plan to go ahead with the Bill without considering the opinion of the stakeholders.

“To our utter shock, the Lok Sabha Bulletin Part II published on 12.07.2021, lists the ‘Trafficking in Persons (Prevention, Care and Rehabilitation) Bill, 2021’ in the ‘Tentative List of Government Legislative and Financial Business expected to be taken up during the Sixth Session of Seventeenth Lok Sabha’ for ‘introduction, consideration and passing’. This gives the impression that the anti-trafficking Bill has been finalised and cleared for introduction in Parliament, even before stakeholders have had the opportunity to make comments and suggestions on the same,” the AINSW, which is an umbrella of organisations of sex workers from 17 states, wrote in a letter to the ministry on Tuesday.

The letter said that they were “pained to note” that the ministry inviting comments and suggestions on the draft anti-trafficking Bill was “nothing  but eyewash” and that “the Ministry has no real intention of considering, let alone accepting, any views and suggestions given by stakeholders on the Bill.”

The letter also referred to a government of India directive from the ministry of law and justice, dated February 5, 2014, which makes every draft legislation required to be placed in the public domain for a minimum period of 30 days.

The listing describes the Bill as one that “proposes to prevent and combat trafficking in persons, especially women and children, to provide for care, protection, assistance and rehabilitation to the victims, while respecting their rights, and creating a supportive legal, economic and social environment for them, and also to ensure prosecution of offenders, and for matters connected therewith or incidental thereto.”

However, sex workers’ organisations are apprehensive that the Bill criminalises prostitution without preparing a roadmap for rehabilitation, leave alone the cases of those who want to be in the profession of their own volition.

“On Sunday, we wrote to the ministry explaining why more time was required for submitting our opinion and that two weeks was too short a period for discussion on a Bill dealing with many complex and sensitive issues. While we are yet to get a response to our letter, the Centre moved ahead with listing it for passage in the coming session. This is gross injustice with the community on which the Bill is going to have a deep impact,” AINSW national programme coordinator Amit Kumar said.

The ministry of law and justice directive that sex workers’ organisations referred to lists the decisions taken in the meeting of the Committee of Secretaries (CoS) held on January 10, 2014 under the chairmanship of the cabinet secretary on the pre-legislative consultation policy. It was a time when the UPA II government was still in power.

One of the decisions said, “The department/ministry concerned should publish/place in public domain the draft legislation or at least the information that may inter alia include brief justification for such legislation, essential elements of the proposed legislation, its broad financial implications, and an estimated assessment of the impact of such legislation on environment, fundamental rights, lives and livelihoods of the concerned/affected people, etc.” and that such details “may be kept in the public domain for a minimum period of thirty days for being proactively shared with the public.”

Another decision reads, “Where such legislation affect specific group of people, it may be documented and disclosed through print or electronic media or in such other manner, as may be considered necessary to give wider publicity to reach the affected people.”