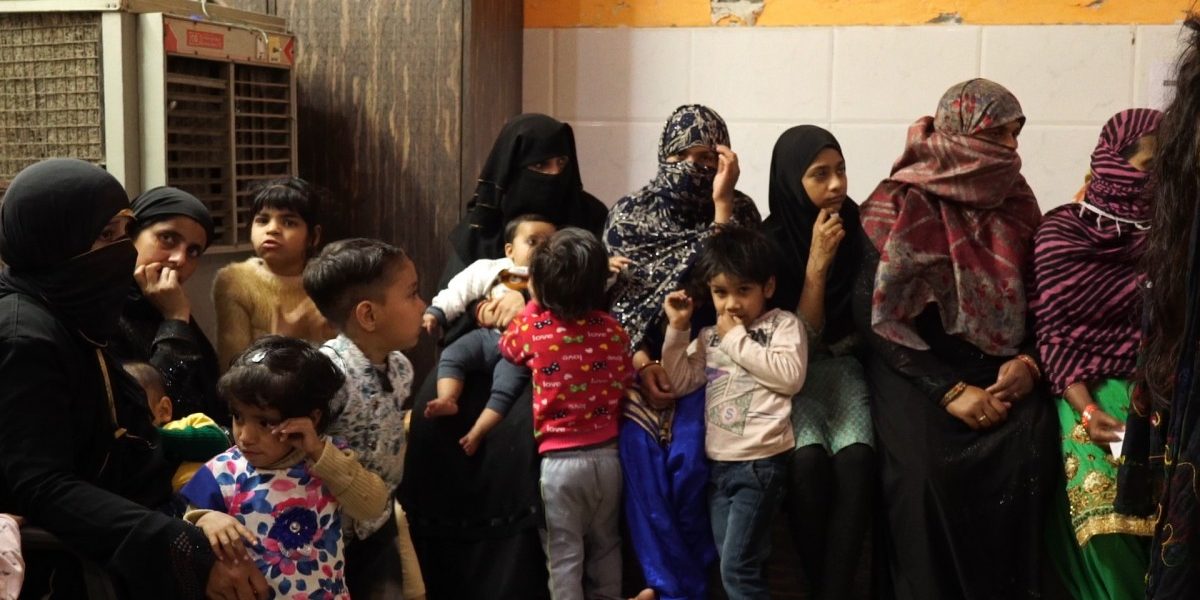 New Delhi: On hearing that a legal camp has been set up in Lane No. 5 of Chaman Park in Mustafabad area by the Citizens Collective for Peace, a group of individuals and civil society organisations, Rukhsana had immediately set off for it.

A resident of Bapu Nagar, which was one of the many colonies to witness large scale arson and violence over three days beginning February 24, she was among the lucky ones who escaped with injury or loss of property. But she lost her livelihood as the families she worked for as a domestic help had to flee the area.

“Now I am not getting work. I also do not have an ‘aadmi’ (husband), I am a widow. If you can do something for me, please do. I have not received any assistance from the government. My children are young. I just need ration for a few months and some clothes,” she said to The Wire as she emerged from inside the legal camp being run by “Lawyers for Detainees”.

While the large number of lawyers and law students at the camp have already helped over 400 people get their FIRs registered, file police complaints and compensation forms, there is little they can do in Rukhsana’s case as no Delhi government compensation scheme covers women like her who have lost their source of livelihood in the violence.

That apart, the camp set up in a lane of Chaman Park on Brijpuri road has been doing yeoman’s service for those affected by the violence.

As lawyer Nilesh Jain pointed out, this is the eighth such camp that has been organised since violence erupted. “The group came together on February 25 to provide relief to victims of violence. We have lawyers and law students who are filling the compensation forms and drafting complaints to be filed at police stations. Then we also accompany the complainants to the police stations wherever they so desire.” 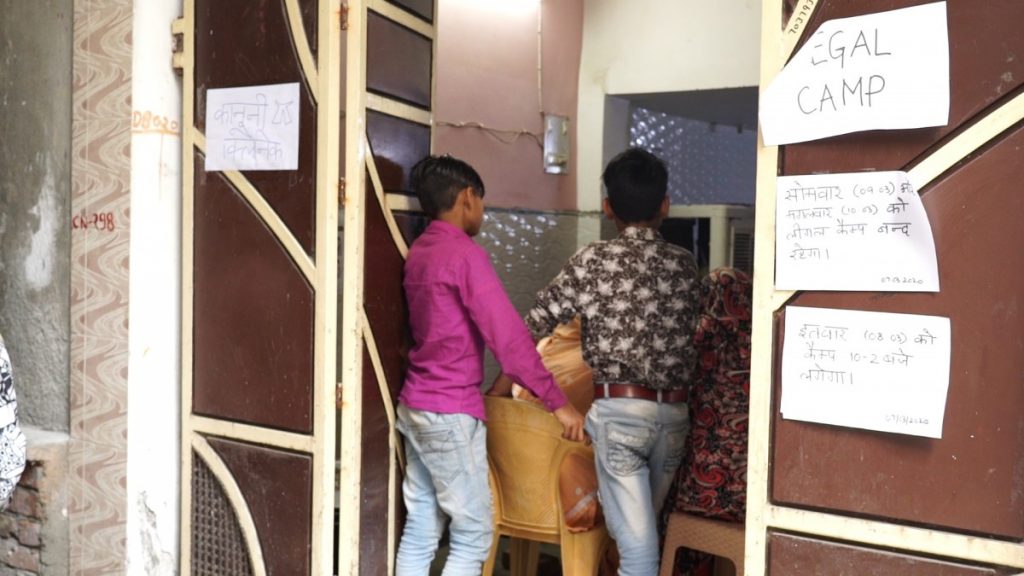 Such cases are many as following the violence many from the minority community are even afraid to approach the police.

He pointed out how problems remain with the system of filing complaints or while applying for compensation. “No token number was earlier issued for compensation claims and so people found it difficult to follow up on their status. Initially SDM office had no system in place, but later they began sending SMS with a reference number to the complainants.”

Also, he said, while initially claims were not being received without daily diary (DD) numbers issued by police for a complaint or FIR, later they began accepting forms with Aadhaar numbers.

As for the police, he said, “The main problem is that some police stations are not cooperating and not providing FIR numbers or copies of FIR.”

Jain said the major issue before the Lawyers for Detainees group now is finding the status of people being picked up for questioning or interrogation in connection with the FIRs that have been registered. 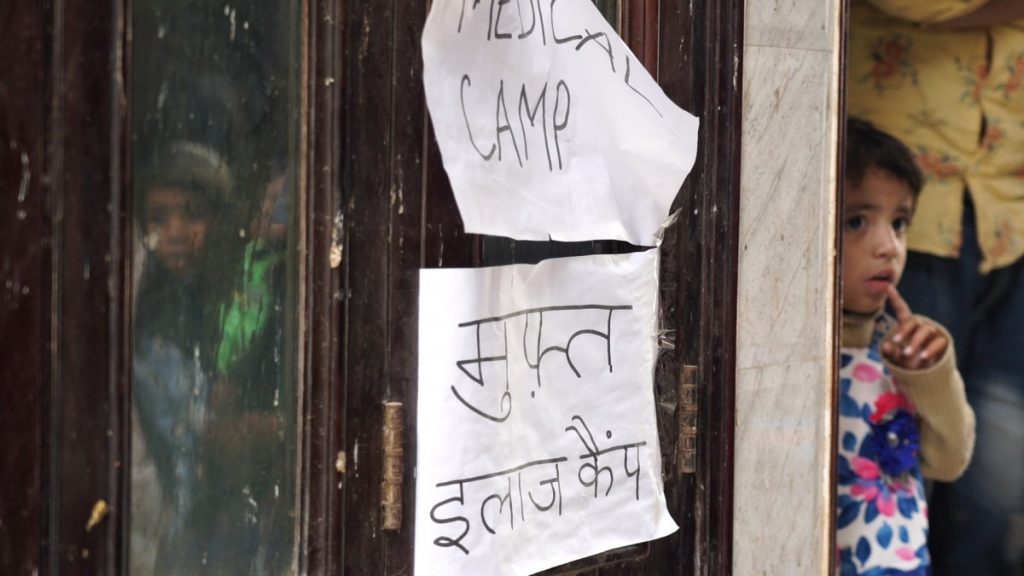 A child at a medical camp in north east Delhi. Photo: Pawanjot Kaur

“People in the area are now getting calls from police stations asking them to be present at the police station. Or they are just being picked up from their houses and shops.”

He said lawyers can only ask the police about the detentions and not do anything more. But if it is a minor that they have picked, then we ask them with authority to release them immediately without any delay.”

Lawyers to work pro bono for those charged with violence

Stating that the police is required to produce whoever they intend to arrest within 24 hours of the start of their detention, Jain said incidents of violations of the norm were many. “We have over 100 complaints of people being detained for long durations. In many cases, the families were not told that their members have been arrested and produced in court. Whenever we come to know we appear in court, file a ‘vakalatnama’ (affidavit) and apply for bail.”

On the future course of action, he said, “When we will have details of FIRs, we will make bunches of five to 10 cases and approach and request the law chambers to provide pro bono legal help to these people. Around 30 law chambers have asked us to share such cases with them.”

Yash, an English student from the United States, who is working with Lawyers for Detainees, said, “The first problem lies with the Delhi police not registering FIRs and SDMs saying FIRs are needed for compensation claims”. 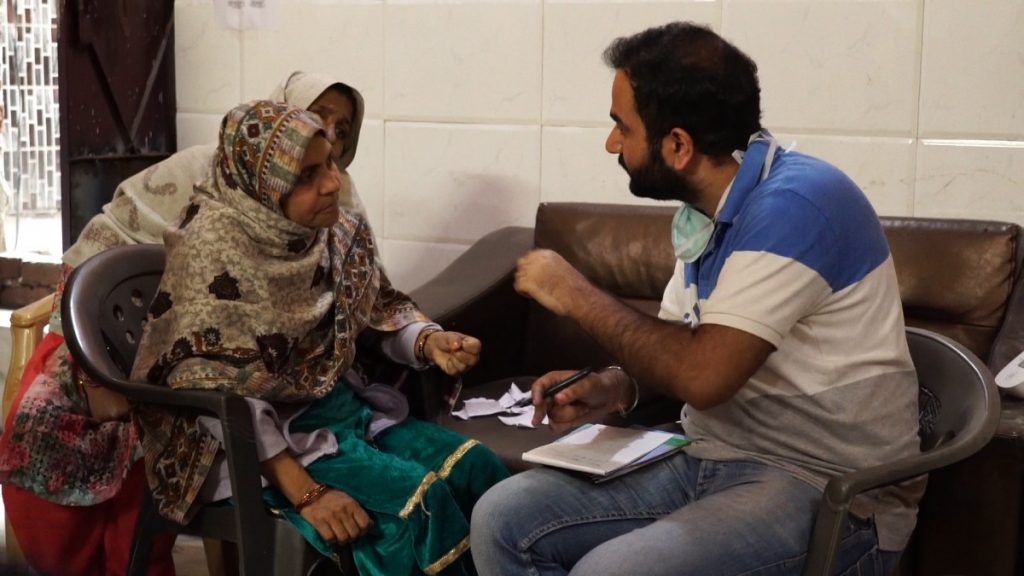 Then, he noted that “among SDMs there are no standardised requirements on which forms they need before they can release the compensation. The SDM offices are also shut early some days, are not open or accessible to people on others. In some cases, SDMs have been going around collecting forms. But the onus is on the complainants to go to SDM offices and constantly follow up on their cases.”

On the role of the government, he said it should ideally provide people with status of their claims or complaints. “As the government it is your job to ensure that across the board people are given access to these resources, which has been a failure on part of this government.”

Yash said people whose identity documents have been lost or stolen in the violence are also concerned about “what they would do in the wake of an NRC or an NPR. Leaving aside the fact that the government is saying that Aadhaar won’t count as a verified documentation proof in the NRC anyway, people are of course worried that now they have no proof whatsoever.”

Getting these documents remade is a separate procedure outside of compensation forms that they must undertake so that they get their identities back, he added.

At the medical camp being run in the same lane, Kaifi from the Hosla team, who is looking after the inventory and pharmacy, said the group had set up four such camps at different places in Karawal Nagar and Mustafabad. “This camp has been running for the last 10-12 days,” he added. On the role, the camp played, Kaifi said: “In the beginning we sent people to the hospitals. We made a team to solve the problems of people in the government hospitals. Initially, a lot of people with minor injuries used to come and we were dealing with around 450 cases daily in the OPD. Now that has come down to around 250. We also had around 20 volunteers and 5-10 doctors in the beginning. Now we have around five doctors.”

He said the idea behind the camp was to provide first aid and counselling to the victims of violence and later on to address all their primary medical needs and provide them with free medicines. “People who got hurt while running away or were hit by lathis or sustained minor injuries came here. We provided them first aid here so that they do not have to go to government hospitals which were already overcrowded.”

‘Many women sustained minor injuries as they fled violence’

With a large number of women in burqas queued up outside, Kaifi said there were several reasons behind women turning up in large numbers. “Many of them fled for safety when violence began and sustained minor injuries. We have general physicians as also a psycho-social team here which is speaking to these women as also the children who were traumatised by the violence.”

Kaifi said the camp, which faced trouble in procuring medicines in the earlier days, was now providing 90% of medicines to those visiting it.

On the role of the Delhi government in providing health care to the victims, the volunteer said, “The government provisions are lacking. There is no mohalla clinic nearby. Medical facilities are not available in the vicinity. We did not see any health vans or camps in this area.”

About a kilometre away from Chaman Park, the relief camp set up at Eidgah in Mustafabad too has several agencies and NGOs providing legal and medical assistance to the victims.

The camp was set up by Delhi Wakf Board and is now housing nearly 1,200 displaced persons, including around 800 women and children. One of its lawyers, Syed Haider Ali, said those living at the camp are being provided with folding beds, mattresses, food, medicines, and proper toilet and bathing facilities. He said around 140-150 Hindus were also residing in this relief camp.

A number of lawyers from Delhi Wakf Board and Delhi Legal Services Authority are running legal camps at Eidgah. Ali said the lawyers from his group accompany victims to the police station. He charged that though the police too has set up a help desk at the camp to receive complaints, it was “still not cooperating fully” in registering FIRs or disclosing details about members of the minority community being detained or arrested for the violence.

“This is a big concern. A number of people came from Shiv Vihar have come here and stated that people have picked up their children. One community is being targeted. Without giving any reason, the police is detaining its members,” said Ali, adding that in the vicinity of the camp too a police team had descended a couple of days ago at 2 in the night and detained several people. 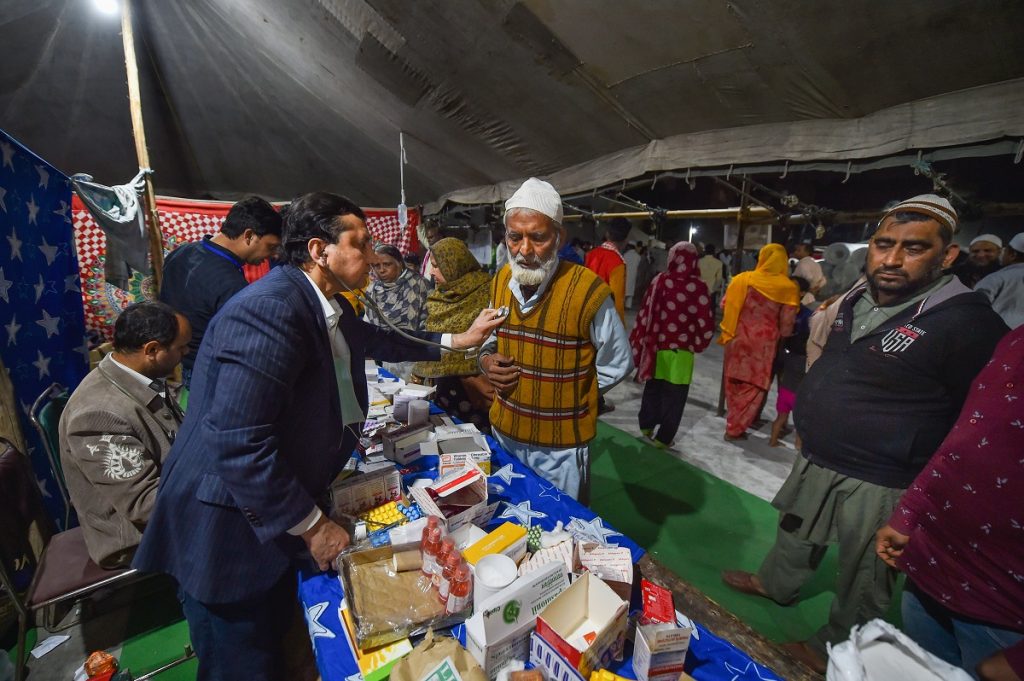 Aadhaar cards now being made at camp

Ali, however, added that to prepare new Aadhaar cards for people who may have lost their original in the violence, a machine has been brought to the camp through which new cards are being made and distributed.

The lawyer said the camp has been organised by Delhi Wakf Board chairman and AAP MLA Amanatullah Khan. “He has already released Rs 50 lakh for the victims. As such Delhi government is contributing indirectly.”

However, he lamented that Delhi chief minister Arvind Kejriwal has still not visited the camp even though his deputy Manish Sisodia has.

Ali also charged that the Central government has not done anything for the victims. “No one from the Central government has come. This has created more suspicion in the minds of the people. Neither home hinister Amit Shah nor defence minister Rajnath Singh have visited people here. On the other hand the Centre has provided ‘Y’ category security to Kapil Mishra, who made some hate speeches but was not arrested,” he insisted.

Among the other organisations which have set up camps here is the Delhi Commission for Women. Ajay, a representative of its Mahila Panchayat, said the camp was set up earlier this week. Prior to that, he said, the Commission was making arrangements for providing rations to the victims. “Soon after the riots we provided ration to about 1,000 families. We were gathering relief material with the help of donors and NGOs and providing it to those whose houses were burnt down. We were providing each one of them 10-15 days ration.”

The DCW has thus far set up five camps in the area, including at Shiv Vihar and Al Hind Hospital. At the Eidgah camp, around 20 people are being provided legal assistance per day. “We help people fill up the “legal help” forms for filing for compensation. Also, we assist them in knowing the status of their applications,” said Ajay.

Ajay also spoke about people approaching DCW regarding minors being picked up by the police. “Some people are coming to us with complaints that their minor children have being picked up. We try to get them information through the police,” he said.