Why Is the Police Stonewalling The Wire’s RTI Queries on the Delhi Violence?

The Delhi Police has not only refused to disclose information about the decisions made and the actions taken by it during the communal violence, it has not mentioned the grounds for refusal of information either, in violation of the RTI Act. 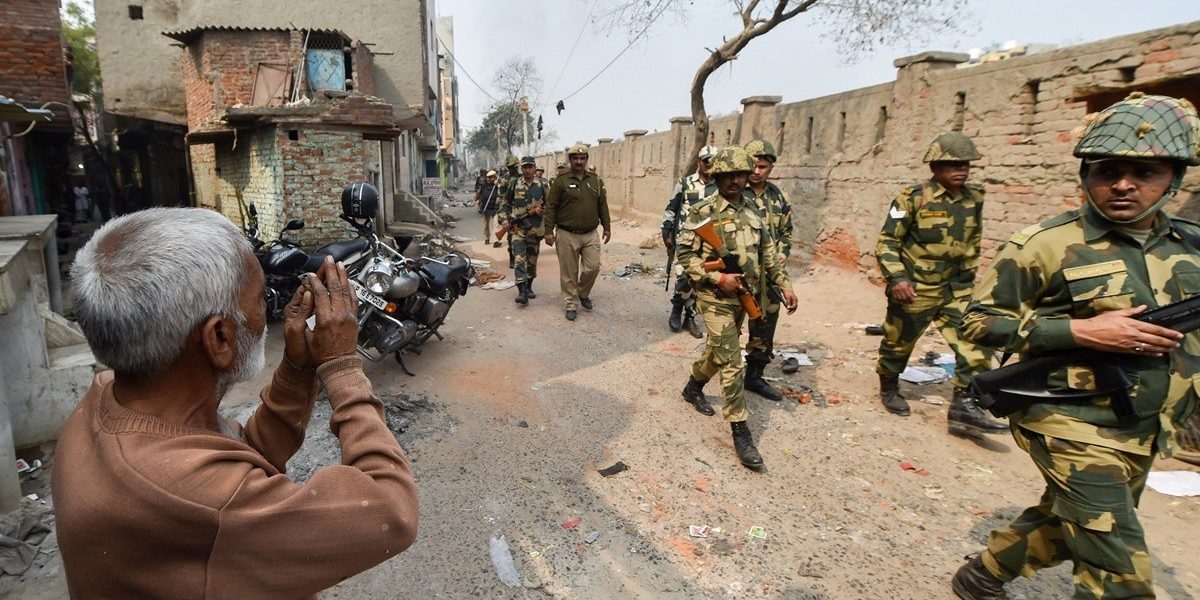 New Delhi: In February, one video that went viral on social media showed five young men, badly injured and lying on the roadside, being brutally beaten by policemen who were forcing them to sing the national anthem.

The video was shot in Kardampuri, a locality in north-east Delhi, on February 24, when this area of the national capital was aflame with communal violence. Two days later, one of the youngsters in the video, 23-year-old Faizan, died in hospital.

This wasn’t the only incident of its kind. There have been several complaints of police brutality during the communal violence that raged in north-east Delhi for three days, claiming the lives of 52 people, leaving more than 200 persons injured, destroying the properties of many and forcing thousands of Delhiites to become refugees in their own city.

One policeman and several Hindus also lost their lives in the violence, but it is members of the Muslim community who are the most affected.

Be it locals or journalists, social workers or security experts who visited the violence-hit areas, they were emphatic that the violence could have been stopped if the police had acted in time.

To corroborate the many questions being raised about the police, The Wire had filed several RTI applications for details regarding the decisions made and the actions taken by the police during the communal violence. However, by its unwarranted use of a section in the RTI Act that provides for exemption from disclosure, Delhi Police has refused to furnish significant information relating to the communal violence in north-east Delhi, saying it could put several lives in danger.

In addition, Delhi Police violated the 48-hour limit stipulated for replying to an RTI query regarding life and death, sending its unproductive reply after about 28 days.

Questions asked by The Wire under the RTI Act

The first one sought the names and age of the people killed and injured in the violence and their addresses, as well as the names and designations of the injured policemen and the nature of injury suffered by them. Queries pertaining to life and death have to be replied to within 48 hours.

The second RTI application sought a response to the following five questions:

However, taking recourse to Section 8 (1) (g, j and h) of the RTI Act, the Public Information Officer-cum-Additional Deputy Police Commissioner of Police, north-east district, Delhi, M.A. Rizvi, refused to give information on any of the questions asked by The Wire.

In his reply, dated March 30, Rizvi stated that according to the reports provided by all the SHOs/NED, as per Section 8 (1) (g,j and h) of the RTI Act, 2005, the information asked for could not be disclosed. 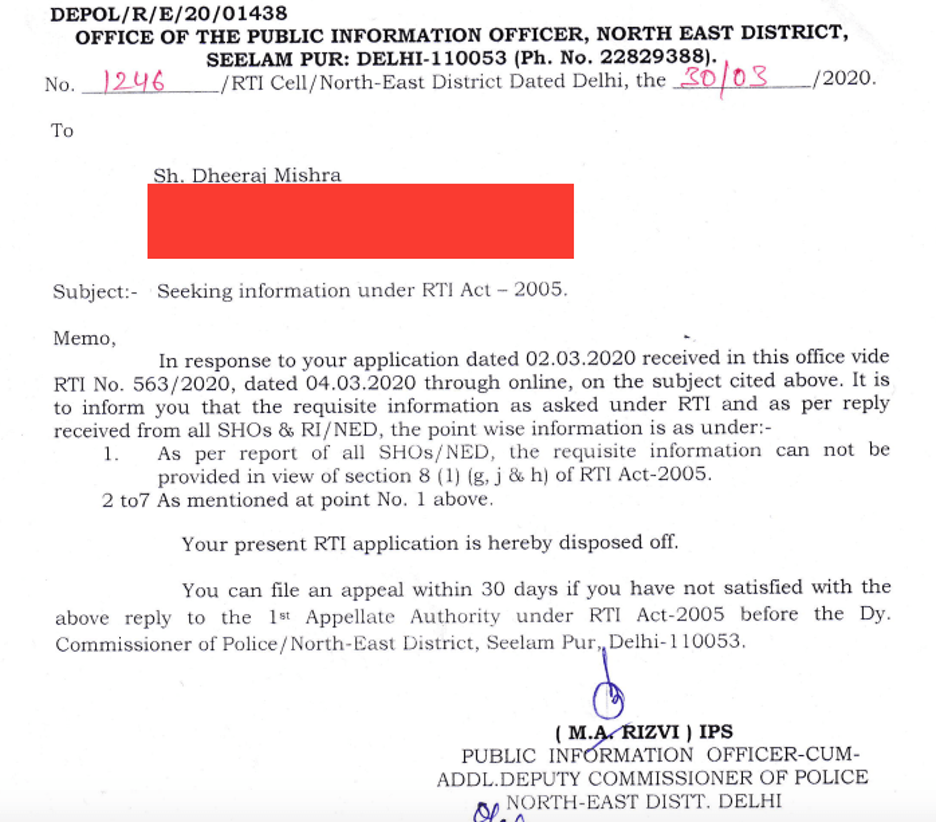 The Public Information Officer did not see it fit to explain as to how the information sought by The Wire falls within the ambit of a section of the RTI Act which provides for exemption from disclosure.

Not to mention the grounds for refusal of information is a grave violation of the RTI Act and several directives of the Central Information Commission, which state that any refusal to divulge the information asked for must be accompanied by a mention of the basis on which it is being done so.

Under Section 8 (1)(g) of the RTI Act, if the disclosure of information asked for is likely to put the life or physical safety of a person at risk, or if the information is such that it could expose the source of confidential information or assistance provided in matters of security, then such details are exempt from disclosure.

Under Section 8 (1) (h), if the disclosure of information asked for is likely to affect the investigative process or prosecution of an accused, then it is exempt from disclosure.

And, as per Section 8 (1) (j), if the information asked for is of a personal nature and does not serve public interest or would cause an “unwarranted invasion” of the individual’s privacy, then too it is exempt from disclosure.

But there is a proviso to this section – if that information cannot be denied to the parliament or state legislature, it cannot be withheld from a member of the public either.

The Wire has not asked for any information which could fall within the ambit of these sub-sections. Information pertaining to the total number of bullets and rubber bullets fired, water cannons used, and police personnel deployed in the violence-affected areas does not constitute ‘personal’ information by any stretch of imagination. Further, neither will this information affect the investigative process nor will it pose a danger to someone’s life.

Apart from this, information about the number of distress calls made by people to the police during the violence and the action taken by the police does not in any way come within the ambit of the three sub-sections of 8 (1). It is in public interest.

Although the FIR is a public document in itself, Delhi Police’s refusal to part with this information is baffling. As is the fact that it has decided not to provide The Wire with information about the number of people killed and injured in the communal violence, which several hospitals in Delhi have already made public.

In Rajagopal vs state of Tamil Nadu (1994), the Supreme Court in its decision had stated that personal information contained in a public document like the FIR does not fall within the ambit of privacy. The only condition being that if the FIR pertains to a case of sexual harassment or abduction of a woman, then her identity is not to be revealed. This decision has been maintained in the historic judgement a nine-judge Bench of the Supreme Court delivered in 2017 on the constitutional right to privacy.

Also read: Why the Public Looks at the Police With Disdain

When The Wire asked Public Information Officer-cum-DCP Rizvi as to why Delhi Police had refused to disclose information that it should be uploading on its website of its own volition, he replied, “I  have given you the information I needed to. If you are not happy with it, file an appeal. We will then see if information needs to be given to you or not.”

Certainly, Section 8 (1) of the RTI Act does provide an exemption from disclosure of information to do with various matters, but there’s a condition attached to it – if that information happens to be in public interest, it ought to be made public.

As per Section 8 (2), even if the information asked for falls within the ambit of Section 8 (1), i.e., exemption, “if the public interest in disclosure outweighs the harm to the protected interests,” such information will need to be disclosed by the official.

According to former Central Information Commissioner, Shailesh Gandhi, there is no basis for Delhi Police’s refusal to divulge the information sought by The Wire. As he sees it, the nature of the reply itself makes it obvious that it is an attempt not to give information. It is impossible to imagine how the kind of information asked for by The Wire could put someone’s life or safety at risk, he wonders.

The former CIC points out, “While communicating his refusal to divulge the information asked for under the RTI, the Public Information Officer should also have informed The Wire as to the grounds on which he had taken recourse to the sub-sections dealing with exemption of disclosure.  He has shown a great deal of arbitrariness in refusing to give information.”

It is important to point out here that Delhi Police has adopted the same stance with others who have filed RTI applications asking for similar information as The Wire.

Venkatesh Nayak, the head of the Commonwealth Research Initiative’s Access to Information programme, had asked for the following: the names of the people killed in the communal violence as well as those who have been arrested; a certified copy of the people shown arrested on the notice board of the police control room; the names of those taken into custody in various police stations while the violence was still on; the FIRs filed police station-wise; and the documents connected with the decision not to upload the FIRs on the Delhi Police website. However, Nayak received the same treatment as The Wire.

Nayak said, “The hospitals gave us information regarding the people killed in the violence, which had found mention in several media reports as well. I had asked for this information so that it could be confirmed whether the reports circulating in the media were accurate or not.”

He added, “As for those arrested and taken into custody, as per Section 41 C of the CrPC, that information ought to be made public. Nowhere in the CrPC is any exemption mentioned regarding this important matter. Not to give information about people in custody is a violation of the rights to freedom guaranteed under the Constitution.”

The RTI activist is emphatic that the RTI Act does not permit a Public Information Officer to say no to divulging information which, under the CrPC, should be made public by the police of its own volition.

The Wire has appealed against the response of the Public Information Officer to all the RTI queries filed by it.

Translated from the Hindi original by Chitra Padmanabhan. Read the Hindi version here.