Generally, police and security forces evoke fear and people want to create a distance from them. But not in north east Delhi, where Hindus seem eager to thank them for their services. 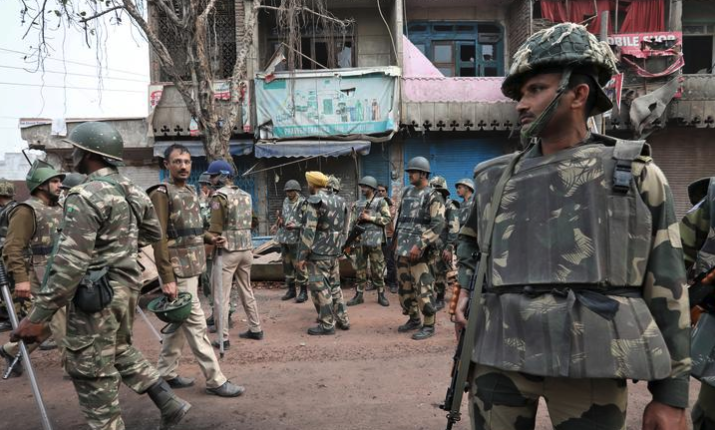 On February 29, two days after the violence in parts of north east Delhi had subsided, some of us who had formed a Citizens’ Collective for Peace, visited those areas. Crossing the iconic Signature Bridge, we came to the road leading to the localities that are now known as the “riot affected” areas.

As we moved towards Chand Bagh, Naveen pointed to a mazar (shrine) on the roadside, half-burnt and damaged by a violent mob which had selected mosques and madrasas as its main targets.

My mind went back to a road in Ahmedabad where, in 2002, I had seen a small patch covered by a chadar, with some flowers placed on it. It was the bulldozed mazar of Wali Gujarati which had been destroyed forever.

During my initial visits, I noticed autorickshaw drivers taking care to avoid that stretch of road as a mark of reverence to the razed mazar. That memory is now gone.

But, fortunately, this mazar of Chand Bagh has managed to survive. We saw some Muslims trying to rub the soot marks left by the fire that was lit in it by the attacking mob.

Our task that day was to deliver rations to the “riot affected” people in some of the lanes of Khajuri Khas locality who had been displaced by the violence and were left with nothing. As our car made a turn towards the road to Khajuri Khas we saw a landscape dotted with khaki and olive.

The jawans had a stern look in their eyes, but they did not stop us. We were somewhat hesitant to park our car where the CRPF men stood. It was decided that my associates would go into the lanes with the relief material and I would stay back.

I saw some shops that had opened for business as also several shops and business establishments that had been ripped open, looted and gutted. Close by was a crane lifting the mangled remains of charred vehicles, much like carcasses, before an audience of bystanders looking on without a trace of emotion on their faces. 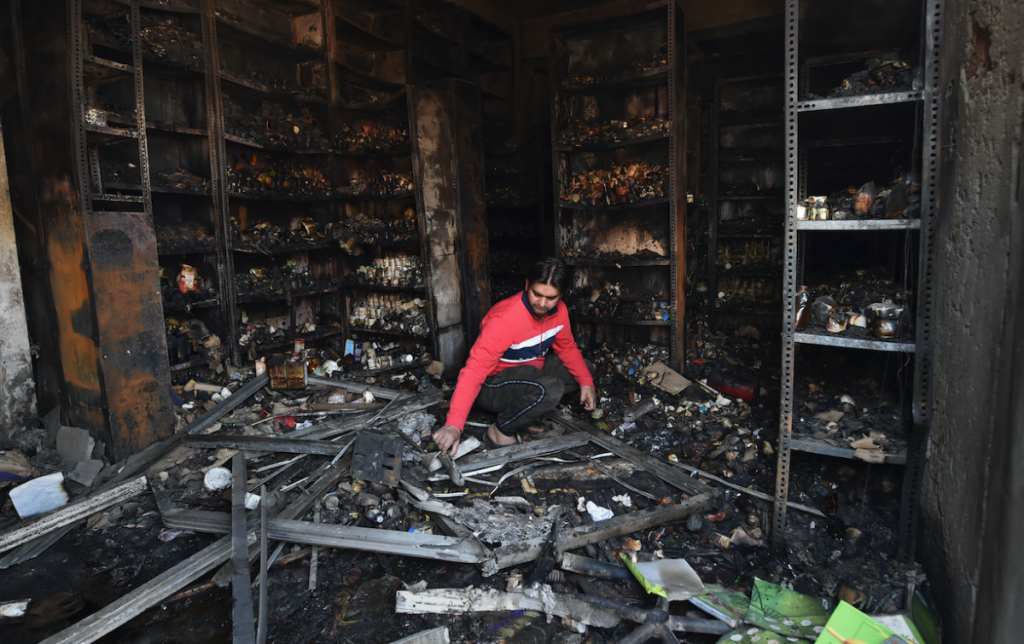 But these were not the most telling sights on the broken road of Khajuri Khas.

In that sombre atmosphere what grabbed my attention was a group of cheerful women, young and not so young, accompanied by men, moving around with flasks and polythene packs in their hands. My eyes followed them. One woman, who was older than the rest, approached a CRPF jawan with a smiling face. He was sitting on a chair on the footpath.

She poured tea from a flask into a cup and handed it to him.

There were other jawans there too; some were seated, others were on their rounds. She, along with her group, kept moving from one to the other, offering them tea.

I observed the happenings from a distance. One could see the initial reluctance of the paramilitary jawans but, ultimately, they did accept the tea. Their body language seemed to suggest that it was an unexpected act of kindness that had come their way.

Generally, police and security forces evoke fear and people want to create a distance from them, but this effort of a group of women and men endearing themselves to this arm of the state was a new experience for me.

Noticing our presence, the elderly woman briskly walked towards us. We were also offered tea. A thought crossed my mind that it was not meant for us and we should not take it, but the temptation of engaging her in conversation resolved this ethical dilemma. Her group gathered around my friends and me. I thanked her for the tea, and we started chatting.

“We were not the rightful beneficiaries,” I joked. “Was the tea not meant for those security people?” I asked.

She generously replied that since we also looked tired, she had felt the tea would do us good too.

“So, do you do this regularly?” I asked.

“We have to! These poor people are working day and night for us, after all. Had they not been here, god knows what would have happened to us,” she replied.

Clearly, she believed what she was telling us. We could see that she was a Hindu.

I responded: “So you feel safe with them around you.”

She said: “Of course! You had to be here on February 24 and 25 to feel the palpable air of violence. We could have been killed.” 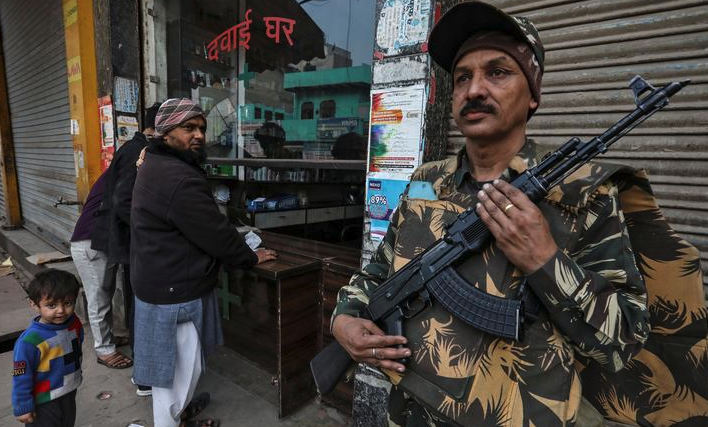 She owned a shop on that road. It was intact, open and doing business. Other shops on that side of the road, known in current parlance as ‘Hindu’ shops, had also been left untouched by the violence that had targeted mostly Muslim shops, looting, burning and destroying them completely.

Shops owned by Hindus but rented by Muslims had also faced the wrath of the attackers, but with a difference. The mob that had no compunction torching ‘Muslim’ shops had left the ‘Hindu-owned but Muslim-rented’ shops unburnt, confining itself to looting the Muslim shopkeeper’s stuff in it.

It was there for everyone to see that the only shops that were open on that day were those owned by Hindus; there were no Muslims to be seen before the remains of their shops.

I was therefore slightly taken aback that Hindus felt they were the real target of the violence.

I spoke to the woman: “But what we are seeing is Muslim houses and properties looted and burnt! Hindu shops do not seem to have suffered that kind of damage.”

She had a ready answer: “We were saved by these brothers.”

She pointed towards the CRPF personnel and continued: “There was no one, not even the Delhi police to be seen when we were under attack by them! In fact, it was only after Sudhir Chaudhary came and showed everything [on his television channel] that these people came to save us.”

She was trying to recall the name of the channel for which Chaudhary works.

We explained that Muslims had suffered more in the violence in her area as there was nothing left of their shops and houses, but she stuck to her point that it was Hindus who had been targeted and that their real loss was not being seen.

The following day we returned to the same area. The first thing I noticed was a group of young men pushing a cart laden with paper plates, cups and cooked food items. I took them to be a relief team, a group of good Samaritans who wanted to feed those who had been forced out of their homes and had lost everything.

My eyes followed the cart. It stopped before a CRPF man and one of the volunteers pulled out a plate for him. Others filled it with food items. Then the group moved to the next spot where the paramilitary jawans were standing.

I realised that the food and beverage cart was a community service for the CRPF men guarding the peace of Khajuri Khas.

Some of the CRPF jawans were reluctant to accept the goodies, but with a little cajoling the volunteers managed to break the ice. The gratitude for this act of kindness and brotherliness was writ large on the faces of the jawans.

This group of Samaritans was wholly male and slightly more formal than the group of women we had seen the previous day. The thought crossed my mind that they could well be members of some Hindu organisation.

One thought bothered me: should the jawans have accepted their food? Would it in any manner influence their behaviour towards Muslims?

Suddenly I noticed a bearded, middle-aged man who had stopped his scooter to talk to a CRPF jawan. I inched closer to where they were so that I could hear their conversation. What I overheard was the CRPF jawan telling the man, “But it was your brothers who killed him.”

I took the Muslim man aside and asked him what the conversation was about. He smiled helplessly: “The jawan was telling me that it was my co-religionists who had murdered Ankit Sharma, the Intelligence Bureau man.”

“How could he say that?” I exclaimed, and realised the foolishness of my question the instant I spoke.

“Well, how could I say that?” the gentleman replied. “It could have led to unpleasantness, you should understand,” he said.

A journalist friend who happened to be there, shared with me his exchange with a commandant of the CRPF who was tasked with maintaining order and peace in that locality. ‘How can you live with your enemies?’ he had asked my friend, leaving my friend in no doubt that for him the words enemy and Muslim were interchangeable.

But I had also come across a jawan muttering to himself, “Jo bhi hua, bura hua” (‘Whatever happened was bad’).

I shared what I had seen and heard with my friends. They told me that there was a campaign among Hindus that if they see policemen or paramilitary jawans in their locality or at their doorsteps, they should offer them tea and refreshments.

I remembered another gesture of support for the police, namely the slogan, “Dilli Police latth bajao, hum tumhare saath hain” (‘Delhi Police, let your lathis speak, we are with you’), popularised recently by frenzied Hindu mobs in Haryana and then in parts of Delhi.

I am perplexed. In this context, how should we read the acts of the women and men who went around providing tea and refreshments to the jawans in the Khajuri Khas area?

Should we read the acts of kindness as those of partisanship? Is this yet another instance of solidarity between Hinduness and the Indian state which is being seen as pro-Hindu and anti-Muslim?

Or am I reading too much into a humane gesture?