A magistrate in Delhi has remanded the young woman from Bangalore to five days police custody. The toolkit was shared by many including teenage climate activist Greta Thunberg, to aid those who wanted to help protesting farmers from afar, by organising their own peaceful solidarity actions. 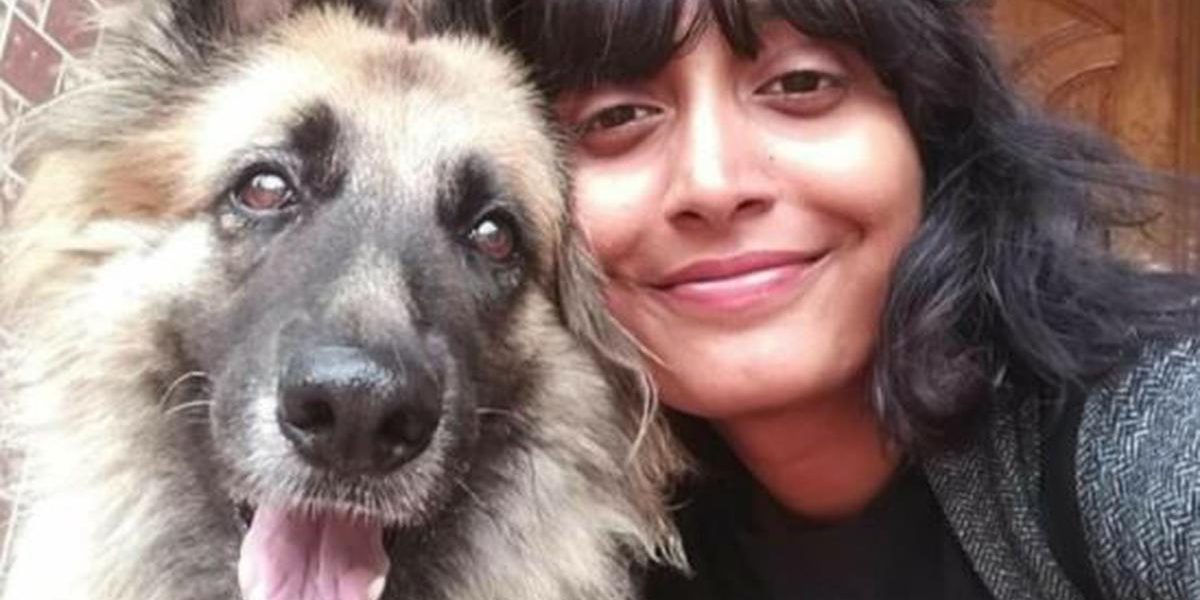 New Delhi:  In a move that has triggered anger and disbelief in equal parts, the Delhi Police on Sunday arrested a 21-year-old climate activist, Disha Ravi, from Bengaluru in connection with the sedition conspiracy case it has filed over a ‘toolkit’ activists aimed at organising peaceful protests in support of the ongoing farmers’ movement in India.

She was produced before a magistrate in Delhi, who remanded her to five days police custody. Till late Sunday night, neither the remand application nor order was made available to the media. Unusually, the FIR in the case has also still not been uploaded by the police though more than a week has passed since it was filed.

In a tweet, Delhi Police claimed Disha Ravi was a “key conspirator” in the “formulation and dissemination” of the ‘Toolkit’ and had started a WhatsApp group for that purpose:

Disha Ravi, arrested by CyPAD Delhi Police, is an Editor of the Toolkit Google Doc & key conspirator in document’s formulation & dissemination. She started WhatsApp Group & collaborated to make the Toolkit doc. She worked closely with them to draft the Doc. @PMOIndia @HMOIndia https://t.co/e8QGkyDIVv

However, the police has so far not explained what laws the Toolkit and its contents broke or why formulating and disseminating is not just a crime but an act of sedition.

Ravi graduated recently from the Mount Carmel College in Bangalore, and is one of the founders of the ‘Fridays for Future’ campaign in India, which focuses on combating climate change.

A lawyer familiar with the developments told Scroll.in that Ravi’s family had not been given any details when she was taken away – not even whether she was being arrested or detained for questioning.

During the court hearing, the police asked for seven days remand, with the public prosecutor alleging that the young woman was part of a “Khalistani conspiracy” – a charge the activist vehemently denied. “I was just supporting farmers,” she said, breaking down. “I supported farmers because they are our future and we all need to eat.” Ravi also maintained that she hadn’t authored the toolkit, but simply made two edits to it.

A criminal lawyer tracking the proceedings alleged that the court hearing took place despite Disha Ravi not being represented by counsel. 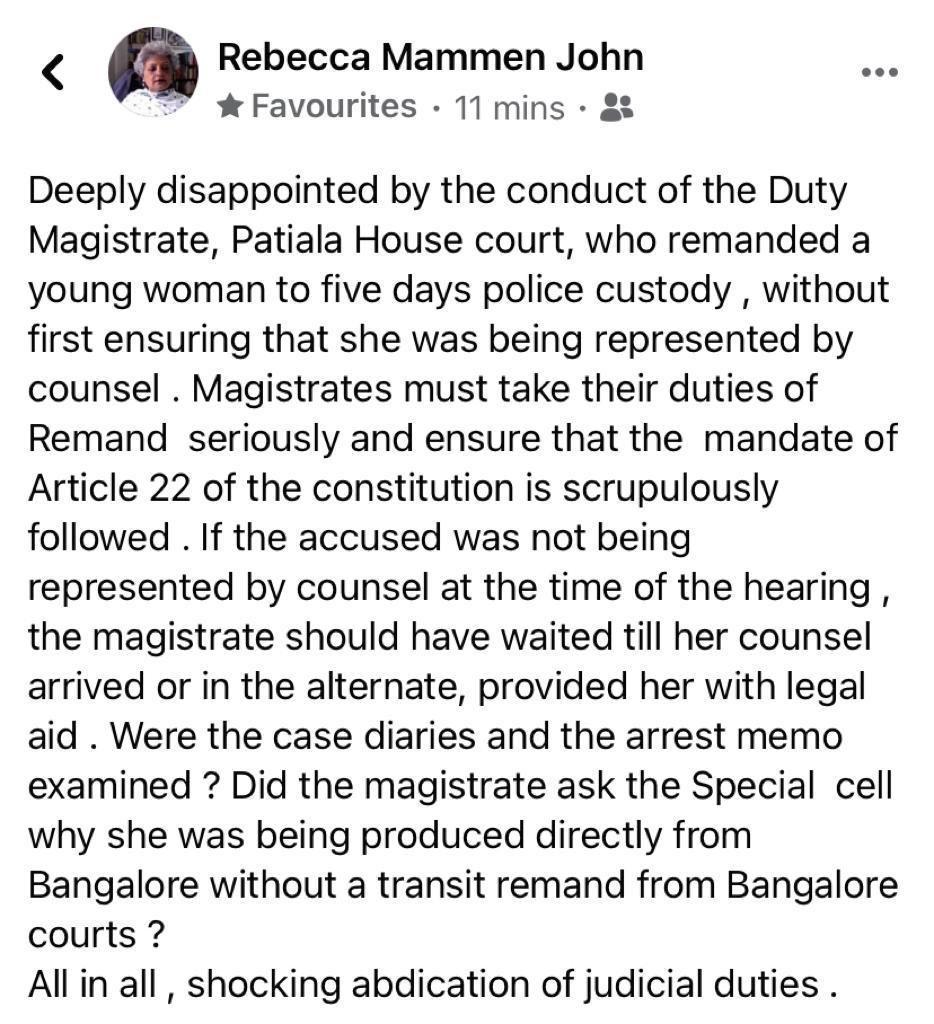 A police officer told The Hindu that Ravi was arrested and her phone and laptop seized because she had made changes to the toolkit and shared it on social media. “We have found that she made several changes in the toolkit related to farmers protest and further spread it in certain groups on social media,” the officer said.

This “toolkit” – which the police claims is part of a seditious conspiracy – was in fact a collection of articles, social media handles and information on the farmers’ protest, for anyone wanting to learn about the issue and spread the message.

Earlier, the Delhi Police had asked Google and some social media giants to provide information about email IDs, URLs and certain social media accounts related to the creators of the “toolkit” shared by teen climate activist Greta Thunberg and others on Twitter in connection with the farmers’ protest.

The Cyber Cell had lodged an FIR against unnamed “pro-Khalistan” creators of the “toolkit” for waging a “social, cultural and economic war against the Government of India”. The case was registered on charges of criminal conspiracy, sedition and various other sections of the Indian Penal Code, the police said.

According to the police, the “toolkit” has a particular section that mentions “digital strike through hashtags on or before January 26, tweet storms on January 23 onwards, physical action on January 26 and watch-out or join farmers march into Delhi and back to borders”.

As The Wire has explained in detail, a ‘toolkit’ is prepared for protests often, as it helps remote sympathisers access and participate in the movement, promoting strength in numbers. In a long-term movement, it can be assumed to be a successor of the pamphlet that delineates the ethos of the protest.

The fact that the government – including external affairs minister S. Jaishankar – is painting this toolkit as some sort of proof of conspiracy has been questioned by several experts. Retired IPS officer N.C. Asthana has written for The Wire about why the police’s claims are not made out, and its investigations into the matter do not make sense:

“Beyond the official hysteria and the media’s hype, the toolkit merely calls for mobilising opinion through social media, sharing solidarity photo/video messages, signing petitions and emails, etc. It also calls for a tweetstorm. This means a series of related tweets posted by a Twitter user in quick succession. None of these steps is an offence. Moreover, since it speaks of solidarity protests at or near Indian embassies, it suggests that the toolkit was designed primarily for foreigners or people living outside India.

As far as the January 26 farmers’ march is concerned, it calls to ‘watch out for or join it’. Given the fact that the rally was permitted by the police, there is no offence here even if the call of the toolkit’s authors were aimed at some Indian citizens.

…The toolkit, therefore on its face value, does not contain anything which could even remotely be linked to the sections used in the FIR. As far as the charge of criminal conspiracy is concerned, it must be kept in mind that expressing solidarity with something or giving advice for doing something is not synonymous with criminal conspiracy.”

Note: This article was updated with information from the court.