Out of Work, Poor Not Getting Rations, Information on Schemes: Food Rights Activists

In letter to Kejriwal, activists say that those without cards have not been covered under the free ration schemes this year, and with 10,000 SOS calls coming in, they request for a special helpline for those in distress. 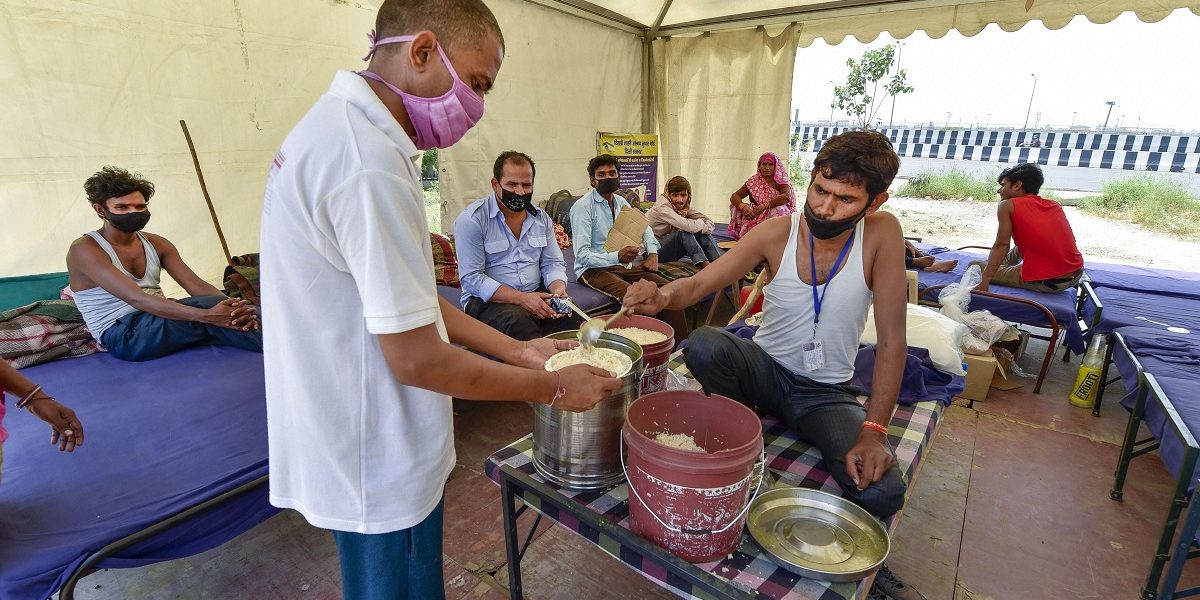 A migrant worker collects food at a temporary shelter home in Delhi, May 1, 2020. Photo: PTI/Vijay Verma

The Wire Staff
Government
Rights
10/May/2021

New Delhi: Food rights campaigners have accused the Delhi government of not distributing rations at the fair price shops for the month of May and excluding those without ration cards from the scheme of free rations. They have pointed out that while the Delhi government had distributed food grains and other essential commodities to nearly 60 lakh people without ration cards during the COVID-19 nationwide lockdown, this time during the second wave of the pandemic, when Delhi is under a lockdown, no such scheme has been rolled out.

In a letter to Delhi chief minister Arvind Kejriwal, the Delhi Rozi Roti Adhikar Abhiyan (DRRAA) stated that till May 7, the rations for the month had not been distributed despite citizens, especially the poor, facing enormous hardship due to the pandemic and the lockdown.

The DRRAA said this is adding to the economic distress of the poor who have lost their sources of livelihood during the lockdown imposed by the government to combat the spread of the virus. The delay in distribution of rations is forcing people to buy food grains in the open market at non-subsidised prices, it added.

The campaign also highlighted the need for ensuring food security for people, including migrant workers, daily wagers and other vulnerable groups, who do not possess ration cards. It demanded that the government immediately commence the distribution of subsidised food grains and essential goods to those who are not covered under the public distribution system (PDS) of the National Food Security Act (NFSA).

Lauding the “decision of the central government to provide 5 kg additional free ration per person per month under the Pradhan Mantri Garib Kalyan Ann Yojana (PMGKAY) and the decision of the Delhi government to provide regular ration free of cost for the months of May and June 2021”, the Abhiyan said, “taken together, the nearly 71 lakh priority ration card holders in Delhi are now entitled to 10 kg food grain per person per month free of cost.”

The food rights group said its activists and those of other groups have been visiting ration shops since May 1 to assess the status of ration distribution and documentation issues faced by people in accessing rations. During the visit to nearly 70 ration shops located across Delhi, the DRRAA said it was shocked to find that ration distribution for the month had not even started as the first week came to an end.

“This is alarming as Delhi is in the third week of lockdown. Those who have lost their livelihood are dependent on the food grains provided under the PDS to feed themselves and their families. The delay in distribution of rations is resulting in people being forced to purchase food grains from the open market at non-subsidised prices. At a time when people are dealing with an unprecedented health crisis and job loss, timely distribution of ration is critical to ensure food security,” the DRRAA pointed out.

The food rights group also stated that the full allocation of ration, including under PMGKAY, has also not reached the fair price shops. It said the distribution should have been started in a staggered manner while ensuring compliance with physical distancing norms and other COVID-19 protocols. “It is also a matter of grave concern that no information is available on the food department’s website, Delhi NFSA portal or outside ration shops regarding the schedule for ration distribution,” it pointed out.

As for the issue of the food security program leaving out those without ration cards in their hour of greatest need, the Abhiyan reminded Kejriwal that in its letter of April 16, 2021 it had highlighted the urgent need to provide rations to all persons in need, irrespective of whether they possess a ration card.

“The principle of universal coverage of food security programs during times of emergency has been repeatedly upheld by the Supreme Court and the Delhi High Court, including last year during the COVID crisis. Over the last few days, on account of the continuing lockdown the condition of daily wagers, migrant workers, residents of slums who do not possess ration cards has become even more precarious,” it said.

The group also pointed out that faced with hunger and starvation people have been making desperate calls for help. “Just as an indication of the hunger crisis, in the last few days, the DRRAA and other groups working on providing emergency rations have received SOS requests for foodgrains from more than 10,000 persons. In such a scenario, it is inexplicable why the government has not revived the e-coupon scheme, under which last year 60 lakh people who did not possess ration cards were provided free food grains,” it asked.

Other than the e-coupon scheme, the Abhiyan said, hunger relief centres providing cooked food were being run last year from more than 2,500 sites. But this year, it said they have only been started in a tenth of the places. “The setting up of hunger relief centres in only 250 places this year does not address the scale of the problem. Such centres are needed near construction sites, homeless shelters, bus stops, outside hospitals, train stations where people in distress congregate.”

The Abhiyan therefore urged the Delhi government to immediately start distribution of foodgrains to ration cardholders for the month of May without any further delay; and to ensure updated information is available on the website, outside ration shops and through helplines about the increased entitlement and schedule of ration distribution and ensure all relevant links on the portal indicating the current status of ration supply are functional.

It also demanded that rations be provided to all needy persons who do not possess a ration card by reviving the e-coupon scheme under the Mukhya Mantri Corona Sahayata Yojana or initiating any other programme/scheme for this purpose and an effective hunger helpline be launched with wide publicity to record all SOS requirements of food and rations and make provision to address the same.

Finally, the group has urged distribution of essential food items including oil, dal and sugar – along with rice and wheat – to all ration cardholders and persons in need.