Delhi’s Ongoing Food Security Challenge: What Went Wrong and How Can It Be Fixed?

The Delhi government had announced free ration support for those not covered under the PDS. However, within less than a week of implementation, the supply ran out at several distribution centres. As the ruptures of the second COVID-19 wave continue to have deep implications for livelihoods and food security of the city’s working class and migrant population, the Delhi government announced on May 18, 2021, free foodgrains’ support for those sections of the population who are not covered under the Public Distribution System (PDS). However, it was not until May 27, 2021 that guidelines for the scheme were issued, and its actual implementation reportedly commenced only on June 5, 2021. However, within less than a week of implementation, the supply of foodgrains ran out at several distribution centres, causing several to leave empty-handed, disappointed and worried about future availability. Some centres saw people queuing up as early as 2 am, hoping to gain quick access as stocks arrived.

What possibly went wrong? What could the Delhi government do to fix the situation?

Before we attempt to answer these questions, let us consider some key aspects of the scheme. The scheme intends to provide dry ration support free of cost to those who are facing food shortages in Delhi but don’t have access to foodgrains under the PDS i.e., those who don’t have ration cards. This “one-time relief measure” aims to provide assistance of 5 kg of foodgrains (4 kg of wheat and 1 kg of rice) to each beneficiary. The distribution of foodgrains is to occur at 280 centres (which are government schools), one in each municipal ward of the city. The guidelines mention that “the benefit of ration under this initiative will be provided to a maximum of two lakh beneficiaries at the initial phase and later as per demand and need assessment from the field, up to the maximum of 20 lakh beneficiaries.”

Too little, too late

Across the reported three days of distribution, that’s less than an average of 50 households/ families per day per distribution centre. Add to this the fact that there is only one distribution centre per municipal ward i.e. one centre for every 60,000 of Delhi’s residents; implying an average coverage of a mere 1.2% per ward. In comparison, as per data available on the Delhi government’s Food and Civil Supplies website, it provided temporary foodgrains support to more than 30 lakh unique beneficiaries, who did not have ration cards, during the 2020 lockdown. How then, did the Delhi government estimate the initial demand to be less than 1/15th i.e. less than 7% of last year?

Second, a cursory look at the city’s mobility patterns from Google data reveals that more people might have stayed in the city during the lockdown in 2021 in comparison to 2020, which was more unplanned and haphazard. It can be observed that compared to a similar baseline of pre-lockdown situation of 2020, mobility trends for workplaces and transit hubs dropped 15%-18% more at the onset of the first phase of the 2020 lockdown in comparison to the 2021 lockdown (Figure 1). This could indicate a potentially larger demand for food from the city’s migrants and working poor, already reeling under the cumulative effect of job losses and economic stagnation over the past year. Therefore, not only was the target of covering two lakh people initially too low – but the timing of the distribution, which coincided with the end of a seven-week lockdown, was also too late. Having lost their livelihoods during successive lockdowns and exhausted whatever little savings they had, the desperation for the foodgrains’ support – albeit delayed – was demonstrated when people in need began queueing at the distribution centres during very early morning hours.

However, given that each centre presumably had very little stock of foodgrains to distribute in comparison to the on-ground demand, many had to return empty handed. After hours of waiting, they were understandably filled with anger and despair on being told that there weren’t enough foodgrains for all.

How can the Delhi government fix the situation?

Even as the initial stock of ration for Delhi’s non-PDS population has reportedly run out, the Delhi government can still address the food shortage at this critical juncture.

First, the avenues for procuring foodgrains to augment the current supply are already established. The guidelines mention procurement of foodgrains for “20 lakh probable beneficiaries” from the “FCI [Food Corporation of India] at their Open Market Sale Scheme (OMSS)”. They further state that the assistant commissioners looking at non-PDS transfers can initiate the procurement process based on daily tracking of delivery at the state-level. This suggests that the Delhi government already has procedures in-place for the necessary procurement and it should begin distributing additional foodgrains without any further delay.

Second, the Delhi government can take lessons from its own data from the last years’ experience to inform its current relief efforts. For example, consider the data available from the Food and Civil Supplies department website on temporary ration distributed to the “non-PDS” population (Figure 2). For May 2020 alone, non-PDS ration was distributed to an average of 88,525 beneficiaries per day with the highest single day distribution occurring on May 21, 2020, that benefitted 142,241 people. In fact, during the second half of May 2020, this ration was distributed around 400 centres. Even for June 2020, during the “unlock” phase, the daily average beneficiaries of the non-PDS ration distribution numbered 49,784. With this evidence, it is not surprising that the foodgrains for two lakh people ran out within just a few days. 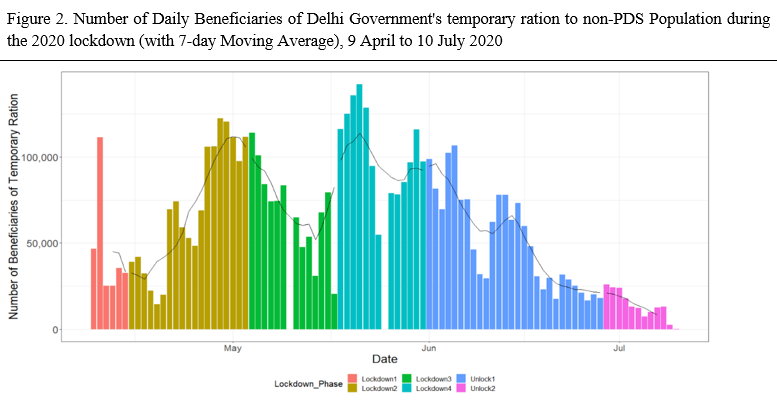 Source: Day-wise non-PDS reports from Delhi government’s Food and Civil Supplies department website. Note: Data was not available for May 10, 2020; and distribution did not occur on May 25, 2020.

Relatedly, the Delhi government’s 2020 food relief efforts also generated enough markers to understand the overall and spatially specific – at the district or sub-district level – demand for foodgrains in an emergency situation like the lockdown. Moreover, the 2021 guidelines also involve the labour department to “provide the list of clusters with the list of labours/migrant labours etc as surveyed by them”. They also indicate the scope for correspondence between the government and NGOs for data sharing in identifying beneficiaries through the labour department.

Third, last year’s experience also demonstrates that the Delhi government was able to utilise convergence across several departments in pursuit of distributing temporary ration to the non-PDS population at scale. A similar division of responsibilities is already mentioned in the current guidelines.

The Delhi government’s departments such as the Department of Food Supply and Consumer Affairs, the Delhi State Civil Supplies Corporation Limited, the labour department, the revenue department, and the Directorate of Education are assigned tasks at specific stages of the long process from procurement to distribution. The necessary convergence and coordination mechanisms exist and the government would do well to draw upon its past experience and strengthen these in the coming weeks as it responds to the situation.

The seven-week lockdown in 2021 has intensified the precarity of those whose livelihoods had perhaps only begun to recover from the shocks of 2020. Even as Delhi has started “unlocking”, one does not know how long it will be before people can find their way back into the urban informal economy. Ensuring timely, coordinated and sustained delivery of food security entitlements is imperative than ever before.

Eesha Kunduri is a PhD student at the University of Minnesota, Twin Cities; Shamindra Nath Roy is a senior researcher at the Centre for Policy Research, New Delhi; and Shahana Sheikh is a PhD candidate at Yale University. The authors gratefully acknowledge comments from Partha Mukhopadhyay and K.V. Prasad. Views expressed are the authors’ own.