With one of the highest undernutrition rates of children in urban areas, Delhi needs to tackle the issue of severely stunted children in the city who don't have access to proper infrastructure and facilities at local anganwadi centres.

New Delhi: It is an early summer morning in North Delhi’s Kabir Basti. A dingy and crowded lane of the settlement, with puddles from water leakages in broken pipes, opens up to a small structure – lying barely noticed, only recognisable by a shiny board which hangs in the crevice of two houses – the local anganwadi centre (AWC), a room with no windows, and no toilet facility.

The walls are bare without any storage space, and a large rug mat lies on the ground for children to sit. There are a few young boys and girls sitting, their knees touching each other with barely enough space for their hands to move. There is a muffled humdrum around, and they seem very fidgety. Soon, they inform us that they have come for private tuitions. The anganwadi rarely opens, they say.

Kabir Basti, nestled in Delhi University’s north campus, is a working-class settlement, home to mostly Muslims, who are migrant daily-wage labourers. With limited earnings, the people here rely heavily on government schemes like the Integrated Child Development Services (ICDS) to ensure a nutritious diet and pre-school education for their children.

Umair is playing with his friends in the vicinity. He is about five years old, and belongs to the age group of children who go to the AWC. Staying adjacent to the centre has had no benefit for him – he has rarely had a chance to attend. Asma, his mother, a woman in her mid-30s, confirms that there is no anganwadi worker in the centre and the helper does come regularly but only to distribute food.

“There is only one lady who serves food and goes, earlier they used to listen to stories, but, now for a long time they haven’t had anything happening there,” she says. Four of her three children who are below the age of six do not derive the full benefits of the ICDS entitled to them.

Asma’s husband adds that there has been no anganwadi worker in the centre for a long time now. When we spoke to him about the woman we met in the centre early this year in January, he said, “Yes, ammaji was also an anganwadi helper.” He recalled that ammaji had even looked after him when he was a child. “Ammaji could not read or write, but she had learnt so many stories and poems over the years that children have always adored her. Now that even ammaji is gone, all our children stay back at home.” 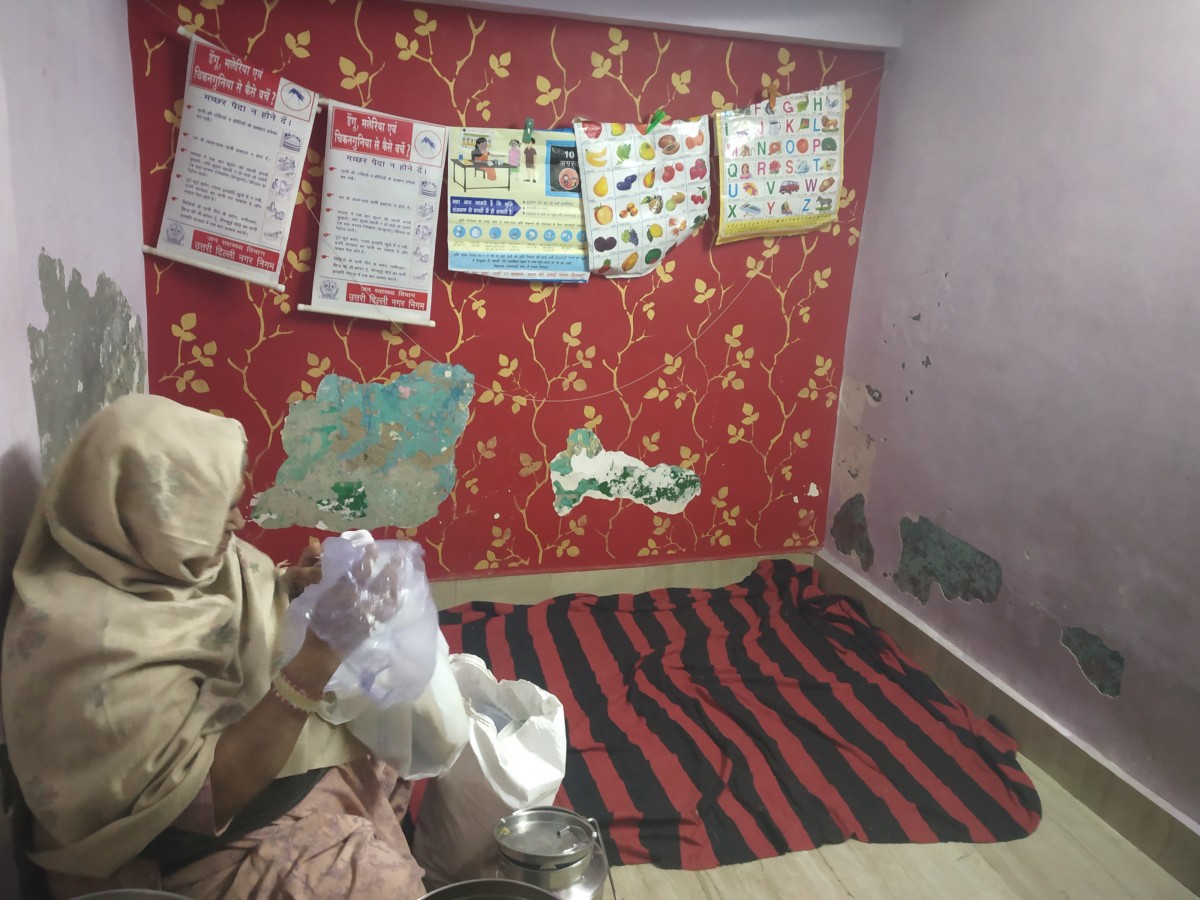 In a review meeting of the ICDS with district-level officers and CDPOs in November 2018, the Delhi Commission for Protection of Child Rights took cognisance of the shortage of staff at all levels. It was decided that they would take stock of the vacancies to work out a plan to fill them at the earliest. After more than six months, the problems of understaffing still continues to haunt/persist. In the absence of workers to take care of preschool education, it was found that girls in secondary school have been requested to informally fill for the role near Wazirpur Industrial Area.

Poor housing conditions and under-staffed AWCs aren’t an exception here. In Malkaganj and Chandrawal, the centres run in tiny rooms of 200 square feet, mostly by AWC helpers, and without basic facilities like drinking water, toilets, space for storing food.

Launched in 1975, ICDS is one of the world’s largest and most unique programmes for early childhood care and development, aimed to tackle the disturbing proportions of malnourishment, undernourishment, and anaemia amongst women and children in India.

A letter from the Union Ministry of Women and Child Development to the secretaries and chief secretaries of all states and UTs in 2012 clearly laid the guidelines stating that AWCs should have “separate sitting room for children/women, separate kitchen, store for storing food items and child-friendly toilets and space for playing of children and the space should be at least 600 sqft.”

Overriding the previous year’s declaration wherein the Ministry of Women and Child Development had refused to undertake the responsibility of construction of new AWCs, this letter pledged that two lakh AWCs were to be constructed during the XIIth Plan Period at a cost of Rs 4.5 lakh per unit, and also declared a sum of Rs 2,000 annually to be allotted for maintenance. In reality, however, these guidelines seem to have been long forgotten.

In Delhi, the task of finding space for the AWC rests on the anganwadi workers and helpers, not on the government. With a maximum limit of Rs 3,000 per month for rent, finding a suitable clean, safe and affordable space is a major challenge. The AWCs are usually dwellings of families, cramped with the belongings of the owners – unused pieces of furniture, trunks, bags, where people walk across, making it impossible for the children to be undisturbed.

Mahbooba Hussain, who has put her small room on rent to the Kabir Basti AWC, says that she heavily depends on her room. “My old mother-in-law cannot access the staircase to reach the room upstairs, she usually sleeps here, and hence it has to be emptied very soon when she goes out for a walk when the AWC opens,” she adds.

A worker in Malkaganj confirms this malaise, “It was difficult to negotiate with these owners to get even this small room. And when they finally did agree, they imposed a lot of restrictions on us. We cannot hang our charts and drawings on the walls. Makeshift arrangements are removed after every day after the sessions. We have to keep a guard that the children do not speak too loudly here. More importantly, we have to clean and leave this space by the allotted time.” 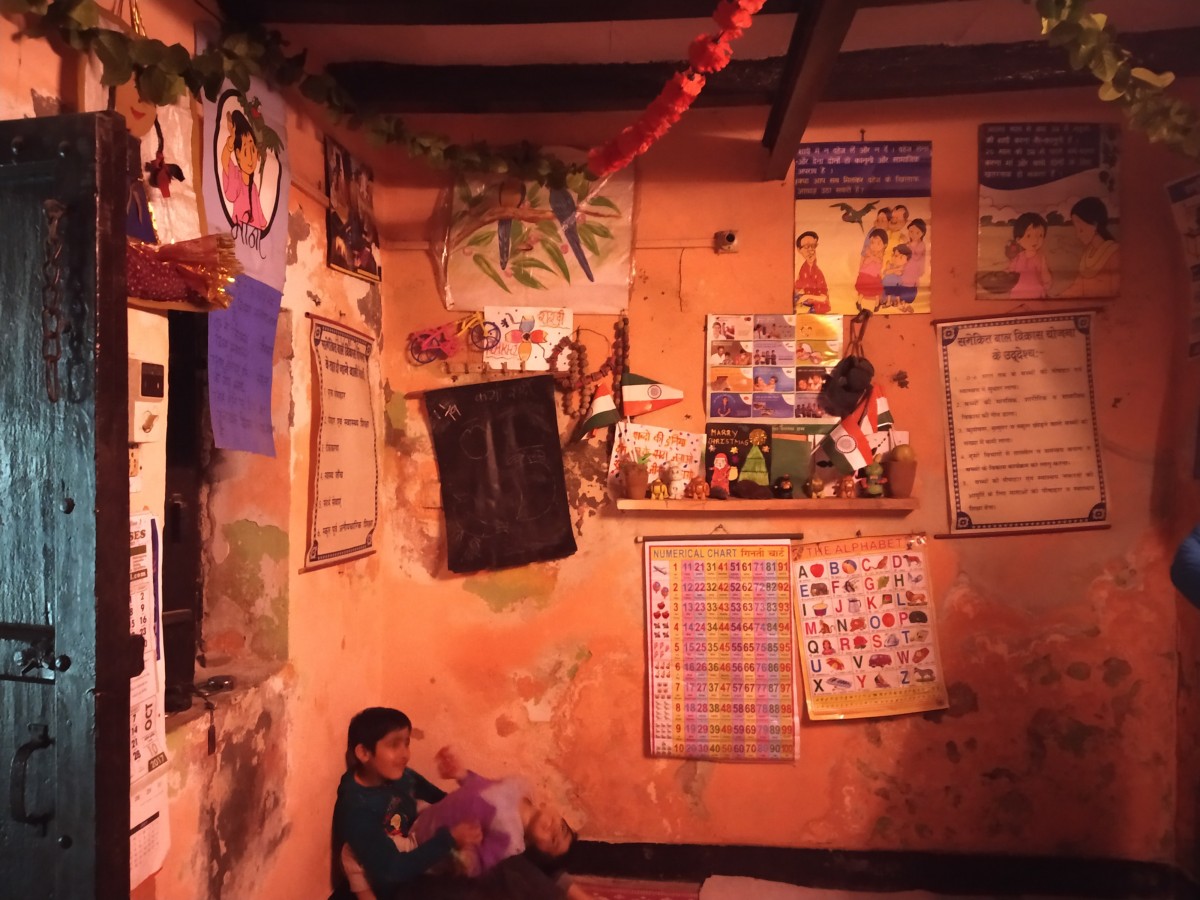 Most of the AWCs in Malkaganj were very dimly lit, with limited scope for ventilation. One of the anganwadis we visited seemed was lit with an orange night-bulb, an adverse condition for children to read.

In fact, an AWC in Chandrawal, under the Wazirpur project, was housed in an unused part of a cowshed, with a partition made, but the smell still lingered on. The helper had to repeatedly stand guard at the door to ward off the cows. “Cows keep trying to come, and then it’s necessary for us to stay alert throughout,” she said.

For the likes of Umair, and his siblings, the space-crunch and the infrequent opening of the local AWC means their pre-school education takes a severe hit. His father laments that if he had resources, he could have sent his children to a private crèche. “I have heard the crèches are bigger and have much better facilities,” he says.

Later, an anganwadi worker at another AWC confirmed the worsening conditions of government crèches, saying, “Here, we do not have enough slates, boards, or even toys for the children. How long can these children continue with old ones? I can’t expect a five-year-old to count beads or use building blocks. It is as if no one gives a thought about the necessary materials.”

While some AWCs have received the patronage of altruistic individuals and NGOs, most others still remain in an abysmal condition without the bare minimum facilities. As a helper explained, “We wait for these people to turn up here with toys and food for their celebrations or even to donate their extra belongings and then try to stock them up for an indefinite period of time.” She said it had been many years since the government sent them new learning materials. In the absence of systemic government interventions, the AWCs remain in the lurch with individualistic efforts alone.

These challenges continue to plague the AWCs and have only worsened over the years. The state government, however, has turned away from the ugly realities of a crumbling pre-school education and child nutrition facilities.

An official from the WCD ministry accepted the falling conditions of AWCs:

“Our centres were not in a good condition at all because of the rent restrictions. Children sat on a mat under a staircase or outside the building. What could they learn in a situation like that? The centres were known only as “khichdi-banane wale” centres instead of spaces of early childhood learning. By pooling together resources, workers have been able to find larger spaces without additional expenses.” 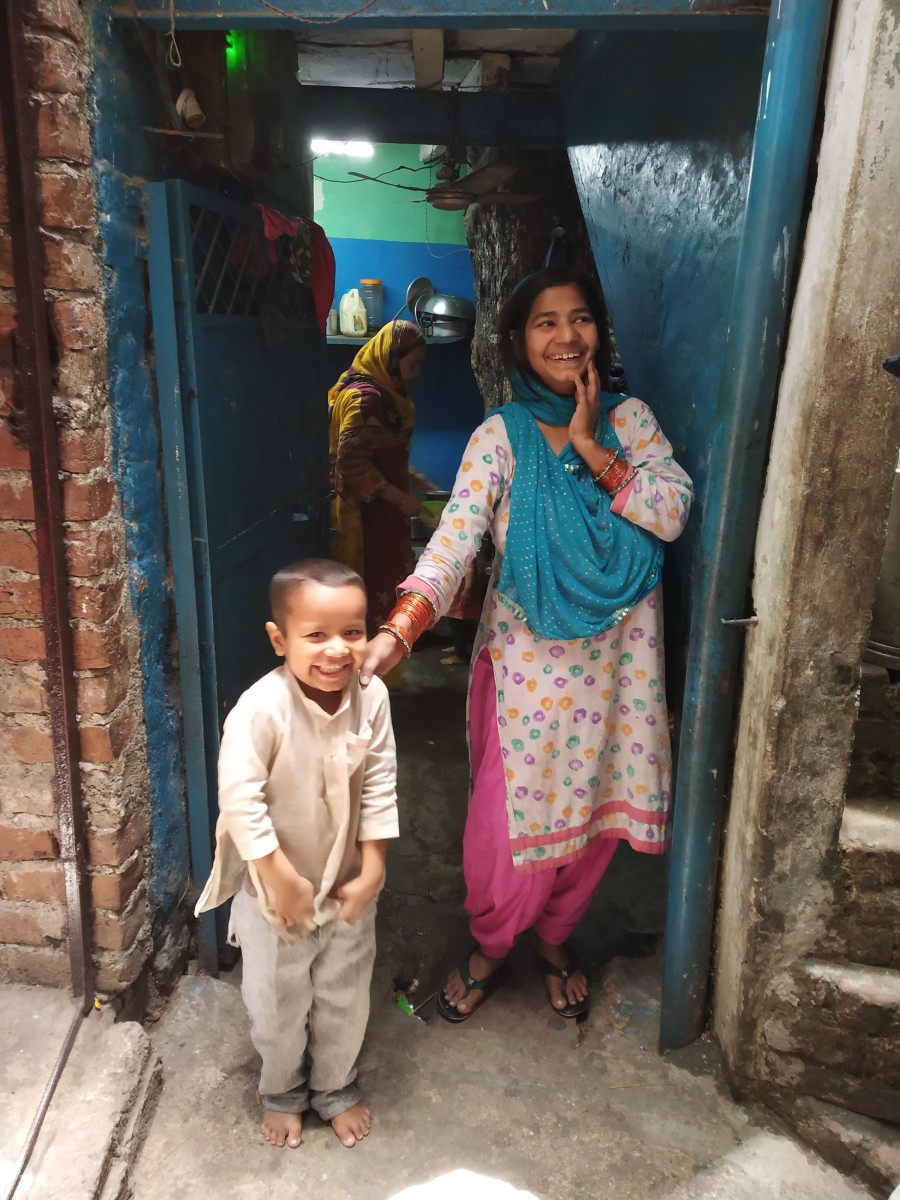 While this is, perhaps, a welcome change, there has been no report of a comprehensive plan of action. It is imperative to envision a change that includes all the AWCs in Delhi, which clearly still remain in a condition worse than what has been described as “khichdi banane wale” centres. The Delhi government often commended for its useful interventions in education, recently started 101 hub-centres, or mohalla playschools, in December 2018.

The food supplies in the AWCs is prepared in around 500 kitchens run by self-help groups attached to about 20 NPOs. Each kitchen caters to about 30 AWCs, and has a weekly menu. The workers we spoke to, however, admit that the food almost always tastes just the same.

On almost all visits, it was noticed that the children were not keen to consume the food supplied to the AWCs. A worker recollected that a pregnant woman once refused to take the food saying, “Why would anyone want to eat khichdi so often? I am pregnant, not sick!” The food is generally very unpalatable. Even the halwa is unappealing as it seems to have neither sweetness nor ghee.

Also read: Is the Government Planning to Dismantle the ICDS Programme?

In March 2019, the Delhi Government declared that it was in the process of bringing about a complete overhaul to improve the food supply. The number of kitchens shall now be reduced to only 50, with a bigger area of operation and constant CCTV surveillance. More importantly, the State government said that it might add milk and eggs to the food supply to tackle malnutrition.

Delhi has one of the highest undernutrition rates of children in urban areas, at a staggering 11.7% of its children severely stunted. Moreover, last year, three young children died of starvation, of which two children didn’t have access to AWC. While the current Delhi Government has made some very commendable promises for school and university education if full statehood is achieved post-elections, even with such precarious conditions of children, there seems to be no intention of a much-needed overhaul of the ICDS.

Abinash Dash Choudhury is an independent writer and activist working with Right to Food Campaign and Sweta Dash is pursuing Masters in Gender Studies from Ambedkar University.