Touted as a mega event, the Kamdhenu Gau-Vigyan Prachar-Prasar Examination will take place online on February 25. 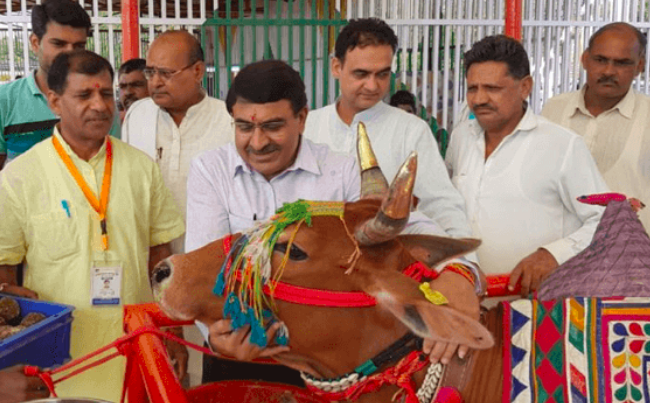 New Delhi: The government body set up for cow welfare, Rastriya Kamdhenu Aayog, is set to organise a countrywide online examination on February 25. The subject is cows.

The exam, called the Kamdhenu Gau-Vigyan Prachar-Prasar Examination will have separate papers for four categories of examinees, three of which are divided according to the stage of education – primary and middle school, secondary, college – and one for the general public. Answering the objective multiple-choice questions will earn examinees a certificate.

Although it is not known how deeply government school authorities will be mobilised to encourage students to answer the paper, the exam will come at a time when students who have already had a nine-monthlong gap from physical studies will be that much closer to their end-of-term examinations.

However, it is the study material for this exam released by the RKA that emerges as the most interesting aspect of this initiative. In addition to promises of more blog posts, videos and material, the RKA has released a 54-page PDF file for download at its website.

Worded much unlike text books and at a vast dissonance from government communications, the ‘syllabus’ makes claims that range from the occurrence of earthquakes due to cow slaughter to Jersey cows not being as emotive as Indian cows. For a document that aims to offer help for an exam which has ‘vigyan’, or ‘science’ in its name, there are few citations.

The document covers the usual suspect of subjects, including but not limited to the Vedic significance accorded to cows, their mention in ancient texts, the five big contributions that cows make to humankind (milk, ghee, curd, urine and dung), how cows as a species can be better fed and taken care of, how many kinds of cows there are in India and where they can be found.

While making a distinction between ‘desi’ cows and what it calls ‘exotic’ cows, the document attempts to illustrates with little reference or reason that in every aspect from health benefits of cow byproducts to overall demeanour, the former is a superior.

“The quality of milk is not at all good, but the quantity is more,” it says of the Jersey cow.

It also says the colour of Indian cow milk “is light yellow as it has traces of gold in it” (which the Jersey cow does not have). Gold is a metal and reported findings of Junagadh Agricultural University researchers to this effect have been hotly contested.

The syllabus also claims that Indian cows are hygiene-maintaining, “hardy and clever enough not to sit at dirty places” whereas the Jersey cow is lazy and prone to diseases. In a remarkable leap of blaming the cows themselves for their diseases, the document says, “It has also been seen that they attract infection by not being hygienic enough.”

In differences which run to 38 points (some of which are repeated), one of the more strange lines runs thus:

“Whenever any unknown person comes near desi cow, she will immediately stand.” 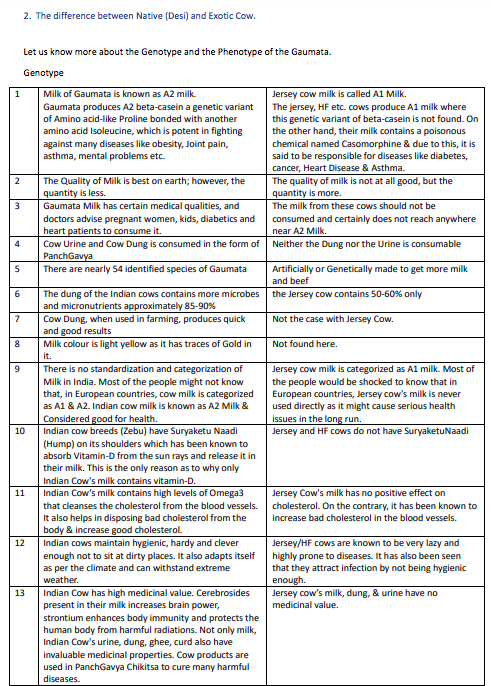 A section of the syllabus of the RKA exam.

The syllabus more than once makes claims of nearly all diseases getting cured by a cow byproduct or five. From acting as an infant milk substitute to being a ready cure for psoriasis, the syllabus also illustrates how cows of specifically coloured fur can help solve specific health problems, some quite serious.

In addition to offering recipes of how to create the perfect mix of cow byproducts to spray on crops, the syllabus discusses individual benefits of each. Where it deals with cow dung, it makes the claim:

“In 1984, more than 20,000 people died due to gas leaks in Bhopal. People living in houses with cow dung coated walls were not affected.”

In places, the syllabus is informative and offers a glimpse into what constitutes as optimal care of animals and their surprising variety. It also highlights that the solutions available in a cow act as a veritable counterpoint to global warming and a destructive consumerism humans otherwise indulge in.

However, the document veers near its conclusion into overtly simplistic assertions that read more like propaganda than information. A case in point is the following paragraph:

“Africans for thousands of years used cow dung cakes as fuel. In 18th and 19th century missionaries taught them to give up this ‘uncivilized’ practice. People turned to forests for fuel and in no time the continent was bald.”

It brings up karma as a deterrent for cow slaughter for beef consumption and ultimately ends with an entirely unsubstantiated and unscientific claim linking cow slaughter to earthquakes.

“Physicists M M Bajaj, Ibrahim and Vijayraj Singh have proposed the theory that animal slaughter and natural calamities like earthquakes have an interrelationship and research papers on this theory have been presented in many international conferences. The theory presents the hypothesis of large-scale abattoir activity as the causative agent for major earthquakes.

It is unlikely that the writers of the syllabus assumed that students excepting those interested in the sciences would be able to glean much from the above. The hypothesis appears to be that the stomping of feet of animals to be slaughtered is being assumed to produce seismic waves. The argument can be found between pages 43 and 44 below.

RKA syllabus by The Wire on Scribd


While the contents of the document offer a journey into grey facts, cows in India – under the same dispensation that established the body that brought out the syllabus – have become an excuse for brutal violence and lynchings perpetrated by Hindutva vigilante groups.