When COVID-19 Tests Focus on Swabs, Are Patients With Rarer Symptoms Missed?

Case reports from around the world indicate that in a few cases, COVID-19 can affect the brain, the central nervous system and even the heart. 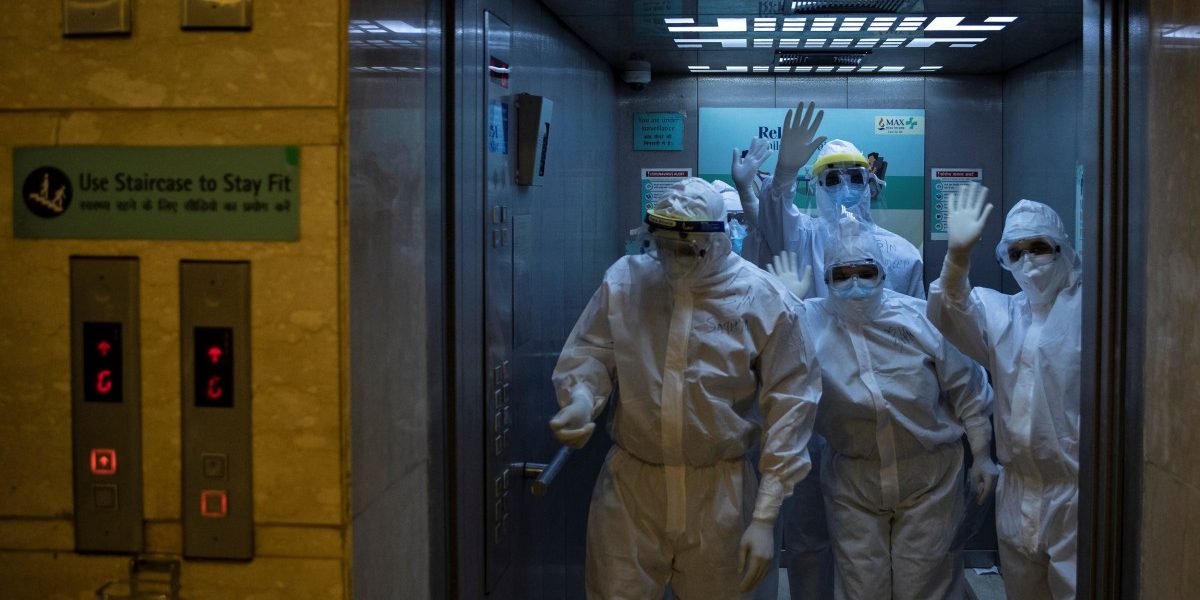 Medical workers in PPE gesture as they arrive at the ICU treating COVID-19 patients at a Delhi hospital. Photo: Reuters/Danish Siddiqui

New Delhi: Shaily Bansal’s death certificate lists three causes: acute meningoencephalitis, stress cardiomyopathy and shock. Shaily was a 23-year-old Delhi Police constable, and had been in service for two years. Posted at the Nand Nagri Police Station, she was on duty when she fell sick. She passed away at Jaypee Hospital in Noida on May 25.

According to her brother Kapil, Shaily had been admitted to the hospital after she developed a high fever. There, she tested negative for COVID-19 – twice.

Kapil has alleged that even after his sister tested negative, the hospital kept her in isolation without telling her family members, including himself, why. This is why, according to him, he and his relatives have trouble believing COVID-19 might not have had a part to play in Shaily’s death.

Their doubts were reinforced when, from May 7 to 11, four of Shaily’s co-workers at the police station tested positive for COVID-19: constables Bhupender, Pavan and Kuldeep, and station house officer Avtar Singh Rawat.

According to Dr Harjit Singh Bhatti, former president of the AIIMS Resident Welfare Association and a doctor familiar with the matter, some Shaily’s cerebrospinal fluid (CSF) was extracted at Jaypee Hospital but wasn’t tested for any bacterial or viral infections. Ideally, according to him, it should’ve been, especially since Shaily was an essential worker.

Dr Bhatti speculated that she could have been experiencing some of the rarer symptoms COVID-19. In this case, he said, the viral infection could have the outer layer of the brain, called the meninges, to inflame, leading to meningoencephalitis. “There is written literature on this,” he said. “An autopsy was also not done.”

Common and rare symptoms of COVID-19

According to the WHO (as of 7 am on June 5), the most common symptoms of (symptomatic) COVID-19 are “fever, dry cough and tiredness”. Less common symptoms include “aches and pains, sore throat, diarrhoea, conjunctivitis, headache, loss of taste or smell, a rash on skin, or discolouration of fingers or toes”. Finally, serious symptoms include “difficulty breathing or shortness of breath, chest pain or pressure, loss of speech or movement”.

However, case reports from around the world indicate that even if these are the common symptoms, they’re not always the only symptoms.

According to one case report published in early April, a 24-year-old man in Japan had been diagnosed with “aseptic encephalitis with SARS-CoV-2 RNA in the CSF”.

Another case report published on April 23 also reported a correlation between myocarditis and SARS-CoV-2 in a 69-year-old man from Italy.

According to Dr Bhatti, cardiomyopathy – listed as one of the causes of Shaily Bansal’s death – is caused by a viral infection, and it could have been caused by SARS-CoV-2.

Also read: The Wages Of COVID-19 Lockdown In Dharavi – A Sense Of Panic, Loss Of Self

However, speaking to The Wire, a noted epidemiologist said many viruses could cause meningitis and myocarditis, so without proof, it was hard to say if Shaily had died of COVID-19. “We have to go by what’s written in the death summary. If the doctor is lying, we have to go by the lie,” he said.

A senior doctor at AIIMS said on condition of anonymity that only details of how Shaily’s could have got the virus could definitively say whether she had COVID-19. However, he added, “Her exposure history to a known case of COVID-19 is not given anywhere [in her case report], so we don’t know of her exposure status.”

However, he also said “COVID19 cannot be ruled out conclusively. Even with a negative RT- PCR test, patients may still have a coronavirus infection, especially [in the central nervous system].”

In a letter to Delhi Chief Minister Arvind Kejriwal, which The Wire has read, Shaily’s brother Kapil wrote, “By simply saying that my sister died of a brain fever, the administration is trying to escape their liabilities. My sister should be called a martyr who died in the line of duty, and her family must be provided with adequate and necessary help and support.”

On April 18, Chief Minister Kejriwal announced his government would provide Rs 1 crore as compensation to the kin of all frontline workers who die of COVID-19. The next day, his government expanded the eligibility criteria to include the families of all essential workers, such as civil defence personnel, teachers, police and fire-station workers.

The mathematician Murad Banaji wrote for The Wire about how Delhi’s decision to change the way deaths due to COVID-19 are counted, in May, could have improved its mortality figures on paper.

Additional commissioner of police and head PRO of Delhi Police Mandeep Randhawa told The Wire that there were no additional criteria to provide compensation to the kin of the deceased. It is only “death due to COVID-19”.

Bansal’s family lives in Gautam Buddh Nagar in the national capital. They are poor and have now lost their sole breadwinner. They suspect Shaily could have died due to COVID-19. However, since the doctors didn’t perform tests to account for all possible symptoms, instead of an infection in the nasopharynx, they have no way to prove or disprove it.

On June 5, The National Human Rights Commission (NHRC) issued a notice to the commissioner of Delhi Police, the District Magistrate of Gautam Buddh Nagar and the Chief Secretary of NCT Delhi in the matter of Constable Shaily Bansal.

In the notice, the NHRC has asked them to submit a report in the matter, within four weeks. Failing this, the “commission shall invoke [the] coercive process under section (13) of the Protection of Human Rights Act 1993”, the notice read.